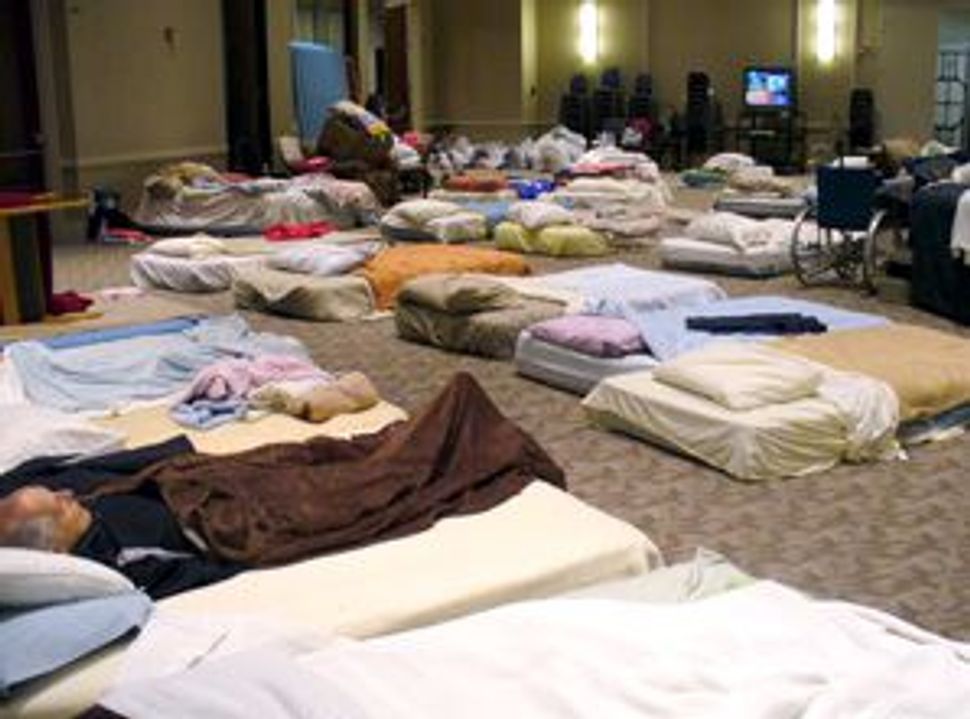 Encinitas, Calif. – As last week’s wildfires tore through Southern California, forcing hundreds of thousands from their homes, one group of evacuees managed to have a good time in spite of it all. 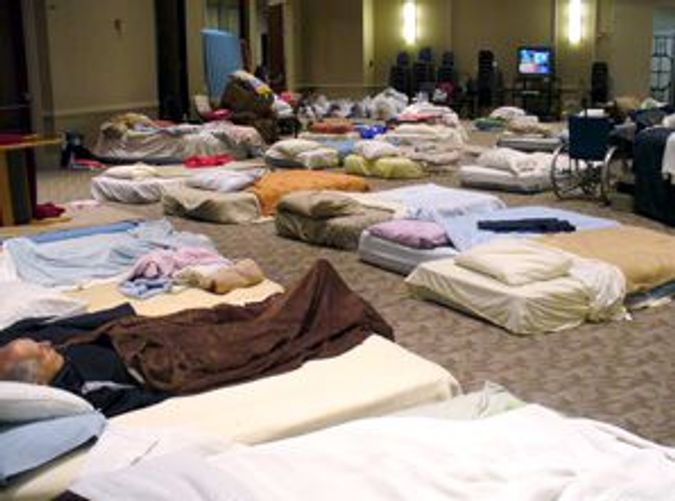 Amid the chaos wreaked by the inferno, more than 100 Jewish seniors — including a plucky 101-year-old — fled their San Diego-area retirement communities to a synagogue in nearby La Jolla. With the help of the congregation, the group’s two-night stay in the synagogue’s social hall turned into what many of the elderly evacuees described as a good old-fashioned pajama party.

Residents of two homes for aging Jews, the Seacrest Village at Encinitas and the Seacrest Village at Rancho Bernardo, located in Poway, were forced to flee their homes soon after October 21, when the Witch Creek fire began. But what could have become a nightmare instead turned into a Jewish professional’s dream of a community functioning at its best: Congregation Beth Israel, a 1,300-family Reform synagogue, opened its doors to the Seacrest residents, who slept on couches, chairs and mattresses strewn across the floor of Beth Israel’s 5,000-square-foot social hall. Within minutes of the evacuees’ arrival, the congregation’s teenagers appeared in droves to comfort their elderly guests, while the synagogue band regaled them with Yiddish folk songs, Hebrew melodies and even a few show tunes.

“I have to report it was a wonderful couple days’ vacation,” mused one 85-year-old Seacrest resident, Sybil Brown, sitting in the café at Seacrest Village at Encinitas. The café overlooks a palm-tree-lined putting green that, like the two facilities, was ultimately unharmed by the fire.

The quaint community, with its sunlight-dappled red-tiled roofs, is a haven for aging Jews. Along with the complex in Poway, Seacrest Village is owned by San Diego Hebrew Homes, a not-for-profit company established in 1944 to provide services to elderly Jews in the area. Today, the organization provides roughly $1 million a year in subsidies to residents. The majority of its funding comes from private donations, its own foundation and an allocation from the United Jewish Federation of San Diego County, the umbrella organization for the region’s 100,000 Jews.

Fueled by the merciless Santa Ana winds, last week’s wildfires barreled through Southern California, displacing 550,000 people in San Diego County alone. The Witch Creek fire — which burned nearly 200,000 acres, becoming the fourth largest blaze in California history — neared Seacrest’s Rancho Bernardo facility October 22, the day after it broke out. Some families came for their loved ones, but the remaining 37 residents were forced to board buses and make the 40-mile trip to Seacrest’s Encinitas facility. With their medications, medical charts and a few sundry items packed in bags, the seniors arrived in the northern San Diego city, thinking they’d found safety.

Within hours of their arrival, it was clear that Encinitas, situated some five miles from the edge of the flames, was also threatened by the blaze. Upon learning that their residents might be evacuated at any moment on only half an hour’s notice, administrators at Seacrest Encinitas decided that given a population with a median age of 87 — more than half of whom live in an Alzheimer’s unit and at an on-site health care facility with round-the-clock nursing care — the wisest choice would be to leave immediately.

In an interview at Seacrest Village, Pam Ferris, president and CEO of Seacrest Village Retirement Communities, said that she and other administrators made the decision to leave early “so that the chaos could be organized.” After calling around to senior centers across Southern California, Ferris managed to find temporary beds for the Rancho Bernardo residents at Heritage Pointe, a Jewish old-age home in Orange County. The most infirm were sent to a skilled nursing facility in Santa Ana, about an hour away. The remaining Seacrest residents landed at Congregation Beth Israel, much to their delight.

“The entertainment was marvelous,” quipped Sylvia Zuckerman, an 80-year-old who moved to Seacrest in 2004 after a five-year stint in Jerusalem. Zuckerman, a Brooklyn native, also told a reporter that at age 12, she penned an article for the Forverts.

Ferris said that while Jewish Family Service, the agency tasked with coordinating relief efforts for the San Diego Jewish community, offered assistance, in the end it was Congregation Beth Israel that had enough space to accommodate all 126 seniors who needed a place to stay. And, according to Ferris, the synagogue reacted swiftly and with open arms. “It took one phone call, one request and one returned call that said, ‘Come ahead. Stay as long as you want,’” she said.

Upon arriving at the sprawling, three-acre campus built from mortar resembling Jerusalem stone, the Seacrest residents and some 35 staff members that attended them — including the vice president of finance, as well as hairdressers and housekeepers — were warmly greeted by Beth Israel’s two rabbis, its cantor and a host of volunteers. Michael Berk, the congregation’s senior rabbi, had sent an e-mail prior to the seniors’ arrival, requesting volunteers and — most urgently — beds. In the meantime, Berk’s own couch was moved into the social hall from his office. By the second night, however, a Seacrest board member who owned a furniture company had 60 mattresses delivered to the temporary shelter.

Congregation members helped prepare meals in the synagogue’s industrial-size kitchen, while teenagers who had been given the day off from school listened to their elders’ World War II stories. The synagogue’s custodians also chipped in, cleaning bathrooms all through the night.

Because the unexpected operation ran so smoothly, Berk is now considering registering the synagogue as a disaster-relief shelter to be used in future emergencies. This time, however, there was no planning involved.

“It was a typically Jewish reaction,” Berk said, “which means you do the right thing, and then you figure out how to manage it.”