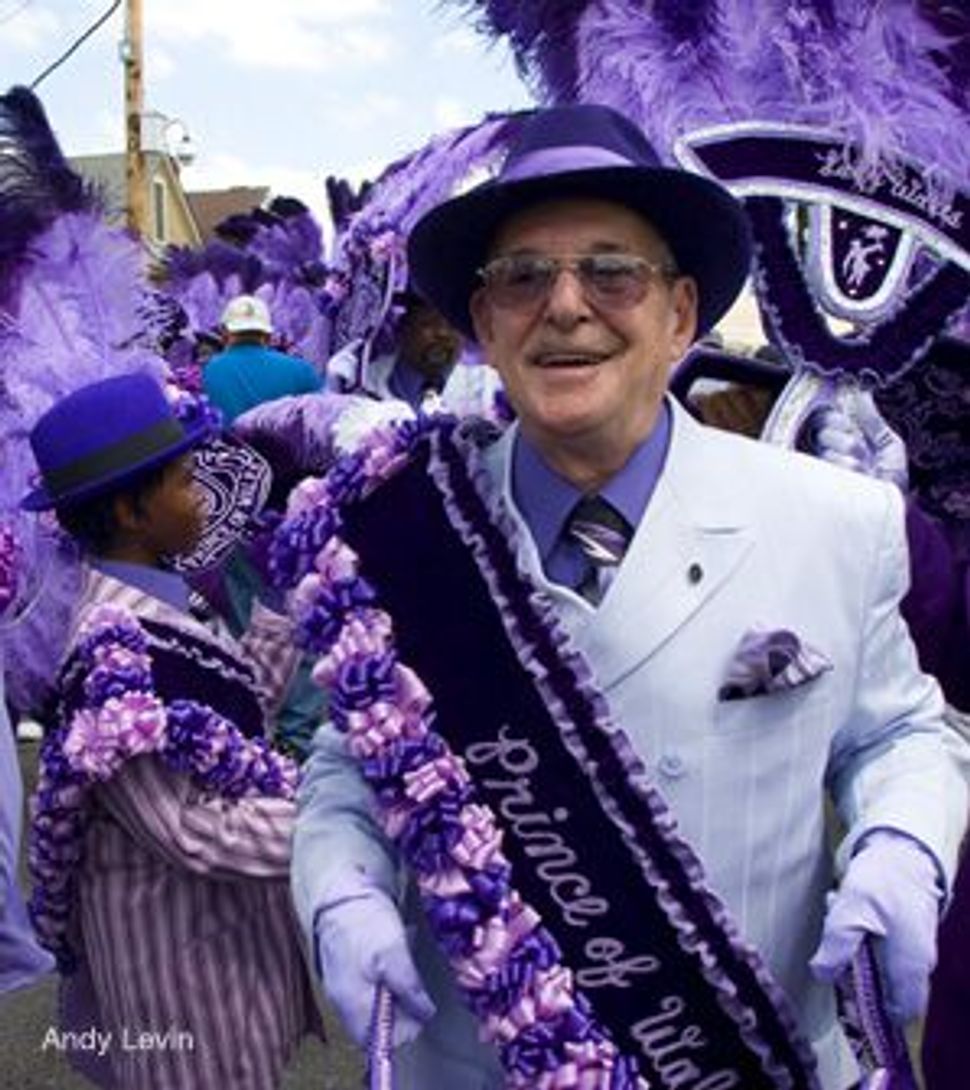 FIRST IN LINE: Joe 'White Boy' Stern presides over a procession of the Prince of Wales club, the first time in memory that a white person has headed up a brass-band 'second line' parade for one of New Orleans's traditional black social clubs

New Orleans – Even while fanning himself with two enormous ostrich feathers, Joe “White Boy” Stern, the small, milky-skinned man at the head of the jazz parade, sweated underneath his blue linen suit. 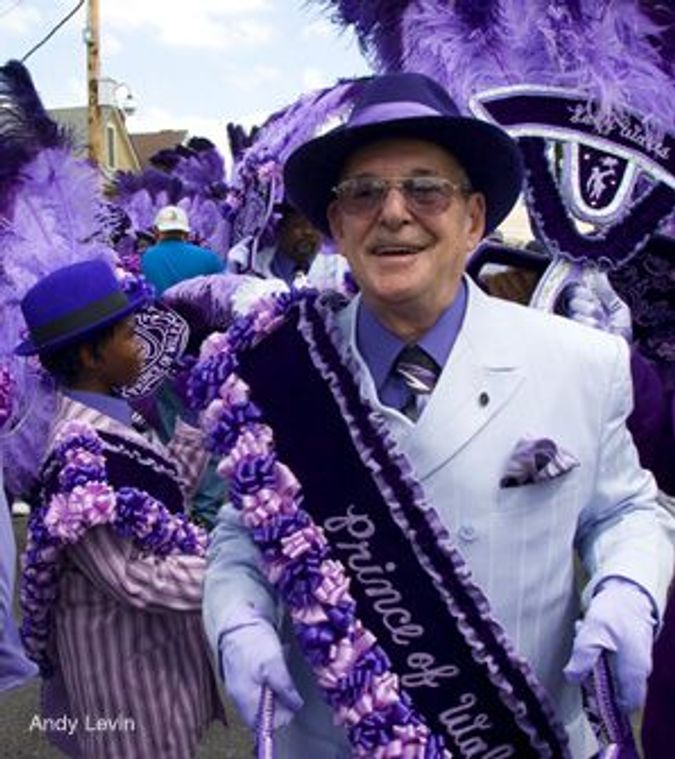 FIRST IN LINE: Joe 'White Boy' Stern presides over a procession of the Prince of Wales club, the first time in memory that a white person has headed up a brass-band 'second line' parade for one of New Orleans's traditional black social clubs

“Hey, Joe, ya’ll right?” one man shouted from behind the thin rope separating the traditional New Orleans street procession from the crowd of sidewalk revelers moving along with it.

Stern, a 65-year-old secular Jew, had reasons beyond the city’s ever-present humidity to feel a little overheated. It was the first time in anyone’s memory that a white person was presiding over a brass-band-led “second line” parade for one of New Orleans’s traditional African-American social, aid and pleasure clubs. Plus, dancing through a city with a crowd of 2,000 — and generations of history — trailing behind you is not what anyone could call effortless, not even in the Big Easy.

“Finding Joe here is like finding me tilling the soil at the most important kibbutz in Israel,” said Eddie “Papa Duke” Edwards, a well-known drummer and civil rights activist, after the annual procession of the Prince of Wales Social Aid and Pleasure Club on October 14. Stern became president of the 79-year-old local institution earlier this year after a unanimous vote by its members, who, other than Stern, are all African Americans.

Stern’s involvement in the Prince of Wales club is a step forward, but it is also a bit of a throwback — most of all to the years before the Civil Rights era when the black and Jewish communities in New Orleans had close relations. Many of those ties have disintegrated in the intervening years. But now, in the wake of Hurricane Katrina, there are efforts to patch things up and, as in Stern’s case, music is a leading forum.

“It says something about the city and where it is now to have me, a Jew, second lining, with a social, aid and pleasure club,” Stern told the Forward a few days after the annual event.

Certainly, the most familiar story of black-Jewish relations in the Big Easy is that of Louis Armstrong and the Karnovsky family. The Karnovskys employed the city’s golden son on their coal wagon and helped Armstrong buy his first cornet, an instrument that he would play around the world, wearing a Star of David around his neck as a gesture of gratitude.

A half-century later, it was the Jaffe family, Jewish jazz aficionados, who recognized that the city’s talented musicians deserved a larger audience and founded Preservation Hall, now a world-famous jazz destination with a nationally touring band.

In recent years, though, things have not been so congenial.

“There has not been as much urban contact as there had been in the Civil Rights era and in the decades previous to that,” said Marshall Stevenson Jr., head of The National Center on Black-Jewish Relations at Dillard University, a black college in the city. “Because of that, there has not been a place to sit down and talk about common issues, or even just talk at all.”

In explaining the dissolution, Stevenson and others point to white flight to the suburbs and to an ever-growing class divide in the city.

One person who has been attempting to repair that breach is L.J. Goldstein, a New York-raised lawyer who now resides in Treme, New Orleans’s historic jazz district. Over the past several years, Goldstein has worked with everyone from the president of the local Jewish federation to famed jazz pianist Ellis Marsalis Jr. in an attempt to organize annual brass-band parades celebrating Hanukkah and Purim, as well as Halloween and, of course, Mardi Gras.

“The Jewish people have done well in this country, and because of that success, we have a certain obligation to help those who need it,” Goldstein said.

For the past few years, one Mardi Gras float has been paraded by the Krewe De Jieux, which was founded by Goldstein and throws bagels rather than beads. In 2006, the Krewe De Jieux included Ronald Lewis, a Lower Ninth Ward community organizer and the founder of a museum dedicated to African American parade traditions called the House of Dance and Feathers. Lewis stood at the center of the glittery float in a white work-suit exactly like those worn by rescue workers following the storm, except for a giant, red Star of David on the back.

Lewis believes that the influx of liberal Jews to the city, especially after the storm, is already renewing relations between the two groups.

“The new people coming to the city are learning about the way we do things and getting involved and changing things,” the retired railroad conductor said.

For Lewis and Goldstein, some of the best places for this integration to happen are the second line bands connected to the pleasure clubs. The social, aid and pleasure clubs are remnants of the city’s insular, ritual-driven culture from the early 20th century. Like Jewish fraternal groups of the same period, the dues-paying local groups provided members with burial insurance and other social services that families wouldn’t be able to afford without pooling resources. The Prince of Wales club is the city’s second oldest fraternal society.

The phrase “second line” refers to the people who dance down the street behind the musicians and the club members. The tradition is rooted in funeral rituals that honor the dead with sonorous public marches led by jazz musicians. Originally, the social clubs took to the city’s avenues to attract new members. Now, the parades are annual coming-out galas for the clubs, which spend tens of thousands of dollars paying for security, live music, costumes, and food and drink for the Sunday afternoon events.

“It’s like being king for a day,” Stern said.

Stern traces his own interest in African American culture to his confirmation at a Reform movement synagogue in the Euclid section of Cleveland.

“The temple we went to was in the ghetto,” he said. “I would go there for Hebrew high school, and end up talking to the black people who lived in the neighborhood more than the kids in my class.”

In his college years at Ohio State, Stern joined a Jewish fraternity; however, he ended up hanging out across the street at a black students’ frat house because he preferred the music. His involvement in New Orleans’s indigenous parade community came more gradually, when he began attending second lines to hear the music soon after moving to the city in 1980.

There were no Jews parading then, aside from the occasional photographer or graduate students.

“At first they didn’t want him over here,” said Edwards, a member of one of the first nonwhite Creole families in Louisiana to own land.

“They said, ‘Why does this Jew want to be part of oldest black movement in the city?’ But he fought to be here. He came as a Jew and didn’t put it aside. He represented the Jewish people, and he learned about our culture.”

“White Bread is the food of life,” the musician said. “Joe has earned that name using his education, knowledge and wisdom to help people in our community. He has gotten people out of jail, taught grown men to read and raised black children that were not his blood.”