A Celebration for the Mumbai Attack’s Littlest Survivor 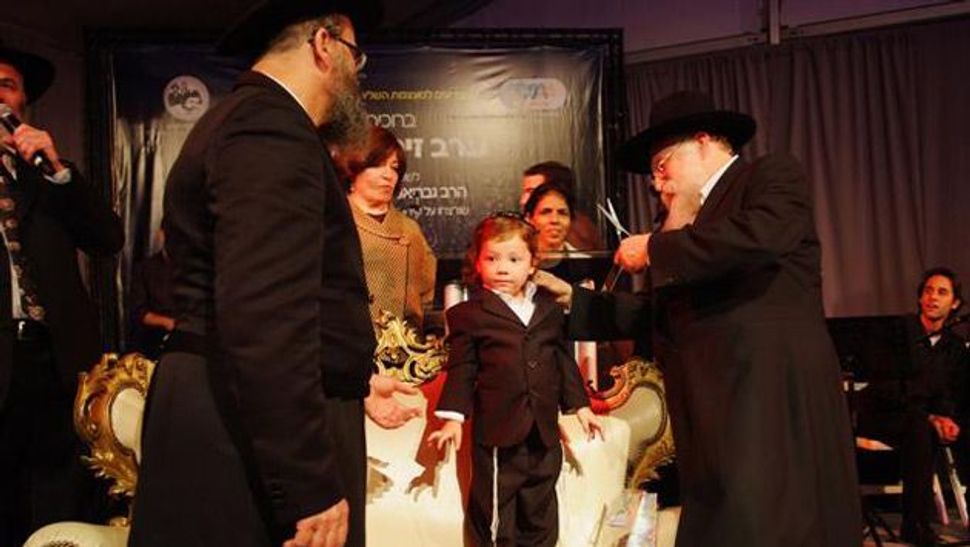 My New Earlocks: Moshe Holzberg, a son of the two Chabad emissaries murdered in last November?s Mumbai terror attacks has his 3-year-old locks cut at a traditional upsherin ceremony which brought out thousands in Kfar Chabad, Israel. Image by Yisrael Bardugo

Last November, people around the world shed tears over one of the most tragic images of the Mumbai attacks — a newly orphaned little boy crying at the loss of his parents.

But the heartbreaking story of little Moshe, then 2, was also hailed as an example of courage and humanity in the face of unspeakable violence. As Islamist terrorists kept Chabad’s Nariman House under siege, Moshe’s Indian nanny, Sandra Samuel, risked her own safety to rescue the Hasidic boy. She had locked herself in a room on the first floor of the building when the terrorists entered, but ran up to the second floor and escaped with the boy in her arms.

Moshe — or Moishele, as his family affectionately knows him — is the son of Gavriel and Rivka Holtzberg. Gavriel Holtzberg, 29, was born in Israel and moved with his parents to the Crown Heights section of Brooklyn when he was 9. Rivka Holtzberg, 28, studied at a seminary in America but was originally from Israel. As newlyweds in 2003, the Holtzbergs went to Mumbai to establish the Chabad House. They developed it into a welcome spot where Jewish locals, backpackers and visiting businessmen could find a friendly atmosphere, accommodations, kosher food and religious education. Rivka Holtzberg was five months pregnant when gunmen murdered her, her husband and four guests in a coordinated attack on the Chabad House and four other sites in Mumbai.

Moshe is beloved in Chabad-Lubavitch circles, and because the massacre took place shortly before Hanukkah, he is often described as the “little jug of oil” — a reference to the single container of sacred oil found among the desecrated Temple in the Hanukkah story.

Right after the shootings, Samuel, who is in her 40s, left behind her life in India to take care of Moshe at the home of Shimon and Yehudit Rosenberg, Moshe’s maternal grandparents, in the northern Israel town of Afula. “He is with her. He is very connected to her. She loves him, and he loves her,” Shimon Rosenberg, a communal rabbi and Chabad-Lubavitch emissary, told the Forward. The boy is bilingual, speaking to his family and friends in Hebrew and to Samuel in English.

Moshe is thought to have witnessed some of the most violent acts that took place inside Chabad House. When Samuel found him, he was crying, crouched next to four people lying motionless on the ground; when she carried him out, he reportedly had bloodstains on him. And his grandfather said he is “certain” that the boy understands at least part of what happened, and said that Moshe suffers from “bad dreams and difficult sleep.”

Sometimes, Moshe surprises family members with his sense of connection to India. Rosenberg said: “I was coming back from shul and said to Moshe, ‘Now we are going home.’ He said, ‘[Your] home, Zeyde [Yiddish for grandfather], is Afula, and my home is Mumbai.’ ”

Adding to the family’s tragedy, both of Moshe’s older brothers died of a genetic disease — one of them two years before the attack, age 3, and the other around a month after the attack, age 4.

But with the help of weekly therapy sessions, Moshe is reaching the normal milestones for a child his age. “Slowly, slowly, step by step,” Rosenberg said.

On November 18, Moshe celebrated his third birthday, according to the Hebrew calendar, with a party at Kfar Chabad, the Chabad-Lubavitch town in central Israel. The Jerusalem Post reported that 2,000 people attended a combination birthday party for Moshe and memorial dinner for his parents that day.

The following day was chosen for Moshe’s upshern, a ceremony in which an Orthodox boy receives his first haircut. In Chabad-Lubavitch, Hasidim and some other Orthodox circles, for kabbalistic reasons a boy is not given a haircut until the age of 3. The first few locks of his hair were cut at the Kfar Chabad event, and then the next day his official upshern, like that of many Israelis, took place at the northern Israel grave of second-century sage Rabbi Shimon bar Yohai, who is said to have authored the central work of Kabbalah, the Zohar.

And after the traumas of the past year, in the run-up to the birthday party and upshern Moshe at last had something to be excited about. “He feels that this is a special time,” Rosenberg said.

A Celebration for the Mumbai Attack’s Littlest Survivor