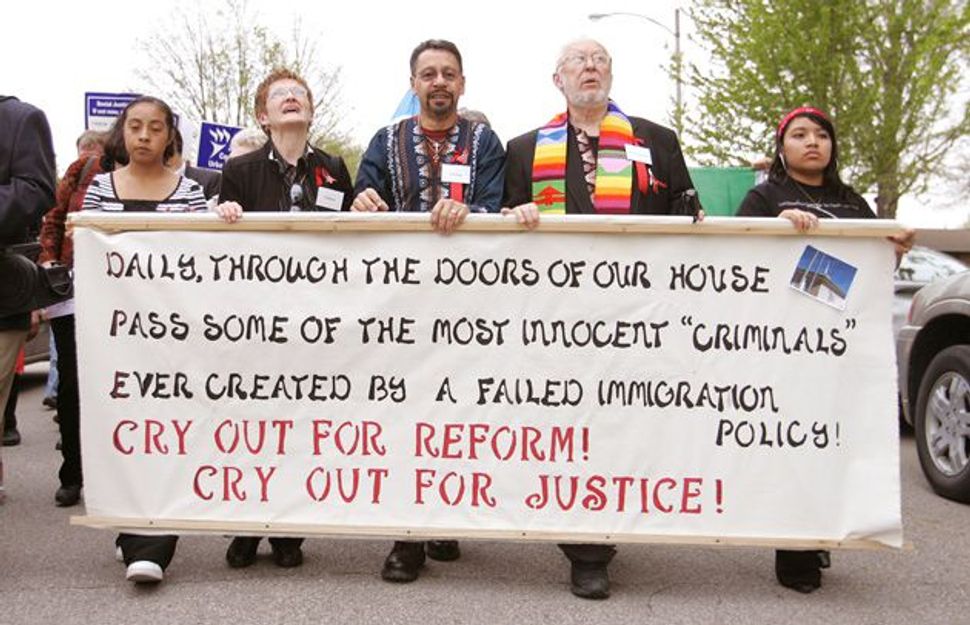 Holding up: Former workers at Agriprocessors (far left and right), march with Father Paul Ouderkirk (second from right), the priest at St. Bridget?s Catholic Church in Postville, Iowa, during an event earlier this year marking the one-year anniversary of the Postville immigration raid. Image by THE WATERlOO COURIER

For the past year, nearly 40 undocumented immigrants from Latin America have been kept in the United States for one reason: to testify against their former bosses at the Agriprocessors kosher meat plant.

On November 19, the same prosecutors who had pushed for the witnesses to be kept in the country quietly announced that the charges were being dropped against the top boss at Agriprocessors, Sholom Rubashkin, who had been accused of illegally aiding and abetting the undocumented immigrants who had worked at Agriprocessors.

The news came a week after the prosecution had won a conviction of Rubashkin on separate bank fraud charges. In a filing, the prosecutors explained that after the bank fraud conviction, any prison sentence that Rubashkin might receive for the immigration charges “would be entirely eclipsed by defendant’s recommended guidelines sentence on the counts for which he has already been convicted.”

For many of the men and women who have been kept in the country to serve as witnesses since being arrested in a massive May 2008 federal immigration raid on the Agriprocessors plant in Postville, Iowa, the news trickled down slowly and was met with confusion. Laura Castillo, a 24-year-old from Mexico who has been kept in the country as a witness, told the Forward that she found out about the charges being dropped only when she looked at online news sites.

“I have to go on the Internet to learn anything about what is going on with the case,” said Castillo, who has found work doing data entry for a municipal agency in Postville. “The lawyers from the government, they don’t tell me anything.”

In nearby Decorah, Iowa, the job of telling a group of witnesses was left to David Vasquez, a pastor at Luther College who helped nine of the witnesses find housing and support during the last year. Vasquez said the men were disturbed that the bank fraud charges had been deemed important enough for a trial but the

immigration charges had not.

“They said to me, ‘If you have money and someone lies to you, that matters — the bank matters,’” Vasquez said. “But the things that they have suffered under — the exploitation at the plant — that is not worth airing or talking about.”

On a more practical level, Vasquez said the news of the charges being dropped has raised new uncertainty for the witnesses about when they will be deported. Six days after the charges were dropped against Rubashkin, the prosecutor released the witnesses in that case, but some of them are set to be witnesses in a trial of a lower-ranking Agriprocessors executive, against whom charges have not been dropped, and whose trial is set to begin in January. Moreover, the move to release the witnesses did little to clear up how deportation proceedings might move ahead. Vasquez said that the witnesses have grown used to living with a constant lack of information and a fear that they may be deported any day.

“They could be here for another year for all we know,” Vasquez said. “We just have no information to figure things out.”

Vasquez said that one of the witnesses had been dropped from the list of witnesses nearly nine months ago and was told then that he would be deported within a month. That man is still awaiting the knock on his door.

“He’s like a running joke,” Vasquez said. “He’s been literally living out of his suitcases for nine months now. He’s just sort of waiting with no way of knowing.”

Sean Barry, a spokesman for the U.S. attorney’s office that is responsible for the prosecution, said that he could not speak about the situation of the witnesses.

The current uncertainty is only the latest trial for the immigrant witnesses in the Agriprocessors case. All of them were arrested in the May 2008 raid on the Agriprocessors plant — and most of them served five-month prison sentences after mass judicial proceedings that were later criticized in congressional hearings.

While most of the jailed workers were immediately deported after their sentences were up, close to 40 were ordered to stay in the country to serve as witnesses against Rubashkin and other higher-ups at Agriprocessors. As the Forward reported last fall, these witnesses were sent back onto the streets with no means of support — and, in some cases, with no clothing other than their prison uniforms. They had to wait for work permits to be processed, and in the meantime they relied entirely on churches in and around Postville for support. It took one of the witnesses nearly six months to receive a work permit.

“They felt it was like another punishment for them,” said Stephen Swift, a court-appointed attorney who is now responsible for representing nine of the witnesses.

Early on, Vasquez and Violetta Aleman, who has helped the workers through Postville’s St. Bridget’s Catholic Church, said that a number of the workers wanted to go back to their homes in Guatemala and Mexico, but they were not allowed to. The young son of one of the witnesses died in Guatemala, but his request to attend the funeral was denied, Aleman and Vasquez say.

Since receiving temporary work permits, the witnesses have gone to work — many of them back at the kosher meat plant in Postville, which was bought by a new owner in August and renamed Agri-Star. Before the raid in 2008, many workers complained about the working conditions and low pay at the plant. Vasquez and Aleman both say that the pay has improved, but they have heard an increasing number of complaints about the same old problems at the plant under the new owners, including verbal abuse from managers, and managers unwilling to provide time off for doctors’ appointments and meetings related to the trials.

“Basically the payment is better, but other than that everything is almost the same,” said Aleman, who works at St. Bridget’s as a liaison to the immigrant workers.

A number of workers requested the day off on Sunday November 22 to attend and speak at a community event about the immigration raids. Those requests were denied.

A lawyer for Agri-Star, Shalom Jacobs, said that “in the future, it would be helpful for organizers of these events to schedule events on a Friday or Saturday when Agri-Star workers have the day off.”

Jacobs said that the hours of the employees at the plant have increased lately as the new owners have ramped up operations at the plant, but he said that the owner, Heshey Friedman, “is not aware of any specific employee complaints.”

“While more improvements are planned, in just 90 days our team has begun taking the necessary steps to bring pride to the plant and the Postville community,” Jacobs said.

Vasquez said that the witnesses he has spoken to are willing to put up with difficult working conditions because of the uncertainty about their future.

“They really have no way of planning for even a week ahead,” Vasquez said. “When you’ve got that, and this may be the last they can work in the United States, they just work.”

Now, the prosecutors’ decision to drop the charges against Rubashkin has given the workers a new source of concern. Father Paul Ouderkirk, the priest at St. Bridget’s, said that he had hoped that the resources his church had spent in taking care of the witnesses would be partially compensated for by the opportunity to hear them tell their stories in court.

“We just felt that it was a matter of justice that they have their time in court to testify and explain that they were mistreated — not only in the plant, but by the government as well,” Ouderkirk said. “This means that all of our work was for naught.”

Castillo, who worked at Agriprocessors after coming to the United States three years ago, said the decision to drop the charges sends the message that Rubashkin did nothing wrong in his dealings with his immigrant workers.

That is the message received by the Rubashkin legal team. His lawyer, Guy Cook, told the Forward, “the charges have been dismissed, and so it’s as if the case had been tried and won.”

“For the witnesses,” Aleman said, “it’s basically a year and a half that they’ve sat here — wasted. For nothing.”