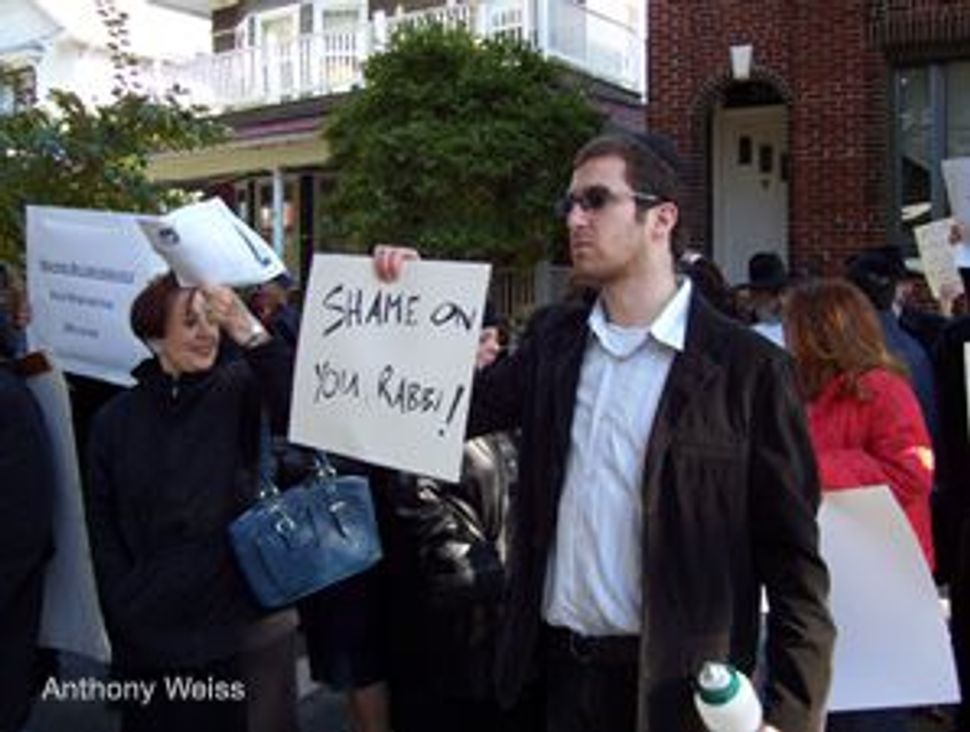 RALLY: Roughly 30 people attended the protest on Saturday outside the Brooklyn home of Rabbi Shlomo Blumenkrantz

Several prominent Orthodox rabbis appeared at a rally Saturday outside the house of another Orthodox rabbi, joining league with protesters who waved signs and chanted, “Stop the abuse.” 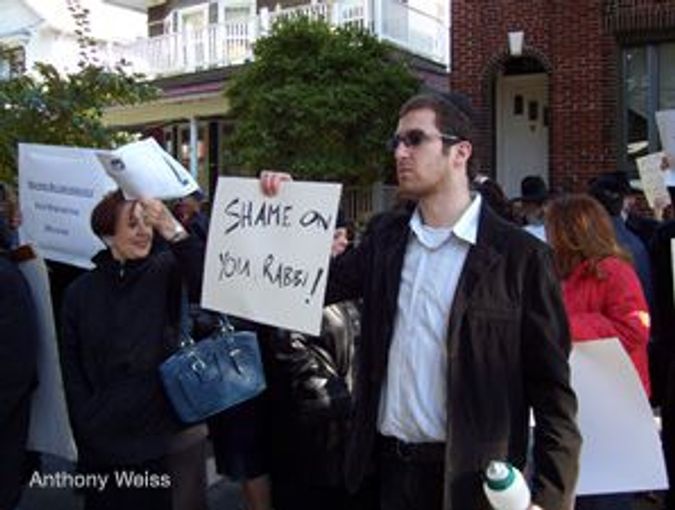 RALLY: Roughly 30 people attended the protest on Saturday outside the Brooklyn home of Rabbi Shlomo Blumenkrantz

The rabbis were gathered in support of agunot — Jewish wives who have been refused a Jewish divorce by their former husbands. The protest took place outside the Brooklyn home of Rabbi Shlomo Blumenkrantz, who is accused of enabling such men.

“All these people have been hurt,” said Rabbi Jacob Rabinowitz, a former dean at Yeshiva University who attended the rally. “I’d like to see [Blumenkrantz] stay away from the whole area in issuing halachic rulings. He should leave it to organized bodies.”

The status of agunot, or “chained women,” has become a major women’s rights issue in the Orthodox world. According to Jewish law, only a man can grant his wife a religious divorce, by providing what is known as a get. Some men have refused to offer the get, even after completing a civil divorce. This makes it impossible for the woman to marry again within the faith.

Agunot and their advocates have tried a number of strategies to combat the problem. Many Orthodox rabbis ask couples to sign prenuptial agreements in which the marriage is annulled should the husband fail to grant a get within a certain length of time. Groups have also attempted to pass state legislation making civil divorce conditional on the completion of a religious divorce. Still others have publicly shamed offenders into granting a get.

The advocates who gathered across the street from Blumenkrantz accused him of pressuring agunot to accede to their husbands’ terms, presenting decrees that allow recalcitrant husbands to remarry without granting a get.

Several times when Blumenkrantz came out onto his porch, the protesters broke into chants of “Shlomo Blumenkrantz, stop the abuse!”

Blumenkrantz did not speak to the protesters, and he dismissed their claims out of hand.

“It’s all false,” he told the Forward. “If people would do their homework and study the situation, these things wouldn’t happen,” referring to the protest.

The event was attended by roughly 30 people. Among those present was Rabbi Hershel Schachter, a dean at Yeshiva University. The appearance of Schachter, a respected talmudic scholar known for his strict interpretation of Jewish law, suggests that the movement on behalf of agunot is gaining mainstream acceptance in the Orthodox world. Schachter sent a letter to the members of the Rabbinical Council of America, the largest union of Orthodox rabbis, and the National Council of Young Israel, urging the organizations to attend the rally.