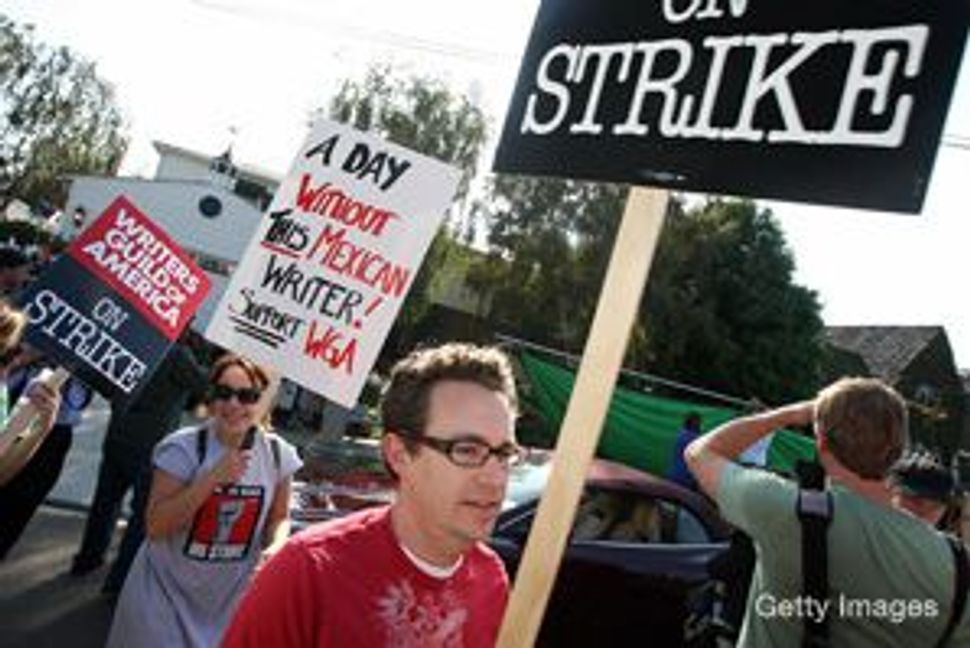 OFF SCRIPT: Hollywood scribes picket this week as part of a Writers Guild of America strike over the distribution of profits from new media sales

Los Angeles – At the end of a long day of picketing, a top leader at the writers’ union scrambled to recite his afternoon prayers on a side street just around the corner from Culver Studios, where he had been marching and chanting union slogans for hours, his yarmulke in full view. 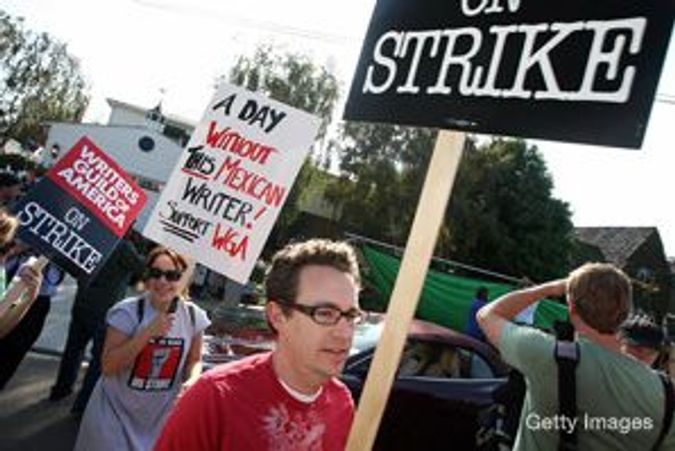 OFF SCRIPT: Hollywood scribes picket this week as part of a Writers Guild of America strike over the distribution of profits from new media sales

David N. Weiss, a Modern Orthodox Jew who is beginning his second term as vice president of the Writers Guild of America West, is not the only religious Jew in a union that has traditionally been composed of large numbers of secular Jews, but he may be the most visible. A scribe on the family movies “Shrek 2” and “All Dogs Go to Heaven,” Weiss has been a key player in the prickly negotiations with The Alliance of Motion Picture & Television Producers that broke down last weekend, leading to the first writers’ strike since 1988.

The walkout, set into motion November 5

by Weiss’s union and the Writers Guild of America East, came after talks with the producers’ union failed to give writers a share of residuals from such new-media outlets as cell phones and iPods.

According to Weiss, the issue at hand is one that resonates with his theology. “Our people have such a rich tradition around justice and the rights of workers,” Weiss said. “And the reality is that these companies are proposing rollbacks that prevent workers from having jurisdiction over the entire future,” he said, referring to the increasing ubiquity of the Internet.

It is widely predicted that in the years to come, most entertainment will be consumed through cyberspace rather than through the television set.

Weiss is but the latest in a long list of Jewish writers who have held leadership positions in — to say nothing of the membership ranks of — the writers’ union. Jews have also played a starring role on the side of management, dating back to the early days of Hollywood, when moguls such as MGM chief Louis B. Mayer wrangled with writers and actors over wages. But what is new about Weiss is his religious bent.

David Myers, director of the University of California, Los Angeles’s Jewish Studies Center, noted that in previous decades, most Hollywood professionals who were Jewish were steadfastly committed to becoming part of the American mainstream. Now that Jews have successfully assimilated, Myers said, some in the current generation are returning to Jewish practice, and feeling no need to hide it. Myers even called Weiss’s position in the writers’ union the “grand fulfillment of the Modern Orthodox ideal.”

“He stands at the center of a paradigmatically American cultural institution, Hollywood,” Myers said. “Yet he stands there without having discarded his commitment to traditional Jewish observance, which would have been unimaginable in an earlier generation.”

Founded in 1933, the guild was formed following salary cuts that inspired members of the Writers Social Club to organize. Among the founding members were Jewish writers Edwin Justus Mayer and Lewis Weitzenkorn. Howard J. Green, who penned “Morning Glory” (1933) and “The Lemon Drop Kid” (1934), served as the first president of what was then called the Screen Writers Guild.

Weiss, who was born Jewish and raised in a Reform household in Ventura, Calif., converted to Christianity after high school. It wasn’t until the early 1990s that he came back to Judaism, after an encounter with an Orthodox Jew working alongside Weiss at a film studio in Ireland led him to explore the faith. Weiss was married under a traditional Jewish wedding canopy, or chupah, in a church by both a priest and a Jews for Jesus rabbi, but his wife later converted and the couple now attends the Westside Kehillah, located on Los Angeles’s heavily Jewish west side.

Weiss’s first project after coming back to Judaism was the one of which he said he is most proud: the Rugrats Hanukkah special, which continues to be aired each year come December.