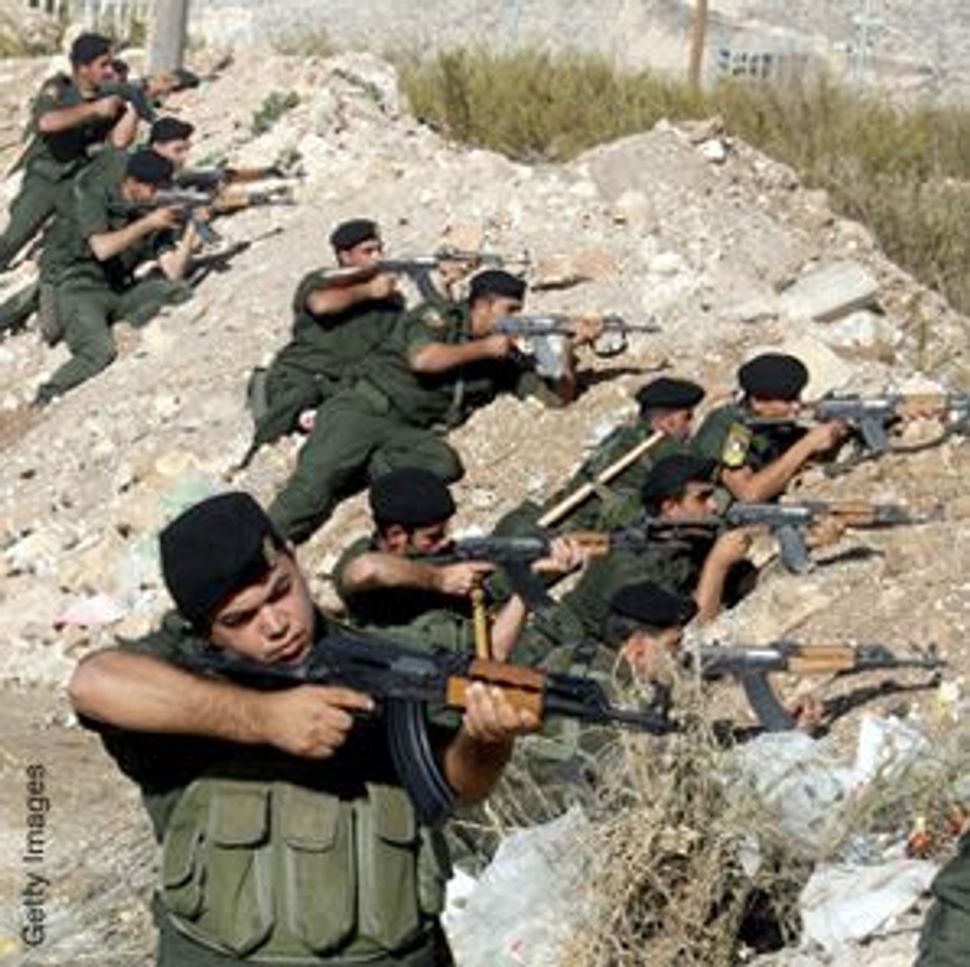 IN TRAINING: Recruits for a new Palestinian police force are trained in the West Bank town of Nablus

Nablus, West Bank — Tawfiq Kalboni fidgets with some wayward bills. A moneylender in this central West Bank city, Kalboni, 42, owed another moneylender about $150,000. When he failed to pay, he said, the creditor collected on the debt, Nablus style. Five weeks ago, masked gunmen kidnapped his 14-year-old son from the doorstep of his house. 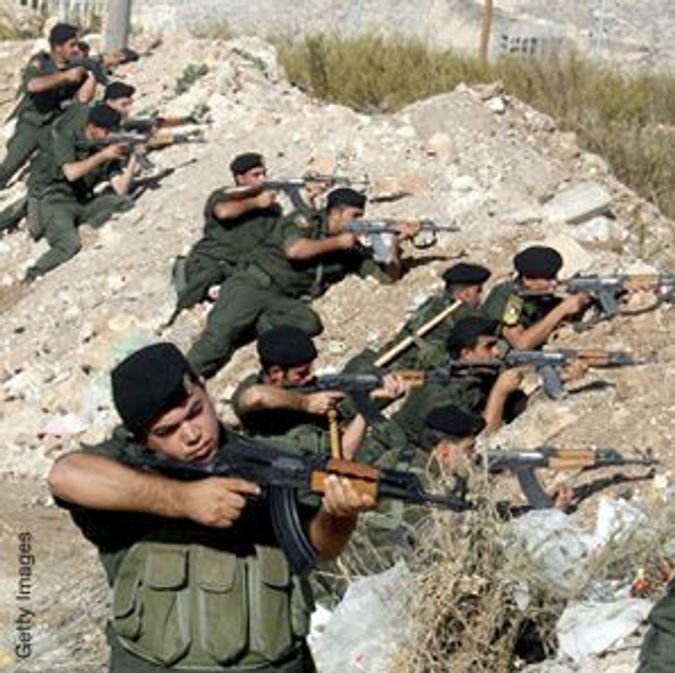 IN TRAINING: Recruits for a new Palestinian police force are trained in the West Bank town of Nablus

Hat in hand, Kalboni canvassed his extended family for most of the $100,000 ransom. The rest he planned to pay in installments. Eight days later, his son was brought home, pale, weak and terrified. Kalboni said he’s barely slept since.

When asked why he didn’t just call the police, Kalboni snorted, “What police?”

“Lawlessness like that is over,” insisted Ahmed Sharkawi, police chief in a town ruled over the past six years not by the Palestinian Authority but by armed militiamen who often moonlight as hired guns.

Sharkawi’s Nablus police force is the spearhead of a sweeping Palestinian security overhaul, partly funded by Washington. The new West Bank security plan, beginning with a crackdown on militants in Nablus and the unification of about a dozen disparate security forces, is the keystone of the American-sponsored road map peace plan. The plan requires the Palestinians to crack down on militants before peace talks can progress.

In a November 11 speech marking the third anniversary of the death of Yasser Arafat — the man who made the Palestinians an international cause célèbre — Palestine’s current president, Mahmoud Abbas, called next week’s Annapolis, Md., peace conference “an historic opportunity to make a new page in the Middle East.” But to turn that new page, Abbas cautioned, the Hamas military wing must be crushed.

“Nablus is the model for the West Bank,” Sharkawi said in his crowded office, stubbing out a Marlboro for emphasis. “It’s the most important West Bank city, and it has also been one of the most problematic. If we can make Nablus safe, we will be deployed in other cities.”

In an interview last week, senior Palestinian negotiator Yasser Abed Rabbo said that “the main issue for our government now is security, and by security I don’t mean only technical security. I also mean political security, in which we will guarantee a safe atmosphere for our democracy to develop.”

Sharkawi said the crucial factor is the nascent coordination between the security branches, which eventually, it is hoped, will absolve Israel of security responsibility in Nablus.

Sitting beside him during the interview was the chief of preventive security in Nablus, Akram Rajoub, a gruff intelligence veteran. In the past few weeks, Rajoub said, his agents have confiscated more than 70 assault rifles and have arrested unspecified numbers of Hamas members. While the relatively meager haul falls short of inspiring, Rajoub vowed that “no Hamas Executive Force will rise in the West Bank, that is for sure.”

Rajoub referred to the Executive Force in Gaza, a Hamas militia that has more than 7,000 well-trained and equipped men. Last Monday, Gaza force members opened fire on a crowd of tens of thousands of rival Fatah activists, gathered to commemorate Arafat’s death. Six died, and dozens were wounded.

Rajoub concedes there’s still much work to be done. On November 1, a battalion of 300 Palestinian National Security troops was dispatched to Nablus, the first detachment under an agreement with Israel for the city to be patrolled by Palestinian officers by day and by Israeli troops at night. The next day, some 200 of those soldiers, joined by Sharkawi’s cops, staged the first Palestinian raid in years on militant hideouts. They encircled the Balata refugee camp, hunting al-Aqsa Martyrs Brigades members. At day’s end, after hundreds of rounds of fire were exchanged, most of the battle’s eight wounded were National Security troops and civilians.

Kalboni, looking like a caged animal in the back of his sooty money-lending shop, acknowledged that recently, the streets seem safer. More than a dozen Palestinian police checkpoints have slashed the rate of theft. Traffic cops are out in force. Most important, militants no longer dare to parade armed in the streets. “But I still don’t trust the police,” Kalboni said. “Where were they when my son was kidnapped? I had the names of the men responsible, I gave them to the police, but they did nothing.”

It’s a feeling shared by the Israeli security establishment over the past six years. A tenuous coordination characterized relations after the first Palestinian security agencies formed in 1994, but it snapped when the second intifada erupted in 2000.

Yoni Fighel, senior researcher at the International Policy Institute for Counter Terrorism at the Interdisciplinary Center in Herzliya, warns that the security regime in Nablus could easily collapse. “You can’t rely on an experiment of dual sovereignty, whereby Israel controls the city at night and the Palestinians by day,” said Fighel, a former West Bank military governor. “It’s a recipe for failure, because it requires extremely tight coordination between Israel and the Palestinians.”

If the daylong Annapolis conference ends in failure, Fighel reckons militants will again prowl Nablus streets, and the city will quickly revert to the rule of the gun.

An American official here described the Nablus experiment as “a rolling start.” He said that a core of professional Palestinian officers is being trained theat will eventually outmuscle and outmaneuver the Hamas and Fatah militants who still control local refugee camps. It could be weeks, he added, before P.A. security forces begin to patrol at night, “but that’s the goal.”

Last July, President Bush pledged $86 million to jumpstart the training. So far, only $6 million has gone to training Palestinian officials. Not a penny of that money, officials say, was spent on the sparkling new Jericho facility known as the Palestinian Security Sciences Academy — the most expensive part of the security overhaul.

Opened in late September, the first-ever Palestinian military college boasts the only Palestinian DNA lab, a digital library and even a mirrored weight room. During morning drills under the merciless desert sun, its first 140 cadets practice marching, saluting and something uncommon among Palestinian security agencies: discipline.

The men, and two women, hustle with brimming briefcases among courses on military sciences, business management, conflict resolution and — a must for a future security force — Hebrew.

Yasser Zidan, the institution’s dean, said he had feared that the cadets wouldn’t show up after the first week. In a recent interview at the college, he said that every one of them returned earlier than required. “The motivation here is high,” Zidan said, “because they know this academy is the factory that will produce the Palestinian men who will form the foundation of the Palestinian state.”