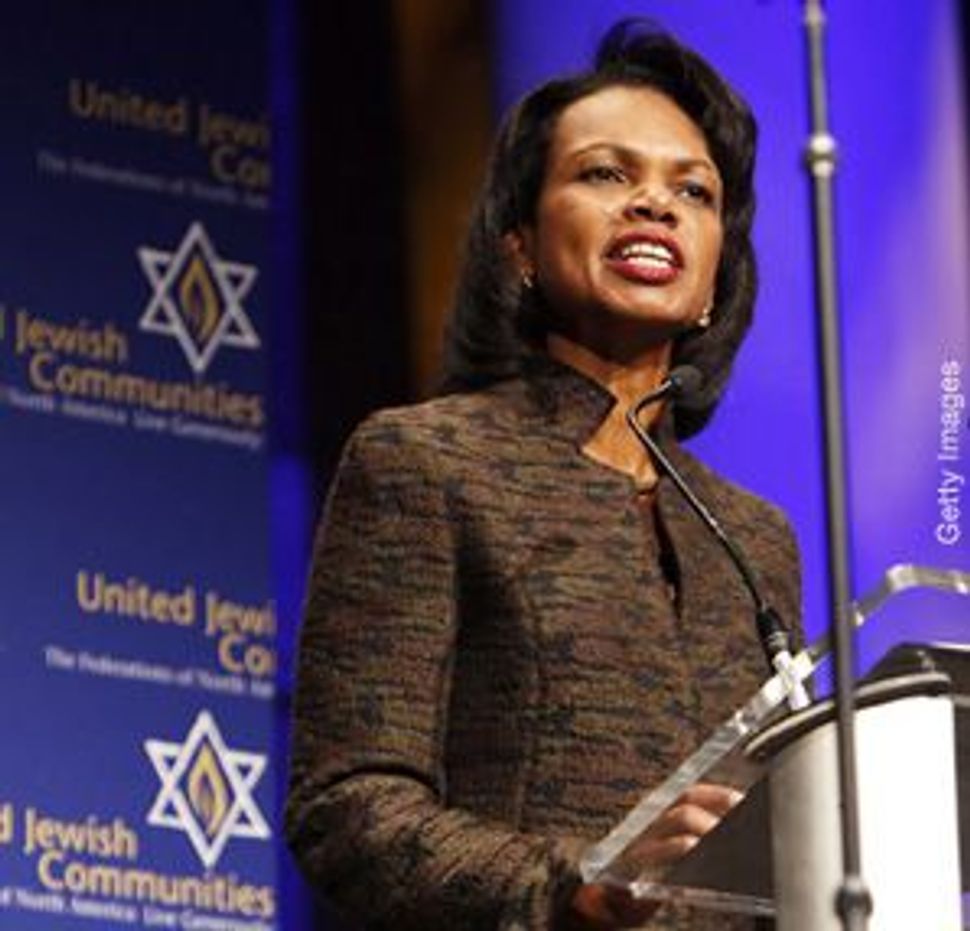 Nashville, Tenn. — The Bush administration is making a last-ditch effort to push the mainstream Jewish community into action in advance of the upcoming peace summit. 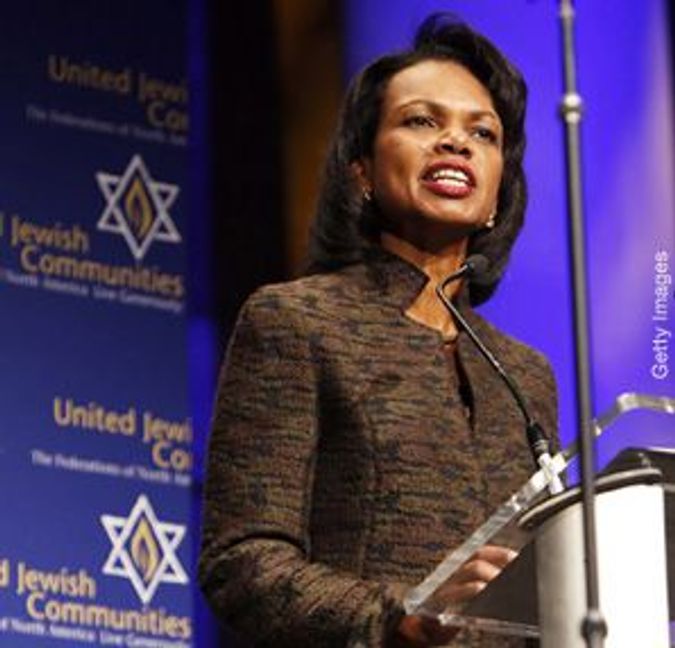 Secretary of State Condoleezza Rice made the pitch Tuesday in a high-profile speech in front of United Jewish Communities, the roof body of North America’s local federations of Jewish charities. The organization was having its annual General Assembly here. Speaking to 3,500 Jewish communal leaders, Rice said that “failure is not an option” for the upcoming summit, which is set to take place in Annapolis, Md.

“What is at stake is nothing less than the future of the Middle East,” Rice said in her speech.

Rice’s appeal for support from the Jewish community comes less than two weeks before the Israelis and Palestinians convene for a meeting meant to kick-start peace negotiations. Most mainstream Jewish groups in the United States have avoided taking strong positions on the summit.

Rice’s speech was not an isolated event. The secretary of state also gave an interview to the JTA — formerly known as the Jewish Telegraphic Agency — and members of her team and of the National Security Council have been speaking in recent weeks to Jewish leaders about the conference.

Thus far, most of the noise from the Jewish world has come from organizations on the right and left — and both sides were on hand to make their case at the General Assembly.

The Coordinating Council on Jerusalem, a loose coalition of mostly hawkish Jewish groups, had a display booth at the UJC General Assembly’s marketplace. Jeff Ballabon, one of the council’s chief organizers, handed out small stones engraved with “Ani Yerushalmi,” Hebrew for “I am a Jerusalemite.”

The council, which includes the Orthodox Union, argues that the future of Jerusalem should not be on the table in Annapolis. Ballabon said he hopes that the “issue of Jerusalem breaks through a deaf, dumb and blind commitment to Israel based on the idea that ‘We support Israel, but we can’t define what pro-Israel is.’”

At the other end of the hall, and the political spectrum, a spokesman for Americans for Peace Now tried to push G.A. participants to support the peace conference.

Ori Nir, the spokesman, said he is frustrated by the silence of the majority of the Jewish community.

“I find it strange that the Jewish mainstream, whose policy has always been supporting Israel’s elected government, is now silent,” Nir said.

In her speech on the final day of the G.A., Rice laid out the rationale of pushing forward peace negotiations now, arguing that the strengthening of Iran and extremists in the region mandates a drive to support the moderates.

“Violent extremists, which the government of Iran increasingly lead, are doing everything in their power to impose their fear, their resentments and their hate-filled ideologies on the people of the Middle East,” she said. “This makes the two-state solution even more urgent than ever.”

Rice told the Jewish audience that the Palestinian Authority’s president, Mahmoud Abbas, is a partner for peace and that most Palestinians are “ready to end the conflict.” Most Israelis, according to Rice, “are ready to leave most — nearly all — the West Bank, just as they were ready to leave Gaza for the sake of peace.”

The audience broke Rice’s speech with applause at many points, particularly when she spoke of her commitment to Israel’s security. It was chillier when she spoke about Abbas’s strength as a leader. After the speech, audience members noted that Rice had made her presentation nonpartisan — unlike Howard Dean, who spoke to the crowd Sunday. Dean, chairman of the Democratic National Committee, made a political speech accusing Republicans of being less diverse than the Democratic Party.

The main convening body for Jewish organizations, the Conference of Presidents of Major American Jewish Organizations, has not taken on issues that relate directly to the Annapolis meeting, but it is considering a motion that would demand additional steps on behalf of the Palestinians.

The conference, which represents 50 American Jewish groups, was asked by the Zionist Organization of America to adopt a resolution demanding that Fatah “rescind clauses in the Fatah constitution calling for the demolition of Israel.” Malcolm Hoenlein, the Presidents Conference’s executive vice chairman, was quoted by JTA as saying that the measure has overwhelming support among member groups.

A slightly different stance has been taken up by pro-Israel lobbyists in Washington, who have been pushing for more support for the Palestinian leadership. The American Israel Public Affairs Committee has recently put its weight behind a congressional letter urging the administration to increase aid to the Palestinian government of Abbas. The letter, initiated by Democrat Gary Ackerman and Republican Charles Boustany, is supported by both Jewish and Arab advocates in Washington.

One potential reason for the lack of involvement from the mainstream Jewish community is the mixed messages from Israel itself. Israeli Foreign Minister Tzipi Livni, who was scheduled to speak at the G.A., canceled her visit because she now serves as chief negotiator with the Palestinians.

She was replaced by Isaac Herzog, minister of Welfare and Social Services, who called the Annapolis summit a “golden opportunity,” stressing that Israel is taking a “sober” approach to the summit.

In a press conference later that day, Herzog said that the American Jewish community “clearly supports the peace process.” But a different message came a few hours later from another Israeli official.