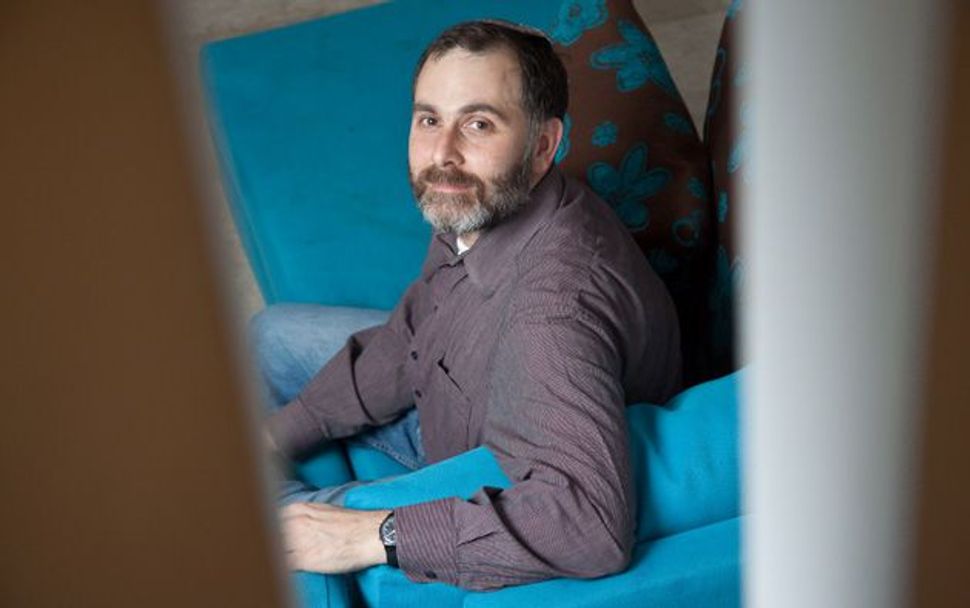 A Pioneer: Ian Chesir-Teran, above, is one of two gay rabbinical students at the Jewish Theological Seminary who are studying this year at the Machon Schechter seminary in Jerusalem. Image by EMIL SALMAN

When the first openly gay rabbinic students came through the doors of Conservative Judaism’s Jewish Theological Seminary in 2007, there remained in the back of everyone’s mind one sensitive, still-unresolved issue:

What would happen when they went to Israel?

All understood that their curriculum, like that of all JTS rabbinic students, would include a third year spent abroad at the Conservative movement’s seminary in Jerusalem, which has so far refused to ordain gay rabbis.

Now, Ian Chesir-Teran and Aaron Weininger — the pioneering gay students — are poring over their Talmuds and arguing the fine points of Jewish law at Machon Schechter in Jerusalem, JTS’s sister seminary. And so far, say both the students and their school, the year abroad is proceeding smoothly, at least on the surface.

“We haven’t encountered blatant homophobia,” Weininger said. “And yet, there’s a history there. There’s that challenge of, a little bit, walking on eggshells.”

This month marks three years since the Conservative movement’s Committee on Jewish Law and Standards opened the gates for gay rabbis. Thirteen of the committee’s 25 members voted for the landmark responsum, or religious position paper, advocating the move — more than twice the number of votes required to allow individual Conservative institutions to adopt the gay ordination position as their own.

The change, however, was not complete. Another responsum taking the opposite view also garnered 13 votes, leaving Conservative synagogues and schools free to adopt either position.

Despite this disparity, “We certainly anticipated that all of our students would continue to study in Israel, including our gay students,” said Rabbi Daniel Nevins, dean of the JTS Rabbinical School. After opening enrollment to gay and lesbian students, he said, “We promptly commenced conversations with our partners in Israel and were reassured that they would welcome all of our students.”

Still, some of the challenges they would face rose to the surface even during those discussions. Chesir-Teran, a former attorney who entered the seminary at the age of 36, recalled one meeting that he, Weininger and Nevins had in New York with Rabbi Einat Ramon, then dean of Machon Schechter’s Rabbinical School. Upon being assured gay students would be treated equally when they came to Schechter, Chesir-Teran said he told Ramon, “I’m assuming that means we’re going to be allowed to lead services and read from the Torah like everyone else,” Her answer, he recalled, was, “I don’t know. I have to get back to you.”

Ramon later confirmed in an email to Nevins that the gay students would, indeed, be allowed to do so. But the equivocation, said Chesir-Teran, was another “red flag” that made him leery about going there.

Ramon’s public pronouncements against gay ordination also stoked the two students’ concerns. In a Washington Jewish Week opinion piece shortly after the committee’s historic vote, Ramon, explaining her opposition to the change, avowed, “Judaism has always been clear and unambivalent toward the centrality of the heterosexual family.” And in a September 2007 policy statement, Ramon wrote, “If we permit [gay marriage and ordination of gay rabbis], we should, in all intellectual fairness, permit also all other forms of prohibited sexual activity and allow the marriage of brothers to their sisters.”

Ramon, who still teaches at Schechter, left her position as dean this past September. And though no one claims the move was connected to her pronouncements on gay ordination, supporters of the historic change say Ramon’s departure has eased the atmosphere for gay and lesbian students at Schechter considerably.

Ramon declined to comment for this article. “I have written and said what I had to say,” she told the Forward.

Nevertheless, during her tenure, the relationship between the two schools was sometimes strained. For example, Schechter put its foot down in March 2008, when several JTS students studying there sought to mark the one-year anniversary of the change in JTS’s admissions policy. The students invited Yonatan Gher, then the incoming director of the gay community center Jerusalem Open House, to speak about his experience as a gay man in the Israeli Conservative movement. But after a dispute with Ramon and others in the administration, the students were forced to hold the event off campus.

Nevins cringed when asked about this event. “That was an incident where no one was at their best,” he acknowledged. “It was a very painful moment.”

Heading into their year abroad with this history in mind, Chesir-Teran, Weininger, and several other students lobbied the JTS administration for alternatives to Machon Schechter.

“The very thought, frankly, of being told by my home institution that I have to study at a school that wouldn’t ordain me, that wouldn’t confer on me the title of ‘rabbi,’ is very challenging,” Chesir-Teran said.

But one option JTS never considered was allowing the students to study at another school. This is a route the Ziegler School took when it announced in January that it would end its 10-year relationship with Machon Schechter. The shift, says Ziegler dean Rabbi Bradley Artson, is unrelated to Schechter’s stand on gay ordination. But Ziegler now sends its students to the Conservative Yeshiva, a co-educational, egalitarian school for Diaspora Jews in Jerusalem.

JTS, said Nevins, is committed to sending its students to an Israeli institution, where they can take classes, taught in Hebrew, alongside Israelis. “The other options out there were American environments, not Israeli environments,” he said.

Though Schechter’s policy against gay ordination continues, the two rabbis selected to fill Ramon’s position this past July are seen as friendly toward the cause of gay students. Rabbi Moshe Silberschein, appointed dean, was ordained at JTS in 1981 and taught for many years at the Reform-affiliated Hebrew Union College in Jerusalem, which has admitted gay students since 1990. Rabbi Tamar Elad-Applebaum, appointed associate dean, is a member of Keshet, the Conservative group pushing for gay inclusion.

Among their reasons for taking their new positions, said Silberschein, is a desire “to unite the movement.”

“I’d like to think that we’re bringing a new spirit of conciliation,” he said. “As far as I’m concerned, it’s a new page.”

Nevertheless, Silberschein says, the school’s ordination policy is unlikely to change anytime soon. While Ramon was dean, she also served as Schechter’s posek, or halachic decision maker. When she stepped down, the two positions were split, and Rabbi David Golinkin was appointed posek. Golinkin decided that Schechter would continue to abide by the more conservative responsum. And Silberschein, whatever his personal views, defers to Golinkin. “I took this job knowing clearly that Rabbi Golinkin is the posek for Schechter,” he said. “But I wanted to once again build bridges with the movement and Schechter and the movement with JTS.”

Now that they’ve settled into their time in Jerusalem, both Weininger and Chesir-Teran are taking stock.

“Having lived now in Jerusalem for almost four months, and really having adjusted well with my husband and three kids here, we’ve indulged a little bit in fantasies about what it would be like to make aliyah, to move to Israel, and to make a home for ourselves here,” said Chesir-Teran. “But I know that that’s really impossible, because I couldn’t continue my studies at Machon Schechter.”

That said, “having a place at the table is a blessing and a privilege,” he said.

Both rabbinical students say that simply being who they are and telling their personal stories has had a profound impact on many of their teachers and fellow students. Being at JTS and at Schechter, said Chesir-Teran, has meant “having opportunities to interact on a daily basis with future rabbis, and to let them see how I live my life, just as I see how they live their lives —to show that my life is equally as holy and equally as mundane as their lives.”