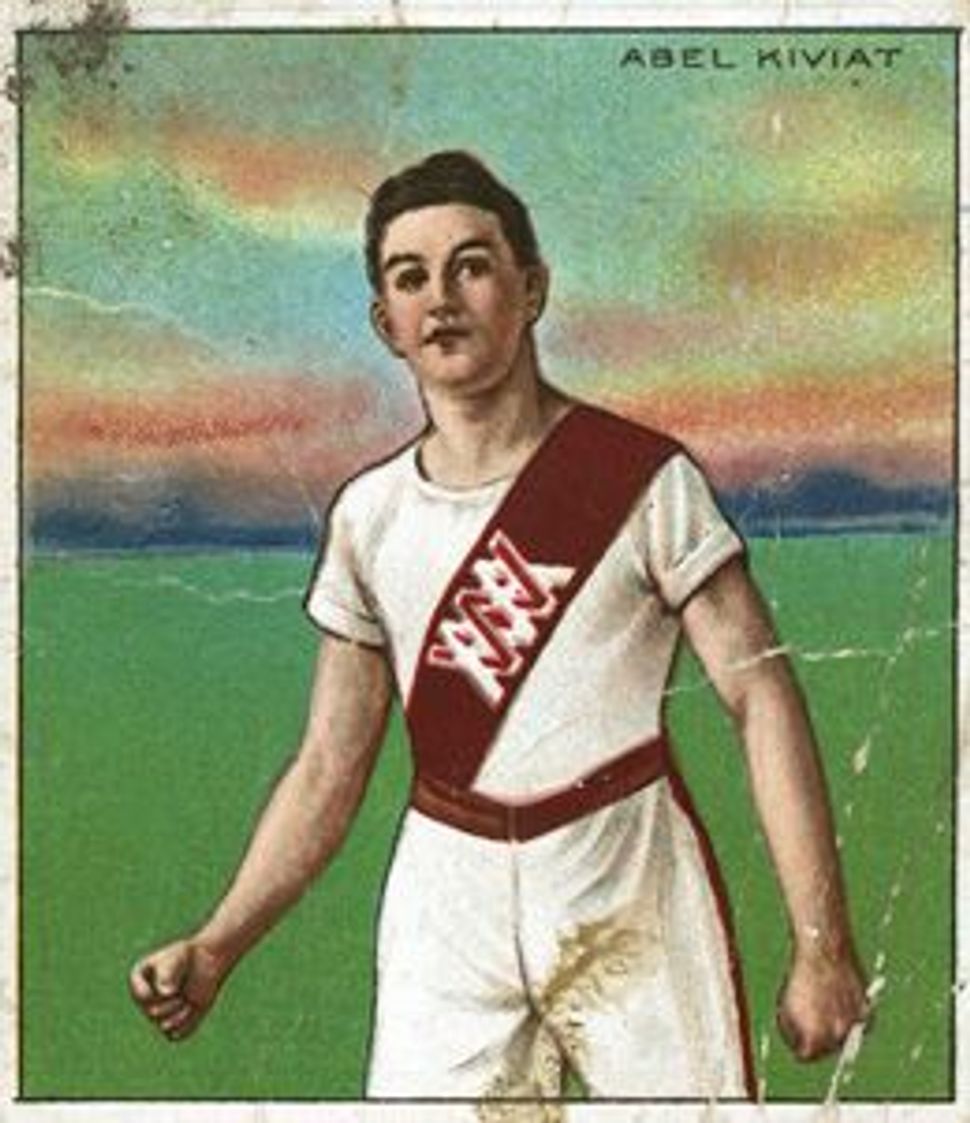 Collectible: A trading card of Abel Kiviat from the 1910 Mecca Cigarettes, Series of Champion Athletes. Image by WINGED FIST ORGANIZATION 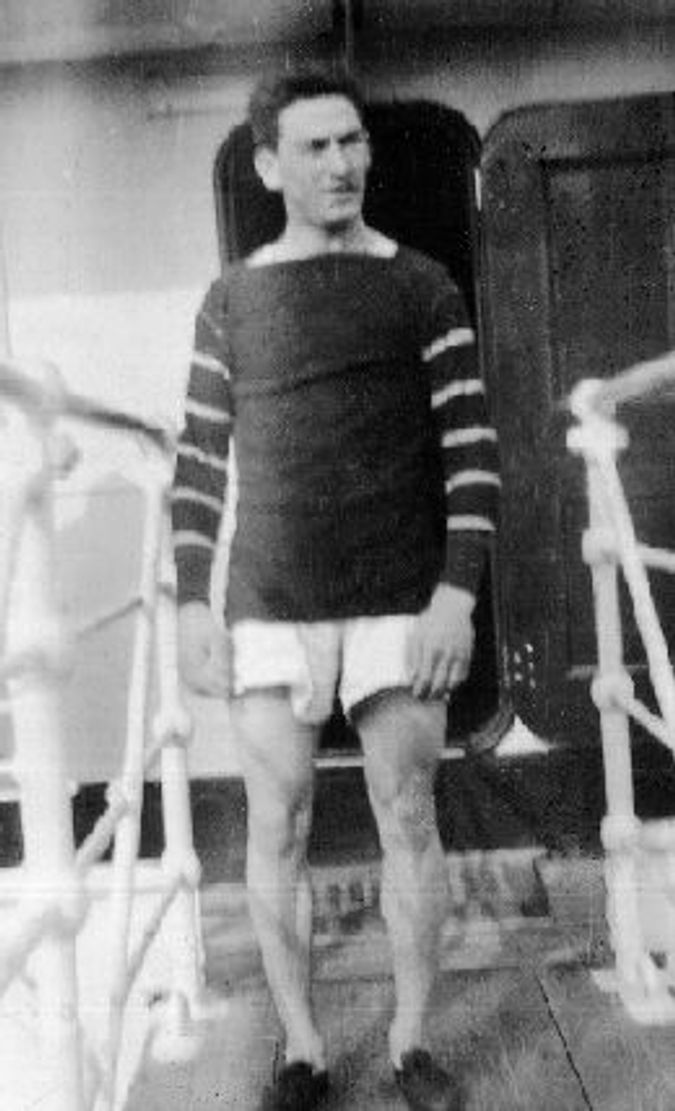 All Aboard: Kiviat wears his boyhood Norwood Athletic club uniform on the S.S Finland in 1912. Image by LUCY PRICE

Saturday, June 14, 1924: Abel Kiviat twists his ankle on a barrier during the Olympic trials in the 3,000-meter steeplechase at Harvard Stadium, falling flat on his face. Then and there, the future International Jewish Sports and National Track & Field Hall of Famer decides to quit, even before the meet ends.

A little more than a year later, he once again trips and falls, this time during the 1,000-meter event at the Wilco Games, an amateur athletic event held in Brooklyn. It was his last official race. This was not the way it was supposed to end for a man once labeled one of the “greatest middle-distance runners in the world,” a man who was 0.2 seconds away from winning a gold medal during the 1912 Olympic Games in Stockholm.

It was a far different scene from the one almost 14 years earlier, when Kiviat set three world records in 13 days of competition. First, he set 1,500-meter world record. Then, a week later broke his own record in a race at New York City’s Celtic Park in that same distance, and, during a race just six days later, beat that time yet again, finally clocking in at 3:55.8 for the 1,500 meter. The third, which was set at Harvard Stadium, would be one of 14 world records achieved by Kiviat as an amateur athlete, a remarkable record for the high school dropout and son of Polish-Jewish immigrants.

Kiviat’s upbringing in Staten Island, and his rise to track and field glory, is explored in Alan S. Katchen’s book, “Abel Kiviat, National Champion: Twentieth-Century Track & Field and the Melting Pot.” In addition to examining the young Jewish runner and his rise to fame, Katchen considers the state of track and field competition during the earlier part of the century and the status it enjoyed in America.

But make no mistake, Kiviat is the star of this story.

Prior to his experience as a world-famous runner, Kiviat had a strong Jewish upbringing. He was brought up in a Yiddish-speaking, Sabbath-observing home and taught to read Hebrew. The Sabbath was the sole day of rest for the chaotic family of nine (Abel was one of seven children). “My parents would send us out to call a non-Jewish boy to light the lights and start the stove once the Sabbath began,” Kiviat said. After his bar mitzvah in 1905, however, his parents did not push him to continue his religious study. 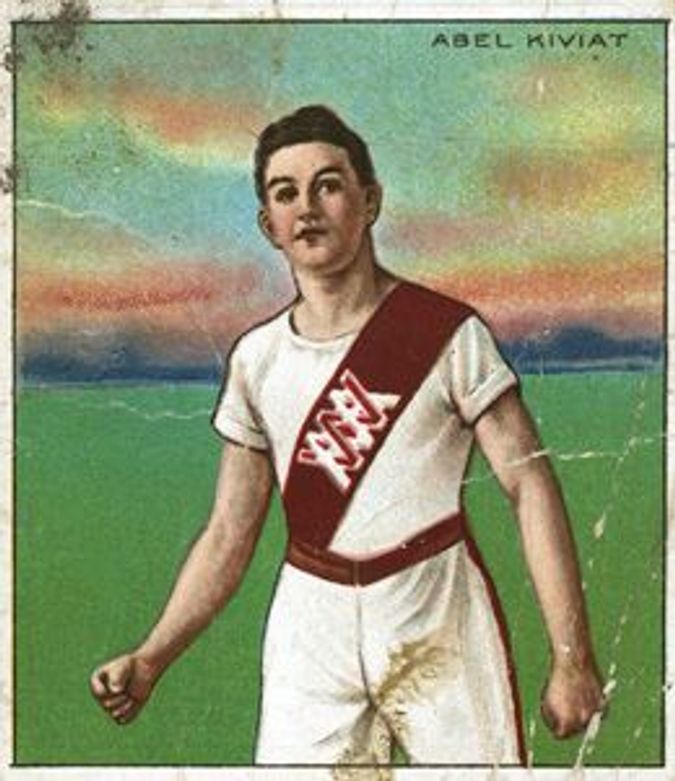 Collectible: A trading card of Abel Kiviat from the 1910 Mecca Cigarettes, Series of Champion Athletes. Image by WINGED FIST ORGANIZATION

From his early days at Curtis High School, Kiviat displayed amazing athletic abilities. Shattering stereotypes of unathletic Jews, he excelled at football, baseball, and track and field. Abel’s parents never understood their son’s interest in sports. Katchen notably points out their embrace of the European notion that “athletics [was] an arena for gentiles.” In fact, in response to an article on baseball, Moishe Kiviat, Abel’s father, wrote to the Jewish Daily Forward in 1903, stating, “I want my son to grow up to be a mensh, not a wild American runner.” Nonetheless, Abel’s parents still let him go out to play sports, which was to lead to his fame, if not fortune.

The details and personal accounts Katchen uses to tell Kiviat’s story are structured and compelling. Katchen does a particularly good job of recounting the accusation that Kiviat accepted money to race in an event, and of the ensuing effort to suspend and ban him from amateur competition altogether. The incident illustrates the deep-rooted antisemitism that existed in America at that time: a period when Fred Rubien, president of the Metropolitan Association of the Amateur Athletic Union, would intentionally look to destroy Kiviat’s career as a runner.

But track and field was such an important part of national athletics in America during the early to mid-1900s that despite antisemitism Kiviat was mentioned regularly in the sports sections of all the big New York newspapers, including The New York Times, the New York Evening Mail and the New York Tribune, as well as in papers outside the city, such as the Boston Globe, and as far away as London’s Daily Telegraph.

Keep in mind that Kiviat’s popularity arrived prior to Sandy Koufax’s Hall of Fame pitching career and swimmer Mark Spitz’s historic run at the 1972 Olympic Games. Sam Friedland, who would later make a name for himself as a supermarket mogul after founding Food Fair Inc., explained the sensation felt by younger Jews during Kiviat’s rise to fame, a time when an individual such as Friedland had felt the absence of a great Jewish athlete.

“Baseball was Irish and German in the McGraw and Wagner days….Boxing was Sullivan Corbett and Fitzsimmons. Then, out of complete void of Jewish athletics, the name Abel Kiviat started to show up regularly on the sport pages…We Jewish kids, who could read, started to walk a little straighter. We had a hero, a Jew who could beat goyim.”

Alex Suskind is a freelance writer living in Queens. He has written for International Musician Journal, Making Music Magazine and Wax Poetics.