A Lover of Boxing Copes With a Hero’s Loss 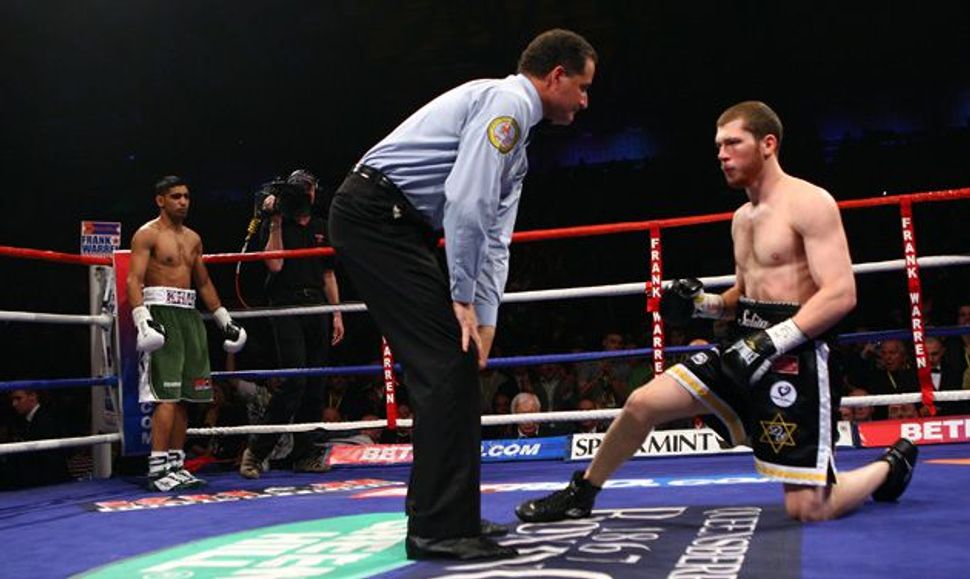 On December 5, in Newcastle, England, Dmitriy “Star of David” Salita — born in Ukraine but raised, coached and tutored in Talmud in Brooklyn — stepped into the ring to fight Amir Khan, the Muslim “Pride of Bolton,” for the WBA light-welterweight title. On November 14, boxer and aspiring rabbi Yuri Foreman had won the WBA’s super welterweight title. Two Jewish champions within one month? A tantalizing possibility. 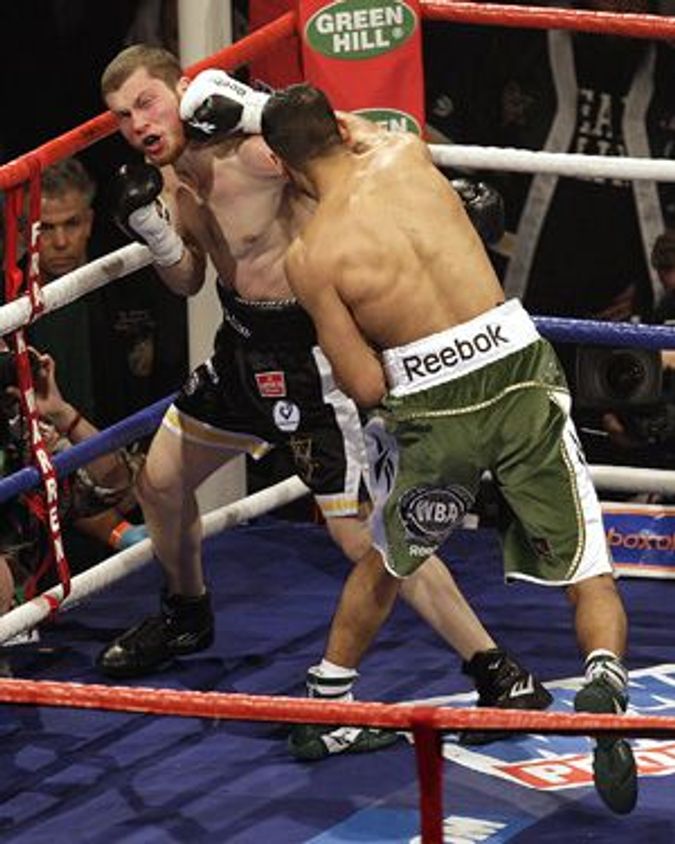 Although the Salita/Khan bout was inevitably cast as “Jew vs. Muslim,” it was really a battle between two exemplary young men. In the documentary film about Salita, “Orthodox Stance,” his unwavering focus and lack of pretension made him immensely likable. You couldn’t help but want him to succeed.

For a special thrill, watch the YouTube clip of Salita, the Star of David on his trunks, striding into the ring, accompanied by Hasidic reggae star Matisyahu. The singer’s long black coat is trailing, and he is singing a song he wrote especially for Salita.

Then there’s Olympic medalist and reigning world champion Khan, who they say can throw five punches a second. I wanted to dislike him, because I was rooting for Salita, but Khan’s a bit of a hero himself. He comes from a working-class suburb and his heritage is Punjabi, which, like the history of the Jewish people, has its own complicated diaspora. Khan feels the sting of being an outsider when the crowds boo him. “It’s probably jealousy, and sometimes skin color does make a differ- ence. I know if I was a white English fighter, I’d be a superstar,” he said.

My forthcoming book, “Blows to the Head: How Boxing Changed My Mind,” discusses how boxing, for better or for worse, pulls out pride in ethnicity like a taffy machine. In fact, in my mid-50s, I myself rose from my psychotherapist chair to take up boxing. I had broken my ankle, and in physical therapy I was drawn to boxing gloves like they were crusted in diamonds. I couldn’t figure out why they called out to me. Jews were the pale scholars. We weren’t supposed to be athletic, let alone fight. Don’t e-mail the gods about your needs or ambitions; let’s just try to get by. And now I’m cheering Jewish boxers in distant lands.

The December 5 bout had failed to capture the British imagination, and it wasn’t available on American television, not even pay per view — but it nevertheless called to mind another massively influential and popular fight of the early 20th century. With war hovering, the 1938 heavyweight rematch between Detroit’s Joe Louis and Germany’s Max Schmeling was an ethnic Rorschach inkblot test.

African-American Louis was ironically cast as the “Great White Hope,” and drew together blacks and Jews. The more oppressive the Nazi regime grew, the more it wanted former paratrooper Schmeling to succeed. Yet Schmeling was a complex character. He kept two young Jewish boys safe from harm in his Berlin hotel room during the rampage of Kristallnacht in November 1938, and his manager, Joe Jacobs, was an observant Jew. But the world’s transference to these two figures was in full blossom and couldn’t be stopped.

We project what we want onto public figures. The night before the bout, I dreamed of the 27-year-old Salita. We were on a date, in a state of surreal appreciation of each other. I gazed at his wholesome and agreeable face. But he’s so young and I’m so old! And he’s — Orthodox! I’m sure he’ll reject me when he finds out I’m not observant.

Salita was taunted with antisemitic slurs as a little boy in his native country. He started to fight back. In Brooklyn the taunts continued; this time, because the family was on welfare. He wanted both to defend himself and to get away from poverty; boxing was an escape. Salita says he also found God through boxing, and the fighter travels to his bouts with his assistant, Israel Liberow, a Chabad follower who cooks kosher meals on a George Foreman Grill in their hotel rooms. Salita’s devout practices may make him seem an unlikely contender, but he makes it work. He is, in fact, a throwback to Jewish champions from the early part of the 20th century whose immigrant mothers considered boxing a shande but couldn’t deny that their sons made more money boxing than in the sweatshops.

The night of the fight, my live Internet stream from Newcastle kept threatening to freeze. I jumped up and down, frustrated, eager: “I gotta see my boy fight!” There were 10,000 people in the arena, and 52,000 viewers on my stream. Within a few moments of the bout starting, only 18,000 viewers remained, because Khan had stopped Salita in the first round, within 76 seconds.

Khan had used a combo of a hard jab and lightning-quick right, just like he had practiced with trainer Freddie Roach. Salita dropped; his legs buckled, and his eyes were gone. Valiantly, he rose, while Khan advanced, keeping the pressure on. Another left from Khan, and it was clear that Salita had never really had a chance to recover from the first blow. Salita rose again, only to be quickly dropped to one knee. Another right from Khan, and Salita hit the ropes. Referee Luis Pavon called the fight.

I held my head in my hands, shocked at seeing Salita go down so quickly, disappointed that I wouldn’t get to see him really box. Salita came with a record of 30 wins and one draw, but when Khan brought him to his knees and he fell back against the ropes, I cried. I saw every little boy who’d been bullied. My husband stood by my side. “This is the first time I’ve ever seen you cry over a sports event,” he said.

Khan had his own profound upset in December 2008, when, like Salita, he was unceremoniously knocked out in the first round by Breidis Prescott. In an interview after the Salita fight, Khan said that the loss to Prescott was a blessing in disguise. Then he wished everyone a Merry Christmas.

While antisemitic slurs appear on YouTube postings of the fight, Salita’s Facebook page is cluttered with positive sentiments: “There will be a next time!…” “Mazel tov, you will be back….” “You have to go down to go up higher!” “You’re a modern-day Maccabee!”

Tomorrow, my coach will tenderly wrap my hands and we will spar. I wonder what’s next for Salita. Who knows whether or not we are truly in for the rise of a new wave of Jewish champions. Maybe this defeat will be Salita’s “blessing in disguise,” as Khan’s was for him. Boxing is a sport that allows unlikely contenders to dream.

A Lover of Boxing Copes With a Hero’s Loss