Kosher Activists Strive To Slaughter With a Conscience 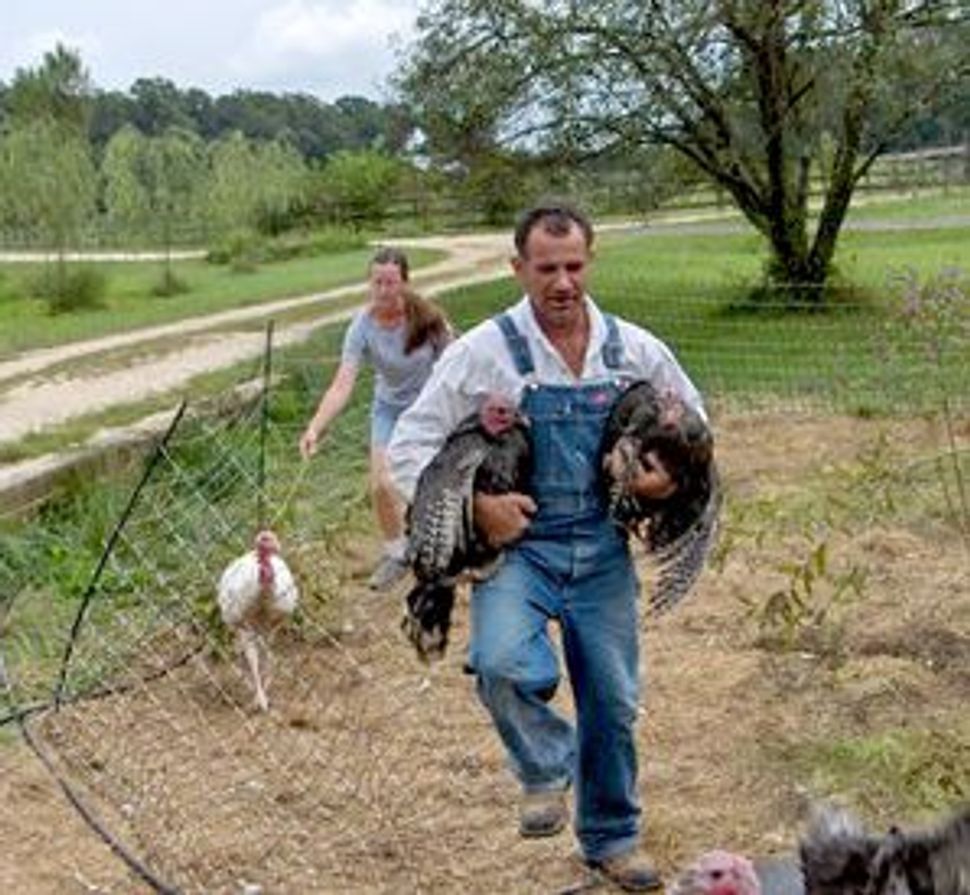 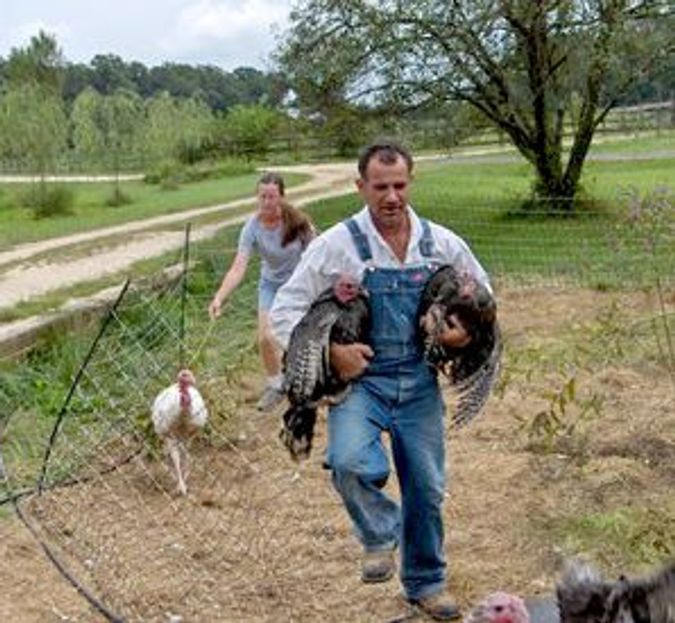 It took the founder of Kosher Conscience, Simon Feil, many months to find a shochet, or Jewish ritual slaughterer, who could do the job, and then Feil needed to find a flock of free-range heirloom breed turkeys. But he was not content to deal only with the logistics. When the first turkey went under the knife, Feil was there to cradle it in his arms — feeling the “solemn experience,” as he put it, of life leaving a body.

“It was an emotional day, and I’m still trying to process all the reactions I had to it,” Feil said a few hours after the first turkeys were slaughtered. “You really watch something that is a living creature turn into meat.”

Feil is part of an emerging movement of people attempting to deepen the connection between Jews and what they eat. Judaism has always put a spiritual value on food, but controversies at the nation’s largest kosher slaughterhouse — along with the publication of several best-selling books on the safety and humanity of food processing in general — have led to a push to infuse kosher food with the values of organic and free-range products. During the past year alone, innumerable seminars and committees have been dedicated to the topic. One such committee created the Heckscher Tzedek, or Justice Certification, which aims to certify the environmental and labor conditions behind kosher food.

Now, in the midst of harvest season, the first groups have progressed to actually slaughtering their own meat. For many of the idealists concerned, the personal involvement in slaughter is raising questions more thorny than all the talk that preceded it.

“‘Meat’ is a euphemism,” said Nigel Savage, a recipient of one of Feil’s 24 Thanksgiving turkeys. “‘Meat’ is a word we use to partially shield ourselves from the fact that we are eating a dead animal. I say that while noting that I am not a vegetarian.”

Savage is the founder of Hazon, an organization dedicated to exploring Judaism and food. Hazon has been at the center of some of the difficult recent questions. A few months back, Savage announced that the organization would publicly slaughter a goat at its food conference in December so that all the attendees could see where meat came from. The organization would then serve it at the conference’s Sabbath meal.

The announcement was made on Hazon’s blog, The Jew and the Carrot, and it drew a quick barrage of comments. A number of Hazon supporters were effusive in their praise for the idea.

“I would hope that many vegetarians would be excited that so many meat eaters want to know where their meat comes from and want to be a part of the process rather than naively purchasing something packaged from the store,” wrote Jeffrey Yoskowitz, a commenter.

But some suggested that Savage and the city-dwelling staff of Hazon had a rather shallow grasp of animal husbandry — noting that a picture of a sheep accompanied the blog post about the goat. There was also a vigorous debate about what Jewish law says about eating meat.

Michael Croland, author of the blog HeebNVegan, has written about the goat slaughter extensively and told the Forward: “Clearly, the Jewish community is not just blindly accepting the public slaughter of a terrified animal. Slaughtering a goat in front of a gawking crowd is a textbook case of causing tzaar baalei chayim,” the Hebrew term for unnecessary animal suffering.

Savage said that he understands all sides of the debate. Until a few years ago, he said, he believed that eating meat in any form was wrong. But like many in the food world, Savage has been influenced by the work of Michael Pollan, a journalist who has written about developing a personal relationship with food. That writing, along with experiences at a Jewish retreat center, convinced Savage that raising and eating meat could be part of a natural cycle.

Hazon’s role in the discussion over the ethics of food precedes the December conference. The organization was founded in 2000, and in 2004 it helped create the first Jewish Community Supported Agriculture program. At that time, a synagogue in Manhattan paired up with a farm on Long Island to purchase organic produce. Synagogue members were also offered visits to the farm. Nine more communities have created similar Hazon agriculture programs since then, and another eight communities will be added next year from 27 that expressed interest.

But until this year, these agriculture groups were dealing only in vegetables, which have few formal kosher components. Meat is an entirely different undertaking, requiring a dedicated staff. The first one to enter this fray was a Hazon agricultural group connected to a conservative synagogue in Washington. Kosher Organic Local Foods, as it is known, killed two cows in July, producing 400 pounds of meat.

The founder of Kosher Organic Local Foods, Devora Kimelman-Block, a mother of two, scouted out the local farmer who provides the cows and a kosher slaughterer who has done the slaughtering. After seeing her farmer’s children, Kimelman-Block decided to bring out her own children to the farm to take part in the slaughter. Last week they were there for the preparation of 60 Thanksgiving chickens.

“They were aware that it was a big deal,” Kimelman-Block said. “They really wanted to see it, and they were not traumatized.”

Kimelman-Block tried to re-create this experience for the other members of her synagogue by organizing a Sabbath meat event over the summer: a chicken dinner during which diners heard lectures from the farmer, slaughterer, kosher certifier and butcher behind their meal.

“In this day and age, where food travels 1,500 miles to get to your plate,” Kimelman-Block said, “it’s amazing that all these people were there in the same room.”

The Hazon conference in a few weeks will be about more than just meat slaughter. There will be a session on urban worm composting and another on Jewish body-image issues, the latter led by the daughter of the former owner of the Second Avenue Deli.

But the Hazon organizers are taking care to deal with the tense back and forth about the slaughter of animals. All the participants who want to attend the goat slaughter will have to be present at a session the previous night with the goatherd that raised the goats, the slaughterer, the kosher certifier, or mashgiach, and the butcher. Only participants older than bar or bat mitzvah age will be allowed to participate.

The current plan is to slaughter three goats on the morning of December 7 in a barn near the conference in Connecticut. The next day, the goat will be served in a Sabbath stew at lunchtime. Savage, the man who kicked off all this, is approaching the event with some uncertainty about what it will mean to him personally.

“I’ve never in my life been given the opportunity or responsibility of eating an animal that I have killed,” Savage said. “I don’t know what that feels like — and I don’t know whether I’m capable of doing it.”

Kosher Activists Strive To Slaughter With a Conscience