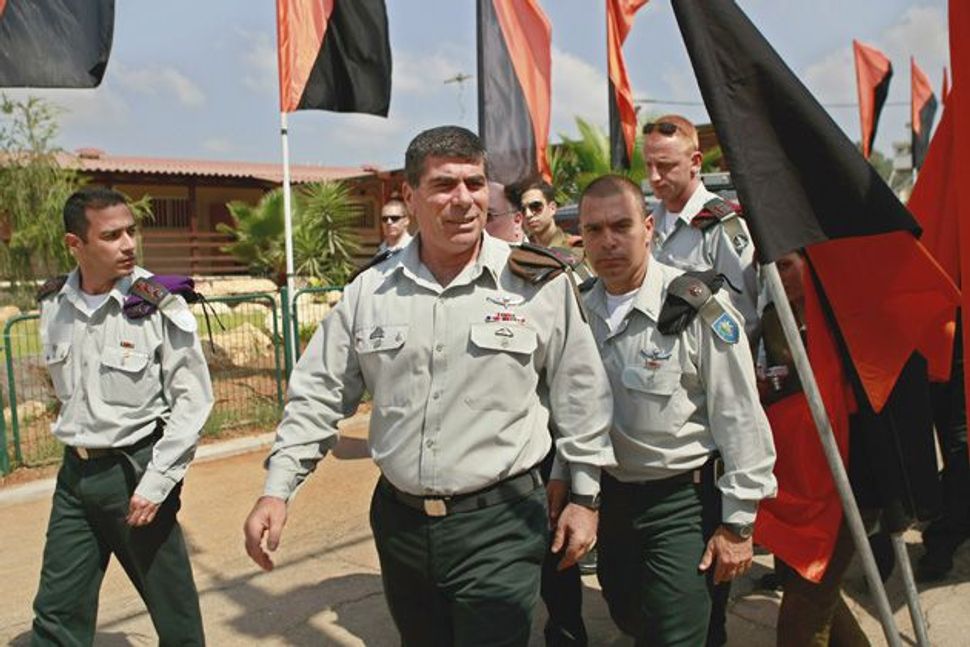 Draft Culture: Gabi Ashkenazi, center, the IDF chief of staff, warned against the disintegration of the military draft culture. Image by Getty Images

A growing gap between the size of the Orthodox Jewish population in Israel and the number of women who are receiving exemption from military service on religious grounds has prompted a move in the Knesset to clamp down on those who may be lying about their beliefs to avoid army service.

In recent months, the Israel Defense Forces has employed private investigators to track some women who were exempt from military service. The IDF concluded that some were lying about their piety, including some who were caught breaking religious Sabbath laws.

An IDF spokesman said that of those getting exemptions on religious grounds “many of these girls take advantage of the IDF’s current policy in order to dodge their IDF duty.”

Military exemptions for men are limited to Haredi who are studying full time in yeshiva. But with women, both the Haredi and Modern Orthodox communities tend not to serve, although many Modern Orthodox women choose to perform civil national service instead. Women who want an exemption on religious grounds need only inform a rabbi in a rabbinical court that they are observant, and then they are freed from service without any conditions about how they must use the time they would have spent in uniform.

In recent years, a discrepancy has arisen between the size of the observant population and the percentage of 18-year-old women who are supposedly religious. Around one in five Israelis is an Orthodox Jew, but some 36% of all women due for enlistment claim exemptions on religious grounds, prompting concerns in the IDF that receiving exemptions has become too easy. An IDF spokesman told the Forward that the military is witnessing a “widespread phenomenon where many girls who are not religious — and in some cases, aren’t even Jewish — are exempt from their service based on their claims that they are religious.”

Currently, once the IDF has given a woman a dispensation, it cannot reverse it, even if officials find evidence to suggest that it was granted on false pretenses. The IDF’s only recourse is to bring suit, which it’s usually reluctant to do, taking the view that it has little to gain.

But in early December, the government’s legislation committee approved a bill that would empower the IDF to challenge an exempted woman until her 20th birthday and bring her before a panel of military officials and rabbis to prove her piety. If the panel concludes that she received her exemption on false pretenses, it would have the power to draft her.

The bill has emerged as the IDF’s top brass is voicing its concerns about the disintegration of the draft culture in Israel. In early December, IDF Chief of Staff Gabi Ashkenazi told a conference of school principals that he is worried that there could unfold a “reality in which perhaps only a few will enlist in the IDF.” This also comes as the IDF is opening doors that had been closed to women. Walda Boldesko, 22, recently became one of the first women ordnance officers in an IDF combat unit, and some women have begun taking part in reserve duty.

One of the proponents of the bill, Justice Minister Yaakov Neeman, who heads the government’s legislation committee, regards it as a common-sense move to remedy abuse of an existing law. His spokeswoman, Tamar Steyner, told the Forward that he “thinks that a girl who avoids the army by claiming to be religious when she is not raises a very serious situation.”

The main religious-Zionist faction in the Knesset’s Habayit Hayehudi, or Jewish Home, a coalition party, agrees. Party chairman Daniel Hershkowitz told the Forward that a woman’s avoidance of army service on false pretenses “is a criminal violation and should be enforced as any criminal violation.”

Theoretically, given that the bill is a government initiative, it should pass easily when it comes up for two Knesset votes early next year. But the Haredi parties inside the coalition, United Torah Judaism and Shas, are determined to defeat it, and without their combined strength of 16 seats, Prime Minister Benjamin Netanyahu would lose his majority in the Knesset. A United Torah Judaism insider told the Forward that the party is threatening to create a coalition crisis if the bill goes ahead.

When it comes to drafting men, Haredi rabbis have argued that it is inappropriate for their followers, but they have not advanced the argument that it is wrong, period. In contrast, they consider it unacceptable in principle to draft women into the army, meaning that their objection holds for any woman, religious or secular.

As a consequence, Haredi politicians have reluctantly accepted that there is a female draft in Israel, but they stand firmly opposed to any modification to make it wider — even if by just enforcing existing rules. “It’s the status quo,” Yerach Tucker, spokesman for United Torah Judaism lawmaker Moshe Gafni, said. “There is a coalition agreement not to touch the status quo. Today this, and tomorrow something else — we don’t want to touch it.”

United Torah Judaism, he said, objects to the idea that a woman should be subjected to checks on her observance if she receives an exemption. He said that being exempted from army service should be the right of women who are not completely observant but who have a concern for modesty — what Gafni termed the “traditional sector.” In the Knesset, he called the dispute “an ideological battle against traditionalists.”

Shas spokesman Roi Lachmanovitch told the Forward that his party fears that, in effect, the army will end up passing judgment on a woman’s piety, and that the rabbis on the panels will be sidelined.

As Haredi lawmakers are voicing fury over the bill, some lawmakers from the opposition Kadima party are saying that it does not go far enough. Kadima’s Israel Hasson is advancing a rival bill that would require women who want exemptions to prove that they studied in a religious school for at least three years.

This has raised a new objection from United Torah Judaism — that newly religious women could end up being drafted. “A ba’alat teshuva [newly religious woman] who did not go to school in a religious place and who is new to being Haredi could be forced to serve,” Tucker said.

But Hasson said that an objective criterion such as proof of religious schooling is necessary because if the IDF tries to establish whether people are genuinely religious by a less clearly defined standard, it will open up a can of worms. “In the 62 years, the State of Israel hasn’t been able to decide who is a Jew, and now the army is expected to decide who is a religious Jew,” he said.