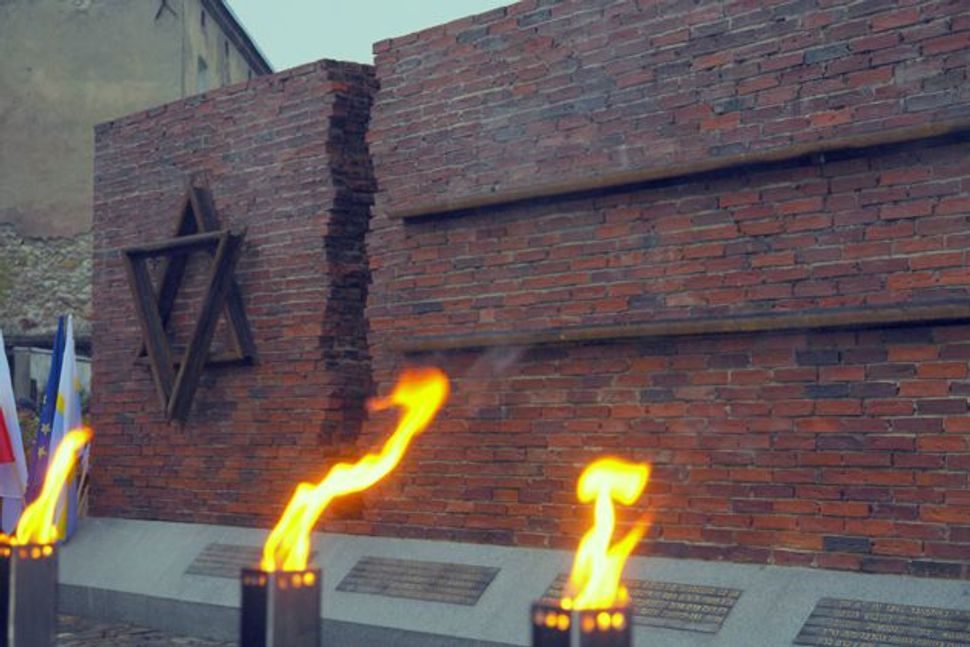 The newly unveiled monument to the 40,000 Jews sent to the Treblinka death camp (Courtesy of Krzysztof Galica).

Sigmund Rolat was a penniless orphan when Soviet troops freed him from a Nazi slave-labor camp in Czestochowa, Poland in January 1945.

When he came to the United States in 1948, he had $8 in his pocket, which was stolen soon after he arrived. Today, he is a wealthy New York businessman, having made a fortune in international finance, and by selling denim in Poland after the collapse of communism — an idea that came to him when he saw a picture of West German teenagers sitting on the crumbling Berlin Wall in 1989.

“That iconic picture showed all of them wearing jeans — the uniform of freedom,” Rolat told me in an interview. He exported 9 million yards of denim to Poland in 1991 and 1992.

It was this business re-engagement with the land of his birth that led Rolat to become a prime financial supporter and ambassador for restoring Polish Jewry’s place in Polish history. Today, Rolat is a key backer of the annual Krakow Jewish Culture Festival; a planned museum of Polish Jewry in Warsaw; and the recent return of hundreds of survivors and their families to his native town of Czestochowa.

He is the latest — and maybe last — of a fading breed: penniless Holocaust survivors who came to America after World War II, their personal family losses like fresh, raw wounds, who put all that aside to focus on surviving, and then thriving, in their new home.

Like many of these now deceased philanthropists — real estate mogul and World War II Polish partisan Miles Lerman; New Jersey construction magnate and Warsaw Ghetto veteran Sam Halperin; import-export millionaire and death camp survivor Jack Eisner come to mind — Rolat is devoting much of his fortune to memorializing his experience as a Jew in Europe.

The pattern is no accident. “Every survivor survived because of luck,” says Holocaust scholar Michael Berenbaum. “But no one survived without skill and drive, as well, without a will of iron and the ability to move mountains. That’s what they brought here with them.”

Rolat, 79, lives on Manhattan’s Park Avenue in an apartment that occupies an entire floor. Recovering from recent back surgery, he has difficulty standing and walking. His physical limitations, however, have not tempered his determination to educate future generations about the history of Polish Jews.

His resolve has found its focus in the Museum of the History of Polish Jews, which is scheduled to open in 2012 on the site of the former Warsaw Ghetto. Conceived as a three-dimensional showcase for the millennium-long Jewish presence in Poland — with the Holocaust as its tragic coda — the ambitious project would have been impossible to advance without Rolat as its driving force.

“People who come to Poland will no longer just be taken on a tour of the triangle of death — the German concentration camps,” he said. “They will see where Jews lived for 1,000 years, in good times and bad… where they fought for Poland and where they created so much.” The Holocaust will be “its defining chapter,” Rolat said. But it will deal with “life in Poland before the Holocaust, and the renaissance of Jewish life now.”

The Polish government and the City of Warsaw are funding the construction and paying the staff. Rolat, a member of the board of directors, is also chairman of The North American Council of the Museum of the History of Polish Jews, which raises money for the museum’s programs and content.

Conversations with Rolat are frequently interrupted by flurries of calls from Warsaw about the progress of the museum, or about people in need and institutions that will not survive without support.

Rolat’s funding also makes possible the annual Krakow Festival of Jewish Culture, an eight-day summer extravaganza in which the ghost of Jewish life in Poland’s second-largest city springs back to life. The festival features scores of films, along with theatrical productions, musicians, historical exhibits and lectures attended not just by Jews from around the world, but by thousands of Poles who flock to the synagogues, cellars, theaters and cafes of the former Jewish district of Kazimierz. The event culminates in a nationally televised concert typically attended by about 20,000 people.

Rolat is also determined to tell the world that there were Polish Jews who fought during the Holocaust, not just passive victims.

“I want to kill the terrible lie that Jews went to their deaths without fighting,” he said.

Rolat was 12 when the Nazis killed his older brother, Jerzyk Rozenblat, a resistance fighter. “He was my hero,” Rolat said, recalling the last time he and his brother were together. “He told me never to forget who I was and what I saw.”

Rolat’s father, Henryk Rozenblat, also died fighting. He was part of a Jewish uprising against the Nazi guards at Treblinka.

Rolat’s relentless determination was very much in evidence at the October 2009 reunion of the organization known as The World Society of Czestochowa Jews and Their Descendants, which he organized.

Despite his wrenching back pain, Rolat worked for months planning the reunion. He also covered the expenses for those otherwise unable to attend.

“I often got by on two hours of sleep a night,” Rolat told me as I accompanied him at this reunion. “But it had to be done.”

The full day of memorial events began in the Jewish cemetery.

Dozens of mourners, many with tears in their eyes, trekked through the mud as they wound their way through a neglected cemetery overtaken by dark woods. Fallen gravestones, many broken, lay strewn along the path. Moss blurred the names on most of the stones.

Parents, grandparents and great-grandparents of some of the 300 participants who came to the reunion from all over the world are buried in this cemetery.

“It breaks my heart,” I heard a woman behind me say, devastated by the sight of this cemetery in ruins. We were making our way through the mud, most of us shivering in the cold autumn rain.

It is one of Rolat’s objectives to clean up this long-neglected cemetery. It is where his brother Jerzyk was shot to death on March 19, 1943, at age 18 and buried with five fellow resistance fighters. Rolat’s mother also died in this cemetery, killed in July 1943 when 600 Jewish men, women and children were executed and buried in a mass grave.

Despite these horrendous memories, Rolat speaks fondly of his prewar childhood in Czestochowa.

“It was my native city. We had parks. We had movies. We had a Jewish hospital. Jews were present in the Polish Parliament,” Rolat said.

This life ended abruptly with the German invasion of Poland in September 1939. Rolat was 9 years old and scheduled to begin fourth grade on the day of the invasion. Instead, he ended up in a German slave-labor munitions factory.

He was able to maintain a sense of optimism. “I always knew that I would survive,” he said.

After the war, Rolat joined an aunt in Munich, Germany, who arranged for an elderly German professor, Eugen Zippe, to tutor him. Rolat, who had missed seven years of school, described Zippe, as a “wonderful man” who “dedicated all his waking hours to my education.” Rolat studied with him six hours a day, with three additional hours of homework. “I was determined to make up for lost time,” Rolat said.

He passed his secondary school equivalency test in Europe and came to the United States in 1948. Based on his accomplishments up to then, he was accepted at the University of Cincinnati. But first he needed to learn English — which, he recalls proudly, he did in three months.

The 2009 Czestochowa reunion went a long way toward fulfilling Rolat’s sense of obligation to memorialize the experiences of his youth. The day that began in the cemetery ended on the spot where the trains left for Treblinka.

On the way, in a grassy clearing, the group gathered for a solemn ceremony that included Tadeusz Wrona, mayor of Czestochowa, and Michael Schudrich, chief rabbi of Poland, among the dignitaries.

Rolat stood with his 9-year-old grandson, Henry, beside him, his face anguished, his bent-over frame enduring the day’s emotional and physical assault.

The group also stopped at the site of the munitions plant of the Hugo Schneider Aktiengesellschaft, a slave-labor camp established by the Nazis in what had been a textile factory. This is where Rolat came with his mother in June 1943. It was where he saw her for the last time.

Rolat was among 30 children saved by the German factory director, a man named Litt (Rolat does not recall his first name). Litt gave the children menial jobs and repeatedly foiled attempts by the SS to execute them. “I owe my life to Litt,” Rolat said. “And I don’t know to this day why he did it.”

The day’s activities culminated in late afternoon at the Umschlagplatz, the site of the Czestochowa railroad station, from which 40,000 Jews were sent to their deaths at Treblinka beginning in September 1942, the day after Yom Kippur. A monument, commissioned by Rolat and designed by Holocaust survivor Samuel Willenberg, was unveiled. Like Rolat’s father, Willenberg, who now lives in Israel, participated in the uprising at Treblinka.

The memorial is a brick wall, broken in two, with rails as tracks on one side and a Magen David on the other, also made from rails. According to Willenberg, the break in the wall symbolizes the breaking of the nation, the people of Israel.

“All the Jewishness was broken,” Willenberg said through an interpreter, his voice booming. “The rails are in the image of those sent to Treblinka, crammed into cattle cars, while the Magen David stands for the Jewish people who continue to live.” The ultimate message, Willenberg said, is am Yisrael chai — the people of Israel live.

As the memorial was unveiled in the rain, Rolat, exhausted, addressed the mourners. The day grew colder with nightfall. “The importance of this monument can be summarized in one word,” he said. “Memory.”