Baptist From Virginia Toils for Jewish Library in Vilnius 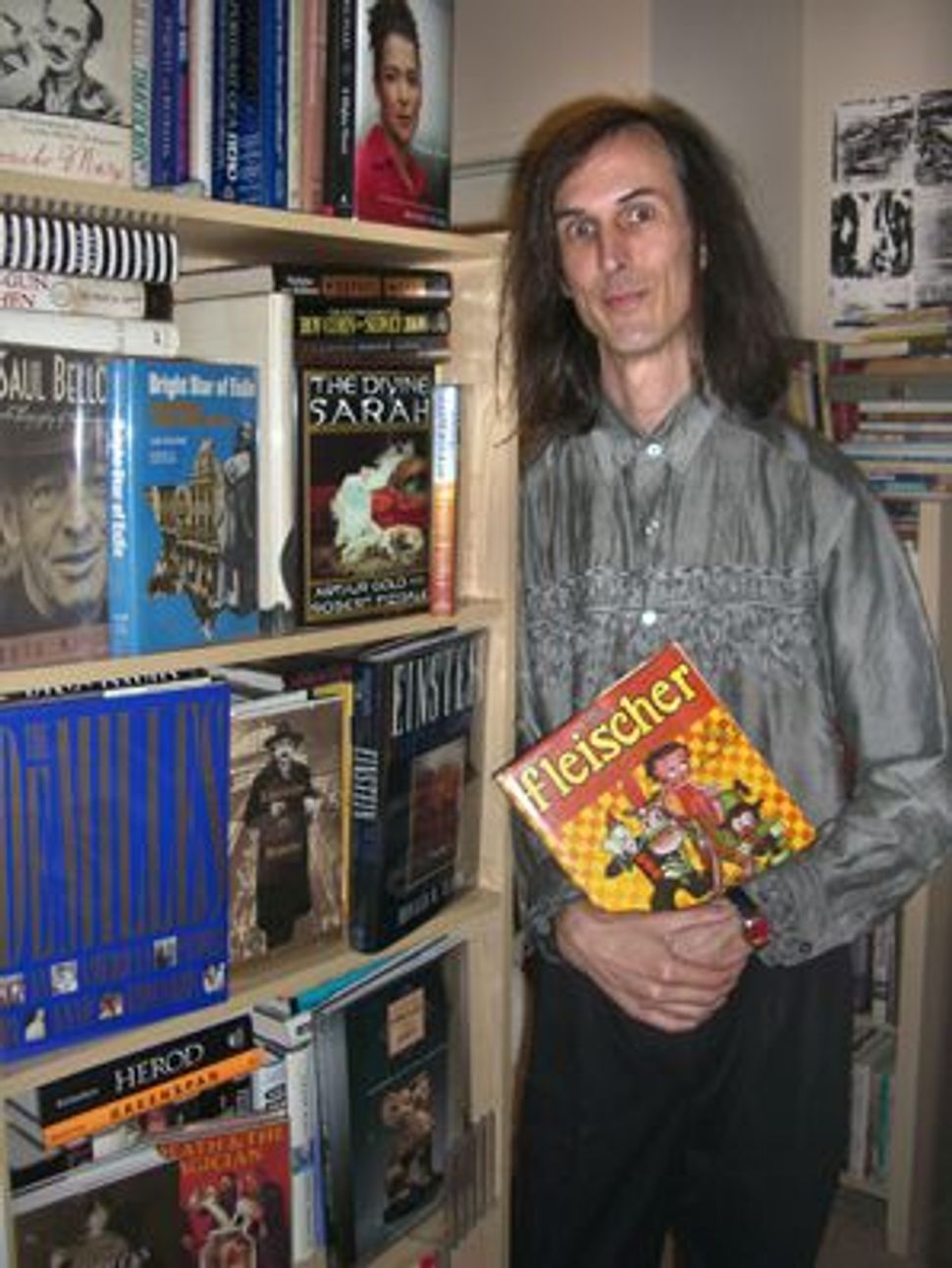 BRENT: Bookseller is amassing a collection of English- language material for a future library in Lithuania

San Diego — If one longtime San Diego resident fulfills his life’s dream, Vilnius, Lithuania, will once again emerge as a capital of Jewish life in Eastern Europe. 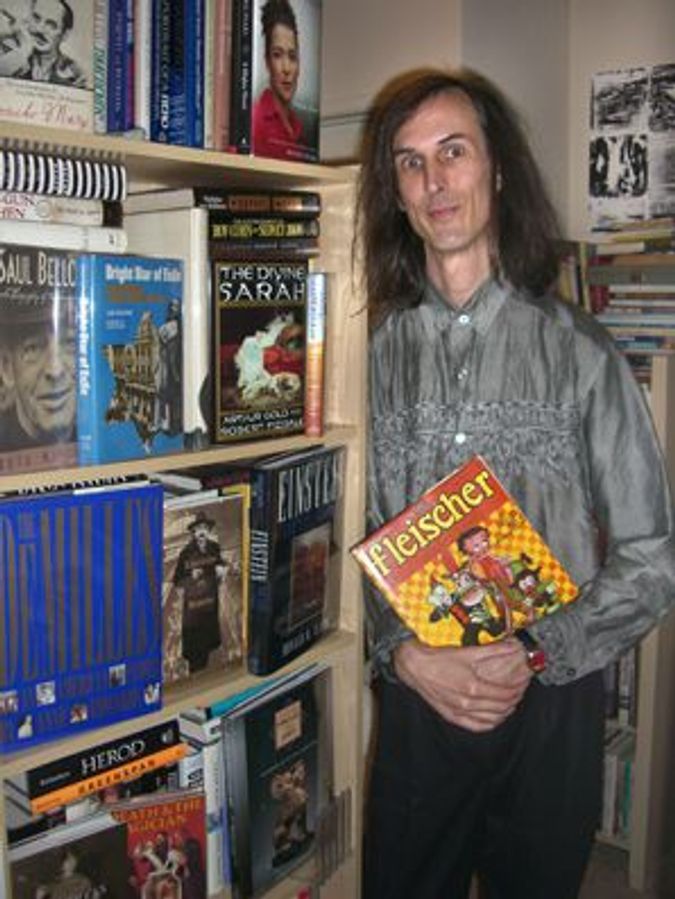 BRENT: Bookseller is amassing a collection of English- language material for a future library in Lithuania

But the man in question is a strange candidate for the task: He is neither a Yiddish scholar nor a Holocaust survivor, nor is he a descendant of the Vilna Gaon — the great 18th-century talmudic scholar of Vilna — looking to resurrect an ancestral legacy.

This unlikely champion of a Jewish renaissance in Vilnius, which in pre-Holocaust days was known as Vilna and served as one of Eastern Europe’s centers of Jewish cultural and intellectual life, is, however, steadfastly committed to realizing his vision. If Brent, who grew up in a Baptist household in Virginia and never earned a college degree, has his way, he will build the Vilnius Jewish Library, a repository for 100,000 books, all in English, that are either written by Jewish authors or explore Jewish themes.

While Vilnius has a museum that exhibits artifacts from the once robust community, the Vilna Gaon Jewish State Museum, and a recent effort to rebuild the city’s Great Synagogue is under way, Brent is hoping that his library will not just pay homage to a rich Jewish past but, in fact, also help to re-infuse Vilnius with the Jewish intellectual spirit that was once its hallmark.

For the past three years, Brent, who earns a modest living by selling books, records and other items over the Internet, has been collecting used books with the help of his Italian-born roommate, Carla Remondini, in the hopes that they will someday line the shelves of the library.

“It’s almost an obsession,” Brent, 45, said during an interview in his living room. “I don’t drink, smoke or gamble. I just collect books.”

What is not clear is how Brent will realize his ambitious goal. With no institutional backing and no financial support from the Jewish community, Brent is a one-man show. For now, the modest three-room apartment that he shares with Remondini in San Diego, not far from the Mexican border, serves as the temporary home for the 2,700 books they have collected to date. In the living room, a novel by pop author Danielle Steel rests on a shelf across from biographies of Bette Midler and Tom Stoppard. But in the office, more serious subject matter resides: Brent’s collection of Holocaust-related books sits on a freestanding bookshelf in the center of the room, the result of not enough wall space to house his many treasures. He even has books crammed into the kitchen cabinets.

Brent and Remondini, who met in 1994 at a train station in Lithuania, scour thrift shops, the Internet and swap meets, all with the intention of building the collection. Brent, who has lived all over Eastern Europe, including a seven-month stint in the Soviet Union during communism’s collapse, explained that the inspiration for his idea actually came three years ago, after Remondini, a nurse who is also not Jewish, penned an article for The Jerusalem Post on the Jews of Tijuana, Mexico.

At that moment, Brent said, “something just crystallized.” He realized that his love of Eastern Europe, and particularly his growing fascination with the Jews of the region, should be translated into the Vilnius Jewish Library, where he hopes to serve as shammes, Yiddish for “caretaker.”

Roughly 4,000 Jews remain in Vilna, and they have kept a low profile in recent years. Aviva Astrinsky, head librarian of YIVO Institute for Jewish Research — the New York-based resource center and archive on Ashkenazic Jewry that was originally founded in Vilna in 1925 as a center for the study of Yiddish life in Eastern Europe — cautioned that Brent’s activities could have the unintended consequence of feeding the growing wave of antisemitism that has taken hold there. “It’s not like America, where you flaunt your ethnicity,” she said.

Brent, however, cognizant of such criticisms, has concluded that it will work in his favor that he is not Jewish. And despite her concern, Astrinsky was not entirely dismissive of Brent’s idea. “I don’t think it’s totally preposterous,” she said. “If he can do it, let him do it.” She added, however, that she would prefer to see Yiddish books, not English tomes, sent to Vilnius.

Brent, with a crop of shoulder-length black hair and a gaunt face that lends him a somewhat monkish appearance, said that he plans for his library to be different from the existing institutions. He hopes to make the library into a center for all Lithuanians — not just Jews and tourists — that will double as an English-language learning center. What better way to surreptitiously trick Lithuanians into learning about Jewish culture, he said, than to provide them with a vast resource of English reading material. “Even if people aren’t interested in Jewish culture, they can come to learn English, and they’ll be absorbing bits of Jewish history,” he said.

Over the past year, Brent said, he has sent letters to 36 Jewish groups in the San Diego area, seeking support for his project, but has gotten no response. Brent has been working in a vacuum; he is not even on the radar screen of San Diego’s Jewish Federation, or of local synagogues contacted by the Forward.

Now, he is setting out to fulfill his vision by picking up stakes and moving to Vilnius. “The realization comes that you can only collect books for so long,” he said. “Perhaps the Jewish community will take me more seriously if I live in Lithuania.”

Brent left for Vilnius on November 12. Before leaving, he arranged a meeting with Vilna Gaon museum officials, who he hopes can put him in touch with the Lithuanian ministry of culture. Brent already has his sights set on a dilapidated building near the city’s old quarter that he hopes the government will want to lend him for use as the library. If all goes according to plan, he will be living and working in his Jewish books center by September 2010, the 65th anniversary of the end of World War II.

On the way to Lithuania, however, Brent is stopping off in London, where in addition to visiting the city’s oldest synagogue, he will meet with Sir Martin Gilbert, Winston’s Churchill’s official biographer. Gilbert has, at least through e-mail correspondence, expressed enthusiasm for the project, Brent said. He has also pledged to donate to the library copies of all 79 books he has written or edited.

Though Brent has yet to corral the big funders he will ultimately need, he is buoyed by Martin’s interest. “If nothing else,” Brent said, “his support gives me strength to carry on.”

Baptist From Virginia Toils for Jewish Library in Vilnius