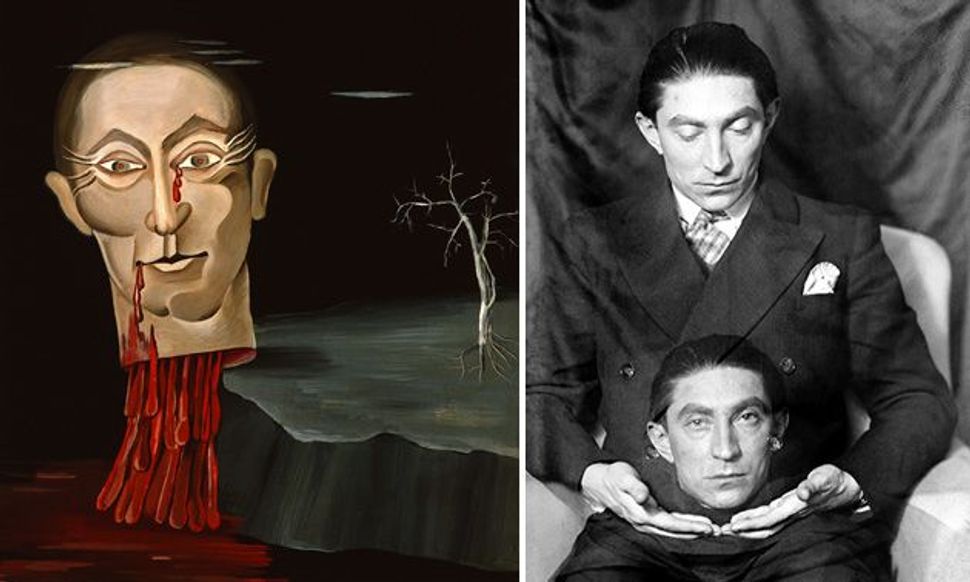 The Many Faces of Fondane: Man Ray made a photographic portrait of Fondane with two heads (right) but Victor Brauner?s oil portrait has Fondane as a beheaded Holofernes. Image by victor brauner, ?the head of benjamin fondane,? 1931 / MAN RAY

The mission of any historical museum is to recuperate what might be lost or forgotten by posterity, and Paris?s Shoah Memorial, which bills itself as a ?research, information, and awareness-raising center,? succeeds brilliantly with a new exhibit about Romanian-French poet, critic and filmmaker Benjamin Fondane.

An eponymous exhibit about Fondane, Benjamin Fondane, which opened on October 14 and runs until January 31, is accompanied by a fascinating catalog that urgently needs translation into English. Until it does, Fondane (born Benjamin Wechsler in 1898, and murdered in Auschwitz in 1944) will remain under-celebrated internationally.

Valiant efforts are being made by a small group of admirers in the B. Fondane Association, by co-creators of this exhibit, by French publisher Editions Verdier, which keeps some of Fondane?s works in print, and by a handful of academics, like Michael Weingrad. There is also Arta Lucescu Boutcher?s ?Rediscovering Benjamin Fondane? (Peter Lang Publishers, 2003), an academic study that deserves wider circulation. On top of this, but still in France, a new bibliography of Fondane?s works from Editions Non Lieu, and ?Between Jerusalem and Athens: Benjamin Fondane in Search of Judaism,? (?Entre Jérusalem et Athènes, Benjamin Fondane à la Recherche du Judaïsme?) from Editions Lethielleux, have just appeared. This latter work, which includes essays on Franz Kafka and Martin Buber, suggests that French publishers are finally waking up to this writer?s attraction.

Fondane, however, deserves to be celebrated outside France, as well, as his far-ranging gifts and accomplishments are at the heart of 20th-century Jewish artistic and philosophical modernism.

From his childhood in the Moldavian city of Iasi, where his grandfather Benjamin Schwarzfeld was a Hebrew-language poet and leader of the Haskalah movement, Fondane adopted the pen name ?Fundoianu,? after the name allotted to a patch of family farmland, to write in local Zionist periodicals alongside the pioneering Romanian-Yiddish poet Jacob Ashel Groper, poet-physician-essayist Avram Steuerman-Rodion and Zionist journalist Abraham Leib Zissu.

Fondane was also close to Romanian-Jewish modernists like Ilarie Voronca and Tristan Tzara, and like them, he was lured to France (in 1923) to flee Romanian antisemitism and approach a wider artistic world. Although once he arrived in Paris he Gallicized his name as Fondane, his poems remained deeply imbued with Jewish imagery, like ?Simple Song? (?Chanson Simple?) from 1922: ?Still, this shout erupts: ?I love you,/and I would love a stone if it were formed into Hebrew letters.??

Likewise, in 1933 he published a long poem, ?Ulysses,? in which he declared about Homer?s wandering protagonist, ?Jewish, naturally you were Jewish, Ulysses,? thereby following the precedent set by Leopold Bloom in James Joyce?s ?Ulysses? (1922). In 1934, Fondane also celebrated Marc Chagall in a key essay, praising that artist?s vision of a ?paradise of poverty, garlic, and pogroms, of bric-a-brac trade where one prays to a very ancient God, a flea-market God?. A paradise in which Chagall is hand-in-hand with I. L. Peretz, Sholom Aleichem, and Mendele Mocher Sforim.?

Simultaneously, Fondane was portrayed by artist friends like Man Ray, who elongated the poet?s head in funhouse-style photos, and his fellow Romanian-Jewish émigré, artist Victor Brauner, who in 1931 painted a horrifyingly prophetic surrealist oil on canvas, showing Fondane as a gorily beheaded Holofernes from the Book of Judith.

This kind of violence seems to echo Fondane?s own uncompromising artistic spirit. As a great lover of film (and director of ?Tararira,? a now sadly lost 1936 musical filmed in Argentina), Fondane did not take kindly to the advent of talkies, observing, ?As soon as films become garrulous, they become nationalist.? Likewise, in his unidealizing study ?Rimbaud the Thug? (?Rimbaud le Voyou?), Fondane protested against the genteel school of elegant literary biography (?What an invention of emasculated minds!?) as epitomized by French-Jewish author André Maurois (born Émile Herzog). Whether in poems or in essays, Fondane expressed himself in French that is exotic in its fever-pitch emotion, miles away from the coolly Cartesian prose style of such leading 1930s writers as André Gide.

Fondane was also a close friend and colleague of path-breaking Ukrainian-Jewish philosopher Lev Isaakovich Shestov (born Yehuda Leyb Schwarzmann), and eminent French-Jewish thinkers like sociologist Lucien Lévy-Bruhl and philosopher Jean Wahl. As the catalog for the Shoah Memorial exhibit percipiently notes, Fondane, like Paul Celan, Kafka and others, sought in the Bible an ?alternative to rational Western thought? with high spiritual standards and the strength to disobey.?

Fondane would doubtless have continued to follow this path of ardent literary and philosophical disobedience for decades longer had he not been arrested in March 1944, sent to the Drancy internment camp and then deported to Auschwitz, where he was gassed. While still at a Paris police station before being sent to Drancy, he fatalistically told his wife, Geneviève, ?If ever there was a Jew, an authentic Jew whom Hitler should have arrested, it?s me.?

Romanian-French aphorist Emil Cioran, a close friend of Fondane in his later years, often told me how he rushed to Gestapo headquarters in Paris to plead for Fondane?s release on the grounds of his great literary talent, assuming that because the famed Jean Cocteau managed to get the Nazis to free French-Jewish humorist Tristan Bernard from Drancy, where he had been deported, the then-unknown émigré Cioran might be equally successful. After Geneviève alerted other friends higher up in the French literary establishment, Fondane was indeed offered the chance to leave Drancy as the husband of an ?Aryan,? but his sister Line, who had been arrested with him, would have to remain. Fondane refused to abandon his sister under such circumstances, and both were deported to Auschwitz and killed.

The last descriptions of Fondane after his arrest heartbreakingly prove his kindness, humanity and unquenchable creative spirit. His friend, philosopher Stéphane Lupasco, recalled seeing Fondane at the police station just after his arrest, busy consoling a little Jewish girl who had been arrested as she left school, and who ?wept excruciatingly.? While still in Drancy, Fondane sent his wife lucidly typed instructions detailing what she should do with his literary remains, showing that he had no illusions about his future fate.

A fellow Auschwitz prisoner who survived the ordeal, Dr. Lazar Moscovici, would later recall how Fondane was brutalized, but although ?starving and enfeebled, his deep blue eyes were [still] lively.? Other witnesses recall him inventing poems, speaking them to fellow prisoners in Auschwitz ? poems now lost to posterity, just as Fondane?s achievements might have been, had it not been for the new publications and the majestic Shoah Memorial exhibit.