The Myth of Authenticity 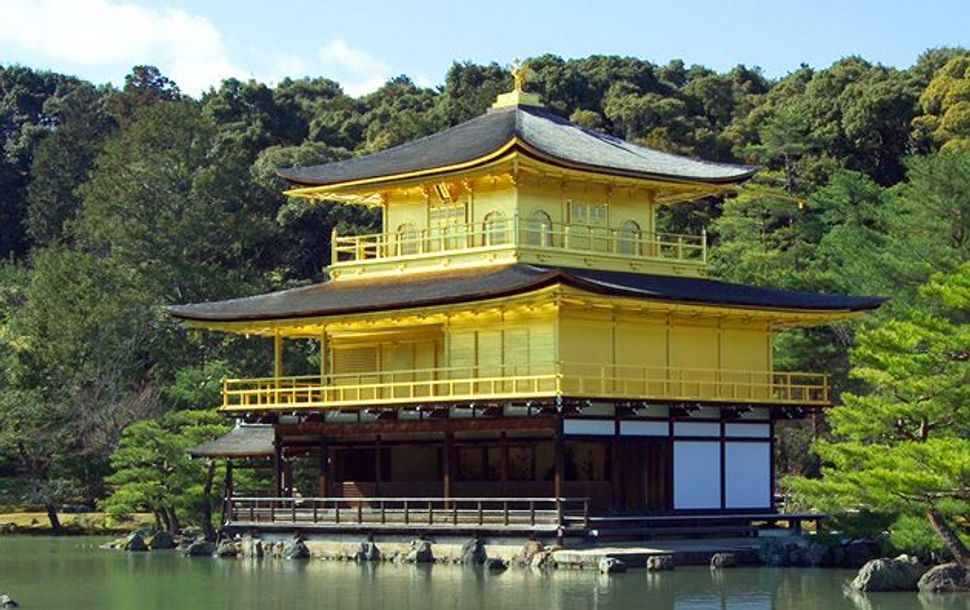 Kinkakuji (the Golden pavilion) in Kyoto: The Japanese tradition of rebuilding religious shrines through a continuous process of maintenance, repair and renovation means that, even before the 1950 fire, no single material piece of this building dated to its original construction in 1397. Image by wiki commons

American Jews of a certain class and culture have the scene engraved in their memories: Woody Allen?s Alvy Singer in ?Annie Hall? at Annie?s goyish parents? house, suddenly seen through their eyes as a Hasid, in a long black coat and peyes.

It?s a hilarious moment: Allen imagining how he is seen by non-Jews, giving us a great sight gag and, of course, capturing in just a few seconds of film the great anxiety of American Jews that we are ?too Jewish,? notwithstanding all our best efforts to assimilate.

I wonder, though, how many of us share the unstated assumption of the ?Annie Hall? gag: that to be Hasidic is ?really Jewish,? to be secular is not really Jewish, and everything else lies somewhere in between. How often has our culture set up ?Fiddler on the Roof? as an imagined Jewish ideal: real Jews in a real shtetl, practicing real Jewish traditions for the real Jewish God. Never mind that all these were creatures of fiction: what is most authentically Jewish, many of us believe, is the old-time religion (a non-Jewish term) of black hats and the Pale. Arguably, a similar trope crops up in this year?s ?A Serious Man,? which begins with an extended scene of a possible demonic possession, set in the shtetl and performed in Yiddish. As the film cuts to Minnesota from Eastern Europe, the sense of dislocation is palpable.

It?s not, of course, that we want to be the shtetl Jews of Anatevka ? only that we continue to see them as the ?real? ones, and the rest of us, well, as a kind of hybridization, or adaptation. Thus there persists in the American Jewish imagination an anxiety of inauthenticity ? that someone, somewhere, is the real Jew, but I?m not it.

The myth of authenticity, however, has got to go.

First, of course, it?s not historically accurate. Traditional Jews didn?t wear long black coats until the 18th century (notwithstanding some recent, and absurd, images of Moses crossing the Red Sea in a fur-lined shtrayml). Moreover, until the advent of modernity, the notion that if you were ?really? religious, you would dress anachronistically, simply did not arise in Jewish thought. Distinctive dress, modest dress, visible signs like the yarmulke, sure ? but never the idea that to be ?real? was to be so radically other from one?s own place and time. In fact, with only a few exceptions, everything that we think of as ?really Jewish? came along at a particular place and time, because of particular historical circumstances, and was never universally shared (by Sephardim, for example).

More importantly, however, the entire notion of authenticity is a false projection of particular historical quirks onto an imagined ideal of ?realness? that artificially freezes culture, and thus spells its demise. The truth is that there is no single authentic Jewishness. Like any living culture, Jewish culture (and religion) evolves over time in order to remain vibrant. Of course, there are certain core values, myths and cultural traits that remain relatively constant. But bagels, bookishness and bar mitzvahs all evolved historically; none is more ?really Jewish? than sushi, sports or a Sweet 16.

Orthodox fidelity to the law, anxieties of dislocation, reformist rationalization ? all arose along the way. Even the ultra-Orthodox maxim that ?innovation is forbidden by Torah? is, of course, a 19th-century innovation. To imagine that cultural forms must remain static to be authentic is to doom a culture to obsolescence.

It is also, of course, to privilege some cultural forms over others. Why bagels and not jahnoon? Why Joseph Caro?s legalistic Shulchan Aruch but not his radical, mystical ?Maggid Mesharim?? And for that matter, why a white male rabbi over an African-American female one? Anytime we claim that one cultural form is more authentic than another, we are replicating privilege and marginalization.

And worst of all, by ossifying and reifying a fake authenticity as ?the real thing,? we actually undermine the attempt to create true authenticity on the part of progressive Jews. Meaningful authenticity isn?t about an old religious form or a Yiddish pun (please, enough with cutesy invocations of ?gelt? and ?schlep?). It?s when a religious, literary or cultural form ? old, new or alt-neu ? speaks to the depths of what it is to be human.

If a guitar-playing, meditating female rabbi resonates more with the souls of her followers than does a nigun-singing, Talmud-learning male one, she is the more authentic spiritual leader. If ecstatic prayer speaks to and from the spirit more than a supposedly consistent rationalism, then it, too, is more authentic, notwithstanding the howls of the secularist. Authenticity isn?t about form, it?s about getting to what matters.

For progressive Judaism to succeed, it must jettison the myth of authenticity based on some ?real? forms that some ?real? Jews really believe in and replace it with a personalized notion of authenticity measured by integrity and individual coherence. Is my Buddhist-Judaism less authentic than someone else?s more carefully patrolled boundaries of permissibility? Quite the contrary: It is more authentic, because it is more faithful to the truth of my experience. Not preference, not whim ? but carefully considered internal coherence.

Those who prefer traditional forms sometimes deride innovations as ?compromises?. Yet, which is the more objectionable compromise: bending the rules to eat hot food on nonkosher plates, or clinging to a ritual form that may no longer hold any meaning, is historical in its origin and may actively impede other ethical values (such as connecting with people of other faiths)?

Likewise, sometimes traditional forms are derided as intellectual compromises by those who insist on a more rigorous secularism. But which is the real compromise: admitting the irrational desire to pray, or maintaining some pseudo-intellectual purity that cuts off the heart despite the soul?

Progressive Jews don?t do what they do to compromise the authenticity of Judaism; they do it to maintain it. Sure, plenty of lazy Jews simply indulge their laziness, whether as ritual wafflers, ethical slobs or intellectual weaklings. But for those who care about living an authentic life, values shift because of consideration, not spinelessness. To say ?This works for me? can, indeed, be a summary denial of responsibility. But to say so meaningfully, based on discernment and introspection, is a mark of integrity.

The myth of authenticity, in contrast, is an abdication of introspection and personal responsibility. Thanks, but I?m not religious. Thanks, but I?m Orthodox. Thanks, but I don?t need to think any further. It?s a lot easier to say ?This is real Judaism, and I do/don?t practice it? than to look closely at what form might work to do the important stuff (afflict the comfortable, comfort the afflicted) for you.

Obviously, newer Jewish forms are not intrinsically superior to older ones; the books of the Bible have endured precisely because they continue to speak to so many people, despite the gulf in history and culture. And to be sure, the ancientness of these texts is part of their power: They bind us to history in a way that newer books cannot. But this power is not because of some imagined authenticity, or some unbroken connection between us and biblical Israelites who, after all, imagined that the world was a small, flat place, had no concept of medicine or industrialization, had notions about nation, ethnicity and gender that hopefully would have no place in contemporary society.

No, Biblical Israelites are not the real Jews. Neither are Hasidim, 20th-century modernists, neurotic New York psychoanalysts, Moroccan saints, angst-ridden intellectuals, High Reformers or anyone else. Real Jews are all of the above ? and the rest of us who take Jewishness seriously, in one form or another. Real Jews speak with Southern accents, keep one day of yomtov (the holiday), hike in the wilderness, eat shrimp, intermarry, become ba?alei teshuvah, do karate, are bisexual, are neoconservative. Real Jews are the ones who make Judaism real for themselves.

In the past few years, there?s been a fair amount of attention to novelty Jews. Yuri Foreman, for example, is both a rabbinical student and a boxing champion. What?! Matisyahu is a Hasid and a pop star. What?! The media love those interrobangs (the ?! symbol), but behind every one is an implicit assumption that Jews are supposed to be one way and not another. Boxing rabbis, lesbian rabbis, ?Adventure Rabbis? and yoga-teacher rabbis ? these images are foreign, funny or weird to some people, because the word ?rabbi? still conjures up a very particular image: usually male, nebbishy and bearded. (Not that there?s anything wrong with that ? I?m all three.)

But that image is just a form. Indeed, when I read about Jewish farmers, Jewish Sufis and Jewish pro wrestlers, I think, good for the Jews. I?m generally reluctant to praise one culture over another, but if there is one distinctive feature I love about Jewish culture, it?s how, in our many diasporas, we have amalgamated so many contradictions, oblique angles and diverse perspectives on how it is to be human. Granted, that pattern also leads to Jewish mobsters, Jewish financial shysters and Jewish arms merchants, but Jewish crooks aren?t bad because they?re inauthentic; they?re bad because they?re bad. The basic principles of change, growth and evolution are what has kept us going these thousands of years, as much as the basic bedrock values that remain more or less constant. For Jews, even more than for others, change is authenticity.

So let?s get used to slippery slopes, murky swamps and the many other geographies of blending and uncertainty. Whether or not Jews have traveled here before, they are where we live today. Finding authenticity without is ahistorical and self-defeating. Finding it within is holy.

The Myth of Authenticity