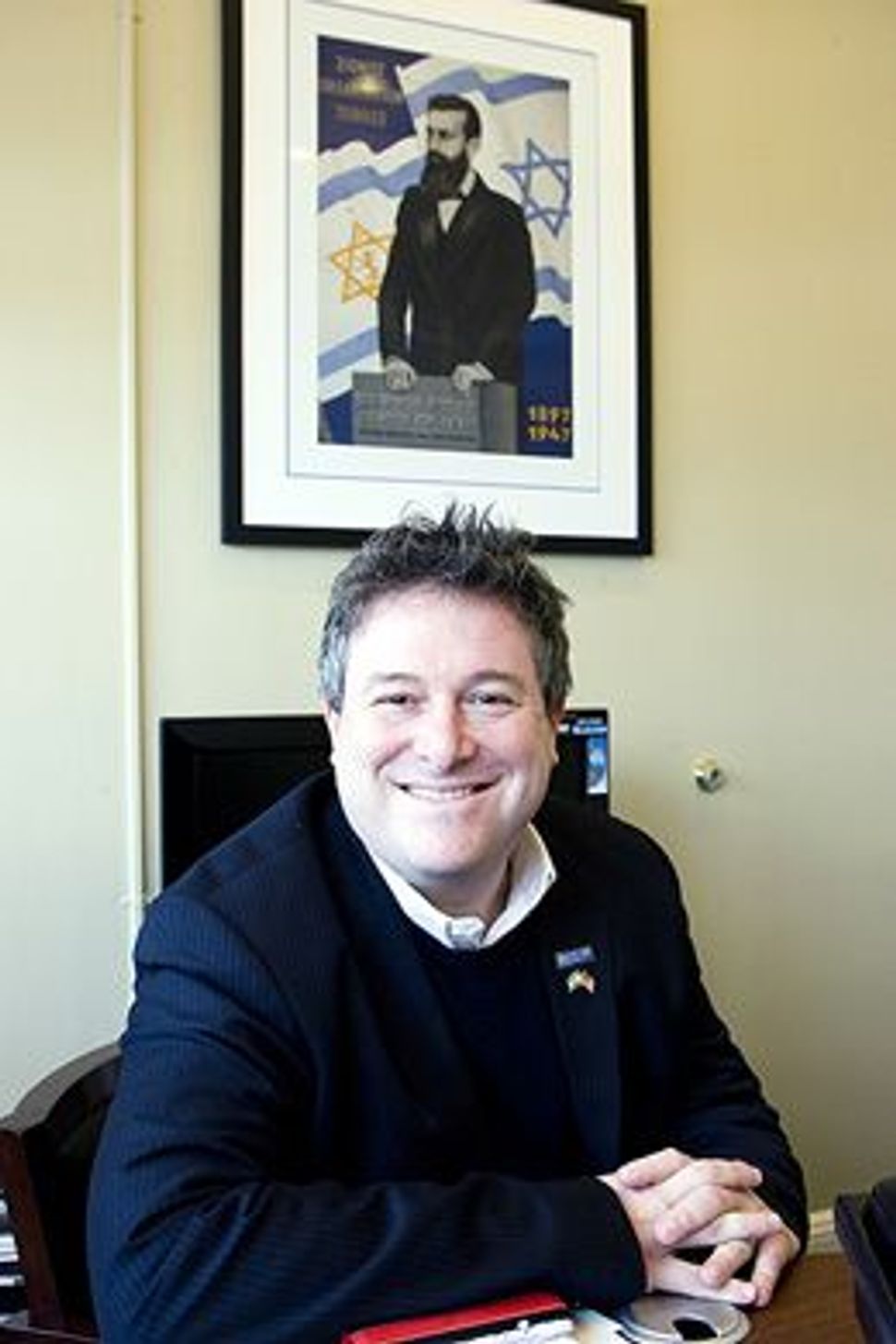 If You Will It?: Steven Goldstein in his New Jersey office, with a print of Theodor Herzl on the wall. Image by ARIEL JANKELOWITZ

Steven Goldstein jokes that his office in suburban New Jersey is “like the Jewish Museum of Montclair.” A sage-looking rabbi peers down from a lithograph on one wall, and a print of Theodor Herzl hangs from another. There are a Hebrew movie poster and a mezuza. 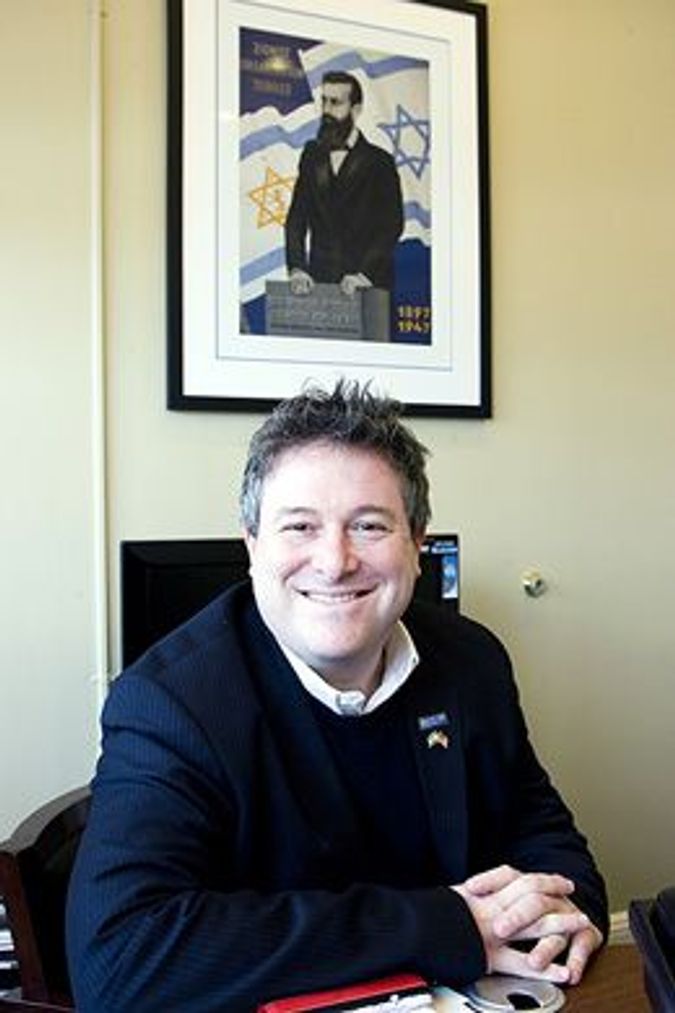 If You Will It?: Steven Goldstein in his New Jersey office, with a print of Theodor Herzl on the wall. Image by ARIEL JANKELOWITZ

Goldstein, however, doesn’t work for a Jewish organization; he is the founder, chair and CEO of Garden State Equality, the primary advocacy group now pushing for marriage for gay men and lesbians in New Jersey. At the moment, the organization is in the midst of an intense political race to pass a gay marriage bill before the current New Jersey governor, Democrat Jon Corzine, leaves office January 19, 2010; Corzine’s successor, Republican Chris Christie, has said that he will veto any such bill.

Thickset, with a knit yarmulke and mussed gray-black hair, Goldstein, 47, is proud to be gay, he said, but “Judaism is by far the essential part to my identity.” He enrolled in the Reconstructionist Rabbinical College in 2005, one year after founding Garden State Equality. But in 2006, he took a leave of absence from rabbinical school to take on the job of running Garden State Equality full time. He plans to go back to studying for the rabbinate in the fall of 2010.

Perhaps it’s appropriate, then, that Goldstein is flamboyant —flamboyantly Jewish, that is.

“How much do you love my tchotchke?” he said in a thick Queens accent, picking up from his desk a little statuette of a man praying at Jerusalem’s Western Wall, the Kotel. Turning at one point to the organization’s political director, a non-Jew, he shouted, in mock exasperation: “Oh, David Smith! Don’t be so treyf.” He put a serious look on his face and turned to a reporter. “Listen to me,” he said, contemplating the statuette. “Do you like my tchotchke?”

For Goldstein, politics and the rabbinate are third and fourth careers; he has also worked as a television reporter and producer, a communications consultant, and a lawyer. With a Bachelor of Arts from Brandeis University, a master’s degree in public policy from Harvard’s John F. Kennedy School of Government, a Master of Science from the Columbia University Graduate School of Journalism and a Juris Doctor from Columbia Law School, Goldstein jokes that he has “more degrees than a thermometer.”

The combination of his background in press, communications and the law has made Goldstein an expert public face for such a hot-button political issue: His spiel is so highly polished, it shines. He is disarmingly frank and charming, but even the most moving personal stories told during an interview turn out to be ones he has told, practically word for word, to other reporters. Goldstein and his staff of 40 are working furiously behind the scenes at the New Jersey State Legislature — but Goldstein won’t say which legislators they’re targeting or what they’re doing.

“The second I’ve said something even a little bit sensitive, the other side sends it to thousands of people on their mailing list and raises money off it,” he said. “Giving away strategic secrets is as close as a Google alert.”

On December 7, the Freedom of Religion and Equality in Civil Marriage Act passed the state’s Senate Judiciary Committee by a 7-6 vote. But sponsors Loretta Weinberg and Ray Lesniak, fearing that the bill didn’t have enough votes to pass the full Senate, asked the Senate president to delay a full vote until the Assembly — widely understood to be more strongly supportive of gay marriage — considers the bill. “We feel momentum is building,” Weinberg told the Forward, “and if we have more time, that would help.”

A Rutgers-Eagleton Poll released last November found that adults in New Jersey support legalizing same-sex marriage by a slim 46% to 42% margin. Still, the poll found that even those opposed to gay marriage would, by a large majority, accept the legislature’s decision if the bill were to pass. “For most New Jerseyans, this isn’t even a terribly important issue,” said Rutgers political science professor David Redlawsk, who directs the center that conducted the poll. “The people who say it’s more important are actually the ones in support.”

Before Goldstein founded Garden State, he was living in Brooklyn with his partner, Daniel Gross, and running a communications firm. In 2002, Lambda Legal, the national GLBT legal organization, hired him to help build public support for same-sex marriage in New Jersey. (Lambda was the lead counsel in Lewis v. Harris, the then-pending state lawsuit that ultimately led, in 2006, to civil unions.)

“I got so engrossed in this battle that when I worked for Lambda, I wound up firing every other client just to focus on Lambda’s battle for marriage equality,” Goldstein said. “I became so intense, it just became my full-time job. De facto. I dropped everything else.”

The couple moved to New Jersey that same year.

Garden State Equality now claims 64,000 members. It has four offices across the state and 10 paid permanent staff members. Goldstein, however, receives no salary.

“My partner does well,” he said, with a hint of pride. “He was a vice president at Goldman Sachs and then formed his own company. I made money. We’re comfortable enough.”

Goldstein was raised in a “typical secular suburban American family” that attended synagogue on the High Holy Days and held a Passover Seder but was, he said, largely nonobservant. But Goldstein said he has had “a love affair with Judaism my entire life.” He and Gross keep a kosher home, and Goldstein “almost never works on Shabbat,” though he does drive to synagogue. He and Gross were married by a rabbi under a hupah. His political work and his religious life, Goldstein says, are closely linked. “Judaism always resonated as a faith that wanted to have an impact on the world,” he said. “That Israel — not just the country, but the people —could be a light unto the nations? Oh my God, this was just, if I may use this word, the sexiest thing I ever heard in my life.”

So, he says, enrolling in the RRC, which endorsed gay and lesbian rabbinic ordination years ago, was the fulfillment of a “lifelong dream.”

“When I do this work at Garden State Equality, the excitement I feel is hard to describe. But when I was studying to be a rabbi, the serenity I got was unbelievable,” he said.

Goldstein tends to speak in superlatives, and his obvious passion and outsized presence impress even his political foes. “One thing about Steven,” Len Deo, president of the anti-gay marriage New Jersey Family Policy Council, said with a laugh, “He constantly interrupts me when we’re debating on TV. It’s hard to get my point in.”

Goldstein concedes the point: “On my tombstone, if it were to say, ‘loud, gay, New York-New Jersey Jew who made a difference,’ I’m okay with that.”