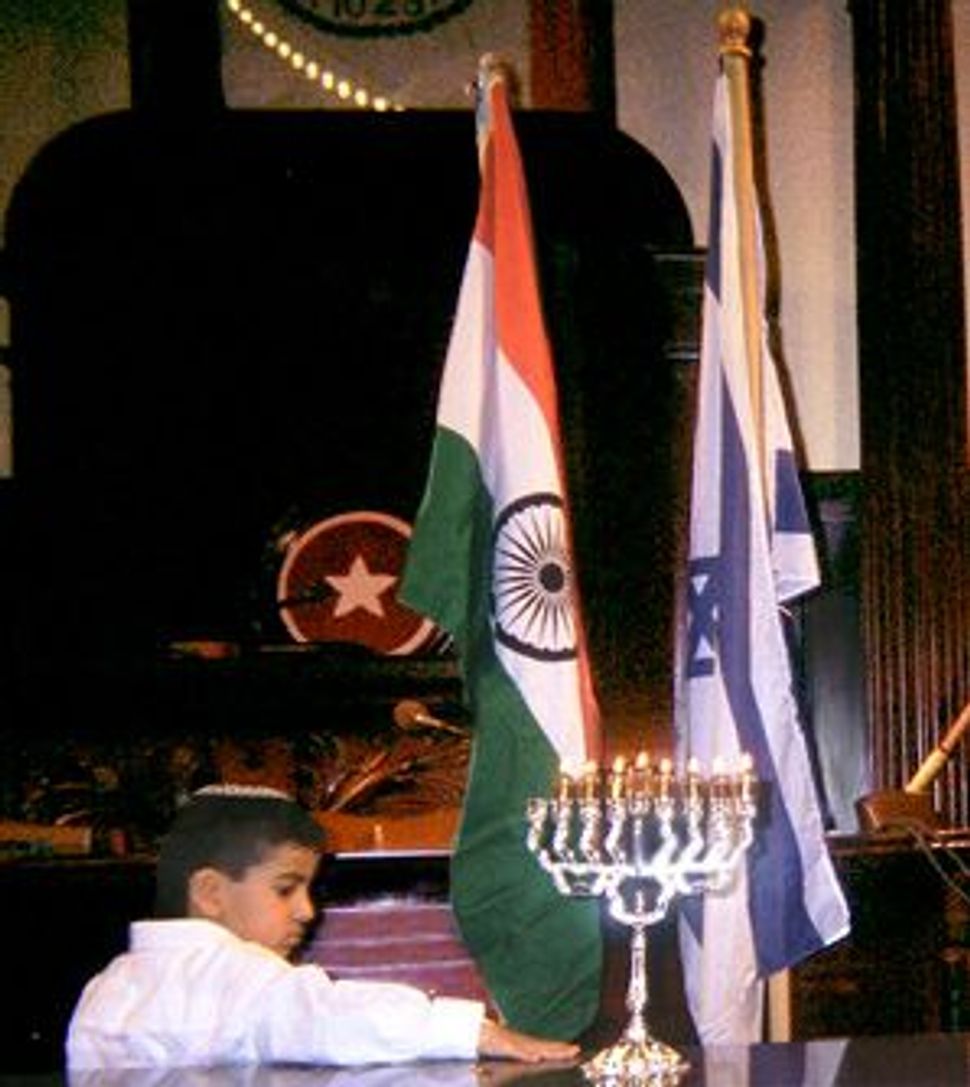 FROM BOMBAY TO JERUSALEM: The consuls general of India and Israel were scheduled to attend a Hanukkah party being thrown by the tristate area's small Indian Jewish community

Next week, at New York’s Indian consulate, a group of Indian Jews will attempt to bridge the gap between their culture and that of most American Jews — by throwing a Hanukkah party. 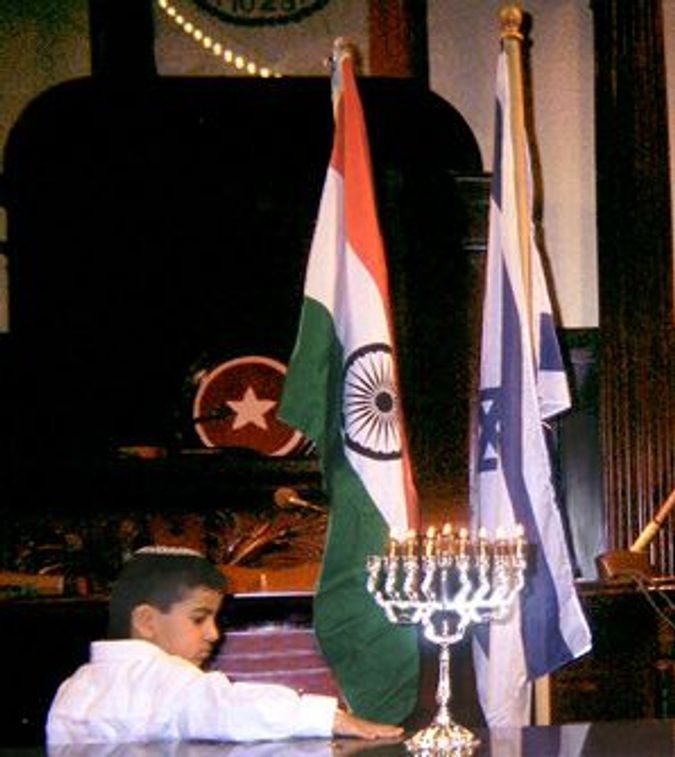 FROM BOMBAY TO JERUSALEM: The consuls general of India and Israel were scheduled to attend a Hanukkah party being thrown by the tristate area's small Indian Jewish community

The decision may seem obvious, but Hanukkah is actually a relatively new addition to the Indian Jewish tradition, which developed separately from those of Ashkenazic and Sephardic Jews. Although lore claims that Jews have lived in India since the time of Antiochus, the villain of the Hanukkah story, Indian Jews started celebrating the holiday only about 200 years ago.

Every immigrant community in this city of immigrants must negotiate competing desires to remain unique and to assimilate. But while Russian, Bukharian and Middle Eastern Jewish communities are substantial enough to be visible within the larger Jewish landscape, New York’s tiny Indian Jewish community has gone largely unnoticed.

“People have been here 30, 40 years, but the community is virtually unknown,” said Romiel Daniel, president of an organization called the Indian Jewish Congregation of USA. “The Russians got tremendous support [from the American Jewish establishment]; as far as our community was concerned, no.”

Since 1995, the Indian Jewish Congregation has been renting out the Village Temple in Manhattan’s Greenwich Village on major holidays. The congregation’s High Holy Day services, which are free and open to the public, have drawn people from outside the community, including Ethiopian, Russian and Bukharian Jews.

“We want to be part of the larger community,” Daniel said. “We don’t want to assimilate, we want to integrate.”

Part of the upcoming Hanukkah party’s significance is that it reaffirms the growing partnership between India and Israel, both of whose New York consuls general will be in attendance. Today, India is the second-largest importer of Israeli goods.

That situation is not far off from the one that brought Jews to India in the first place, according to one version of the story.

“Three ships left from Palestine. They were trading with India,” said Moses Samson, a friend of Daniel’s who, like Daniel, made his way to Queens from Bombay.
“There was a typhoon, and one ship went down in the sea, one was swept to Cochin and one landed on the coast of Maharashtra” near Bombay.

The legend ends with the birth of two communities: a larger one in and around Bombay, known as Bene Israel, and a smaller one in the city of Cochin.

Shipwreck or no shipwreck, the Bene Israel and Cochin communities date back more than 2,000 years. Much later, in the 19th century, a wave of Jewish traders and refugees from the Middle East settled in eastern India. This group became known as the Baghdadis. The combined Jewish population of India numbered about 37,000 at its peak.

Today, the Jewish population that remains in India has shrunk to about 5,000. Many Bene Israel and Cochin Jews have immigrated to Israel, and the Baghdadis have relocated to British Commonwealth countries.

And then there is the community of mostly Bene Israel Jews in the United States, which is concentrated in the New York area and numbers about 350. “My husband and myself are second cousins. My son and his wife also were second cousins,” said Noreen Daniel, who is married to Romiel. “Our community is small.”

The Daniels left Bombay in the early 1990s and spent three years in Madagascar and Mauritius before settling in New York. Their living room contains a mix of Indian and Jewish decorations — a clock set to Bombay time, a replica of Chagall’s stained-glass windows and an Indian menorah with holders for small cups of oil instead of candles.

Indian Jewish émigrés, who left the old country primarily for economic reasons, were not greeted warmly, either in Israel or in the United States, Daniel said. In 1962, Israel’s chief rabbi questioned their “purity” as Jews and demanded that they be converted under Ashkenazic supervision. (Legend has it that he failed after David Ben-Gurion himself intervened.)

In the United States, they seem to have simply slipped beneath the radar.

“Part of the reason we wanted to [hold the Hanukkah party] in the consulate is that we wanted to increase awareness… of the fact that there are Jewish populations of different ethnicities who are here in this country,” Daniel said.

The evening may be an opportunity for integration, but Daniel promised that the Hanukkah rituals — reciting Psalm 30, an unusual benediction for the holiday, in a unique kind of chant, and eating fried Indian snacks — will “make you feel like you’re back home in Bombay.”

“If we changed the services, we’d get killed,” he said with a laugh.