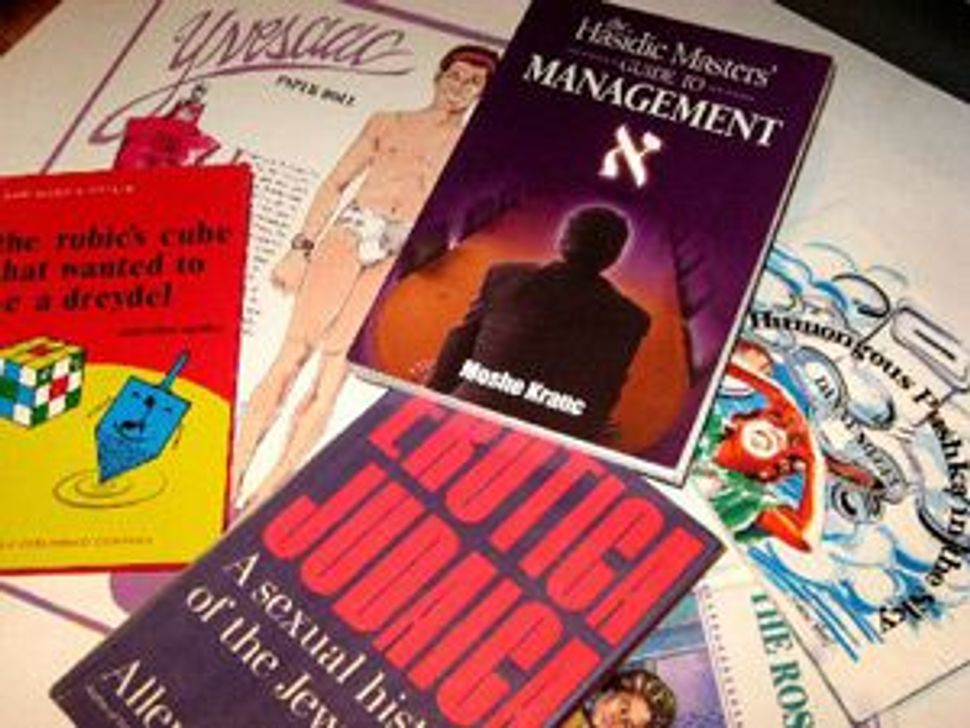 Jews are the People of the Book, but it has to be the right book: inspiring, life defining, readable on a plane. Sometimes it’s not even the book everybody else is reading. 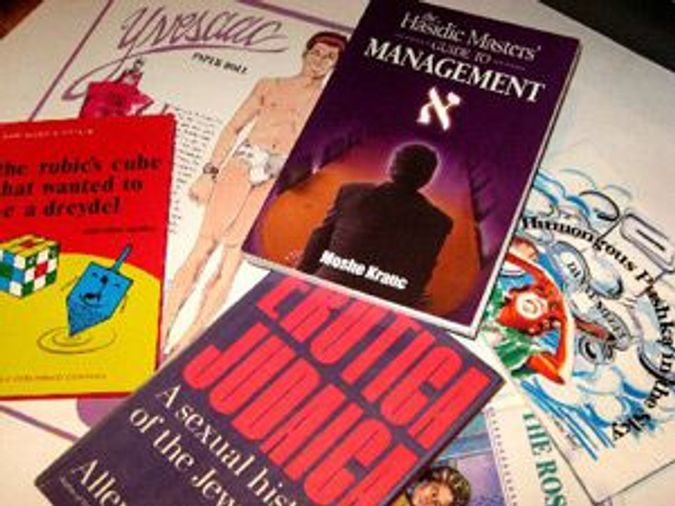 What about the not-so-best-sellers? Books that have odd titles, quirky subjects, outrageous premises? According to R.R. Bowker’s Books In Print database, there are about 17,000 titles on religion published in America each year. Out of this number, there are often thousands of Jewish titles, each trying to answer the eternal question: What will interest a Jewish reader?

For several years, I have been collecting overlooked Jewish titles — righteous remainders, I call them. I search for them on bookstore-sale tables, at synagogue and library book sales, and on used-book sites. I love them all — a harmless form of bibliophilia — down to their magic clunkiness, perfectly weird titles and unpredictable forays into Jewish life. They succeed where most books fail: They make me think and smile.

Did someone give you an unwanted or still unread best-seller for the holidays? What if you returned it and used the dough to go off-list, to get yourself not only a heart of wisdom but a head of wonder, as well. Here are some recommendations:

A title like “The Paper Shtetl: A Complete Model of an East European Jewish Town” (Schocken Books, 1984) by David Grupper and David G. Klein gets you started. Filled with wonderfully illustrated models to cut out, the book gets you building your own paper shtetl. Just cut and tape, and you are back in 19th-century Eastern Europe — albeit a smaller version. ($6 and up)

Jewish book parodies — in this case, of James Bond novels — with titles from the 1960s, like Sol Weinstein’s “Loxfinger: A Thrilling Adventure of Hebrew Secret Agent Oy-Oy-7,” (Pocket Books) can certainly put you on the right path, too. ($15 and up)

Other titles, like “The Hasidic Masters’ Guide to Management” (Devora Publishing, 2004), take Jewish wisdom into uncharted territories. Author Moshe Kranc finds unexpected connections between rabbinic tales and corporate values. In a chapter on avoiding false assumptions when negotiating, he sagely concludes, “Know what your negotiating partner values — onions or gold.” ($2 and up)

Others titles lure with a whiff of the forbidden:

“Erotica Judaica: A Sexual History of the Jews” by Allen Edwardes (Julian Press, 1967) was first passed to me on the down low in college. With chapters like “The Ark and the Uncircumcised” and “Sexual Hospitality,” it was my secret find. Thoroughly researched and footnoted, the book will lead you to discover the divine lingam and what really happened at Sinai as the Children of Israel awaited Moses’s return. ($13 and up)

More rarity than remainder is “The Horse Is Dead” (Random House, 1968), a “tasteless novel” by Robert Klane (writer of “Where’s Poppa?” and “Weekend at Bernie’s”). It’s the story of pathetic Nemiroff, a self-hating Jewish summer-camp counselor who falls for the very gentile and gorgeous Miss Booe, the camp’s swimming instructor. The catch: She won’t seal the deal until he has a bar mitzvah. ($100 and up)

Kids, too, can climb off the best-seller lists. Come closer, mayne kinder, and I will tell you the story of “The Rubic’s Cube That Wanted To Be a Dreydel and Other Stories” (Ridgefield Publishing Company,1984) by Rabbi Allen S. Maller. It’s a collection of oddly charming short stories about change, including “The Dog That Became a Bar Mitzvah” and “Oh, God! A Religious Computer.” ($4 and up)

Not to be out-metaphored is author and poet Danny Siegel, with his brilliant little 1993 soft-cover book about tzedakah visions, “The Humongous Pushke in the Sky” (Town House Press). Filled with images of those in need imagined in clouds and stars, it could have been called “Lucy in the Sky With Mitzvahs.” ($18 and up)

In an even odder youngster’s book nook, we have, “The Rosenbergs (History’s Mysteries).” Come on — a children’s book on the trial and execution of Julius and Ethel Rosenberg? In the 1992 book, published by Crestwood House, author Anita Larsen weighs the evidence, recounts the appeals and describes the events leading up to the execution. Guilty or innocent? Provocatively, the book asks, “How would you solve the case?” ($1 and up)

Classical Yiddish author Mendele Mocher Seforim, in “The Travels and Adventures of Benjamin the Third,” (Schocken Paperbacks) created a kind of Jewish picaresque novel, introducing the idea of Jews on the road. A 1996 nonfiction work, “A Traveler’s Guide to Pioneer Jewish Cemeteries of the California Gold Rush” (Judah L. Magnes Museum) by Susan Morris, puts you in your own travel book by supplying maps, bios and commentary on those interred in Northern California’s Gold Rush towns. ($13 and up)

Your search and travels may cease, though, with a book by an author well known to you from fashion and TV: “Isaac Mizrahi Presents the Adventures of Sandee the Supermodel” (Simon & Schuster, 1997). Published in three parts as an oversized fashion comic book, it’s the story of Isaac’s (Yvesaac’s) discovery of a new modeling talent. On the back cover, it even features a very trim Yvesaac paper doll, complete with cut-out leopard swim trunks, tote bag and incognito sunglasses. ($9 and up)

Fellow readers, keep searching off-list. More gems are out there, waiting to be rediscovered. The definitive collection of “Righteous Remainders” has yet to be published, or maybe it has and I just haven’t seen it on sale.

All these books are available at http://used.addall.com

Edmon Rodman is a freelance writer living in Los Angeles. He has made his own forays into remainderdom with “Snack Pack Books”(Little, Brown and Company, 1995), and “Let’s Dig-a-Dinosaur” (Andrews McMeel, 1995).