For American Teens, Lessons in Hebrew Immersion and Settler Ideology 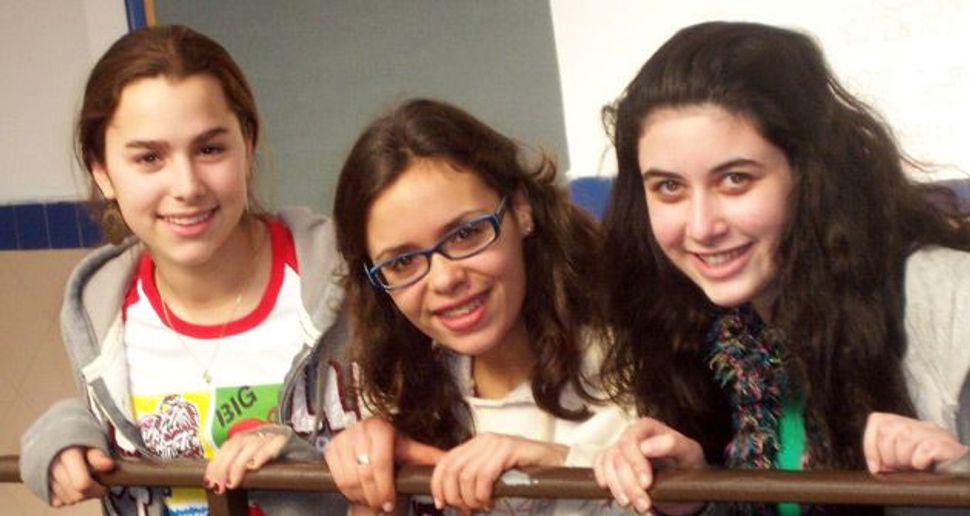 For participants in the Yeshiva University schools’ newest exchange program, the last month has been one of slumber parties, shopping trips, Hebrew-language immersion and settler ideology.

The Wang school now has 10 of its 15- and 16-year-old girls attending Ulpanat Tzvia, where they study Hebrew and live in dormitories alongside their Israeli peers at the school’s campus in the West Bank community of Ma’ale Adumim — 4.5 miles outside of Jerusalem.

“Judea and Samaria is number one on our list of priorities,” Shoshana Frankel, an English teacher who runs the exchange program at Ulpanat Tzvia, said, referring to the West Bank by its Hebrew names. “Eretz Yisrael Hashleima [the Whole Land of Israel ideology] is very much our policy here and we don’t keep any secrets about it.”

The Y.U.-affiliated high school chose Ulpanat Tzvia because it was a “good match” educationally, religiously and philosophically, according to Tova Rosenberg, who coordinates the Israel exchange programs for Y.U.’s girls and boys high schools.

“All the other programs are American school students coming with American staff to a school where everything was set up just for the American students.”

Since settler ideology is what Frankel calls “the underlying principle of the school,” the visiting American students attend meetings organized by Ariel — the right-wing breakaway from the mainstream religious Zionist youth movement Bnei Akiva.

Ulpanat Tzvia, with its well-regarded academics and its comfortable boarding facilities, is popular with settlers from across the West Bank. “The girls that they are interacting with come from Beit El and come from Givat Hadasha and all these places and that’s considered fine and they haven’t been told they are not allowed to be in contact with them,” said Frankel.

Last year, Yeshiva University High School for Boys/Marsha Stern Talmudical Academy established a similar program, also based in the settlements. As the girls arrived in December, so did 10 boys, also age 15 and 16, headed for the Kfar Etzion in the Etzion settlement bloc. There, the boys study for six weeks at the local Yeshivat Mekor Haim.

Students who wished to participate in the West Bank programs had to receive permission from their parents, and write an essay discussing why the exchange appealed to them.

For the girls at Ulpanat Tzvia, much of the exchange has been a common story of teenagers from different continents getting together, sharing life experiences and becoming fast and firm friends. “When we first got to the school and got out of the bus all of a sudden everyone was singing and dancing and we didn’t know any of them yet we felt so connected,” said Yolly Dratch, 15, of West Hempstead, N.Y. Her friend, Rachel Mirsky, 15, of White Plains, N.Y., commented: “The second day I already felt like I was here two weeks.”

Another major part of the equation is academics. Yolly and Rachel said that while classes have been difficult, their Hebrew lessons back home prepared them to participate fully, and it has felt special studying the same Jewish texts they work on at home in such a different setting.

But it was not long into the visit before politics came into the picture. The group arrived on December 6, and on December 9 classes finished early so that any member of the student body who wanted could get to Jerusalem in time to take part in a large demonstration against the freeze on buildings in the settlements.

By this time, some of the American girls already had strong feelings on the issue, which they made known in classroom discussions. “One girl was saying that she felt that we shouldn’t go and protest because she felt that would be a chilul hashem [desecration of God’s name],” said Rivka Cohen, 15, of West Hempstead, N.Y. “But I disagreed — I think that it would be a chilul hashem if we didn’t go and protest.”

Rivka and friends said they did not go to the demonstration because, due to the terms of the exchange, the visiting students are less free to travel the country on their own than are the Israeli students.

But the American students were all alone in the 150-student capacity dorms that night — and many were at the demonstration in spirit. “I feel that we should protest and that we should be able to keep building,” Rachel said.

Yolly said that the political initiation has been eye-opening: “Back in America I never knew what they were talking about. Now I see all these places and now I understand — oh, to give away this place or that, now I understand how it will affect Israel.”

The next stage of the program will begin in January, when the New York students return home and shortly afterward four girls from the West Bank school head out to join them.

In fact the school, like the Mekor Haim yeshiva, which also sends pupils to the States, has a blanket ban on overseas school trips, as it abides by a religious-Zionist view that it is prohibited, under normal circumstances, to leave the Land of Israel. But both West Bank institutions are making exceptions for this visit.

“Rabbi Eitan Eiseman, the head of the Tzvia-Noam school network, of which Ulpanat Tzvia and Yeshivat Mekor Haim are members, has said time and time again that for halachic reasons we should not allow our students to leave Israel,” Rachel Kaplan, principal of Ulpanat Tzvia, told the Forward. “But an exception was made for the exchange program with the Yeshiva University high schools because the students are leaving Israel as shlichim [emissaries] of the Jewish people, with the goal of enhancing the lives of their American counterparts with Israeli culture and the Israeli experience.”

For American Teens, Lessons in Hebrew Immersion and Settler Ideology