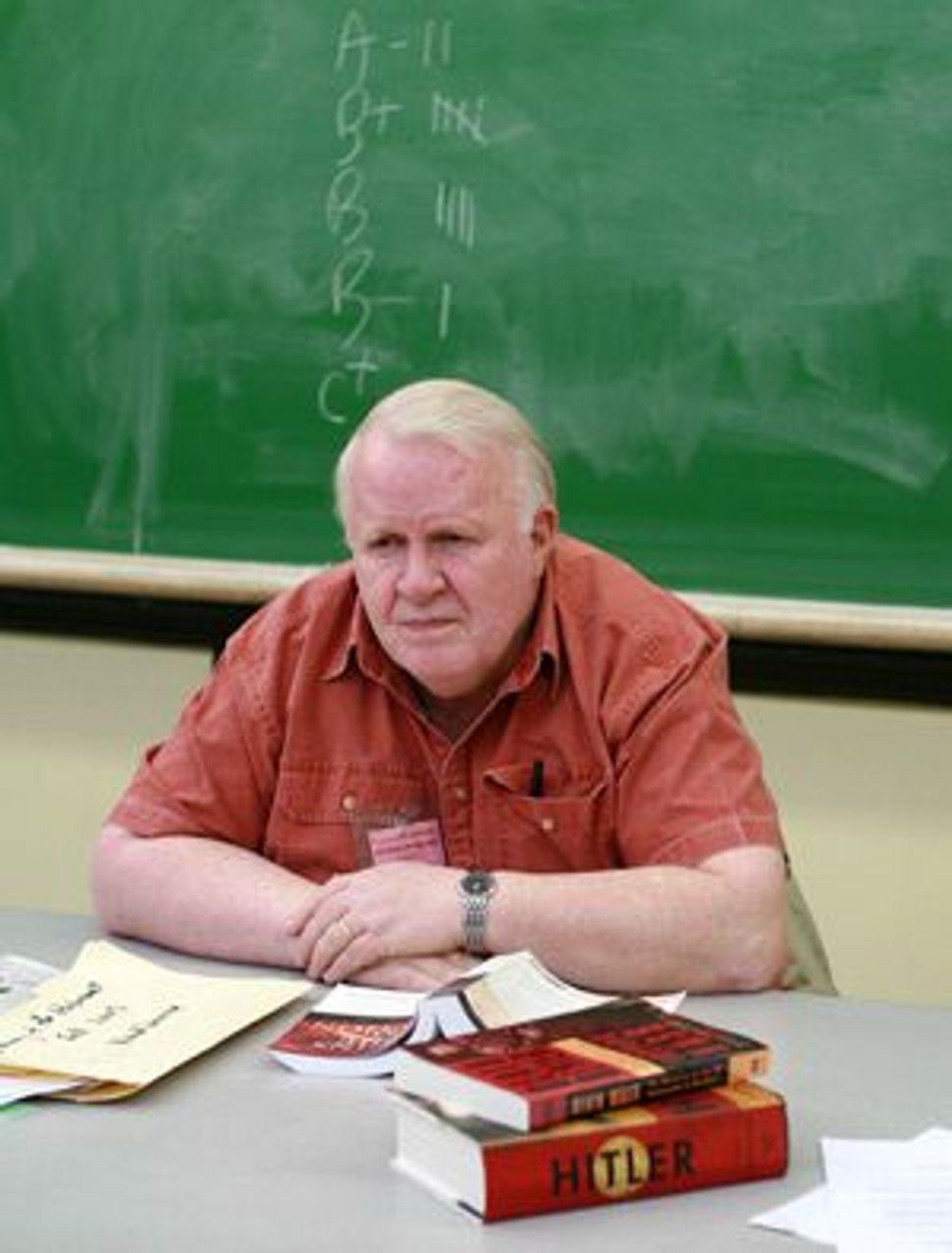 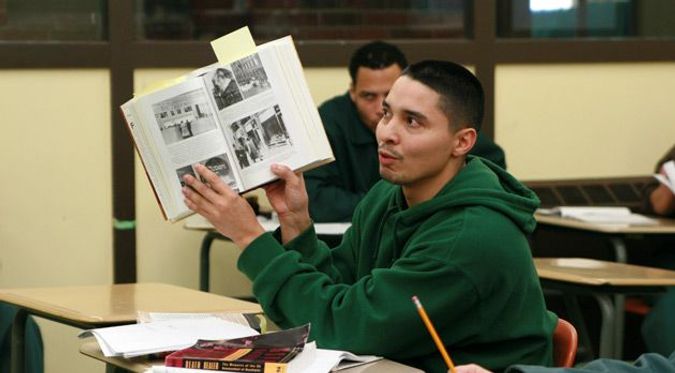 Making a Point: Jeffery Rivera, a prisoner enrolled in the Bard Prison Initiative, discusses the Holocaust in a course offered at the Woodbourne Correctional Facility. Image by Lexi Adams

It’s a Friday afternoon in December, and history professor John Fout is leading the students in his course, “Nazi Germany and the Holocaust,” in a spirited discussion.

Every time he has taught this class, Fout says from behind his desk in Room 7, students always ask: “If the Germans were losing the war, why didn’t they use the Jews to help them? If you can answer that question, you can answer the question of Nazi Germany.” He pauses and looks around. “And what’s the answer?”

Eleven students, who are seated in rows of desks with their copies of Christopher Browning’s “The Origins of the Final Solution” propped open, begin throwing out ideas all at once.

“I think it’s the same reason why the United States doesn’t use prisoners,” Antoine Sims replies from the back row. “Because a prisoner is considered an enemy of the state.”

Hands shoot up into the air. Samuel Chung turns from his desk in the front of the classroom to face Sims. “But we’re here because of a crime,” Chung says. “What did they do?”

Sims, Chung and their classmates are students of the Bard Prison Initiative, an unusual program that sends professors into New York State prisons to teach a full slate of Bard College classes. There are 70 students working toward associate’s or bachelor’s degrees here at the Woodbourne Correctional Facility, 100 miles north of New York City.

Woodbourne, a medium-security facility, is one of two “main campuses” of the program; the other is the maximum-security Eastern New York Correctional Facility, just a few miles down the road. Several other prisons serve as “satellite campuses” where students can begin working toward their degrees and then transfer here to graduate.

The students in Fout’s class, History 201, read all the same books that Fout assigns to his students on campus, including a memoir by an SS commandant and a biography of Hitler that clocks in at more than 1,000 pages. “They just respond remarkably well,” Fout said of his students. “I just find the quality of the minds and the work of these students is as good as you could get, for teaching. A lot of days where I’ve had a really good class, I’m thinking to myself: How in the hell did these guys end up there when they’re that smart and that able to understand such complex material?” 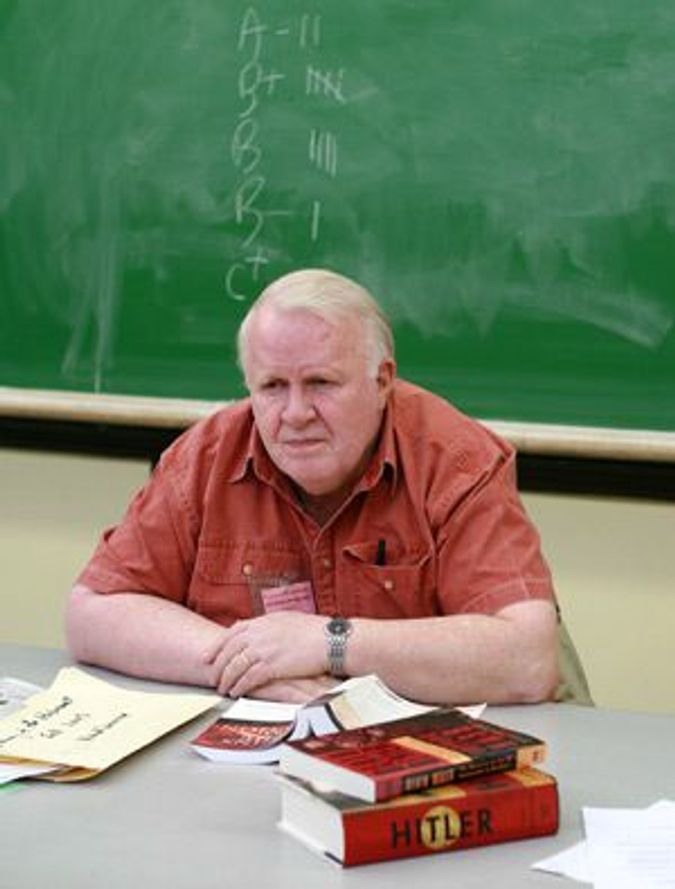 The Bard prison program prides itself on its highly competitive admissions process. Executive Director Max Kenner, the program’s founder, said that each year, between 80 and 120 inmates apply for the 15 slots per campus. They are admitted on the basis of an analytical essay that they write in response to a piece of literature and how well they do in an interview.

“My first semester, I was leery,” said Fout, 72, an emeritus professor and European history scholar who retired from full-time teaching seven years ago; this is his third semester with the program. “I thought: What’s going to be the quality of the work? Will it be up to the standards of regular Bard undergraduate students? And what surprised me, and delighted me, was that, in a way, they’re better.”

Whereas typical college students have a full slate of classes and activities, not to mention active social lives, the students in this program have a lot of time and energy to focus on their classes, and are highly motivated to learn. “I was always disappointed by students who you wanted to make that extra effort for the final, and who don’t,” Fout said. “These guys, they do it! They reach for the next level of achievement, or level of sophistication, or level of understanding of the material. They just respond so great to encouragement.”

Since Congress eliminated Pell Grants for prisoners in 1994, access to higher education in prison has been extremely limited. Some prisons offer community college degree programs to students who can pay out of pocket — often a big hurdle, because the jobs available to people in prison typically pay less than 25 cents an hour. Bard’s program is one of only a few that are privately funded; its entire $1.2 million operating budget is privately raised, and covers everything from tuition to books to computers. (In 2009, the Bard program provided seed money to Wesleyan University to start a similar program in Connecticut.) Studio arts and lab sciences are limited because of logistical hurdles, but otherwise, students choose from the same breadth of math, science, social science and humanities classes as do the students on Bard College’s bucolic campus in Hudson Valley, N.Y. When they are finished, the students in prison graduate with diplomas “identical to diplomas we give on campus,” Kenner said.

In today’s class, the men have been debating exactly when the Holocaust began; students mention various pieces of legislation and milestones in World War II, until the discussion turns to the Nazis’ disastrous invasion of the Soviet Union, which many see as the turning point in Germany’s fortunes.

“I can’t be inclined to think that they would use Jews to help them,” Ray Brito said, “because they want to exterminate them.”

“They saw Jews as being the end of Germany,” Brito responded. “Himmler himself said that we have to destroy the Jews or they will destroy us.”

“Exactly,” Fout said again. “The war in the Soviet Union is a racial war.”

Moises Barrera raises his hand to add, almost as if to himself, “Why would the ‘master race’ use the lowly Jews?”

Barrera has closely cropped hair, wire-rimmed glasses and a thoughtful demeanor. Originally from Queens, he is serving 15 years to life; he is one of seven students in the room convicted of second-degree murder. Barrera applied to the program twice before winning admission in 2005; he completed his associate’s degree and is working toward his bachelor’s. “For me,” he said later, attending the program “was about not being a hypocrite.”

Barrera is very close with his nieces and nephews, and one nephew in particular had not been doing well in school. Whenever Barrera would push him to work harder, his nephew would respond that his uncle hadn’t done too well, either. And it was true: Before being sent to prison 17 years ago, at age 19, Barrera hadn’t finished high school. He had to complete his GED at Woodbourne before he could apply to the program. “I didn’t want him to follow in my footsteps,” Barrera said. “It was showing him with actions.”

Barrera’s thoughtful reflection on the subject is not unique. The men in this room, all wearing variations on the state-issued green khaki uniform (they call it “state greens”), have a remarkable ability to think critically about the choices they’ve made in their lives. In part, they credit their age and their maturity — many of them, like Barrera, came in as teenagers and are now in their 30s — and in part, they credit college.

“I no longer look at myself the same way I did before coming to Bard,” said John Leone, a beefy man from Brooklyn with dark hair and blue eyes. By far the most outspoken and enthusiastic member of the class, Leone reads additional books beyond the hundreds of pages that Fout assigns, and came to class today with relevant newspaper clippings and poems to share with Fout. “When you’re forced to look at literature — you’re forced to go in there and inspect things that you can’t see on the surface — it forces you to develop a mind that thinks critically,” he said.

Leone, 43, was sent to prison nine years ago on attempted burglary charges. “I used to think: I stole some stuff. Nobody’s home, it’s not a big deal,’” he said. “When I developed a critical mind, I couldn’t look at things like that no more. I realized, it has wide and far-reaching consequences. I might be taking somebody’s property, but I’m also taking — I invaded their space. They feel robbed, they feel vulnerable.” College, he said, “changes the way you view the world, and yourself in that.”