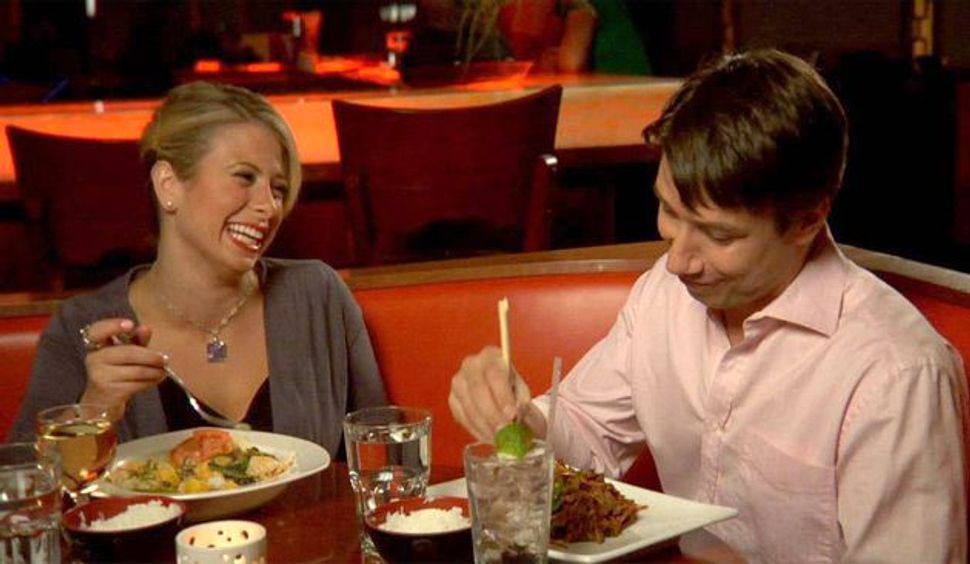 First Impressions: ?Sarah? and ?Daniel? meet for first time on Shalom TV?s faux depiction of the dating life. Image by SELF CONSCIOUS ENTERTAINMENT

When you think about it, the brave new world of online Jewish dating is the perfect setting for a reality show. Between the anxious chatter of the first meeting to the nervous wait for a post-date phone call (which, if it comes, only does after the requisite three-day delay), the lives of single Jews seem ready-made for a genre that thrives on the drama of everyday lives.

But it’s only now that television viewers are getting their first online Jewish daters: Justin, Brett, Daniel and Sarah.

The show is called “From Date to Mate,” and it’s not exactly reality. In the spirit of television programs like “The Office,” it’s faux reality — made to look like a reality show but in fact largely scripted with actors portraying fictional characters. But a growing group of fans say it’s doing something that hasn’t been done before, capturing the world of the desperately seeking 20-something New York Jew with vivid storylines, strong characters and impressive production values.

But most shocking perhaps to viewers of the show is that “From Date to Mate” is produced by Shalom TV. This is the first attempt at a scripted product by a channel that calls itself — proudly — the “Jewish C-SPAN,” focused mostly on public affairs programming and on broadcasting such events as the American Israel Public Affairs Committee’s annual conference and the yearly General Assembly of local Jewish community federations.

“Honestly, I thought this would suck, but shockingly enough, the first episode had awesome camera work, real production values, engaging characters and a script that left me cringing in sympathy for two of the characters,” wrote David Abitbol, founder of the popular blog Jewlicious. “This has definitely raised the bar for online Jewish content. A lot. I am still bewildered at how something this good ever got made.”

The show, which has aired two episodes so far, follows four singles in Manhattan as they date each other and search for a Jewish mate. It is sponsored by JMatch, but according to Shalom TV’s president and CEO, Mark Golub, the online Jewish-dating Web site was not given any creative control over the show’s content.

In fact, “From Date to Mate” — in addition to having plenty of cheesy moments and sitcomlike cliffhangers — makes a point of giving the characters Jewish identities that are complex and, in some cases, not a dominant part of their lives. When we meet Justin, he is nursing the breakup of a long-term relationship with a WASPy girlfriend named Paige, and admits that he joined JMatch only to please his mother. None of the characters says that he or she feels absolutely committed to marrying another Jew.

“This is not an attempt to do Orthodox dating in New York; these are your average Jewish young people. They have something of a Jewish identity,” Golub said. “There is always a Jewish component, but it can’t be in people’s faces.” 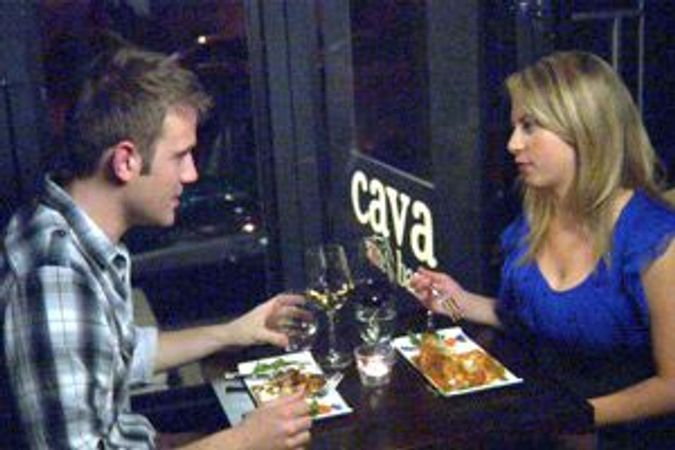 But, for all its reality, Golub does have at least one red line that he laid down when the idea for the show was presented to him by Sloan Copeland, the 31-year old senior editor at Shalom TV who conceived of the show.

“I only asked that no matter where the script went that it did not advocate intermarriage in the end,” said Golub. “I am not about to suggest on Shalom TV that it doesn’t matter in the end whether a Jew marries a non-Jew or not.”

Copeland, who previously wrote and directed a feature-length film, accepted the challenge. Working on what he called a “micro-budget” with an experienced director of photography, he gave the show a look similar to MTV’s “The Hills,” complete with interludes of time-lapse photography of New York, and a pop-song score — something very different from Shalom TV’s usual fare.

“If you do a straight reality show, you’re taking a chance; you don’t know how interesting it’s going to be,” Copeland said, explaining the reason that he went with a scripted format. “Plus, I wanted to differentiate ourselves from anything that was out there, create a truly 21st-century dating show.”

There are only a few indications that a Jewish television channel produces this show. On one of the first dates, between Sarah and Daniel, the topics of discussion include Birthright, Israel, and the Holocaust. This is Sarah on Israel: “Isn’t it cool that even though we’re not Israeli, when you’re there you just feel this emotional connection to your heritage and your ancestors and stuff like that?”

Another curiosity of the first two episodes is that the character of Justin — the one pining for his shiksa ex — has what clearly looks like a one-night stand with a non-Jewish woman he meets in a bar, while the dates with the Jewish girls all end with chaste kisses.

“I know what it’s like to be single and looking and frustrated,” she said. “I think that I’ve always kept my head up a little higher than Brett is keeping her head up now. She is a little bit more cynical than I am about the dating game.”

Piervicenti is not Jewish, but she said she has many Jewish friends who have told her that she mirrored their own struggles of trying to find love through online Jewish dating sites.

“I know quite a bit about the Jewish faith, and I certainly respect it,” she said. “I’m very flattered that I’ve been able to pass as a Jewish girl.”

One of the signs that singles might be identifying with the show is that all four of the characters have fictional Facebook profiles and have picked up hundreds of friends. Piervicenti’s Brett has 425.

Golub won’t reveal how many people have seen the show on demand or online — the only way to view Shalom TV’s content — but he says it’s significant, and that “From Date to Mate” has consistently been one of his most popular shows.

A new episode will be posted every month for the next eight months. And to judge from the comments on Jewish Web sites, an expectant fan base is growing.

“I am totally falling in love with this show! It’s funny, smart, and real… even though I know it’s scripted — credit to the writer(s)!” wrote an online commenter at Jewlicious.com who goes by the name Mic. “I’m so surprised that no one seems to know about this show, and that it’s not on a major network (I had never heard of Shalom TV before). Is there any marketing for it??”