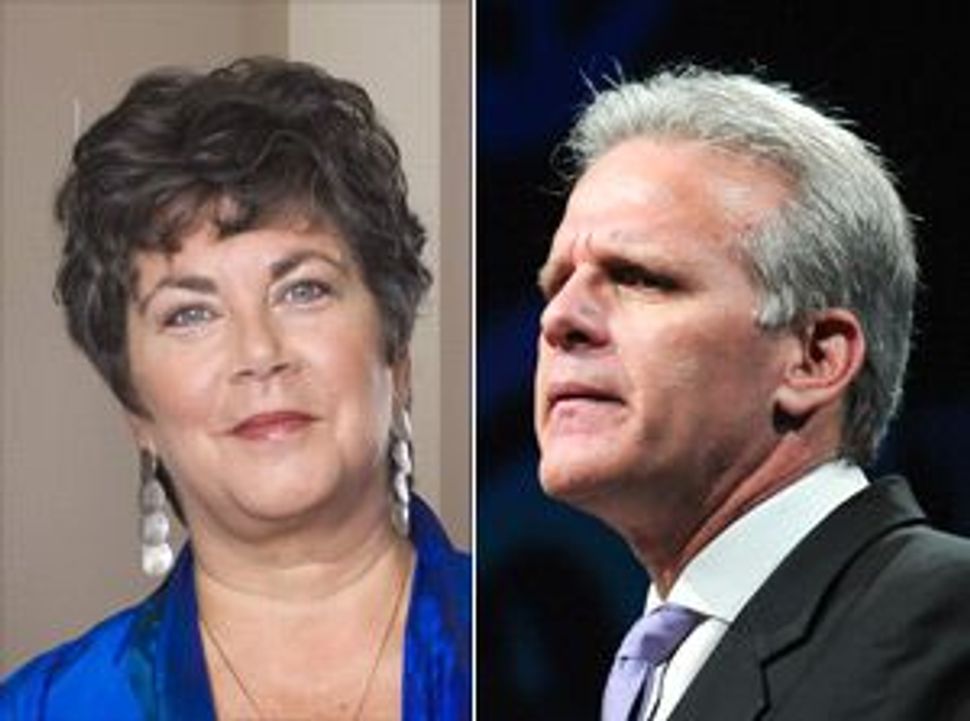 A breach of protocol by the administration’s new envoy on antisemitism came with a heavy price: an implicit rebuke from her superiors at the State Department and a sharp retort from her former colleagues in the organized Jewish community.

In a step widely seen as off limits for government officials, Hannah Rosenthal, the newly appointed envoy, criticized in a newspaper interview the Israeli ambassador to the United States, Michael Oren, for his characterization of J Street as a “unique problem.”

The affair, which stirred emotions within the Jewish community, also highlighted the rift between the Israeli diplomatic mission in the United States and the up-and-coming dovish lobby. More broadly, it underscored Oren’s difficulty in fulfilling his promise, upon assuming his post last May, to reach out to the progressive wing of the Jewish community.

The Rosenthal controversy erupted after an interview she gave to the Israeli daily Haaretz, in which she was asked about Oren’s accusation that J Street was “fooling around with the lives of 7 million people” in Israel, in remarks first reported by the Forward. Rosenthal said that Oren’s comments were “most unfortunate,” adding that the ambassador could have benefited from attending the group’s inaugural Washington conference.

Not only did Rosenthal touch a raw nerve with her remarks on Oren’s strained relations with J Street, but she also broke an unwritten rule that restrains government officials from expressing their views on issues beyond their areas of responsibility, especially when these views involve foreign envoys.

But what could have been a minor slip of a novice official who is new to the ways of government quickly turned into a major debate, with the American administration and the Jewish community rushing to criticize Rosenthal.

Shortly after the interview appeared, Oren spoke, according to an Israeli diplomatic source, with officials in the administrations who “assured him this was not the State Department’s policy.” Later, in an unusual move, the administration put out a statement attributed to Assistant Secretary of State for Near Eastern Affairs Jeffrey Feltman, seeking to reverse the impression created by Rosenthal’s remarks. “The Department of State values its close relationship with Ambassador Michael Oren and his staff at the Embassy of Israel in Washington,” Feltman’s statement read.

Jewish communal leaders also jumped to express disagreement with Rosenthal’s remarks on Oren. Rosenthal, a graduate of the Hebrew Union College-Jewish Institute of Religion and former executive director of the Jewish Council for Public Affairs, is a well-known and highly appreciated figure in the Jewish organizational world. Still, her past credentials did little to stop the wave of criticism coming from within the community. Rosenthal’s outspoken support of the Jewish community’s left wing made things even worse.

“When Hannah Rosenthal was appointed,” wrote Nathan Diament, director of public policy for the Orthodox Union, “we noted the concerns of those who raised questions about her background and connections to J Street, but we reserved judgment.” He concluded that after her remarks about Oren, “the concerns seem to have been warranted.”

Alan Solow, chairman of the Conference of Presidents of Major American Jewish Organizations, issued a statement praising Oren and criticizing Rosenthal: “As an official of the United States government, it is inappropriate for the anti-Semitism envoy to be expressing her personal views on the positions Ambassador Oren has taken as well as on the subject of who needs to be heard from in the Jewish community.”

Solow later told the Forward that his criticism had nothing to do with Rosenthal’s views on J Street. “Even if she’d say the opposite, it would still be inappropriate; she’s not in the business of criticizing the ambassador,” Solow said.

The American Israel Public Affairs Committee endorsed Solow’s statement. And Abraham Foxman, national director of the Anti-Defamation League, added, “She was not appointed to be the critic of Israel or of domestic Jewish politics.”

While criticism from the mainstream Jewish community was to be expected, Rosenthal also got no backing from the left, which chose not to fight this battle.

J Street, the group at the heart of the dispute, declined to comment on the events and on attacks against Rosenthal, who is a former member of J Street’s advisory council. Americans for Peace Now, an organization where Rosenthal used to serve as a board member, also refrained from comment.

Explaining the paucity of public support for Rosenthal, Rabbi Steve Gutow said that on the one hand, “Hannah is a very fine, very smart person who will do an excellent job” as antisemitism envoy, but on the other hand, Jewish groups feel that there is “no place to second-guess Ambassador Oren’s and Israel’s decisions.”

Gutow, who replaced Rosenthal as executive director of the JCPA, expressed his hope that the issue will soon blow over, since it is no more than “one statement at the beginning of a job.”

Other Jewish officials seem to share this sentiment. “If she learned the lesson, she can move on. If not, she will loose her ability to function. It’s up to her,” Foxman said. Solow made clear that Rosenthal is not expected to take any specific action, and he said he believes that she will be able to work successfully with the Jewish community.

But as Jewish groups prepared to let the episode go, the lingering effect of this commotion could actually reflect more on Oren than on Rosenthal. The latest flap and recent remarks by the Israeli ambassador made clear that Oren’s stated goal upon entering the post, of broadening Israel’s outreach to progressive elements in the Jewish community, is far from being reached. Two dovish organizations that are members of the Presidents Conference — Americans for Peace Now and Ameinu — have recently issued statements criticizing Oren’s attacks on J Street. This, too, is a first in the history of relations between Israeli diplomats and American Jewish groups.