To Dance or Not To Dance? 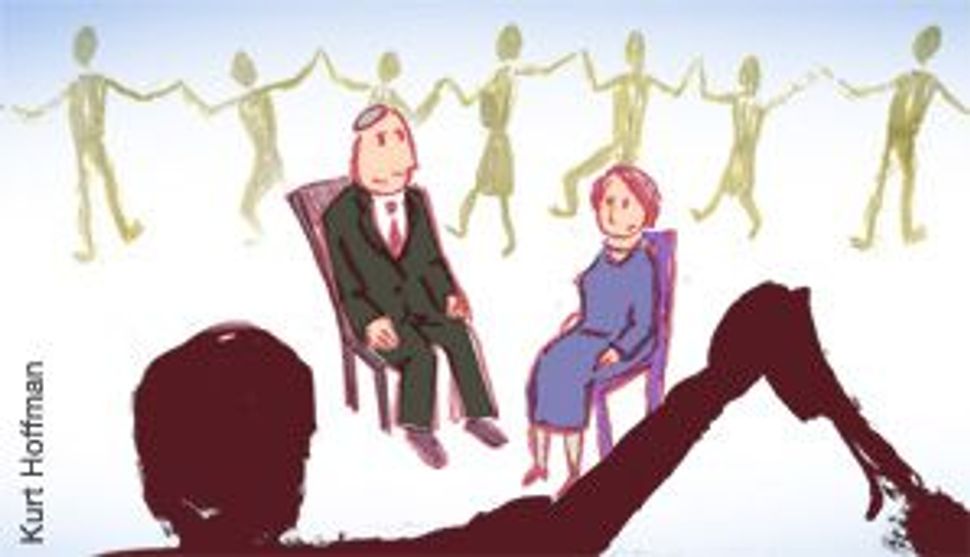 ‘So, are they going to do a mezinke at your brother’s wedding?” a Jewish friend asked this past spring, one eyebrow raised quizzically, as we watched our children play on a jungle gym. I shrugged my shoulders and changed the subject. To her, it was a question of tradition. To me, it was a full-fledged dilemma masquerading as a folk dance. 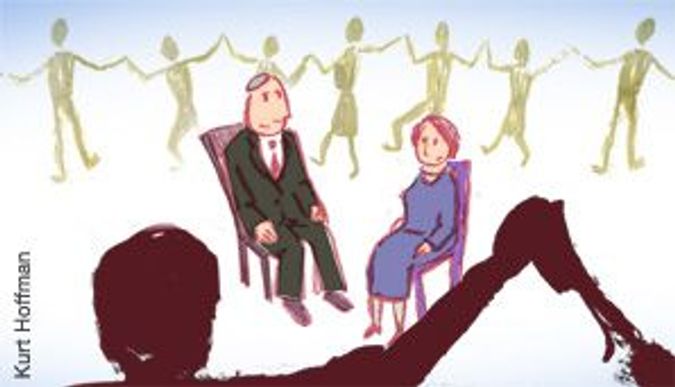 The mezinke tanz, or krenzel, is a special dance done by Ashkenazi Jews at a wedding to honor parents who have just married off their last child. The krenzel, or crown, is the wreath of flowers traditionally placed on the mother’s head during the dance. The parents sit on chairs in the middle of the dance floor, as friends and family dance around them in a circle, with each person kissing them as they pass.

I am the oldest, and certainly not the wisest, of four siblings in a very close family. Coincidentally, all of us got married in semi-chronological order — the three sisters in age order, and, this past July, my brother (the second youngest). In a sense, at the time of his wedding, my brother would be the last child of my parents getting “married off.” Hence, my parents should technically be honored with a mezinke. But, at the time of my brother’s wedding, I was in the end throes of a long-awaited divorce: still legally married, but trying very hard not to be.

And so: to mezinke or not to mezinke. That was the question.

Like everything else in Judaism, the mezinke has gone through various permutations. According to Hankus Netsky, founder of the Klezmer Conservatory Band and professor of Jewish music at the New England Conservatory, the dance is a Ukrainian custom, brought to America by Ukrainian Jews. Mezinke literally means “youngest daughter” in Yiddish. For Americans, who are a more egalitarian sort, it became custom to do the mezinke for the last child who is “married off.”

So why do we celebrate with a mezinke in the first place? Helen Winkler, who runs the Web site yiddishdance.com, said via e-mail, “I’m not sure what the emotions behind the dance were in Europe — whether it’s joy in the marriage, or relief that the last child has finally been married off. However, for parents, it was a major concern to make sure the girls did marry and because the father of the bride had to come up with a dowry, it was quite stressful — especially if there were several daughters in the family and the family wasn’t rich. My guess is it would be a combination of both joy and relief.”

Joy and relief. The continued existence of my marriage, in contrast, provided me with neither. It’s the 21st century and women don’t need dowries. Moreover, in my situation, I desperately wanted to be divorced. It struck me as ironic that the fact that I was still technically married was enough to set the gears in motion for this dance that would celebrate my “achievement” of being “married off” — an achievement that was neither an achievement nor something to be celebrated. What were we celebrating here? What was more important: whether I was married off, or whether I was truly happy?

My parents and I had a sit-down and agreed: There would be no mezinke at my brother’s wedding. My marriage was reaching its end — and, my mother wondered aloud, in an era of rampant divorce, to what extent would the mezinke become a dinosaur of a custom, a fossil from another era? We had a laugh about it and moved on. It bothered me a bit, but I put it out of my mind in light of the upcoming simcha.

My brother’s wedding was a joyous and raucous affair. After the ceremony, hundreds of guests flooded the dance floor to celebrate with our family.

In the middle of the hora mega-dance, after my brother and new sister-in-law had descended from the wobbly chairs hoisted in the air, the music suddenly slowed. “Ladies and gentlemen, I want you to hold hands with the person next to you and put your hands over your head,” the bandleader intoned. I’d only heard this music once before at a friend’s wedding, but I immediately knew what it was: the mezinke.

My mother and I, across the circle of the hora, exchanged quick looks of alarm. It seemed as though the mezinke was about to start, and, like an avalanche, there would be nothing anyone could do to stop it.

Like an electrical current, instructions were passed swiftly and surreptitiously to the bandleader, and the music swung up tempo again, back into the hora. It was as though nothing had happened. The mezinke remained undanced.

So I will wait. Maybe it will happen, and maybe it won’t — maybe I’ll never remarry. As they say, woman plans, God laughs… or something like that.

Believe me, I wish I could have given my parents that dance. But it was the wrong time. I would love to have the privilege of seeing my parents’ faces as they sit in those chairs and my family and I dance in front of them. I imagine their happiness knowing that, despite everything I have gone through, I have found joy. As a parent, I know that there is nothing greater than the happiness derived from seeing your child truly happy and at peace. And as a child, I know that there is no greater gift I could give them.

But I won’t dance the mezinke unless I mean it.

Jordana Horn is a (divorced) lawyer and writer working on her first novel.

To Dance or Not To Dance?