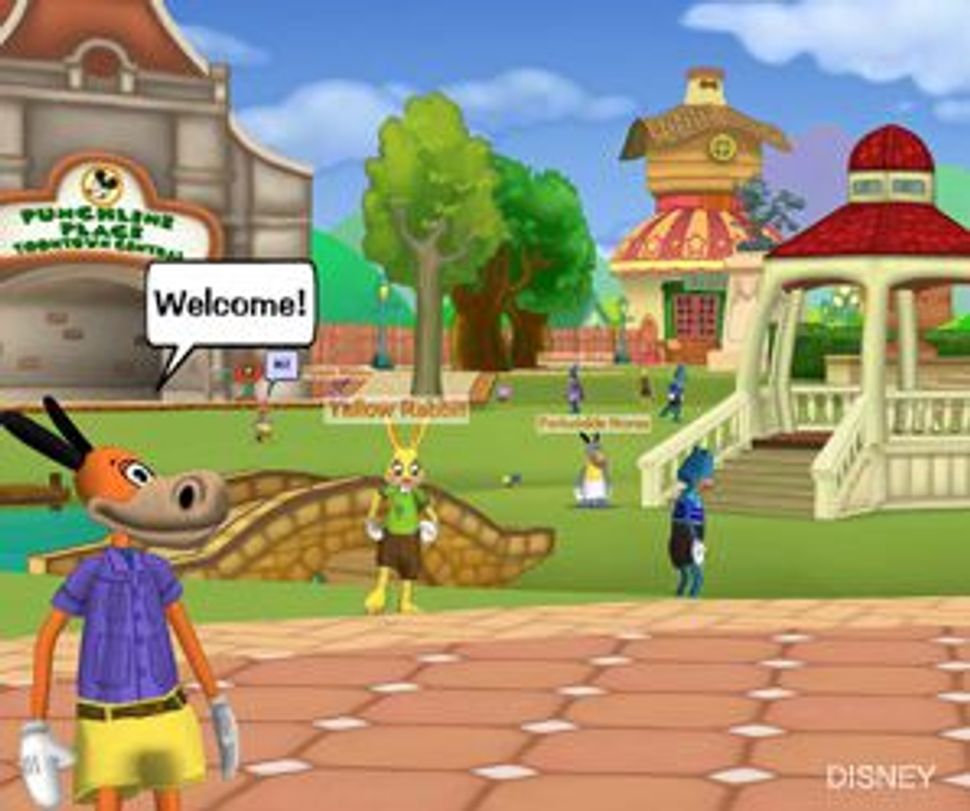 POWERPLAY: Toontown is an online multi-player game that Josie adores.

In addiction, the first step is admitting you have a problem. And Josie has a problem. She’s jonesing for Toontown. 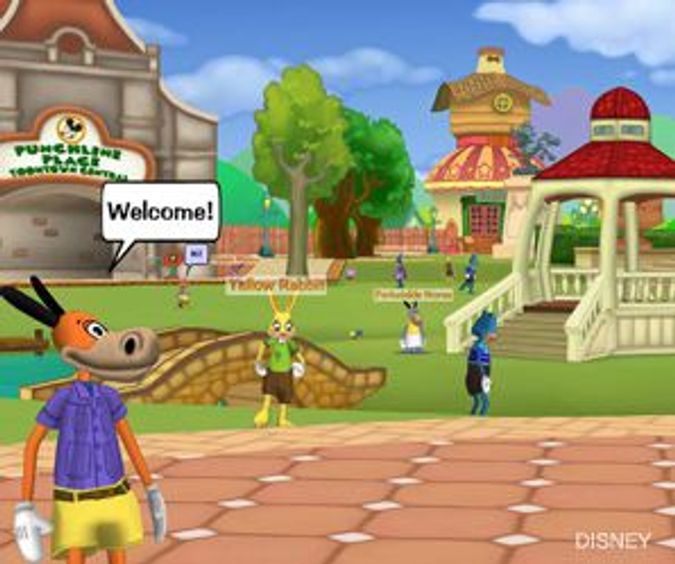 POWERPLAY: Toontown is an online multi-player game that Josie adores.

Toontown is an online multi-player game. The Toons, cute animated creatures, struggle to defend Toontown from the Cogs, soulless corporate robots in boxy business suits trying to turn the colorful town into a dreary gray office park. (The game is part of the Disney empire, and one imagines animators with soul patches fantasizing about striking back at their own power-tie-wearing overlords.) The Toons bombard the Cogs with cream pies, seltzer sprays, lapel-flower squirts and other classic gags. The Cogs, who have titles like Micromanager, Glad Hander and Pencil Pusher, fight back with weapons like Red Tape, Double Talk, Jargon and Finger Wags. (I admit it’s funny to hear my 6-year-old wail, “Oh no, I’ve been hit by a paradigm shift!” And when a Cog bellows “Synergy!” and unleashes a cloud of sparkly glitter, I am reminded all too well of my brief stint at a cable network.)

Auntie Ellen is a Toontown producer, and therefore responsible for getting Josie hooked. (The first taste is always free.) Now Josie wakes up begging to play Toontown with Daddy, noodges us to let her play for a few minutes before bedtime, plays for hours on weekends.

I have no problems with Toontown itself. It’s clever, collaborative, rewards cooperation, comes with built-in child safety features. I don’t think it’s too violent, though the Cogs do explode in a shower of nuts and bolts when bombarded with banana peels and anvils.

I do have a problem with Josie’s reactions to the game. Though Toontown is not a solitary pursuit (she has online friends she plays with, as well as Daddy and Ellen), it still involves a lot of time staring at a screen. And Josie gets extremely worked up, screaming in frustration when she gets stuck in a maze or loses at Tug O’War. When she’s playing with Jonathan, she sometimes calls him a stupid-head, behavior I won’t tolerate… but he’s so absorbed, he doesn’t always call her on it. I also hate that when she and Jonathan play in the mornings or at night, I’m the one nagging her to log off, brush her teeth, get ready for school, etc. Dude, so not fair that I’m the drudge and he’s the Fun Parent.

But that’s a subject for couple’s therapy. Do I think Toontown and other online games are genuinely bad for kids? Jonathan, who has a PhD from Stanford in communication theory and research and works as a media and technology pundit when not shooting his Toon avatar out of a cannon, is skeptical. “All the research about gaming is driven either by the industry or by people who want to prove it’s bad,” he says. Given the warring agendas at play and the difficulty of conducting valid research on the topic, it’s hard to figure out what effect gaming actually has on kids.

One thing’s for sure: A lot of kids are playing. According to a survey conducted by the National Institute on Media and the Family, 92% of kids under 18 play video games. On any given day, 30% of all American kids ages 2 to 18 will play, for an average of an hour a day.

On most measures, gamers don’t fare any worse than non-gamers. A recent University of Texas at Austin study of 1,500 teenagers found that gamers were no less sociable than their peers — they spent as much time with their parents and friends and were just as involved in after-school sports and activities. Compared with non-gamers, they did spend slightly less time reading and doing homework. (But as science writer Tara Parker-Pope pointed out in the New York Times, high achievers also tend to spend less time on homework.) The researchers hypothesized that gamers were actually able to use their time more efficiently. And then there’s the 2006 study led by Michigan State University psychologist Linda Jackson, PhD, which found that, among primarily low-income children who were given computers in exchange for continuous online monitoring and periodic interviews, Internet use — whether for gaming or Web-surfing — improved standardized reading test scores and grade-point averages across the board. Other researchers have found that having the Internet at home encourages children to be more self-directed learners.

But what about violent games? Do they make kids more violent? The evidence is inconclusive. When I interviewed Jeanne B. Funk, director of the Clinical Psychology Training Program at the University of Toledo and an expert on kids and media, about this subject a few years ago, she said, “We have some evidence for measurable behavior change in studies done in the ’80s: After little kids played aggressive games, they were more aggressive. We don’t see the same effect with older kids, but it’s also harder to measure with older kids, because they don’t run around hitting each other.” And are there long-term effects? Funk answered, “My thought is that there’s a small group of kids who are a little more vulnerable to violence, and those are the kids with whom we may see some effect. When you add one more thing to their relative risk — to poverty, to their parents’ discipline patterns — that may cause a measurable behavior change. Media exposure to violence is not the most important thing, but it’s the easiest thing to change.”

And even if physiological changes and post-game aggressive feelings are fleeting, long-term effects may persist. A few years ago, Donald Roberts, former chair of the Stanford University Department of Communication, told me, “There are other concerns besides ‘Does gaming make you more violent?’ Such as: How would you act on a jury? What’s the probability you overestimate how dangerous the world is? How likely are you to go to the aid of someone else? I don’t know whether fear and desensitization to violence are traceable to vicarious violence, but these are legitimate questions.”

Of course, people have been screaming about media destroying children’s minds since Og told his fellow cavemen about the big bear that got away. Plato, in “The Republic,” wanted to censor storytellers: “And the stories on the accepted list we will induce nurses and mothers to tell to the children and so shape their souls,” he wrote. “But most of the stories they now tell we must reject.” Every new medium has brought out doom-criers: comic books, music, movies, TV, “first-person shooter” video games. And today, everything changes so fast. Are studies about games of the ’80s relevant to today’s online multi-player games and physical, active Nintendo Wii?

Speaking of Wii, I’m not neutral. I love it. Jonathan got one for work; its wireless, hand-held remote control makes gaming physical. Our family plays Wii bowling at least once a week — you actually hold the remote as if it were a bowling ball, take steps and swing your arm as if in a real alley, and the pins on screen go flying. Josie regularly beats Jonathan and me, while Maxine jumps around on the sidelines screaming, “Great shot! Strike! Spare!” at random intervals. We have fun as a family and actually sweat. A New Zealand study in the journal Pediatric Exercise Science found that “active video games” like the Wii and Dance, Dance Revolution provided as much exercise as jogging or skipping.

But Toontown is iffier for me. I think my kid is too young, is indulged too much, and is not being properly disciplined when she plays. Still, I hesitate to lay down the hammer (or anvil, or banana peel) because the real problem is a power struggle between Jonathan and me. Life, like gaming, can be complicated.