With Their Men in Iraq, Wives Fight an Emotional Battle on the Home Front 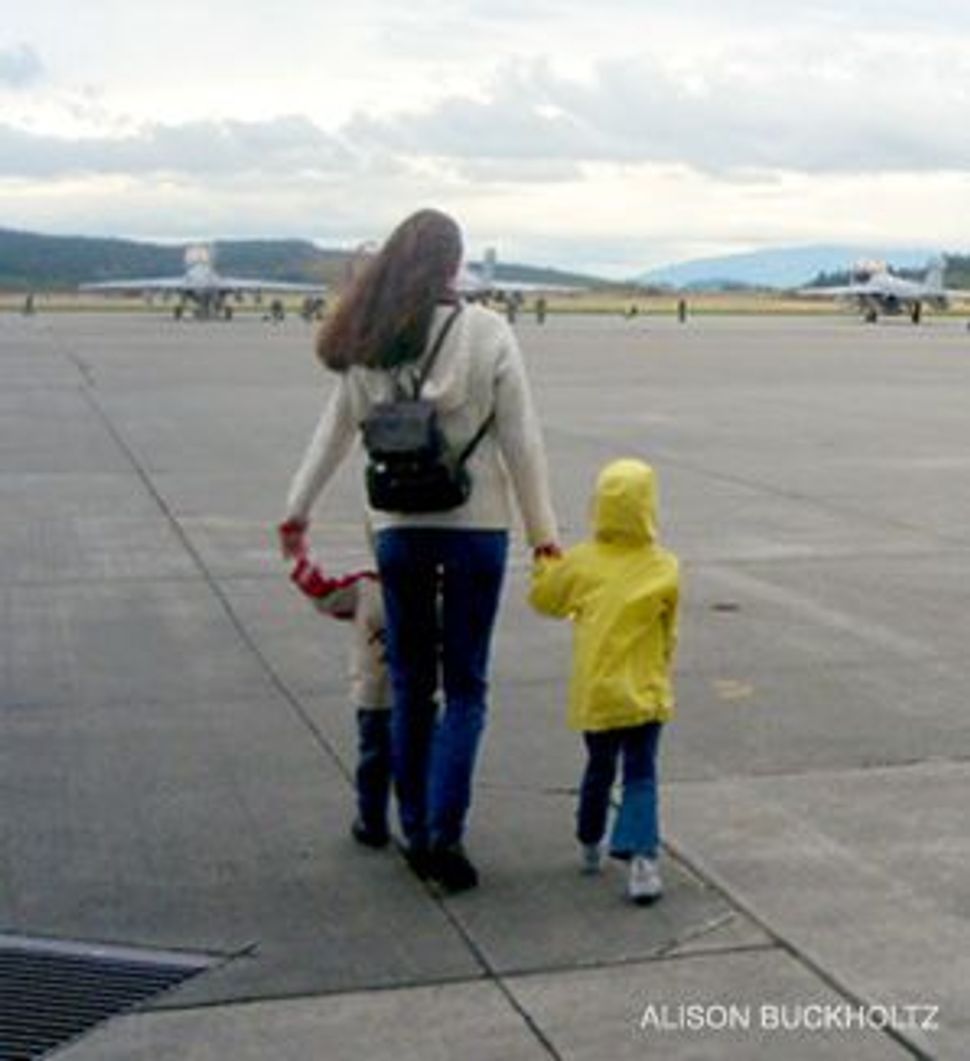 When we moved last year from the Washington, D.C., area to Anacortes, Wash. — a Thornton Wilder-era town in the far northwest corner of the state — I spent the first few months cataloging all that was missing from our new home. My parents were gone from our day-to-day lives; back east, in our cozy suburb, they lived just a few houses away, often baby-sitting for our kids, Ethan, 4, and Esther, 2. We also left behind a close-knit Jewish community, three synagogues within walking distance and any possibility of Sabbath lunch-hopping in the neighborhood. 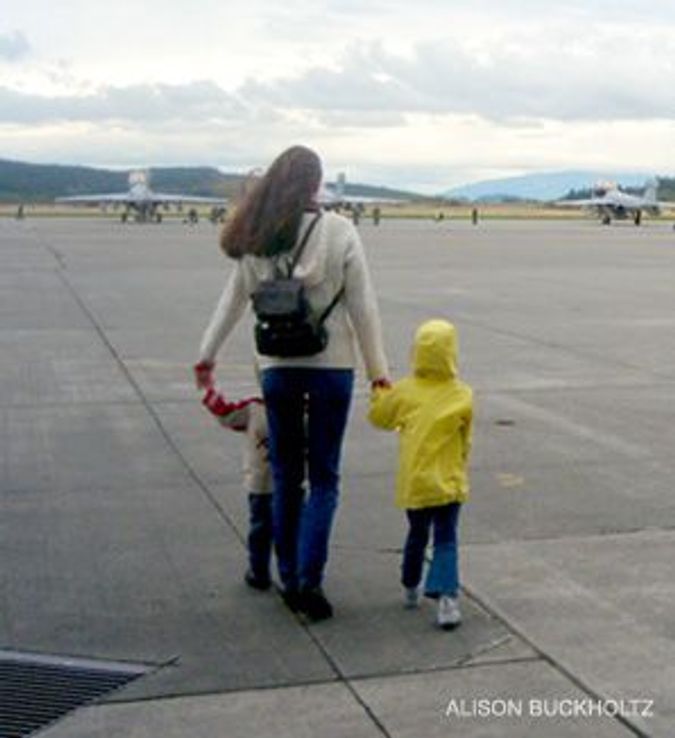 But of everything in Anacortes that wasn’t there, one absence in particular stood out.

I shouldn’t have been surprised. We moved to Anacortes because my husband, Scott, an active-duty U.S. Navy pilot, transferred to a local military base. Our town of 15,000 has a significant military population, service members whose tours are marked by frequent absences leading to at least one six-to-nine month deployment overseas. Because of a new policy of sending individual naval personnel to Iraq and Afghanistan on one-year assignments to supplement the ranks of the other services — and an aggressive wartime deployment schedule — many of the local squadrons are away from home.

Scott is now in the middle of a seven-month cruise on an aircraft carrier, and most of the women I’ve become friendly with are also married to military men shipped overseas for more than half a year at a time. Together, we take our kids to the library and out to dinner so that our own families don’t seem so small. In summer we fill weekends with picnics at the beach, and in winter we trek to nearby children’s museums. Year-round we hike the lush, kid-friendly trails that crisscross Anacortes’s forestlands.

There are almost always other mom-kid constellations eager for play dates. But I quickly discovered that the loneliest days are Sundays — especially Sunday mornings, when nearly everyone I know here goes to church and most everything is closed. We’ve been fortunate to make good friends during my husband’s many tours of duty in a variety of places around the world, and in a half-dozen years the religious practices of our colleagues rarely crossed our minds.

Now that I am on my own, though, I’ve come to dread those Sunday mornings, when it feels like the kids and I are the only people on Earth not on our way to or from a worship service.

But then Monday rolls around again, and we military moms kick into action. I say “we,” though I resisted the sisterhood of single mothers for much of my first year here, when Scott was gone every other month as part of his squadron’s preparation for deployment. Despite an avalanche of evidence to the contrary, I was convinced that our family was doing fine — and that my husband’s love and support, even when he was far away, made the use of the term “single mother,” even in jest, a betrayal.

My heart went out to real single mothers who weren’t counting down the months until their husbands’ return: divorced women, those whose husbands or partners had vanished and grieving war widows. Many of the nonmilitary men in Anacortes make their living on the water — salmon fishing in Alaska all summer and crabbing on Puget Sound throughout fall and winter — and I feel nothing but sympathy for the wives left behind.

For myself, though, I resisted the vulnerability telegraphed by the phrase “left behind.” I reminded myself that countless women have carried on brilliantly in much harsher circumstances.

So I tried not to complain, either — not about our moves, not about the family and community I missed, not about raising two intense children on my own.

My own self-deception weaved a comfortable web for our entire first year here. It unraveled midway through one of Scott’s absences last summer, when my brother Joshua was visiting. Sometime that week — perhaps it was the presence of another man in the house — Ethan had started to realize that Daddy was gone. Gone forever, probably, in his mind. He absentmindedly started calling my brother “Daddy,” and Joshua kept correcting him. We reminded Ethan that Scott was coming back and that his father loved him very much.

But Ethan was sad. And mad. Temper tantrum piled upon temper tantrum. Ridiculous requests were followed by vicious anger, topped by howling desolation.

And then came another lonely Sunday.

Joshua, the kids and I had just settled in for dinner at one of the only restaurants open, a pizza joint that Ethan loved. But the greasy slice reminded him of his aborted romance with Dad, and the screaming began. I walked him out to our minivan as he hollered his opposition. I opened the door and sat him inside. With the door still open, I stood on the sidewalk; I talked, and he screamed. When he finally calmed down, we walked, hand in hand, back to the restaurant and sat down for a bite.

As I was chewing, I looked up to see a woman standing at the head of our table. She was probably in her late 50s, and she wore her hair in a loose, low ponytail. She held a book in front of her.

“I just wanted to tell you that I was listening to everything you said outside,” she explained. She was visibly quivering, exerting a tremendous force of will to overcome her shyness. “I’ve been reading this book” — she thrust it out — “and I want you to know you’re doing everything right.”

The book was “The Loved Dog: The Playful, Nonaggressive Way To Teach Your Dog Good Behavior.” A dog-training manual. I did a two-second assessment. She didn’t look crazy.

“You’re doing everything right,” she repeated.

I crumpled and began to sob.

I choked out a few more tears, wiped my face with the coarsest of paper napkins and asked Joshua what he’d said to her. “I said, ‘You’re going now,’” he answered.

I was startled. Such harsh words and behavior were totally out of character for my gentle brother, and I realized he was trying to protect me. But I was worried about something else. Anacortes is a small town, and I knew I would run into this woman at the post office or at a coffee shop. I didn’t want to pretend I didn’t know her. After all, she had taken a risk to be kind. She had tried to do a good deed, even though I wasn’t in a position to hear her out. But it seemed like she had something to say.

Thanking her would be the least I could do.

She hadn’t wandered far. She was peering into the window of a nearby store, clutching a wadded-up tissue in her hand.

“I’m so sorry,” I said. “You were so nice to reach out.” She held up the book again. That damn book! The dogginess of it all kept intruding on our moment.

“You were kind, you were not threatening, you didn’t intimidate,” she said. “You did everything the book says you should do.”

She gave me a hug. She smelled like a mom — like clean, generic drugstore shampoo. “Your brother told me your husband is away,” she said. “I was a single mom, too, for my son’s whole life. It was hard, but we did it. And he turned out great.”

That was when I saw it: We weren’t doing great. And the effort to convince myself otherwise was going to prevent us from ever doing any better. This woman saw the signs; she read my life as if it were a rune. As a civilian with no stake in keeping up appearances for the Navy, she didn’t need to pretend that her struggle to raise a child alone hadn’t been agonizing. She’d been there, and her only interest had been in surviving. On that basis, she adopted me into the sisterhood of single mothers everywhere.

I don’t agree with her belief that I’m doing everything right. Most days I’m convinced I’m doing everything wrong. But as my husband’s deployment tramples across our year, the kids’ lives, and mine, march forward with the same sense of purpose that characterizes our hikes through Anacortes’s forests. And now, when I cross paths with another mother shepherding her kids along the damp, fragrant trails, I greet her with a knowing smile. Sometimes we even walk together a bit.

Alison Buckholtz is a writer living in Anacortes, Wash. Her memoir on life as a military family will be published by Penguin in 2009.

With Their Men in Iraq, Wives Fight an Emotional Battle on the Home Front