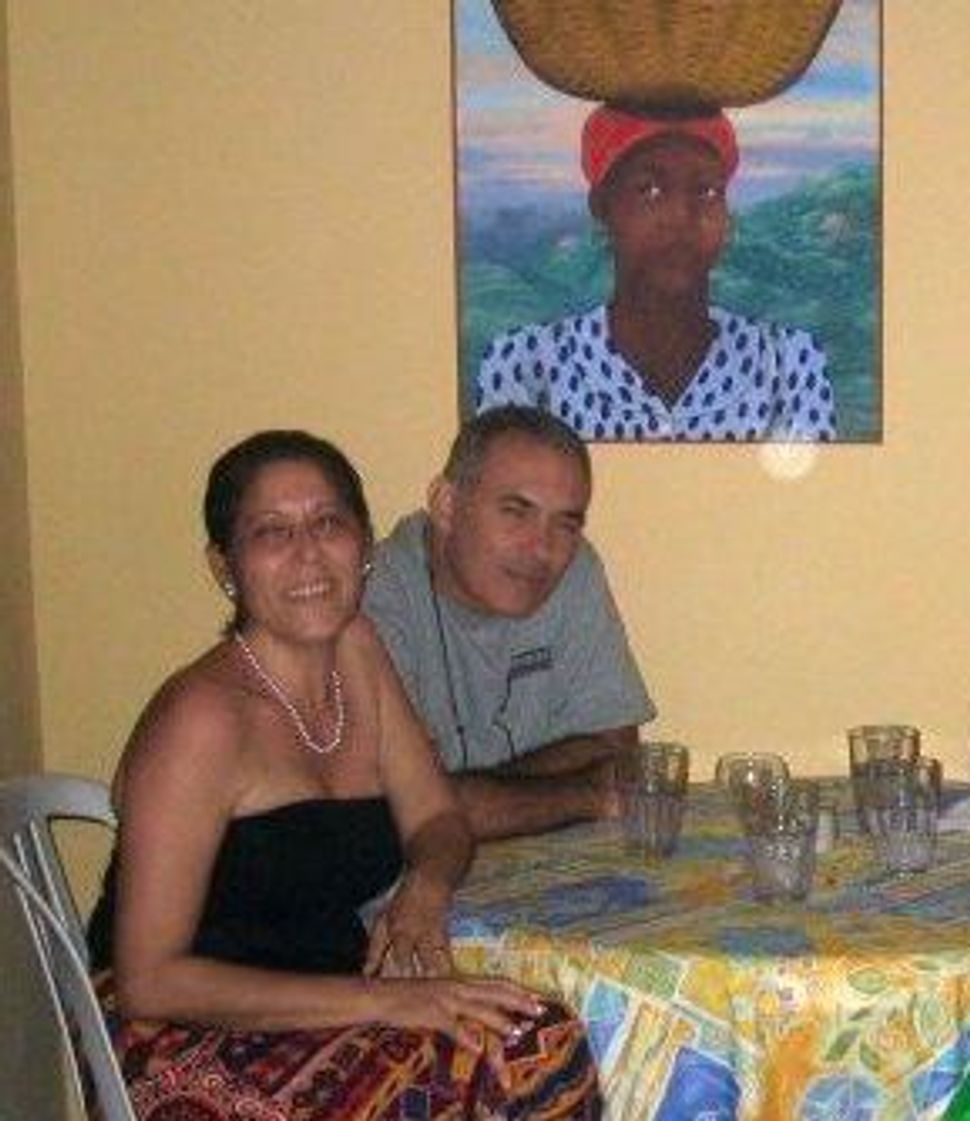 Each year on Yom Kippur, Rudolph Dana locks himself in his Pétionville, Haiti, home — protected by guard dogs and security personnel — and passes the Day of Atonement fasting, praying and reciting the traditional liturgy of repentance and forgiveness.

Up until about 10 years ago, Haiti’s tiny Jewish community would gather in a home on Yom Kippur and pray alongside a video recording of a Yom Kippur service that Dana’s brother-in-law, a cantor at a New Jersey synagogue, had mailed to him. But in recent years, the community has become too small and disjointed to warrant even such modest holiday gatherings.

When the catastrophic, 7.0-magnitude earthquake shook Haiti on January 12, Dana happened to be in Miami on business. In the days since the quake — which leveled much of the Haitian capital of Port-au-Prince and the surrounding areas, including Pétionville — Dana, 61, who owns a propane-distribution company, has been on the phone and Internet around the clock, trying to make contact with friends and his nearly 500 employees. 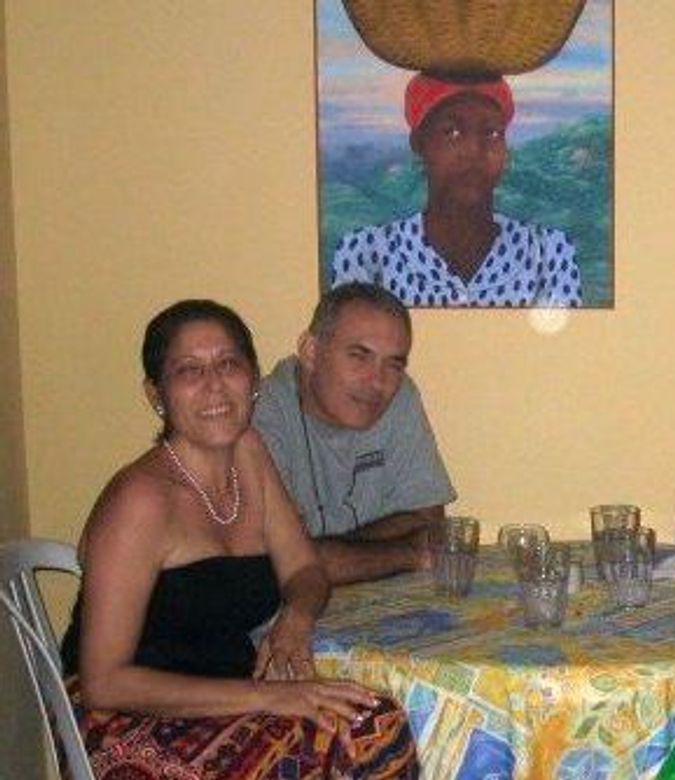 Most, but not all, of the people who work for him survived the quake, but many of them lost loved ones. Dana says hundreds of his friends and acquaintances died in the disaster. “Some were in the supermarket; some were in schools; some were in universities; some were in banks,” he said.

Those who survived are homeless. Their homes have been either reduced to rubble or, like Dana’s house, suffered major structural damage, rendering them unsafe. The more fortunate Haitians are living out of their cars, and the less fortunate ones are sleeping outside on tarps, Dana said.

“All of the hotels and churches and places that people could gather have been destroyed,” he said. “It’s not like one is good, and the others are down; they’re all down or could collapse at any time. There is no more city.”

He has been in touch, via an Internet-enabled satellite phone that he kept in his Port-au-Prince office, with many of his employees, who have managed to set up a makeshift office, outside of the badly damaged building that housed his company. These days, they’re not dealing in propane, but in rice, beans and cooking oil. Dana said he managed, through his business connections, to get a shipment of food staples, and that his company has been distributing meals — cooked with firewood — to some 300 people camped out near the office park.

Dana said he is not sure when he will return to the country where his grandparents settled at the turn of the 20th century, and where he was born and has lived for most of his life.

Back in 1492, Luis de Torres, Christopher Columbus’s interpreter, was the first known Jew to step foot on what is now Haiti. Brazilian immigrants of Jewish ancestry settled there in the 17th century, though many perished in the slave revolts at the turn of the 19th century that ultimately established Haiti’s independence from France.

Then came a small wave of Jewish immigration to Haiti from Lebanon, Syria and Egypt — the influx that brought Dana’s grandparents — during the late-19th and early-20th centuries. Many of these Middle Eastern Jewish immigrants made a living importing and selling textiles, and they sent their children to the local Catholic schools. The island’s Jews were joined during the 1930s by about 100 European Jews who came to Haiti fleeing the Nazis. The Haitian Jewish community peaked mid-century at about 300 members, many of whom left for larger, more established Jewish communities in the United States, Argentina and Panama.

Archaeologists have also found evidence of a Crypto-Jewish, or Marrano, community that once existed in the western Haitian city of Jérémie.

During the 1940s and 1950s, Jews who grew up in and around Port-au-Prince remember how the community would import matzah for Passover and would gather together, 50 to 60 people strong, for High Holy Day services. “Services were held in one of the largest homes; men sat in the front and women sat in the back,” said Vivianne Esses, 76, who lived with her family in Pétionville until she was 13, before moving to Bogotá, Colombia, and, later, to Brooklyn, N.Y.

In Jérémie, where Marie Mizrahi grew up in the 1940s and 1950s, hers was one of only a couple of Jewish families in town. Although she and her family weren’t particularly observant, they managed to observe Jewish traditions. “We ate chicken and beef, but never shrimp or pork,” she said. “I have five brothers, and they were all circumcised.”

Both Esses and Mizrahi fondly recalled the sweetness of Haiti’s mangos, the fruit that remains one of the country’s main exports.

Today, Haiti — a country of 9 million people, where the dominant religions are Catholicism and Vodou — has an estimated 25 Jews. Most of them live in Pétionville, a relatively affluent enclave situated in the hills above Port-au-Prince. Some of the country’s Jews are among the wealthiest residents of the island nation, where about 80% of people live in poverty.

Haiti has no rabbi and no synagogue. Dana can’t remember the last time local Jews were able to gather a minyan. There is a Torah, which is kept in the home of Dana’s cousin Gilbert Bigio, the Haitian business magnate with interests in the steel, telecommunications, banking, petroleum, and food sectors.

One of Haiti’s wealthiest citizens and the de facto leader of the island’s Jewish community, Bigio owns the land on which Israel recently set up its military field hospital, according to Amos Radian, Israel’s Dominican Republic-based ambassador to the nations of the eastern Caribbean.

Radian said he arrived in Haiti about 16 hours after the earthquake and, after meeting with Haitian President René Préval, began to look for Gilbert Bigio’s son Reuven Bigio. Gilbert Bigio, who is Israel’s honorary consul in Haiti, was in Florida at the time of the earthquake. The ambassador had received word that the Bigio family had survived the earthquake. But because nearly all forms of electronic communication were down, it took more than a day to locate him.

Radian, speaking with the Forward from the IDF field hospital, said that the Bigio family has been “the key for our success” in opening the hospital just hours after the Israeli army team’s January 15 arrival.

Haiti and Israel maintain full diplomatic relations. Radian said that, during the 1960s and 1970s, Israel’s international development organization, Mashav, was active in creating “special farms” in Haiti, and teaching locals about sustainable agricultural practices, such as the use of drip irrigation and greenhouses.

Kenneth Ades, 41, a Jew who resided in Haiti as a child, said his father, a writer and real estate investor who lived in Pétionville until his death in 2005, had his own plan for improving Haiti’s agriculture, legal system and general infrastructure.

“He was very, very patriotic about Haiti,” said Ades, who lives in New York. “He had a blueprint to bring Haiti back; he said it was going to cost $6 billion.”

That was before the earthquake.