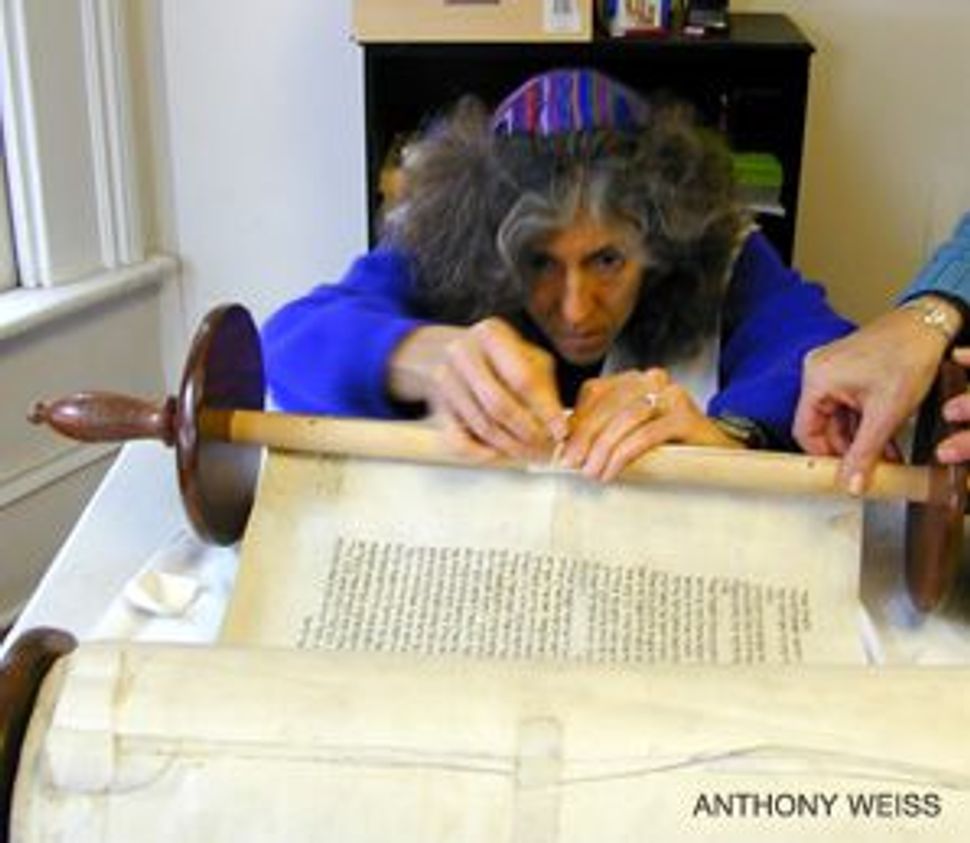 Saratoga Springs, N.Y. – This idyllic town near the Adirondack Mountains is better known for horse racing than for holiness; visitors flock here to bathe in mineral springs rather than in mikvehs. But for Rabbi Linda Motzkin, Saratoga Springs has proved to be ideal for something more unexpected: the sacred work of writing a Torah. 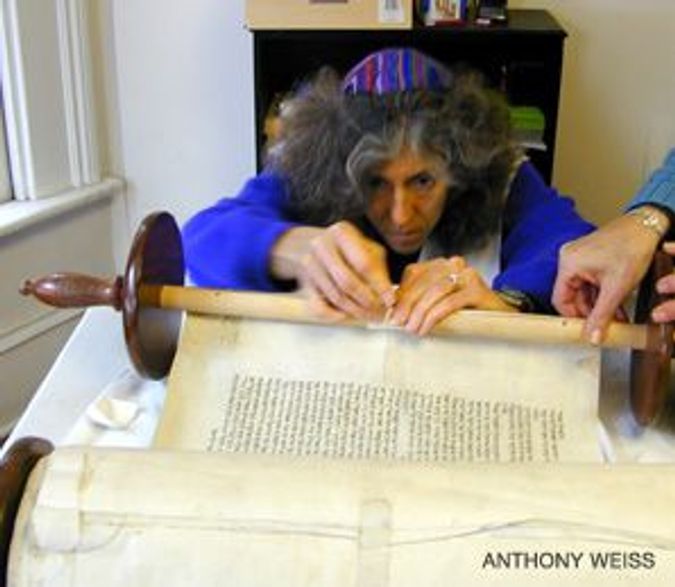 Motzkin, a Reform rabbi at Saratoga Springs’s Temple Sinai, is part of a small but growing movement of women around the world who are writing Torah scrolls. Breaking into the traditionalist trade has been rife with obstacles, most famously the fact that scribes learn via apprenticeship. Even now, few professionals will pass on their knowledge to women. After finding a rabbi who would teach her, however, Motzkin noted an even more daunting challenge: How to acquire the basic materials, if the vendors refuse to knowingly sell to a woman?

Motzkin, who refused to obtain the tools of her holy trade under a pretense, turned instead to her own backyard, drawing on the townspeople and the environs of Saratoga to fashion her own materials.

Motzkin makes her own parchment out of deerskin, bounty given to her by local hunters, fashions quills from reeds or bird feathers, and ritually

immerses herself in a neighbor’s pond. The ink she uses was a gift from her teacher, but she is working with a congregant to brew her own. So far, they haven’t made a batch to her liking, but she’s still trying.

“Getting materials that are born out of an act of deception seems in contradiction to the very notion of writing a sacred text,” Motzkin said. “Everything I’m doing is up-front. All the materials, everybody who’s helped me make stuff are people who know what I’m up to and want to support it.”

Motzkin first learned Hebrew calligraphy while in college, when she studied under respected calligrapher, David Moss. For years afterward, she incorporated Hebrew calligraphy into her art projects and used her talents to make marriage contracts, invitations, her synagogue’s logo and the cover of a prayer book.

Then, in the summer of 2003, she attended a workshop called “How To Make Your Own Mezuzah,” taught by Kevin Hale, a Reconstructionist rabbi and scribe. Thrilled by the class, Motzkin asked Hale to take her on as a student so that she could become a scribe herself. Instead, Hale recommended his own teacher, Rabbi Eric Ray.

Ray was an Orthodox rabbi and a classical scribe, but he was also a man of the modern world, with a doctorate in graphic design. And according to Motzkin, he was deeply concerned about training more scribes to care for deteriorating scrolls, a quest that led him to take on students who fell outside the world of Orthodox scribes.

Motzkin went to visit Ray, bringing along samples of her calligraphic work as well as several Hebrew textbooks she authored, and Ray agreed to take her on as his first female student. She studied under him from late 2003 until his death in 2005.

Motzkin remembers Ray as a kind and respectful teacher, but she says he also wrestled with the legal implications of teaching a woman to ink a Torah. Ironically, Motzkin’s position as a rabbi helped him to justify his decision. She recalls that, in one conversation, Ray cited part of a talmudic passage on scribes where it says that a scribe must be one who is empowered to lead the community in prayer. He then told her that she, as a rabbi, had a community that had empowered her to lead it in prayer. She added, “This is not something that would have any halachic weight whatsoever, but this is what Eric did to rationalize in his own mind.”

In regular lessons, Ray taught Motzkin the basics of being a scribe: He showed her how to cut a quill and how to shape her letters, and instructed her in the myriad halachic restrictions that a scribe must follow to make a Torah holy. Motzkin takes great care to follow the Halacha strictly, both out of respect for Ray and as a statement of her own legitimacy as a scribe. In fact, she has found that she is often stricter than members of the Orthodox establishment.

“In every place where I’ve come up against a leniency… I’ve followed what’s more stringent,” she said. “I want this Torah to be absolutely kosher to the highest standards in every way, except for what has to do with women.”

That respect for Halacha is part of Motzkin’s process from the very beginning. After receiving a deerskin from the hunters, she recites a blessing as she begins to prepare the hides herself — soaking them in limewater, stretching them on wooden frames she has built, then sanding and trimming them to the proper texture and proportions.

Once the parchment is ready, she takes a quill of her own making — either a reed or a bird feather. Recently, a friend told her that he was slaughtering turkeys for Thanksgiving and invited her to gather feathers for her scribal work. Motzkin gathered the feathers, but she has set them aside because Ray taught her that a feather from a slaughtered bird must wait for a year before it can be used to write a Torah; the reasoning behind this is to separate the killing from the holy work of Torah writing. (She is currently using feathers from last year’s slaughter.)

The local approach isn’t always easy. For example, before a scribe writes certain names of God, he or she must visit a mikveh, or ritual bath; however, there is no mikveh in Saratoga Springs, and even if there were, traditional mikveh attendants would likely frown on Motzkin’s nontraditional purpose. Instead, Motzkin uses a neighbor’s pond as her mikveh. Still, this means that, in Saratoga’s freezing winters, she hasn’t been able to immerse herself, and the text is studded with blanks where she has had to leave out the names of God. She plans to fill them in later.

Motzkin still has a long way to go. Because she is employed full time as a rabbi and as a chaplain at nearby Skidmore College, Motzkin is only able to work on the Torah for two or three hours a week. Working at that pace, it took her two years to write a Megillah, and the Torah has more than 12 times as many columns — and the columns are twice as long. She is getting faster, and an upcoming sabbatical will give her more time to write, but it will still be years, if not decades, before she expects to be done. Still, Motzkin sees her own Torah as only a small part of the work she is undertaking.

“Something like this should not be closed off to 50% of the human beings in the world,” she said. “In the area of gender, I think Halacha will evolve. And if anything, I see myself as in a small piece pushing that evolution along.”