After 500 Years in Hiding, Jews Bring Prosperity to Iberian Town 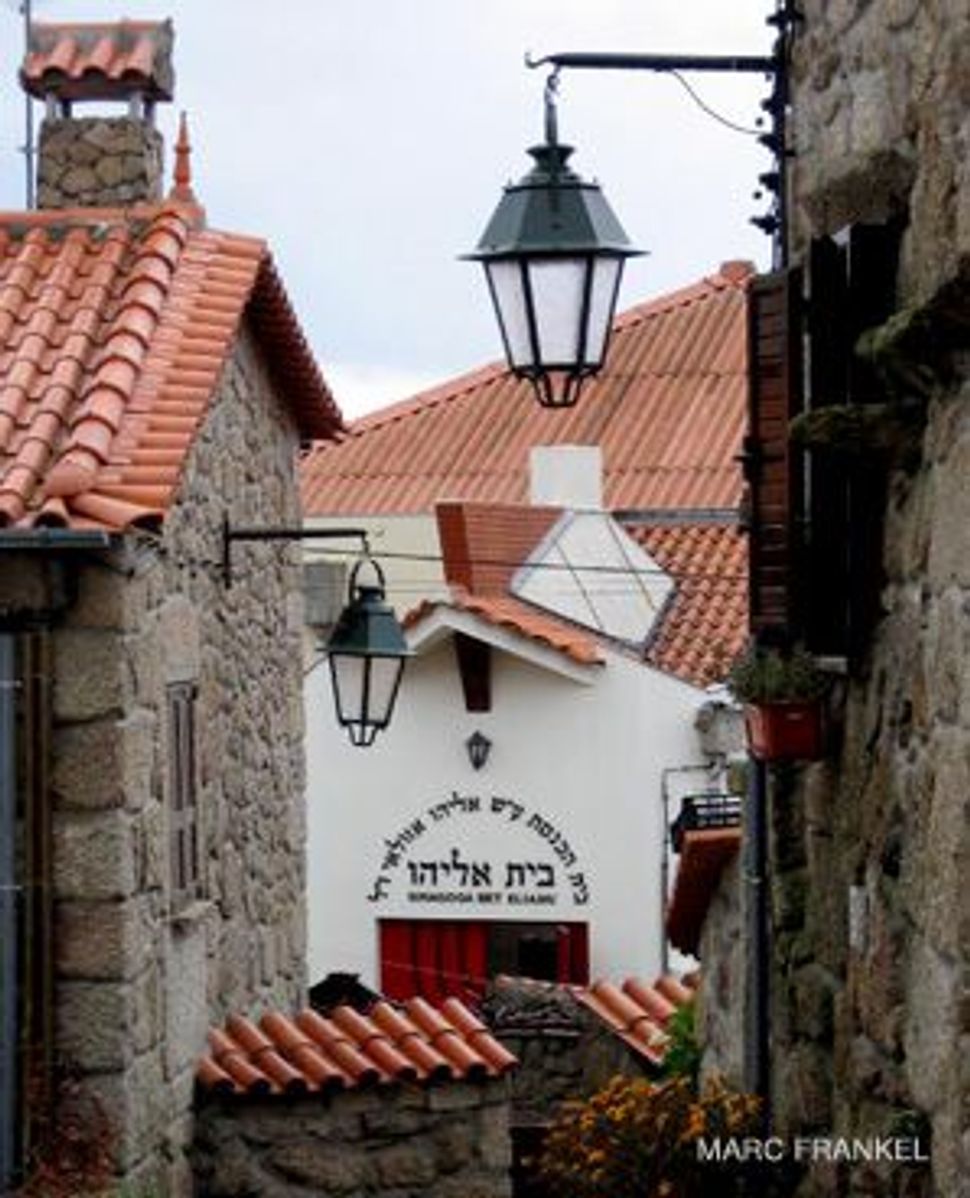 INQUISITIVE: Tourists have been flocking to the Beit Eliyahu synagogue of the long-hidden Jewish community in Belmonte Portugal

Belmonte, Portugal – While most of the towns in central Portugal are suffering through difficult economic times, this small village northeast of Lisbon is enjoying a revival: The past decade has seen the construction of a luxury hotel and a museum, and tourism is booming. 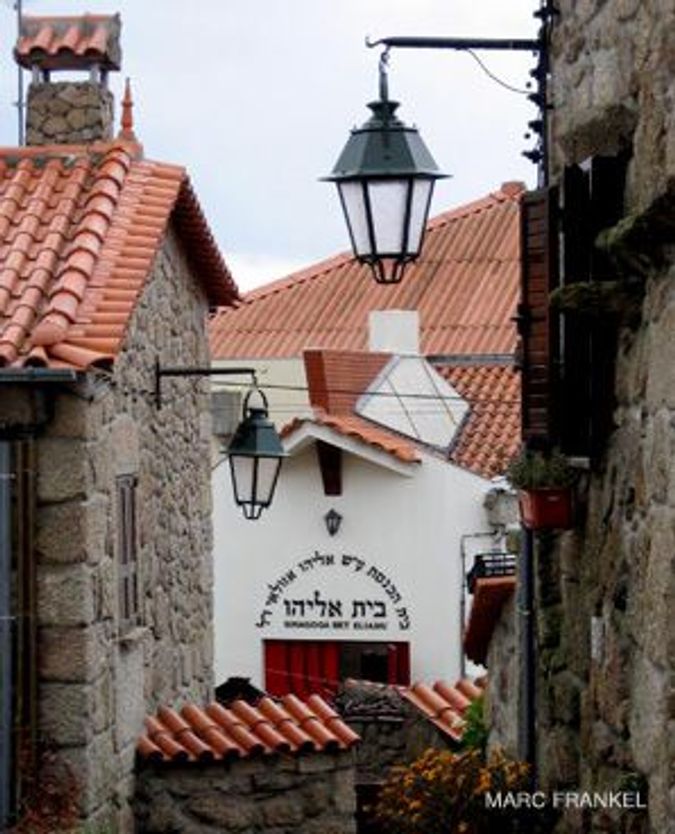 INQUISITIVE: Tourists have been flocking to the Beit Eliyahu synagogue of the long-hidden Jewish community in Belmonte Portugal

Conversos, to be exact. Belmonte, a town of 3,600, is home to some 300 descendants of Jews who survived the Inquisition by practicing their religion in secret — the only sizable community of these “secret Jews” to remain on the Iberian Peninsula. Until the 1990s, the Belmonte conversos kept their history to themselves. But since warily emerging from secrecy, the Jews here have generated a small local economy in one of the most economically depressed regions of Western Europe — one that is benefiting Jew and non-Jew alike.

“We are so happy to have work,” said Ana Maria Monteirineho, who, along with fellow Catholic Maria de Coneceição Mendes, found new employment with a sewing collective that opened in 2004 in the town center. One of the collective’s tasks is embroidering “shalom” onto lavender sachets to be sold at the new Jewish Museum. “[The tourists] come for the museum,” she said. “They come to see the Jews.”

Indeed, companies that specialize in Jewish tourism are noting that Belmonte is an easy sell. For starters, interest in Jewish Portugal in general has been growing. Functioning synagogues in Lisbon and Porto that mostly serve Eastern European immigrants are seeing more visitors. And last year, a Roman Catholic priest in Porto knocked down a false wall to find vestiges of a pre-Inquisition synagogue while renovating his home. But Belmonte is special. It seems to offer more than Lisbon and Toledo, both of which are full of Jewish history but empty of actual Jews, not to mention that a discovery of another community of crypto-Jews is unlikely to happen anywhere else, ever again.

Distinctive Belmonte has attracted international funds, including enough from one French donor to build the small but magnificent synagogue in 1997. And then there is the large Jewish Museum, which has seen more than 14,000 visitors since its opening in 2005. The museum guestbook shows that Portuguese, Israeli and American tourists are the most common, but there have also been visitors from places as far away as Mozambique, Montenegro and Japan.

“Kippah for men, none for women,” Henriques explains as people walk in.

Henriques’s aunt, Ana Marão, 72, sews Stars of David on the challah covers and tablecloths that she crochets for a living. “Now, the symbol is fine, but earlier…” Marão said as she drew her hand across her throat.

It was this fear that kept Marão’s ancestors from practicing their Judaism. Sephardic Jews are thought to have inhabited Portugal since 10 BCE. The earliest relic of Jewish life in Belmonte is an inscribed granite reliquary dated to 1297 from the town’s first synagogue. But in 1497, King Manuel I ordered Portuguese Jews to convert to Catholicism or flee. Many Jews opted to maintain their religion in secret, leading to such rituals as submerging Sabbath candles in clay jars, according to local historian David Canelo.

Even after the Inquisition officially ended in 1821, local Jews kept their rites secret.

“It was a matter of tradition,” said University of California, Los Angeles’s Eduardo Mayone Dias, professor emeritus, who has written about Belmonte. “That had been their only method of survival. The fear of Inquisition and of outside influence was very real.”

This finally began to change in 1994, when a representative from the converso community invited a rabbi from Israel to officially convert a group in Belmonte. They emerged from secrecy partly because of increased openness across Portugal after the 1974 bloodless transition to democracy from António Salazar’s dictatorship, and partly because they desired contact with other Jewish communities. In addition, footage of conversos in Belmonte in a French documentary called “The Last Marranos,” released in 1990, heralded the first wave of tourists.

The broader success that the tourists have brought is evident: Where other towns in rural Portugal are plagued with empty lots, Belmonte is ringed with a crop of new houses, and construction is still under way. The streets are clean, and the town park, lined with miniature orange trees, is well groomed.

“People want to come because this is the only really Jewish part of Portugal,” said Cristina Brito, director of Lisbon-based Mourisca Tours. Brito’s company is one of a number that have sprung up to meet the demand for organized trips to visit Belmonte. One brochure urges visitors to try “Inquisition-defeating sausage,” a local recipe in which chicken is substituted for pork.

This is a stark change from 500 years of secrecy, and not all local Jews enjoy being the object of scrutiny. Visitors trying to enter the synagogue during services are often redirected to the museum. Indeed, a number of Jewish families steer clear of both the synagogue and the tourist industry, practicing the way their ancestors did, with women leading ceremonies at home. Belmonte has seen a cycle of rabbis from Israel and Brazil, none of whom stays for more than a few years. Some attribute this to the difficulty of reconciling modern Jewish practices with those of Belmonte, developed in isolation for centuries.

“I am one of the only Jews who invites strangers into my home,” said Marão, whose family was among the first to convert. “They are still afraid. I don’t know what of.”

After 500 Years in Hiding, Jews Bring Prosperity to Iberian Town