Hold the Presses: Newspapers Are Competing for Orthodox Readers 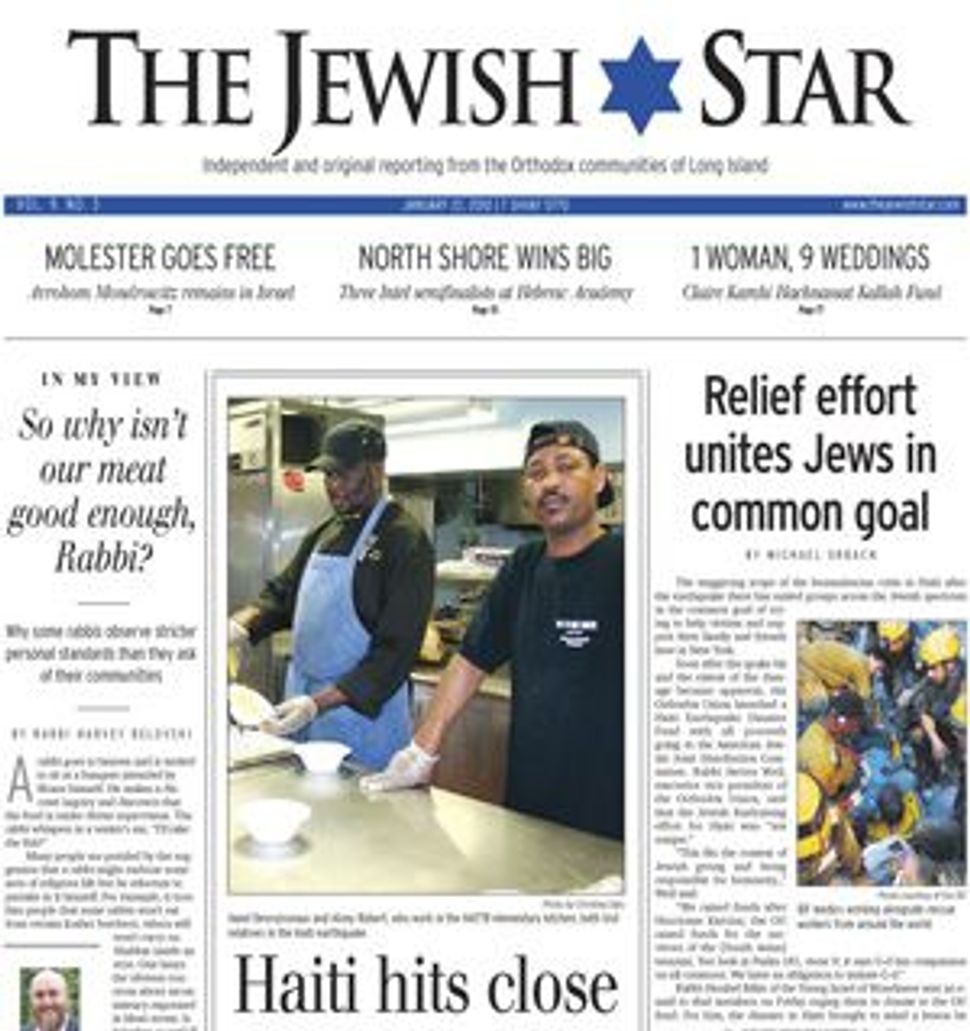 Hitting the Big Time: Even as other papers are scaling back, The Jewish Star is expanding in a bid to grab more readers.

The newspaper business has been in a tailspin for a long time now — everywhere, it seems, except among Orthodox Jews. 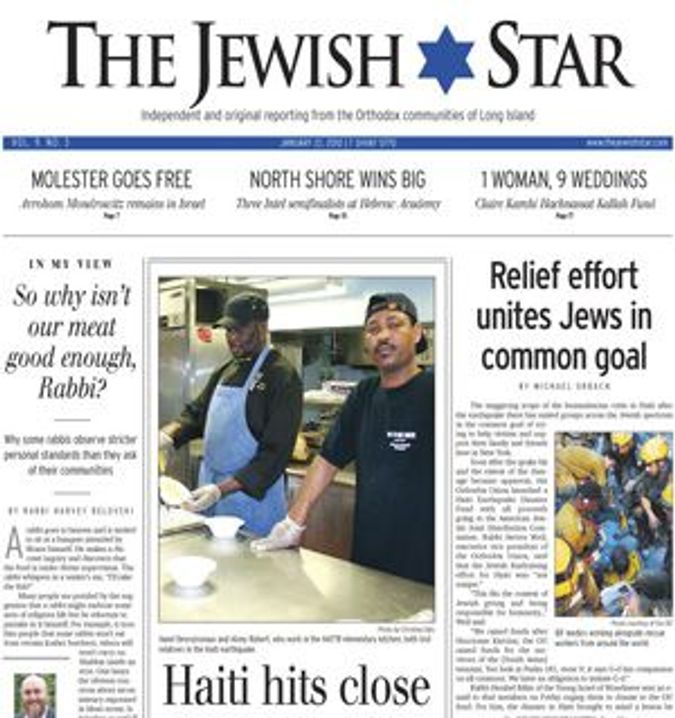 Hitting the Big Time: Even as other papers are scaling back, The Jewish Star is expanding in a bid to grab more readers.

The staying power of the Orthodox press can, of course, be reduced to one simple reason: the Sabbath.

“On Shabbes there is no Internet, no BlackBerry, no electronics, and people have time,” said Yitzchok Saftlas, president of Bottom Line Marketing, a public relations firm that targets the Jewish community.

Now, even as many secular papers are retrenching, one small Orthodox Long Island weekly, The Jewish Star, is expanding. In a bid to grab a bigger share of the Orthodox newspaper-reading public, it is venturing into the urban turf of its counterparts in New York City.

There are already at least three English-language newspapers with strong presences in the Orthodox communities of the greater New York area — all of which are also distributed nationally. The weekly Yated Ne’eman was started in the late 1980s, and the daily English version of the Israeli newspaper Hamodia was founded in 1997. Both cater largely to ultra-Orthodox, or Haredi, readers.

It’s The Jewish Press, however, with a weekly circulation of nearly 50,000 copies, that is still the leader. Founded in the 1960s, the Orthodox tabloid has always been “representative of Brooklyn Jewry both in terms of its religious values and its social values,” said Jeffrey Gurock, a Yeshiva University historian and the author of the 2009 book from Indiana University Press, “Orthodox Jews in America.” For many years, the paper was a platform for Rabbi Meir Kahane, founder of the radical Jewish Defense League.

The Jewish Press, according to observers, expresses unabashedly right-wing political views and features an unapologetic presentation of Orthodoxy, with content that is heavy on features and opinion columns. But while Hamodia and Yated Ne’eman are both extremely religiously conservative — no photos of women appear in either paper — The Jewish Press has the greatest claim on the more religiously centrist Orthodox populations in the greater New York area.

The Jewish Star, founded in 2002 and until this month serving only the Orthodox community of Nassau County’s Five Towns, has a circulation of no more than 10,000 copies. But starting next month, according to Mayer Fertig, the paper’s publisher and editor, it will expand into New York City’s five boroughs, with street-side news boxes and distribution in synagogues and stores from the Flatbush section of Brooklyn to Manhattan’s Upper West Side. Fertig did not want to give the exact number that will be distributed for free in New York City but said it would be “in the low thousands.”

Fertig also declined to speak directly about potential competition with The Jewish Press, and representatives of The Jewish Press did not respond to calls seeking comment. But the way Fertig talks about his paper suggests that he thinks there is an audience whose needs the other papers aren’t meeting.

“There really aren’t that many frum papers, certainly not one that can be appreciated by somebody who is a little more modern or better-educated who is looking for something that is a little more thought provoking,” Fertig said, using a Yiddish word that roughly means “religious.”

Fertig, 39, comes to the Orthodox newspaper business following a long career in the secular media world, most recently as the managing editor of New York’s WCBS radio. Under his stewardship, The Jewish Star has stressed news reportage, with attempts at muckraking and a writing style that aims for a degree of objectivity.

The paper has not shied away, for example, from reporting on the child sex-abuse scandals that have riled the Orthodox world. Its most recent issue had stories on the Israeli Supreme Court’s decision not to extradite accused child molester Avrohom Mondrowitz and the sex scandal involving Rabbi Leib Tropper, the founder of Eternal Jewish Family, an organization advocating strict conversion standards.

“They are willing to tackle controversial stories that most Orthodox papers won’t touch, or if they do touch it, they do so with a preconceived conclusion,” said Shmarya Rosenberg, whose blog, Failed Messiah, offers a consistently critical take on the Orthodox community.

Rosenberg sees The Jewish Star’s planned expansion as a sign “that there are Orthodox Jews in increasing numbers who realize that the papers they usually read are just full of spin and advertising cloaked as news. And they want to know what the truth is.”

The entry of the suburban Orthodox weekly into New York City’s Jewish media market comes as the center of gravity for centrist and Modern Orthodoxy has shifted to the suburbs. Brooklyn’s Orthodox neighborhoods have become increasingly Haredi, while Long Island’s Five Towns, long home to a religiously diverse mix of Jews, have evolved in recent decades into a Modern Orthodox stronghold. In comparison to Brooklyn, many of the suburban Orthodox enclaves are less rigidly right wing in their ideology and feature a more open atmosphere, said Yeshiva University’s Gurock.

Fertig, however, said that his paper is trying to reach out to a wide variety of Orthodox readers.

“I don’t think of this primarily as a Modern Orthodox paper,” said Fertig. “I like to think of it as an Orthodox paper that just shoots down the middle, and there’s something in it for anybody who wants to get something out of it.”

Elie Rosenfeld, CEO of Joseph Jacobs Advertising, which specializes in communications and marketing to Jewish consumers, has placed ads in all of these Orthodox papers. He said that the arrival of The Jewish Star reflects a shift in the Orthodox world.

“Outside of the Hasidic world, there is no one center of Orthodoxy, even here in New York,” Rosenfeld said, “So you no longer need the credibility of being from Brooklyn to be a legitimate part of the Orthodox market and scene. And this, actually, is what’s creating a new level of competitiveness.”

Hold the Presses: Newspapers Are Competing for Orthodox Readers