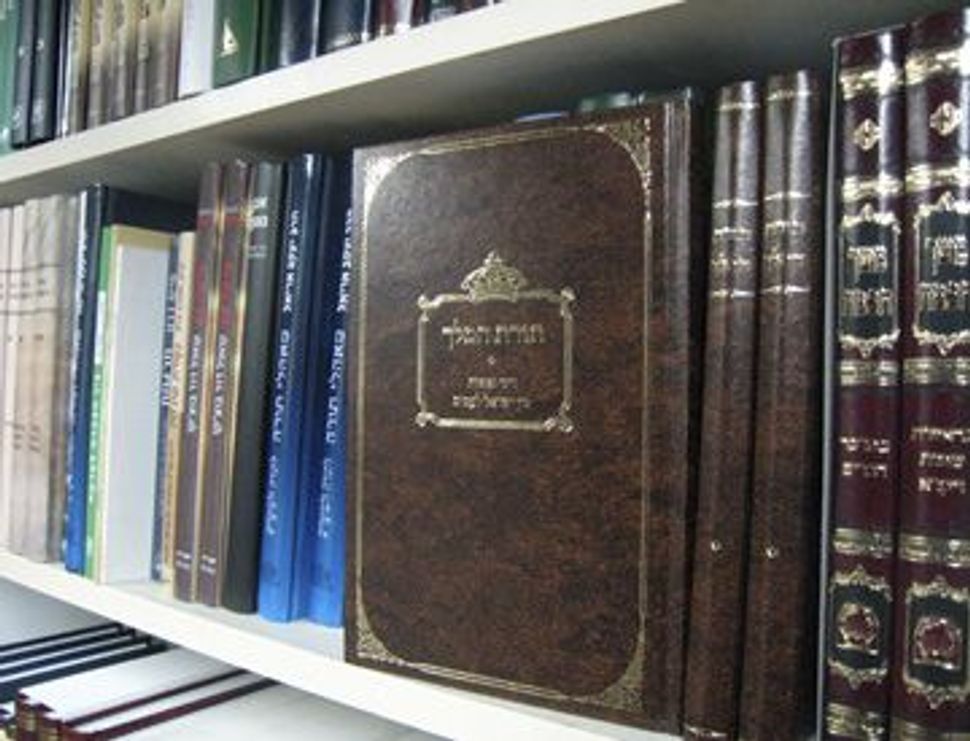 On the Shelf: The Pomeranz Bookseller in Jerusalem is among the bookstores that are selling copies of ?The King?s Torah.? Image by DANIEL ESTRIN

The marble-patterned, hardcover book embossed with gold Hebrew letters looks like any other religious commentary you’d find in an Orthodox Judaica bookstore — but reads like a rabbinic instruction manual outlining acceptable scenarios for killing non-Jewish babies, children and adults. 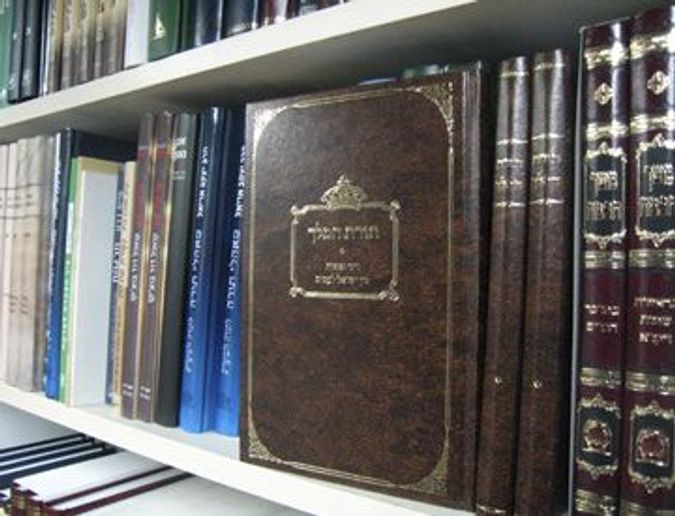 On the Shelf: The Pomeranz Bookseller in Jerusalem is among the bookstores that are selling copies of ?The King?s Torah.? Image by DANIEL ESTRIN

“The prohibition ‘Thou Shalt Not Murder’” applies only “to a Jew who kills a Jew,” write Rabbis Yitzhak Shapira and Yosef Elitzur of the West Bank settlement of Yitzhar. Non-Jews are “uncompassionate by nature” and attacks on them “curb their evil inclination,” while babies and children of Israel’s enemies may be killed since “it is clear that they will grow to harm us.”

“The King’s Torah (Torat Hamelech), Part One: Laws of Life and Death between Israel and the Nations,” a 230-page compendium of Halacha, or Jewish religious law, published by the Od Yosef Chai yeshiva in Yitzhar, garnered a front-page exposé in the Israeli tabloid Ma’ariv, which called it the stuff of “Jewish terror.”

Now, the yeshiva is in the news again, with a January 18 raid on Yitzhar by more than 100 Israeli security officials who forcibly entered Od Yosef Chai and arrested 10 Jewish settlers. The Shin Bet, Israel’s domestic security agency, suspects five of those arrested were involved in the torching and vandalizing of a Palestinian mosque last month in the neighboring Palestinian village of Yasuf. The arson provoked an international outcry and condemnation by Israeli religious figures, including Ashkenazi Chief Rabbi Yona Metzger, who visited the village to personally voice his regret.

Yet, both Metzger and his Sephardic counterpart, Chief Rabbi Shlomo Amar, have declined to comment on the book, which debuted in November, while other prominent rabbis have endorsed it — among them, the son of Rabbi Ovadia Yosef, Sephardic Jewry’s preeminent leader. Also, despite the precedent set by previous Israeli attorneys general in the last decade and a half to file criminal charges against settler rabbis who publish commentaries supporting violence against non-Jews, Attorney General Menachem Mazuz has so far remained mum about “The King’s Torah.”

“Sometimes the public arena deals with the phenomenon and things become settled by themselves,” Justice Ministry spokesman Moshe Cohen told the Forward.

A coalition of religious Zionist groups, the “Twelfth of Heshvan,”—– named after the Hebrew date of Prime Minister Yitzhak Rabin’s assassination, has asked Israel’s Supreme Court to order Mazuz to confiscate the books and arrest its authors.

“You open the book, and you feel that you read a halachic book. And it’s a trap,” said Gadi Gvaryahu, a religious Jewish educator who heads the coalition. It was, in fact, “a guidebook [on] how to kill,” he charged.

Family members who answered phone calls placed to the homes of both authors said they did not wish to comment.

In 2008, author Shapira was suspected of involvement in a crude rocket attack directed at a Palestinian village. Israeli police investigated but made no arrests.

Co-author Elitzur wrote an article in a religious bulletin a month after the book’s release saying that “the Jews will win with violence against the Arabs.”

In 2003, the head of the Od Yosef Chai yeshiva, Rabbi Yitzchak Ginsburgh, was charged by then-Attorney General Elyakim Rubinstein with incitement to racism for authoring a book calling Arabs a “cancer.”

In 2006-2007, the Israeli Ministry of Education gave about a quarter of a million dollars to the yeshiva, and in 2007-2008 the yeshiva received about $28,000 from the American nonprofit Central Fund of Israel.

“The King’s Torah” reflects a fringe viewpoint held by a minority of rabbis in the West Bank, said Avinoam Rosenak, a Hebrew University professor specializing in settler theology. Asher Cohen, a Bar Ilan University political science professor, thought its influence would be “zero” because it appeals only to extreme ideologues.

But the book’s wide dissemination and the enthusiastic endorsements of prominent rabbis have spotlighted what might have otherwise remained an isolated commentary.

At the entrance to Moriah, a large Jewish bookstore steps from the Western Wall, copies of “The King’s Torah” were displayed with children’s books and other halachic commentaries. The store manager, who identified himself only as Motti, said the tome has sold “excellently.”

Other stores carrying the book include Robinson Books, a well-known, mostly secular bookshop in a hip Tel Aviv shopping district; Pomeranz Bookseller, a major Jewish book emporium near the Ben Yehuda mall in downtown Jerusalem; and Felhendler, a Judaica store on the main artery of secular Rehovot, home of the Weizmann Institute.

The yeshiva declined to comment on publication statistics. But Itzik, a Tel Aviv-area book distributor hired by the yeshiva who declined to give his last name because of the book’s nature, said the yeshiva had sold 1,000 copies to individuals and bookstores countrywide. He said an additional 1,000 copies were now being printed.

Mendy Feldheim, owner of Feldheim Publishers, Israel’s largest Judaica publishing house, said he considered this a “nice” sales figure for a tome of rabbinic Halacha in Israel. He said his own company, which distributes to 200 bookstores nationwide, is not distributing “The King’s Torah” because the book’s publishers did not approach the company.

Prominent religious figures wrote letters of endorsement that preface the book. Rabbi Yaakov Yosef, son of former Sephardic Chief Rabbi Ovadia Yosef, blessed the authors and wrote that many “disciples of Torah are unfamiliar with these laws.” The elder Yosef has not commented on his son’s statement.

Dov Lior, chief rabbi of Kiryat Arba and a respected figure among many mainstream religious Zionists, noted that the book is “very relevant especially in this time.”

Rabbi Zalman Nechemia Goldberg, one of the country’s most respected rabbinic commentators, initially endorsed the book, but rescinded his approval a month after its release, saying that the book includes statements that “have no place in human intelligence.”

A handful of settler rabbis echoed Goldberg’s censure, including Shlomo Aviner, chief rabbi of Beit El and head of Yeshivat Ateret Yerushalayim, who said he had “no patience” to read the book, and spoke out against it to his students.

Previously, Israel has arrested settler rabbis who publish commentaries supporting the killing of non-Jews. In addition to Ginsburgh, the Od Yosef Chai yeshiva head, in 1994, the government jailed Rabbi Ido Elba of Hebron for writing a 26-page article proclaiming it a “mitzva to kill every non-Jew from the nation that is fighting the Jew, even women and children.”

“The atmosphere has changed,” said Yair Sheleg, senior researcher at the Israel Democracy Institute, who specializes in issues of religion and state. Previous governments took a tougher stance against such publications, he said, but “paradoxically, because the tension between the general settler population and the Israeli judicial system…is high now, the attorney general is careful not to heighten the tension.”

It is not uncommon for some settler rabbis, in the unique conditions of West Bank settlement life, to issue religious decrees, or psakim, that diverge from normative Jewish practice. In 2008, Avi Gisser, considered a moderate rabbi from the settlement of Ofra, ruled that Jews may violate Sabbath laws and hire non-Jews to build hilltop settlements. And In 2002, Yediot Aharanot reported that former Israeli Chief Rabbi Mordechai Eliyahu sanctioned Jewish harvesting of Palestinian-owned olive trees.