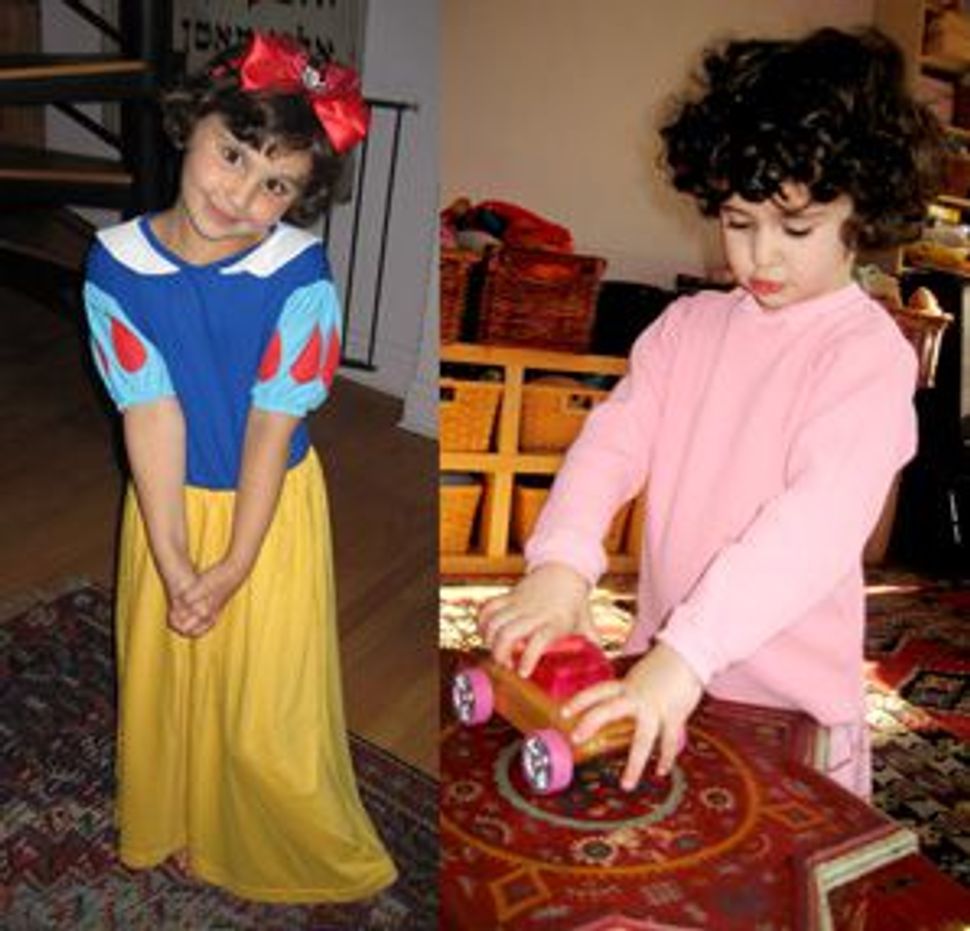 When Josie was 2, I wrote a column about my bafflement at her girly-girlness. How could I, a person unburdened by mascara or a blowdryer, have spawned someone who so loved nail polish, frills and Hello Kitty hair accessories? At the time, I expressed shock. Today, older, wiser, and most importantly, the mother of two girls instead of one, I have more insight into Josie’s condition. (Call it Polyprincesstic Ovary Syndrome.) 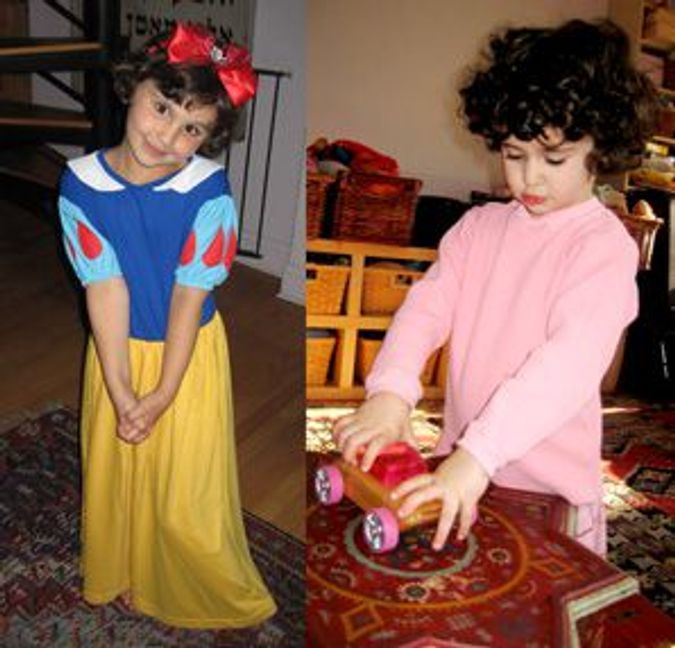 At 6, Josie’s favorite color is still pink; she’s obsessed with ponies, princesses, unicorns and fairies. But Maxine, spawn of the same parents, loves trucks, trains, the subway system. Give her a book about diggers and front loaders, and she pores over it like it’s the Talmud and she’s the Vilna Ga’on.

I’ve noticed that lots of folks with only one daughter sound like, well, me, when I only had one daughter: “Golly, we have no idea how she got so girly! It’s crazy!” Alter-nately, parents of glitter-indifferent girls can sound self-righteous and self-congratulatory: “Oh, we consciously provided our daughter with toy cars and Legos to nurture her adventurous courageous spirit, thus providing the fertile soil in which a fearless gender warrior could grow! More lentil-quinoa loaf?”

Guess what? Life’s more nuanced than either of those positions. When you have two girls, you figure out fast that you can’t generalize too much about girls, or about your own role in their personhood. Most girls are in the middle of the bell curve of girliness, just as most humans are in the middle of the bell curve of everything. In reality, Josie has her butch side — she’s physically braver than Maxine, climbs higher, runs faster. Maxine is way less into fashion than her sister, and loves nothing more than repro-gramming every device in our house by pushing every button on it, but she works her flirtiness and cuteness on strangers way more than Josie ever did. So really, who’s the femme here? I think when parents talk about how girly or how tough their daughters are, they’re really creating the narratives they want to tell and ignoring evidence that doesn’t fit their hypotheses. I was tickled at the differences between toddler Josie and me, so I focused on them. But in reality, she has always been, like most kids, a mix of tough and tender. Research tends to indicate that a few outliers skew results on how boys and girls differ — there are a few boys who are super-aggressive, but for the most part, boys and girls are in a big kinda-sorta-sometimes-semi-aggressive pack.

But our culture hammers home messages, hard, about how girls are supposed to play and be. Lots of research shows that kids’ TV programs consistently reinforce gender-role and racial stereotypes. That’s why the introduction of Dora was so great — here was an adventurous, rounded little girl with bobbed hair, in a tee and shorts, setting out on her own missions, accompanied by a male sidekick. What a bummer that Nickelodeon has now introduced a Dora makeup mirror and Dora kitchen (uh, what does Dora have to do with kitchens and makeup?) as well as taller, slimmer, longer-haired doll versions of the character: Magic Hair Fairytale Princess Dora and Sparkle & Twirl Mermaid Dora (who does nothing but turn back and forth from human to mermaid, while shimmying). Apparently it’s up to Dora’s cousin Diego, spinoff star of his own show, “Go, Diego, Go,” to do all the running, leaping and animal-rescuing these days.

And when it comes to gender stereotyping, Nickelodeon has nothing on Hasbro. As National Organization for Women president Kim Gandy wrote on her blog, Hasbro recently unveiled a new slogan for Tonka trucks: “Built for Boyhood!” In a commercial for one such vehicle, a boy is shown wreaking vehicular havoc on the living room, while the voice-over says, “Let’s face it — boys are built different!” Another Hasbro brand, Playskool, proffers the Rose Petal Cottage, an appliance-filled pastel playhouse. In its commercial, a little girl’s voice sings, “I love when my laundry gets so clean! Taking care of my home is a dream, dream, dream!” (In another ad, a mom’s voice talks about how the cottage nurtures imagination, while the little girl on screen says, “Let’s do laundry!” Alas, I am not joking.)

Some evolutionary biologists insist that girls’ attraction to domesticity and pinky pinkitude is inborn. For instance, scientists at the University of Newcastle found that women tended to prefer the red end of the red-green color axis. The researchers theorized that women grew to love pink during hunter-gatherer times, when women were the primary gatherers and needed to find ripe red fruit. Men, perhaps, came to love blue because bluer water was more likely to be clean and bluer skies were better for the hunt. Uh, then why, in Victorian times, was pink the “boy” color and blue the “girl” color? (Pink was apparently considered vibrant and strong; blue was gentle and associated with the Virgin Mary.)

I’m not saying there are no brain differences between women and men. Plenty of studies indicate that there are brain-wave or brain-structure differences that can give women greater strength in language and men greater strength in spatial perception. But c’mon, biology is not destiny. We teach kids our expectations of girldom and boydom. (And parental discomfort with boys who seem too feminine will be the subject of a future column.) One study tested 18-month-old and 3-year-old toddlers about which toys are for girls and which toys are for boys. The upshot: Gender discrimination increased with age. By 3, the kids knew very well who was supposed to play with what. In another study, 18-month-old and and 2-year-old toddlers were shown identical pictures of stereotypically “masculine” or “feminine” items on computer screens, accompanied by a gender-neutral voice saying, “This is the one I like. Can you look at me?” Then one male and one female face appeared onscreen. Even the younger kids understood that, for instance, fire hats and hammers had male associations. (I think Maxie knows this, but doesn’t care.)

The problem is this: Our binary world dictates that some toys are for boys and some are for girls. Yes, there are still Legos and Lincoln Logs and Tinkertoys, but if you walk down the aisles of a non-hippie toy megastore, you’ll find rows of pink and blue separated as clearly as by a mechitza. (My hope is that the one-two punch of high-design-obsessed yuppie/Waldorf-y parents and lead paint from China will lead to more unpainted wooden toys hitting the mainstream. Hey, it could happen.)

Now even chapter books for young readers enforce the gender divide. There are gazillions of crappily written series about rainbow fairies, princess school and unicorn ad-ventures, all with glittery pastel covers. One enterprising publisher created a series called “Pony Crazed Princesses” (sic — I’m not the one who forgot that hyphen). Alas, if only it had been named “Pony Crazed Princesses Make Cupcakes For Fairies and Unicorns” they might really have had something.