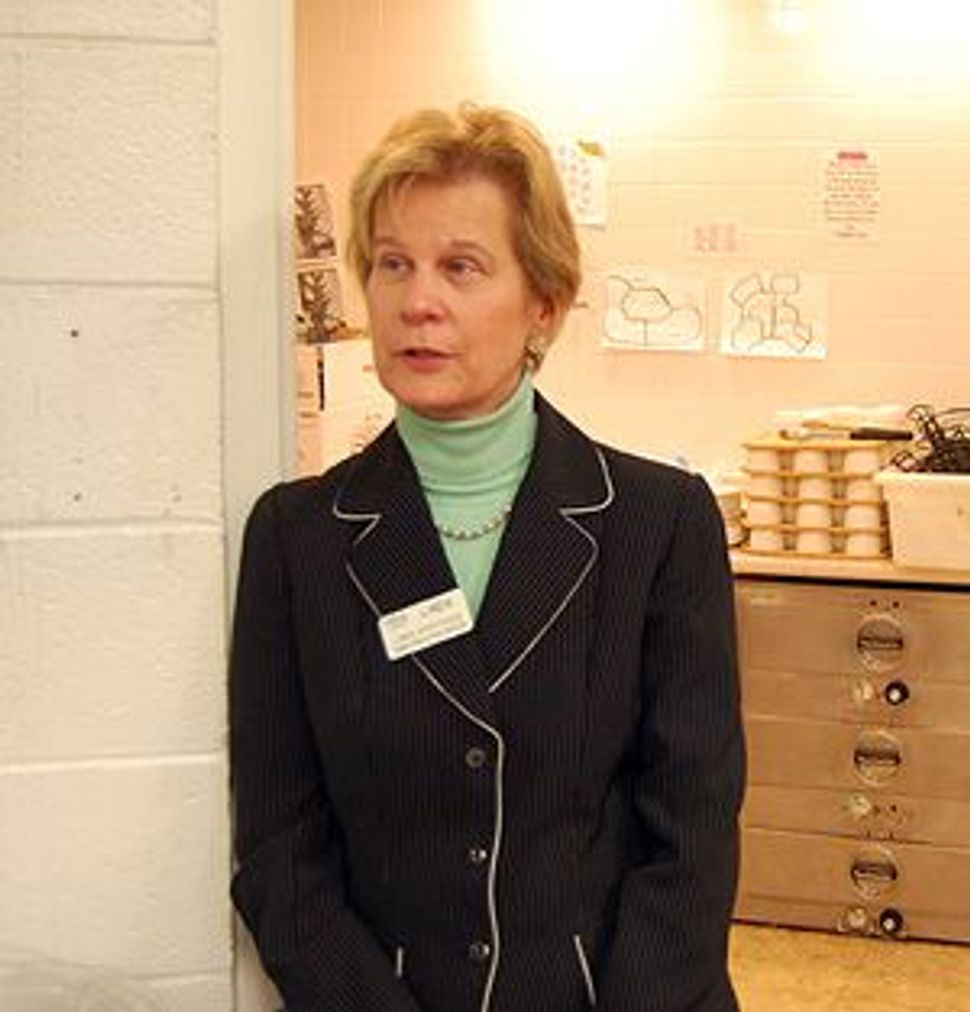 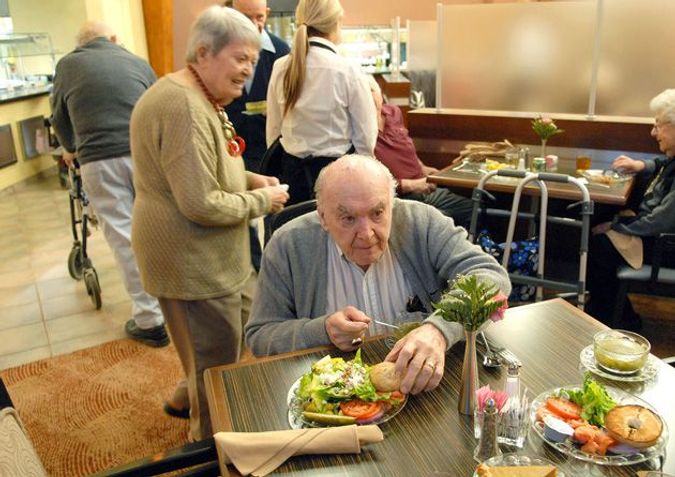 Changing With the Times: Jack Goldfarb, 87, eats dinner in the Terrace Dining Room at Martins Run in Broomall, Pa. Soon cheeseburgers will be available in the Jewish facility. Image by PETER TOBIA

Kosher food makes a Jewish home. That has been the thinking for the past 29 years at Martins Run, a Jewish retirement community outside Philadelphia where every meal served in the white-tablecloth dining rooms has been certified kosher.

But the thinking about what makes a Jewish home is changing. During the past year, Martins Run, along with a number of other Jewish senior assisted-living facilities, has begun moving away from strictly kosher offerings — in some cases, doing away with kosher food altogether. At Martins Run, the board voted to convert one of the two dining halls to start serving non-kosher food, a move that was made after occupancy rates began to drop and prospective Jewish clients said that they were turned off by the kosher-only meal plan. 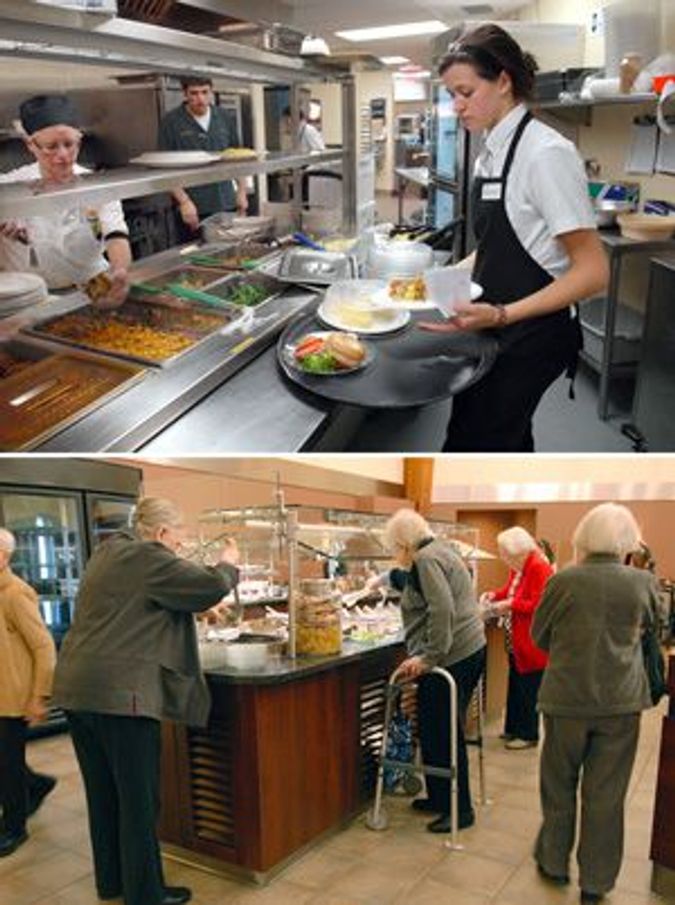 “Let’s face it, it’s a big business, and you have to keep ahead of it in order to stay alive,” said the head of the Martins Run residents food committee, Vivian Feltzer, 90, who is excited about the opportunity to eat bacon and shrimp. “We may be older, but I know we have to stay with the times.”

This sort of thinking has affected Jewish nursing homes and assisted-living facilities over the past year in places as far removed as Boston, Philadelphia, San Francisco and Atlanta. The shift has two sources. One is the intense financial pressure and competition in the business of caring for the elderly, which has led administrators to scour their budgets for cost-cutting possibilities. But the decision to do away with kosher food has also been championed frequently by elderly Jewish residents themselves, who want to eat whatever they want in their old age.

It’s not a surprising turn of events, given that only a small minority of American Jews keep kosher in their homes. But the changes at nursing homes — the only homes many elderly Jews know — represent a move away from long-held communal norms, and they leave some wondering what the kosher-keeping Jews of today will do when they are older.

“What’s going to be there for the people my age?” said 60-year old Alan Zaitchek, whose father, an Orthodox rabbi, lives in an assisted-living facility near Boston that recently announced it would be closing its kosher kitchen because of economic considerations.

“There are no institutions that are going to be around when we need them,” Zaitchek said.

At Chestnut Park at Cleveland Circle, where Zaitchek’s father lives, the administration is looking at bringing in fresh-cooked meals from another kosher facility nearby — at an additional charge to the residents who want it. Chestnut Park’s decision follows closely that of a nursing home nearby to cut its kosher service. In Philadelphia, the Glendale Uptown Home recently did away with its kosher kitchen and started serving cheeseburgers. There are still Yiddish chat sessions and visits from Chabad rabbis at Glendale Uptown, but the residents who want kosher food are left to eat frozen microwaveable meals. 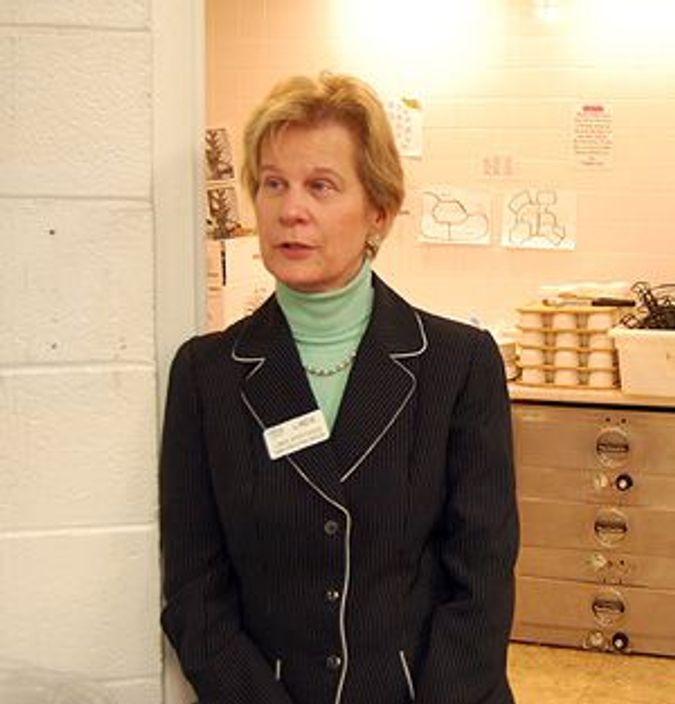 There are, to be sure, still many nursing homes around the country with kosher kitchens. The head of the Association of Jewish Aging Services of North America, Harvey Tillipman, said that a majority of the 115 members of his organization — all of them not-for-profits — still serve kosher food.

“There’s a lot of pull in the Jewish community with people wanting to maintain this kosher tradition,” Tillipman said. But, he added, “when each of the member facilities is trying to find ways to reduce costs, one of the things that comes up repeatedly is kosher food,” which generally costs more.

The facilities that have done away with kosher food altogether have largely been for-profit facilities, like Chestnut Park and Glendale Uptown, which are answerable to shareholders rather than to the Jewish community. Some Jewish facilities were started as not-for-profits by communal organizations and were later bought out by big for-profit conglomerates.

Even among the remaining Jewish not-for-profit facilities, though, the financial pressures have been mounting as the federal programs on which they rely — such as Medicaid and Medicare — have cut back their reimbursement rates for nursing homes.

In San Francisco, Daniel Ruth, CEO of the 138-year old Jewish Home, says that kosher food adds about 2% to 3% to his facility’s $65 million budget, and during lean years that extra budget line always comes up for discussion. Thus far the home has maintained its kosher kitchen, but when Ruth’s organization recently opened up a new Jewish independent-living facility in nearby Palo Alto, the board decided to create a quasi-kosher kitchen in which residents could add cheese to their hamburgers and milk to their coffee — even after a steak dinner. Ruth found that the bank providing the loan wanted them to do this to ensure financial viability.

“I think it’s really now, in the last year or two — and really going forward — that Jewish communities are going to be making this kind of change,” Ruth said.

The timing of these shifts is somewhat curious, given that kosher-keeping Jews have long been a minority in the United States. In fact, the 2001 National Jewish Population Survey indicated that today’s elderly are actually slightly less likely to keep kosher than younger Jews. While 19% of Jews aged 55–64 said that they kept kosher at home, the number rose slightly to 20% for ages 45–54, and to 22% for ages 35–44. This is consistent with the growth of Orthodox Judaism in America, the main wing of Judaism that insists on kosher food.

Nursing home experts say that historically, despite the fact that a majority of Jews did not keep kosher, kosher food was seen as a communal responsibility at Jewish homes, many of which were set up by Jewish charities.

“The assumption was always there that this was a norm that everyone would adhere to,” said Alan Glicksman, a sociologist at the Philadelphia Corporation for Aging.

Sadie Hofstein, 86, president of Martins Run’s residents association, said that when she moved in eight years ago, she had not kept kosher in her own home, but she figured that the restricted menu was the price of living in a Jewish environment.

“You came here, and the expectation was that it’s going to be kosher,” Hofstein said. “There never was a thought of a non-kosher kitchen, and people simply fell into it.”

Glicksman said that communal norms have been breaking down as the avenues of Jewish identity have increased and competition has made the customer king — even in the world of senior living.

“There are more diverse assumptions about what being Jewish means,” Glicksman said. “Kosher food is a window into this whole complex topic of what makes Jewish health and social services Jewish.”

The competition has become fiercer, in part because older Jews have been willing to move into non-Jewish facilities and non-Jews have moved into Jewish homes. This has spawned all sorts of creative responses. In Georgia, the Cohen Home has stopped ordering kosher meat but has kept out inherently treyf foods, like pork and shellfish. In, Boston, the newly opened community NewBridge on the Charles will supplement its kosher offerings with a nonkosher restaurant that will avoid pork but offer up shellfish.

The arrival of non-kosher dining options provides more than just gustatory benefits for residents who, like Feltzer, are thrilled about the change. Paasche-Orlow said that patients at nursing homes today are generally older and more frail than they were in the past, and as a result they have more exacting dietary needs.

“They are definitely more concerned now about just eating what makes them feel okay,” Paasche-Orlow said of the residents with whom she deals. “They don’t want to worry about the timing of eating ice cream.”

This does not mean that the decision to drop kosher food — or even to add non-kosher options, as did Hebrew Senior Life and Martins Run — does not run into deeply felt resistance. All the homes making these decisions talk about emotional debates among their board members. In Atlanta, when a for-profit nursing home next to a synagogue announced that it was doing away with a kosher kitchen in 2008, the rabbi at the synagogue led a group of investors that tried to buy the home and keep it kosher. In the end, a local Christian group bought the home and maintained the kosher kitchen.

An often repeated fear is that the end of kosher food will lead to the end of the broader Jewish environment at these nursing homes. In Boston, Zaitchek wrote to people worried about the changes at Chestnut Park.

The management at Chestnut Park has assured residents that they will maintain a Jewish environment, including “kosher-style” meals that won’t mix milk and meat or include pork or shellfish. At Martins Run, even the decision to add non-kosher options while maintaining a kosher dining room was almost too difficult to talk about.

“It was hard for people to even approach this as a conversation for a long time,” said Linda Sterthous, CEO of Martins Run.

But two years back, Martins Run did a survey and found that close to 90% of prospective clients wanted non-kosher food. “Once we had some solid quantitative evidence, it’s hard to look away from,” said Sterthous. “We were finding that many of our key target population prospects were leaving us and saying, ‘Nice place, great environment, but I’m going to go to the place down the street because I can eat whatever I want.’”