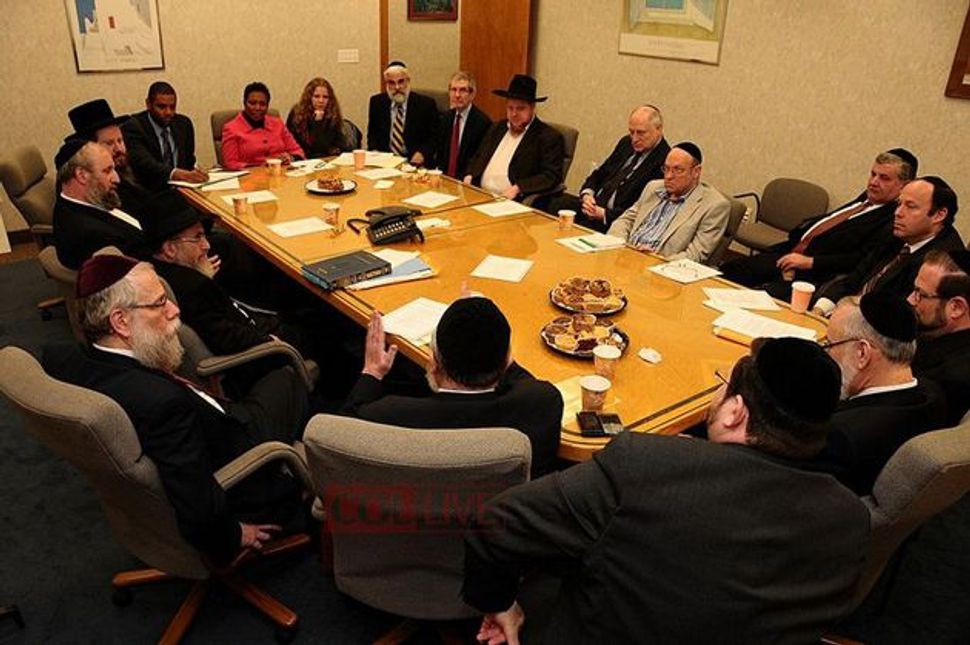 Gentle Persuasion: A delegation of Orthodox constituents and other Jewish leaders met with Rep. Yvette Clarke (D-Brooklyn) Feb. 1 and convinced her to renounce her support for a congressional letter calling on President Obama to press Israel to ease its blockade of civilian goods and raw materials moving in and out of Gaza.

In the strongest sign so far of pushback against dovish Jewish groups, a New York congresswoman representing an ultra-Orthodox constituency retracted her support from congressional initiatives meant to ease the pressure on Palestinians in Gaza.

Yvette Clarke, of New York’s 11th District, which covers large parts of Brooklyn, met February 1 with a group of local Jewish leaders, many ultra-Orthodox, to discuss their concerns about her decision to sign on to two congressional letters dealing with the plight of Palestinians in Gaza. One letter called for lifting travel restrictions on Palestinian students, and the other for easing the Israeli blockade on Gaza.

The Jewish leaders’ intervention produced an open letter to Clarke’s Jewish constituents in which she expressed her regret for supporting the congressional letters. “Unfortunately, these letters are uneven in their application of pressure and do not sufficiently present a balanced approach/path to peace,” Clarke wrote, adding that the letters have “a provocative and reactionary impact.”

A spokesman for Agudath Israel of America said that Jewish participants in the meeting with Clarke responded to her new letter with “cautious optimism” and expressed their hope that her future stance on the Middle East “will reflect the support for Israel she is voicing now.”

Dovish Jewish groups supported the congressional letters on Gaza, and while mainstream pro-Israel organizations were not supportive of them, they did not actively lobby against them.

Hadar Susskind, director of policy and strategy at J Street, a group that advocated in favor of the letters, said he understood Clarke’s wish “to balance her needs with the needs of her constituency,” but he called on the Jewish community to break with “the zero-sum game and understand that improving the situation in Gaza will help us all reach a solution.”

Clarke’s retraction of her support for the Gaza letters echoes similar pressure put on lawmakers in the run-up to J Street’s first national conference, in October 2009. Then, too, some members of Congress from strongly Jewish districts came under constituent pressure to withdraw from a list of sponsors for the event.