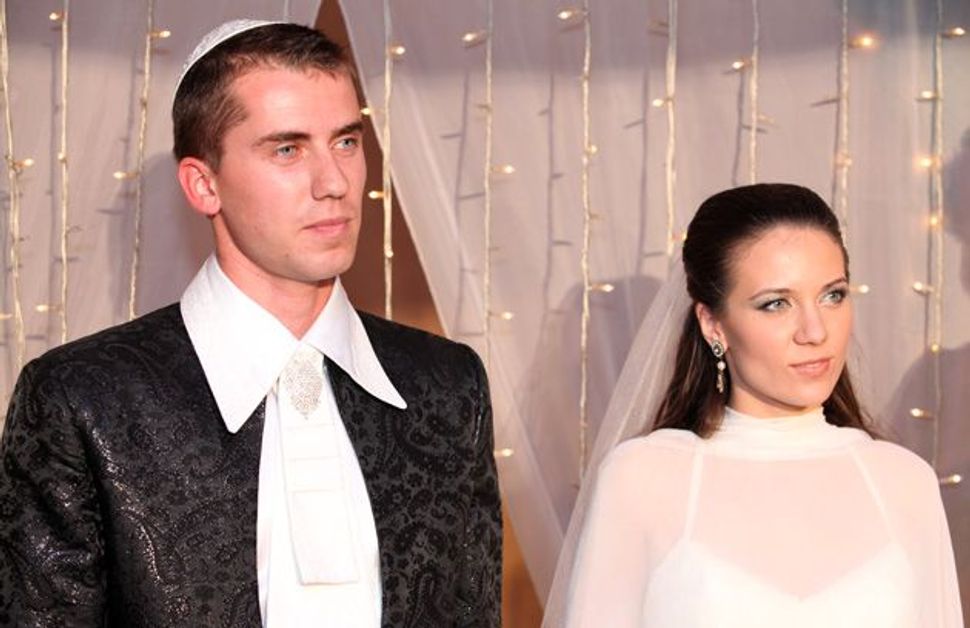 Where to Wed? Maxim and Alina Serjukov had to register their intention to marry in the village of Beer Tuvia after the top rabbi in their hometown of Ashkelon rejected her conversion. Image by COURTESY OF MAXIM AND ALINA SERJUKOV

In Tel Aviv, where she works, Alina Serjukov is Jewish. In Ashkelon, where she lives, she’s considered a gentile.

Alina discovered her strange predicament in the run-up to her January 14 wedding, when she and her husband attempted to register their upcoming marriage with the local rabbinate. But the official rabbi in Ashkelon refused to accept that she is Jewish, even though a regional rabbinic court, part of a network of such courts headed by Sephardic Chief Rabbi Shlomo Amar, had written to confirm that she had a valid conversion to Judaism and should be considered Jewish.

“My wife is Jewish in every place except for in Ashkelon — in the army, in the Chief Rabbinate and in the rest of Israel, just not in Ashkelon,” he told the Forward.

Seth Farber, an Orthodox rabbi who runs ITIM, a nonprofit that assists people whose conversions are called in to question, said he has been in contact with a dozen individuals in various locations who converted to Judaism via channels approved by the Chief Rabbinate but who have come up against local rabbis who reject their conversions.

In response, the Chief Rabbinate is now taking the unusual step of trying to effectively sideline local rabbinates that reject conversions by making it known that rabbinates from nearby locales are free to set up their own offices in such jurisdictions.

Advocates for converts are outraged by the situation.

“If we don’t accept our own conversions, we’re really a banana republic,” Farber said. “It’s like being given a driving license in Jerusalem and then being stopped in Tel Aviv and told that your license isn’t valid.”

The Serjukovs, both 24 and former high school sweethearts, moved with their respective families to Ashkelon when they were each 7. He came from Latvia, she from Russia. Because Alina’s mother is not Jewish, Alina signed up during her army service for a conversion course run by the Israel Defense Forces and accredited by the state’s Orthodox-run Conversion Authority. When the nine-month process was completed, Alina assumed that her Jewishness would never be questioned, her husband said.

That certainty vanished in November when she went to her local rabbinate in Ashkelon to register their intention to marry. This is standard practice, as all marriages between Jews in Israel must be solemnized by an Orthodox rabbi, and local rabbinates require registration so that they can prepare the paperwork.

The visit did not go according to plan. The marriage registrar and the town’s official rabbi, Yosef Chaim Blau, told the Forward that he refused to accept the legitimacy of Alina’s conversion because he did not believe she was observant at the time of conversion. Her letter from the regional rabbinic court confirming that she is Jewish failed to sway him.

Blau said that if Alina had provided one “trusted witness” who could confirm that she publicly observed the Sabbath immediately after her conversion, he would have registered her. Alina’s husband said that she subsequently found a witness but that Blau failed to respond to requests to set up a meeting.

The bride and groom were crestfallen, but they began exploring other options and soon discovered that all they needed to do was to drive 20 minutes southeast and register their intention to marry in the village of Beer Tuvia. The idea came from Rabbi Farber of ITIM, who went on to perform their wedding ceremony.

The Serjukovs’ case is symptomatic of a creeping rebellion by state-salaried ultra-Orthodox rabbis against conversions performed by the very rabbinic establishment that appointed them. The state rabbinate in Israel is a complicated structure of national and local bodies staffed by both Modern Orthodox rabbis who are avowedly Zionist and by Haredi rabbis who are non-Zionist or even anti-Zionist.

The rebellion on conversion, which has been brewing for more than a decade, found its most forceful expression to date in 2008. Then, the rabbinic court in Ashdod, a few miles north of Ashkelon, ruled that a woman getting divorced, who had converted to Judaism 14 years earlier, was never really Jewish. The court’s presiding rabbi claimed she had failed to observe Jewish law once she was declared Jewish and that she had never intended to observe it.

The woman appealed to Israel’s Supreme Rabbinical Court, where a panel of three state-salaried rabbis not only upheld the Ashdod decision but also upped the ante: It cast doubt on all conversions performed under the auspices of the rabbi responsible for hers. This was Rabbi Haim Druckman, a leading Modern Orthodox figure who had converted or approved the conversion of around 40,000 people, as the head, from 2004 to 2008, of the national Conversion Authority.

After several years of attempting to centralize conversion the government had established the authority in 2004. Its mandate was to facilitate, oversee and authorize conversions. It converts about 6,000 people a year, including almost 1,000 who — like Alina — take part in the army’s conversion program.

Since the 2008 ruling, there has been no agreed solution to the “conversion crisis,” as it has been termed, and the numbers affected are growing as Haredi skepticism applies to new Conversion Authority conversions. People who have converted through the Conversion Authority are at the mercy of individual local rabbinates if they want to marry.

Farber said he has identified five local rabbinates where all converts are being stonewalled. He said that a reality is emerging in which converts have to tread carefully and make tactical decisions of which rabbinate to approach.

The structure of the Israeli rabbinate is extremely complicated, and while marriage registrars are appointed by the Chief Rabbinate, once in place they are, for all practical purposes, autonomous. Chaim Hamendiger, chief of staff in the office of Ashkenazic Chief Rabbi Yona Metzger, told the Forward that if a marriage registrar has doubts about the authenticity of a conversion, he is entitled to refuse registration.

But Yitzhak Peretz, spokesman for Amar, the Sephardic chief rabbi, told the Forward that the Chief Rabbinate is making it known that in areas where converts are encountering difficulties, rival rabbinates from other locales are able to set up facilities for marriage registration.

Farber is concerned that converts who manage to register their marriages could still face problems in the future, and that if the legitimacy of their conversion is called into question, their children could grow up believing they are Jewish and then be told that they are not.

Farber is drafting a petition to Israel’s Supreme Court that asks it to force the Chief Rabbinate, which appoints marriage registrars, to fire any registrars not processing marriage applications for converts.

“Willy-nilly we have created two Jewish peoples — one with good marriage certificates and another with certificates that can be called into question,” he said.