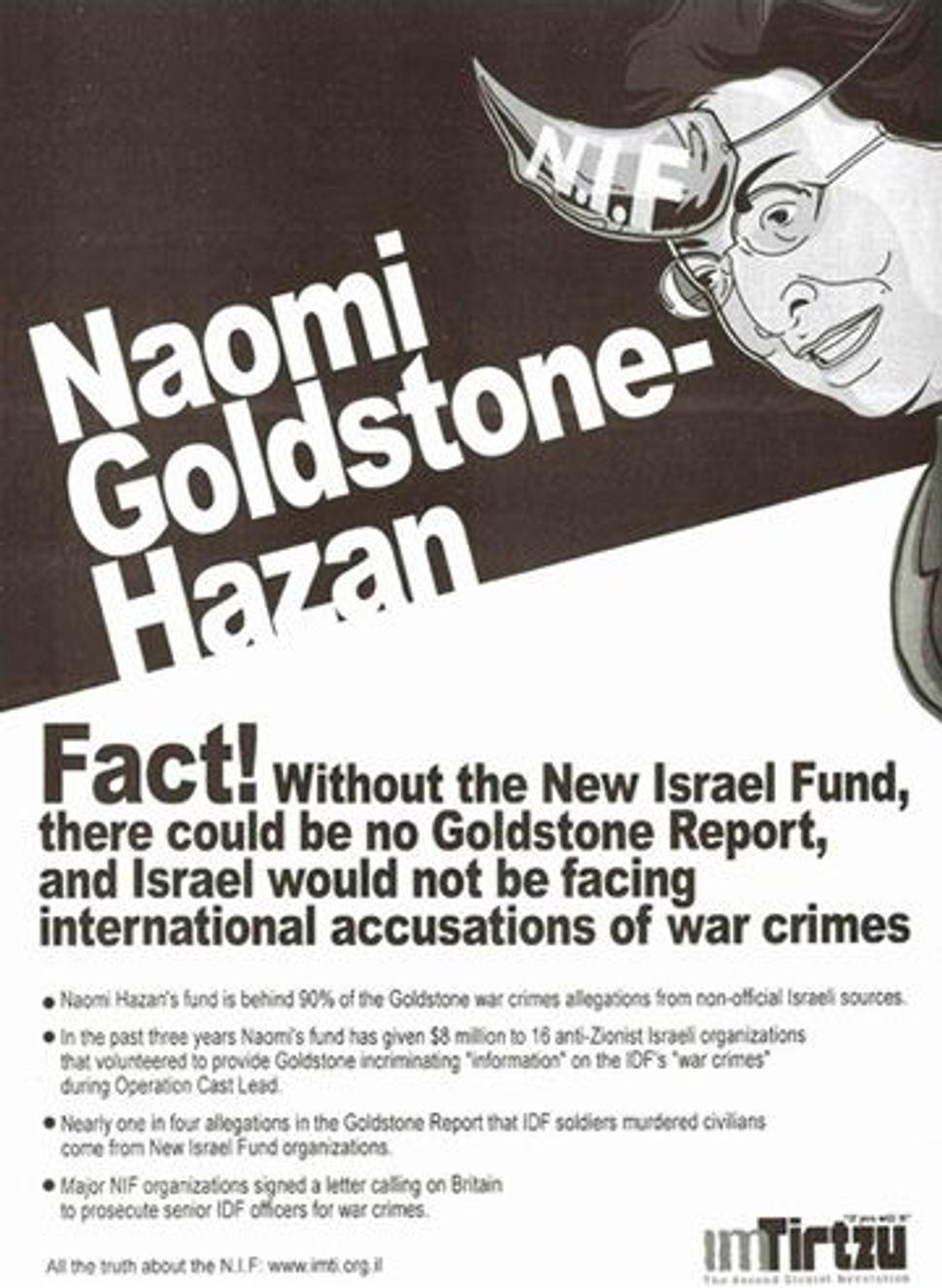 Under attack as a subversive, anti-Israel group, the New Israel Fund, the largest financial supporter of human rights groups in Israel, has opted to respond by rallying supporters of a progressive agenda in Israel. 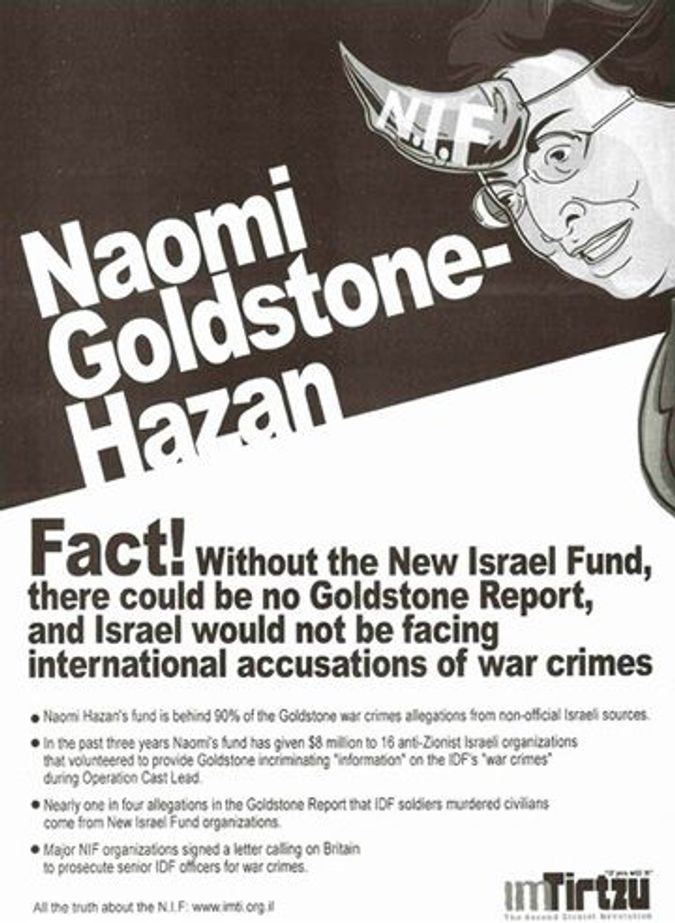 Adopting a notably combative tone under new leadership, the American- based charity is depicting an accusatory report by a new Israeli organization — trumpeted in a front-page story in Maariv, a major Israeli daily — as the last straw in a series of attacks against likeminded groups.

But as members of Israel’s Knesset called for hearings to look into the report’s charges, NIF’s effort to rally a broad range of Jewish groups to its side met with only limited initial success.

The charges against NIF come from Im Tirtzu, a recently formed, self-described centrist Zionist group. In a report released January 29, Im Tirtzu claimed that NIF grantees were responsible for 92% of the critical information included in the United Nations’ Goldstone Report, which found that Israel had committed war crimes during its 2008 Gaza military operation. Im Tirtzu claimed to have quantified the role of NIF’s grantees through a careful review of the Goldstone Report’s footnotes, in which it cites its sources.

Citing such NIF grantees as B’Tselem and Physicians for Human Rights, the Im Tirtzu report concluded, “The results of these groups’ activities caused significant diplomatic damage to Israel and harmed the country’s military ability to defend itself at a time of war.”

It was a charge that NIF could not afford to take lightly, given the near-universal condemnation being heaped on the Goldstone Report in Israel. The Im Tirtzu report’s heft was magnified when Ma’ariv, Israel’s second largest daily paper, published a three-page article on Im Tirtzu’s findings by its top political correspondent on the same day the report was released.

Israeli officials view the commission’s charge that Israel deliberately hit civilian targets as an arrow aimed at the state’s legitimacy, with inevitable implications for those seen as having supported the perceived assault.

Im Tirtzu highlighted its campaign against NIF with ads in Israeli newspapers declaring that “without the New Israel Fund there could be no Goldstone Report,” and depicting the group’s president, Naomi Chazan, with a horn coming out of her forehead. The graphic was a play on words in Hebrew, in which the word for “fund” also means “horn.” But NIF leaders, citing age-old antisemitic depictions of Jews as people with horns, complained that the ads carried an antisemitic undertone.

There were also demonstrations staged against Chazan. One, outside her Jerusalem home, included protesters dressed as Hamas activists showing their “support” for the fund. Another, on the sidelines of a high-profile annual national security conference in Herzliya, included images of Israel’s defense minister and its chief military commander behind bars, with a sign that read “prisoners of the fund,” referring to possible war crimes investigations against Israeli leaders as a result of the Goldstone Report.

The group leading the charge is a relatively new player on the Israeli political scene. The organization’s name is Hebrew for “if you will it,” evoking an old-style Zionist theme based on a phrase coined by Theodor Herzl, modern Zionism’s founding father: “If you will it, it is no dream.”

Israeli lawmakers also took up the issue. Member of Knesset Otniel Schneller from the centrist Kadima party submitted a proposal for a parliamentary inquiry into NIF’s activities. Such an act is considered unusual in Israeli politics and has only been taken a few times in the past. If established, a Knesset inquiry committee could summon witnesses and issue a report.

Other lawmakers have called for a special meeting of the Knesset’s Foreign Affairs and Defense Committee to discuss the issue.

Israel’s minister of Information and Diaspora Affairs, Yuli Edelstein, said during a February 2 visit to Washington that the support provided by NIF to such groups “has reached an absurd level” and that “it is worth looking into.”

The outburst of criticism in Israel caught leaders of NIF as they convened in New York for the group’s first board meeting with its newly appointed CEO, Daniel Sokatch.

“It put people in a good fighting mood, all fired up and ready to go,” Sokatch said of the initial reaction among activists upon hearing of the campaign.

The group stressed that it had no plans to reconsider its support for organizations that investigated Operation Cast Lead in Gaza.

A review of NIF’s 2007 tax records — the most recent publicly available — showed that its expenditures on program services in Israel that year were about $16.5 million . Among its largest grantees were the Association for Civil Rights in Israel, B’Tselem and Physicians for Human Rights, all of which deal at least partly with defending Palestinian rights. NIF also provides grants to groups involved in Israel’s civil society, including women’s shelters, groups aiding Ethiopian Jewry and organizations challenging Orthodox Judaism’s state-backed monopoly on Jewish religious life in Israel.

NIF officials viewed the attack as an opportunity to energize supporters. They vowed to take on Im Tirtzu publicly and to fight for what they viewed as a series of attempts to infringe on freedom of speech in Israel.

“We know that Bush and Cheney were very unhappy when the ACLU told the world that the U.S. is using waterboarding, but does that mean we shouldn’t know about it?” Sokatch asked. He acknowledged that some of the information revealed by organizations in Israel “could give some comfort to Israel’s enemies,” but he also emphasized that it is much more important “for Israel’s moral fiber and its values to tell the truth.”

The group quickly sent out an e-mail blast presenting its view on the Im Tirtzu report and making a pitch for donations to support NIF work.

As it happened, Im Tirtzu’s report against NIF came out the same week that an official Israeli response to the Goldstone Report acknowledged the work of one of NIF’s grantees, B’Tselem, in helping the Israeli army interview Palestinians and gather evidence on the events of the war.

NIF cites several instances from recent months as indications that Israel is becoming less tolerant toward groups fighting for human and civil rights. The list includes attempts by nongovernmental organizations’ watchdog groups to stop funding for not-for-profits that do not support the views of the Israeli government; the interrogation of Anat Hoffman, leader of the feminist religious group Women of the Wall, by the police, and the arrest of Hagai El-Ad, executive director of the Association for Civil Rights in Israel, during a demonstration in East Jerusalem.

Simultaneously, NIF supporters began questioning the sources of finance provided to Im Tirtzu — most significantly, the Rev. John Hagee, who is a both a fiery American supporter of Israel’s right wing and the founder of Christians United for Israel.

CUFI spokesman Ari Morgenstern told the Forward that funding in the sum of $200,000 over the past two years was provided by John Hagee Ministries, not by CUFI. He stressed that Hagee disagreed with the images portrayed in the ads. “Although we are often demonized by our critics, we never demonize those with whom we disagree, and we object when others do,” he said.

NIF also sought backing from major Jewish groups, stressing the harsh nature of the attacks and the use of troubling images in the campaign. As of February 3, only Americans for Peace Now, J Street and the Religious Action Center of Reform Judaism had issued statements in support of NIF.

Abraham Foxman, national director of the Anti-Defamation League, told the Forward that he believes attacks against NIF and Chazan are “unjustified” and that he knows the group is “only trying to do good.” Foxman did, however, suggest that Jewish funds should have standards for organizations they support. He cited the demand put forward to the Ford Foundation in 2003 that it not provide grants to groups that delegitimize Israel.