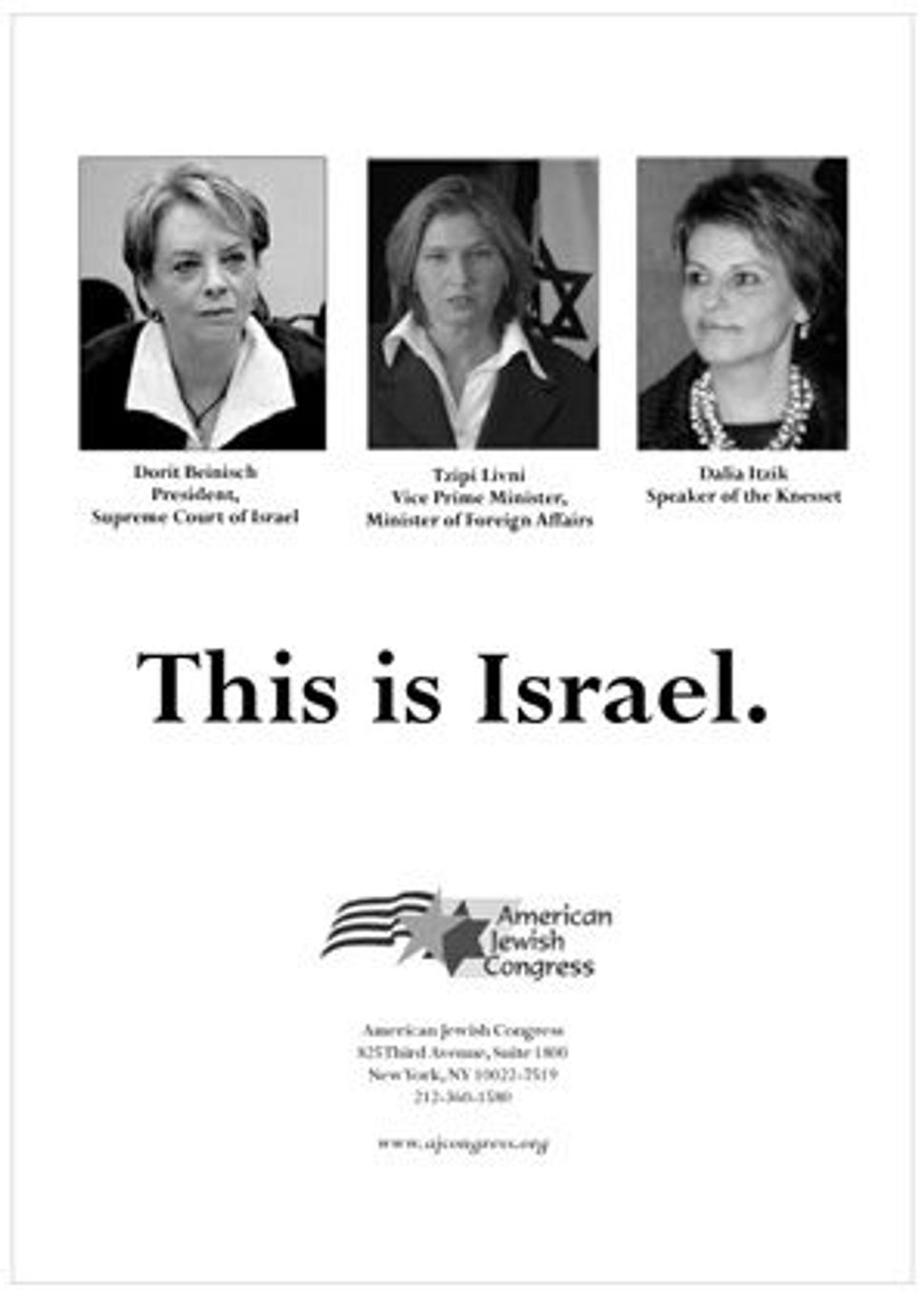 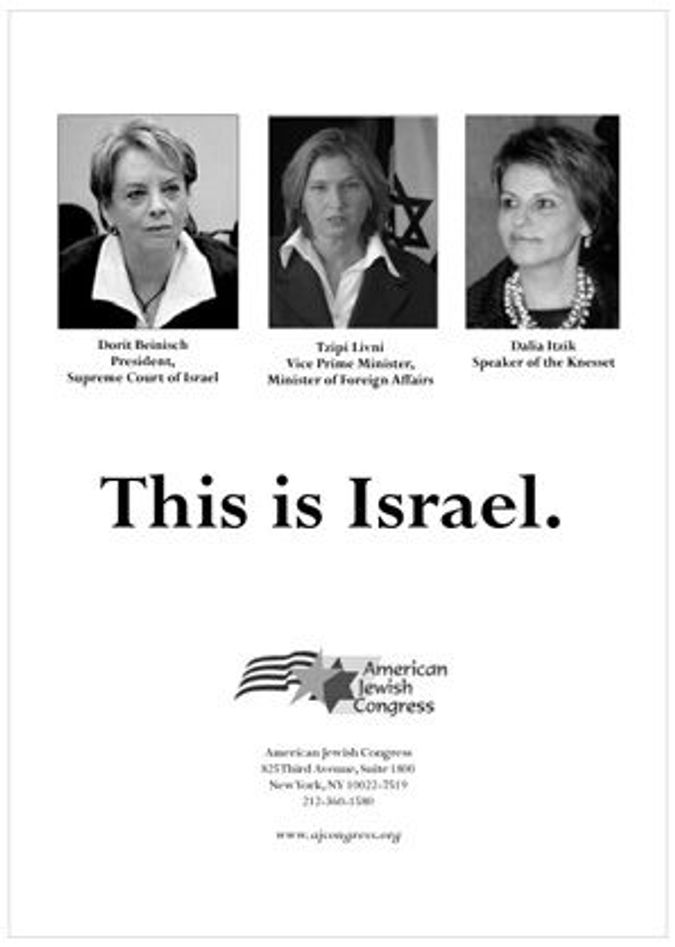 The ad was submitted by the American Jewish Congress to Ms. Magazine, and spotlighted photographs of Dorit Beinisch, president of Israel’s Supreme Court; Tzipi Livni, Israel’s foreign minister, and Dalia Itzik, speaker of the Knesset, over the text, “This is Israel.”

According to the AJCongress, Ms. initially approved the ad but then reversed course, saying that the ad would “set off a firestorm.”

As it turns out, it has.

“Since there is nothing about the ad itself that is offensive, it is obviously the nationality of the women pictured that the management of Ms. fears their readership would find objectionable,” AJCongress President Richard Gordon said in a statement. “For a publication that holds itself out to be in the forefront of the women’s movement, this is nothing short of disgusting and despicable.”

Ms. Magazine’s executive editor, Kathy Spillar, said that it was not the women’s nationality but their party affiliation that was the problem. Two of the featured officials, Itzik and Livni, are both members of the Kadima political party, and thus, Spillar said, the ad would leave Ms. Magazine open to the charge of political favoritism.

The AJCongress elevated the feud Tuesday by mounting a press conference featuring several prominent Jewish feminists, including Blu Greenberg and Phyllis Chesler, who criticized Ms. Magazine for its stance in the incident.

“Ms. has a history of celebrating gains, so its denial here is quite painful to Jewish, Zionist feminists,” Greenberg said at the press conference.

Greenberg, who is Orthodox, praised Israel’s record on women’s rights and accused Ms. of abandoning its independence to align itself with people on the radical left who want to delegitimize Israel.

The spat is particularly notable, given that a number of prominent feminists, including Betty Friedan, Bella Abzug and Ms. co-founder Letty Cottin Pogrebin, were members of the AJCongress’s Commission on Women’s Equality. Pogrebin, who co-founded the magazine with Gloria Steinem, has been a public defender of Israel. Pogrebin could not be reached for comment.

The AJCongress created the ad to highlight the fact that women now occupy leading positions in Israel’s executive, legislative and political branches. In response, a Ms. representative said that “we would love to have an ad from you on women’s empowerment, or reproductive freedom, but not on this,” according to the AJCongress.

Spillar defended the magazine, saying Ms. made it clear that it wanted to avoid the charge of political meddling.

“We didn’t feel adequate to the task of putting an ad in that might be seen as meddling in the internal politics of Israel,” Spillar told the Forward. “We wouldn’t do it for any other country, either.”

AJCongress officials told the Forward that Ms. did not initially mention anything about political parties or internal meddling.

“It is the lamest of excuses that I’ve ever heard, on its face,” senior official David Twersky said.

Since the story has broken, Spillar released a statement suggesting that part of the problem was the ad’s portrayal of Israel.

“Not only could the ad be seen as favoring certain political parties within Israel over other parties, but also with its slogan, ‘This is Israel,’ the ad implied that women in Israel hold equal positions of power with men,” she said. “Israel, like every other country, has far to go to reach equality for women.”

In its defense, Ms. has pointed to its own coverage of Israel, including a recent article by Israeli feminist Alice Shalvi, a profile of Beinisch and a profile of Livni set to appear in the upcoming issue.

“We have so few role models in this country — two female ministers, a speaker of [the] House, 17 women members in the Knesset out of 120,” Bar-Tal told Ms. “We would like them to be part of the fight, the campaign, part of us.”