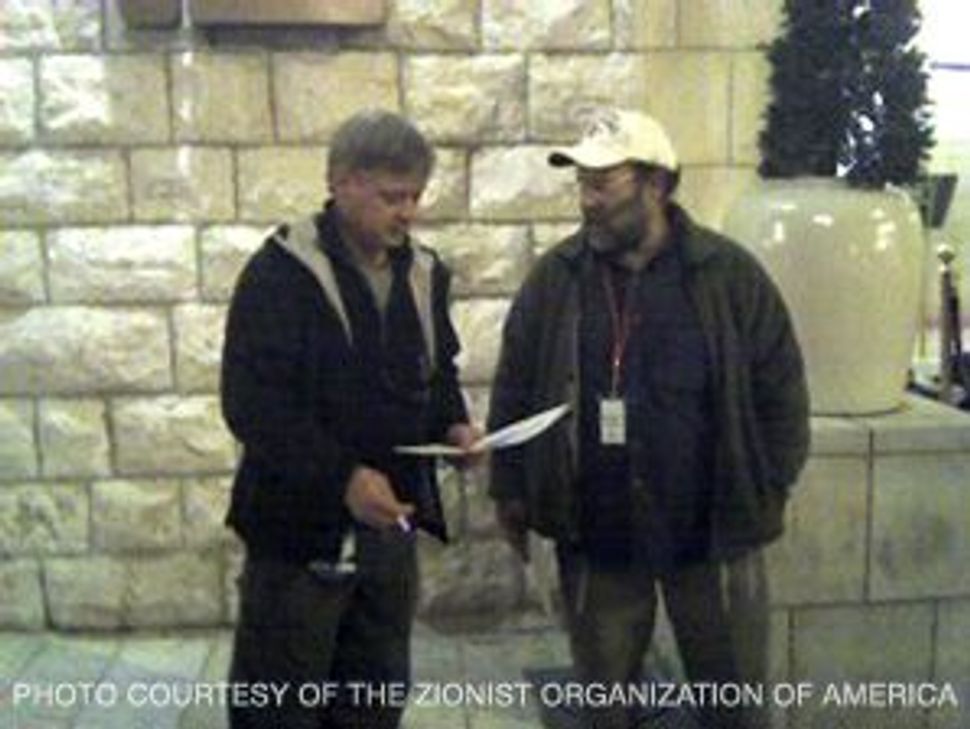 Handout: Yosef Hartuv, one of the activists who was detained, hands a booklet to a Fox News cameraman.

Washington – The detention of three right-wing activists during President Bush’s visit to Israel has sparked claims that Israeli police are intentionally targeting groups and individuals who oppose the push of Ehud Olmert’s government for a two-state solution. 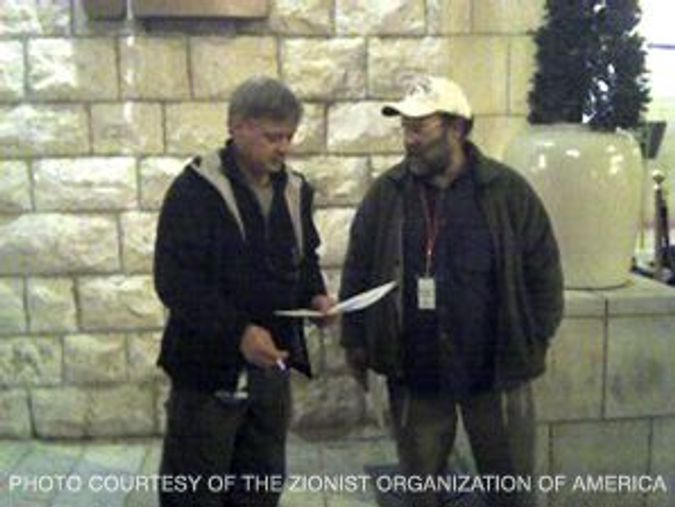 Handout: Yosef Hartuv, one of the activists who was detained, hands a booklet to a Fox News cameraman.

The three activists — from the Israel office of the Zionist Organization of America and the National Council of Young Israel — were taken in by police in Jerusalem while trying to hand out booklets to reporters who were covering Bush’s trip. Israeli police said that the officer in charge initially suspected that the booklets, which criticized Palestinian leadership, might have contained “seditious material.”

For Israeli and American groups opposed to the Olmert government’s willingness to compromise with the Palestinians, the incident last Wednesday, January 9, is seen as the latest in a chain of events. Tensions began with restrictions on demonstrations during the Gaza disengagement in 2005 and culminating in the violent events surrounding the evacuation of the Amona outpost in February 2006.

“What kind of country is this? I would expect to see this kind of behavior from other countries, not from Israel,” said Morton Klein, national president of the ZOA. Klein described the incident as a “clear violation of the rights of free speech and assembly.”

The incident occurred as Bush was beginning his visit to Israel. A handful of activists stood at the entrance of the Dan Panorama, the hotel housing the White House press corps, and tried to distribute booklets to reporters covering the visit. The 27-page booklet, titled “Fatah as ‘Moderate’: A Hard Look Post-Annapolis,” argues that Fatah, the leading party in the Palestinian Authority, is not sincere in pursing peace. Arlene Kushner, a writer known for her pro-settler sympathies, wrote the booklet. It was published by the Massachusetts-based Center for Near East Policy Research, which is headed by journalist David Bedein.

Israeli police officers approached the activists and confiscated the booklets. Later they took the three protesters who remained in the area to Jerusalem’s Russian Compound police station. The protesters were all released an hour later and were ordered not to return to the hotel. No charges were pressed.

Among those detained was Jeffrey Daube, 57, head of ZOA’s Israel office. This was a first-ever encounter with Israeli law enforcement agencies for Daube, who moved to Israel from New York only two weeks earlier to open a new ZOA office. “This was a very unusual welcome, but I’m not discouraged,” Daube said after being released. He charged, however, that his detention was more than a misunderstanding. “In my humble opinion, there was a concerted effort to suppress any protest in order to make the impression that the public here acquiesces with the government’s policy,” he said.

Israeli police spokesman Mickey Rosenfeld told the Forward that the activists were detained because the lead officer on the scene became suspicious of the material being handed out. According to Rosenfeld, the protesters were released after the booklets were examined,. “In general, we did not take any chances regarding the security during President Bush’s visit,” Rosenfeld said, adding that the police had prepared for several scenarios — including possible provocations by right-wing activists.

Thousands of police officers fanned out across Jerusalem during the visit, virtually closing any route through which the presidential motorcade traveled. According to police reports, there was only one arrest of protesters, during a demonstration outside the residence of Israeli President Shimon Peres.

While Israeli law enforcement officials portray the incident as a result of extraordinary security measures during the visit, activists see it as a violation of their right to freedom of speech and assembly. Knesset member Arye Eldad of the pro-settler National Union party raised the issue in a formal query to Avi Dichter, minister of internal security, demanding an explanation of police behavior. “The police should allow the distribution of material to journalists and not act like the police in a totalitarian state,” Eldad said.