Venezuela’s Jews Find Their Voice as Chavez Ramps Up Harassment 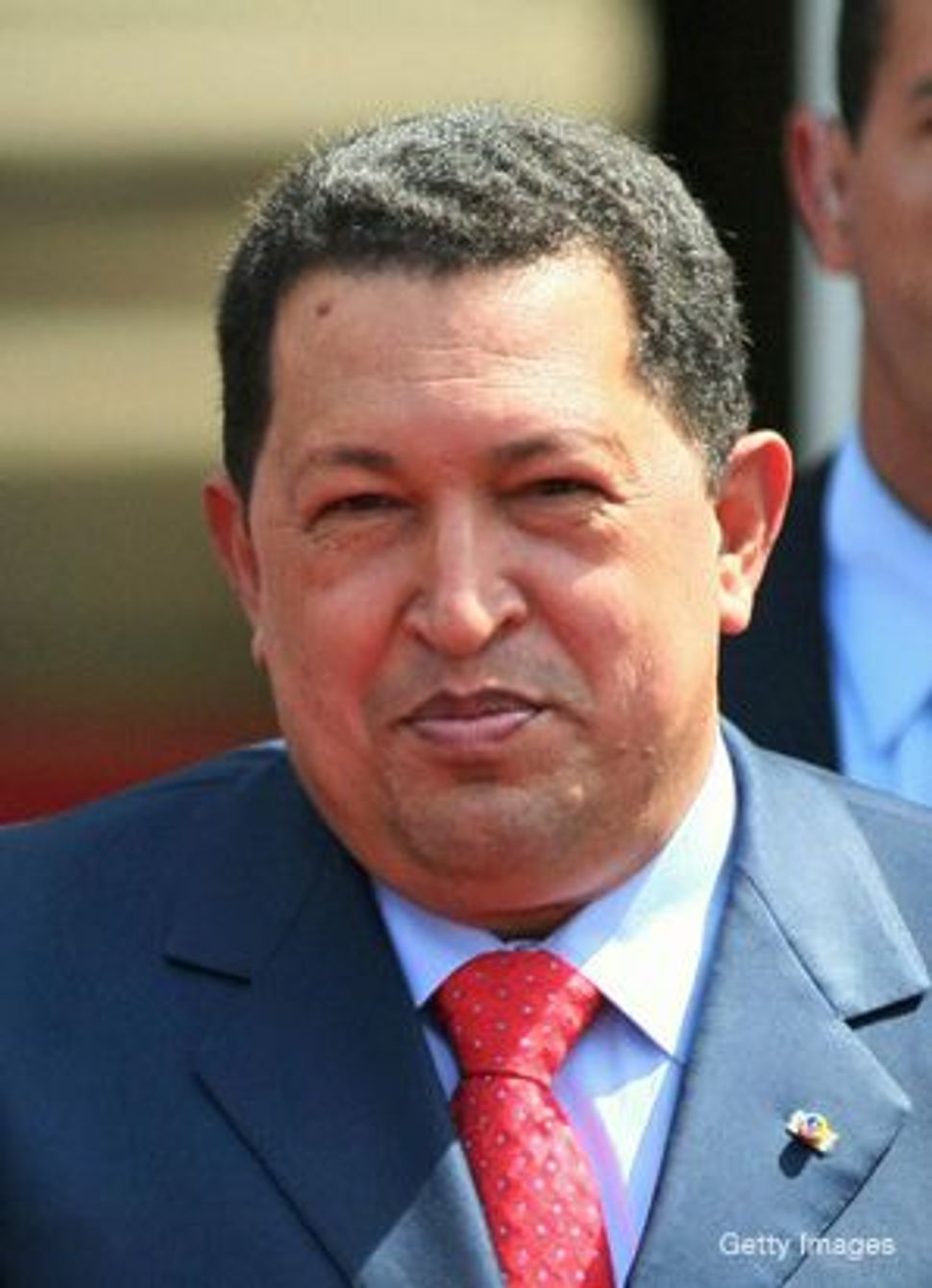 Chavez: Venezuela's president has earned the ire of his country's Jewish community 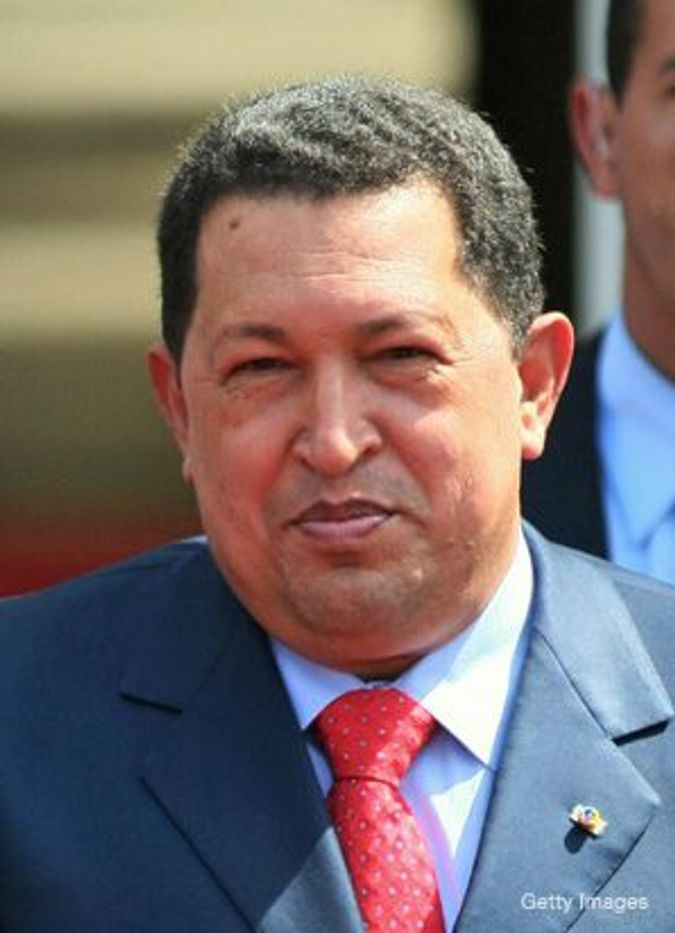 Chavez: Venezuela's president has earned the ire of his country's Jewish community

The government officers who entered the sprawling, country club-like complex were ostensibly looking for a stash of weapons and for evidence of “subversive activity.” They found neither. In the subsequent days, the Venezuelan Jewish community’s umbrella organization, the Confederation of Israelite Associations of Venezuela, fired off a statement denouncing the raid as an “unjustifiable act” aimed at creating tensions between the community and the government of socialist President Hugo Chavez.

This would not be remarkable in the United States, where Jewish groups routinely state their views with little trepidation. But their counterparts abroad have tended to be less confrontational, especially in countries with small communities and a volatile political environment. In Venezuela this has been the case until recently, despite a long series of problems that includes an earlier raid on the Hebraica center, antisemitism on state-controlled media and anti-Israel pronouncements by Chavez. The calculated quiet ended with last year’s December 1 raid.

“We’re facing the first anti-Jewish government in our history,” Simon Sultan, president of Hebraica, told the Forward in an interview in his office, located in a tony Caracas neighborhood.

The December operation took place on the night preceding a crucial referendum on proposed constitutional reform that would have granted Chavez broad powers and the possibility to run indefinitely. The reform was rejected by a thin margin.

“It seems that the only interpretation is that this was an intimidation by the government,” Abraham Levy Benshimol, president of CAIV, told the Forward.

Venezuela’s Jewish community numbered about 16,000 until Chavez was elected in 1998, and has since declined to around 12,000. The community comprises émigrés who began arriving in the mid-19th century from both North Africa and Eastern Europe, with the majority arriving during and after World War II. Evenly made up of Ashkenazic and Sephardic Jews, the community has thrived in the oil-rich country. Benshimol said that it has maintained “good relations with the Venezuelan government since the end of military dictatorship in 1958.”

CAIV’s president also said that the ties continued when Chavez came to power and initially met with CAIV leaders. What has happened since then is a long and complicated story of domestic and international power politics.

One of the first points of tension was the April 2002 coup attempt against Chavez. Michael Penfold-Becerra, a political scientist at Caracas’s institute of superior administrative studies, said that among some government officials, suspicions against Jews were fueled by the alleged support of prominent rabbi Pinchas Brenner for the authors of the short-lived coup, as well as by the perception that Israelis and Jews were active in the arms business.

The first raid, in 2004, heightened the tensions, especially since it took place early in the day when hundreds of children were on their way to school.

The tensions escalated again during the 2006 summer war between Israel and Hezbollah in Lebanon, when Chavez accused Israelis of behaving like Nazis. He recalled the charge d’affaires of the Venezuelan Embassy in Tel Aviv, and Israel, in turn, called back its ambassador. Although the Israeli diplomat returned to Caracas a month later, and Venezuela sent a low-level envoy to Tel Aviv, the relationship remains fraught.

The Jewish community turned to Argentina’s government to intercede with Chavez, and last January the self-described “Bolivarian” leader agreed to meet with CAIV following a request by Nestor Kirchner, then president of Argentina.

Through it all, Benshimol and others have stressed that there has been no instance of physical violence against Jews in the country. And they have, on occasion, defended Chavez against accusations of antisemitism aired by such American Jewish groups as the Simon Wiesenthal Center.

But the atmosphere has worsened lately, first and foremost because of Chavez’s increasingly inflammatory talk about Israel and its supporters. A television program called “The Razor,” broadcast on a state-owned channel, has featured lengthy rants about the presence of Mossad agents allegedly in the country working to unseat the Chavez regime with the support of the United States and opposition forces in Venezuela. The host of the show has also questioned the loyalty of leading Jewish figures to their home country. Despite repeated complaints by CAIV, the authorities have taken no action.

In March 2007, there were no government officials in attendance at the 40th-anniversary celebration of CAIV. Benshimol said that the government has had no official ties with his organization for the past year.

The deteriorating atmosphere has prompted a sizable exodus of Jews from Venezuela. While precise numbers are hard to come by, the number of children attending the school at the Hebraica center has dropped some 37% in the past decade, while membership at the club has slipped 30%.

Most of the departed have moved to South Florida, Spain and Israel — although some of them continue to commute to Venezuela to tend to their business. While Jews are by no means the majority of this mostly middle- and upper-middle-class Venezuelan exodus, the small size of the community makes their departure much more damaging, especially since they include many of the community’s wealthiest contributors. As a result, the community has struggled to meet its budgetary targets. Leaders proudly explain that the institutions have been able to continue functioning while acknowledging that this could change rapidly, especially given the growing inflation and the very limited financial contributions of exiled Venezuelan Jews.

“If the exodus continues, we’ll have problems catering to the community, especially the poor, which make up a quarter of our Jews,” Benshimol said.

In the end, though, it was not the immigration but the raid that convinced the community to speak up. The operation was led by the equivalent of the FBI, whereas the more recent raid was done by officers from a police force under the control of the Interior Ministry and, as such, closely tied to the presidency. While there is no evidence that Chavez himself ordered the latest raid, the all-powerful Interior Ministry is one of his strongest levers.

The run-up to the December referendum was not a good time for the Jewish community’s relationship with Chavez. The community had close ties with former defense minister Raúl Isaías Baduel, and it honored him after he left the government and became a fierce opponent of Chavez. The honor was used by some pro-Chavez circles to claim that an American-Zionist conspiracy was trying to oust the president from power.

Jewish communal leaders also believe that another element might be at work. Sultan noted that Tarek al Assaimi, a former far-left student leader whose father was the representative of Saddam Hussein’s Baath party in Venezuela, is the deputy Interior and Justice minister in charge of internal security and, as such, could have been involved in initiating the raid.

A few days after the raid, Sultan and Benshimol went to the interior and justice ministries to meet with a prosecutor who opened a probe into possible irregularities surrounding the police operation, which was ordered by another prosecutor. A previous probe into the 2004 incident never produced any official outcome — and neither leader expressed much optimism that the outcome would be different this time.

Asked about the possibility that the bulk of the community might choose to go to Miami, Madrid or Tel Aviv for good, Benshimol paused. “We want to live here, but we want to live in dignified conditions,” he said.

Venezuela’s Jews Find Their Voice as Chavez Ramps Up Harassment