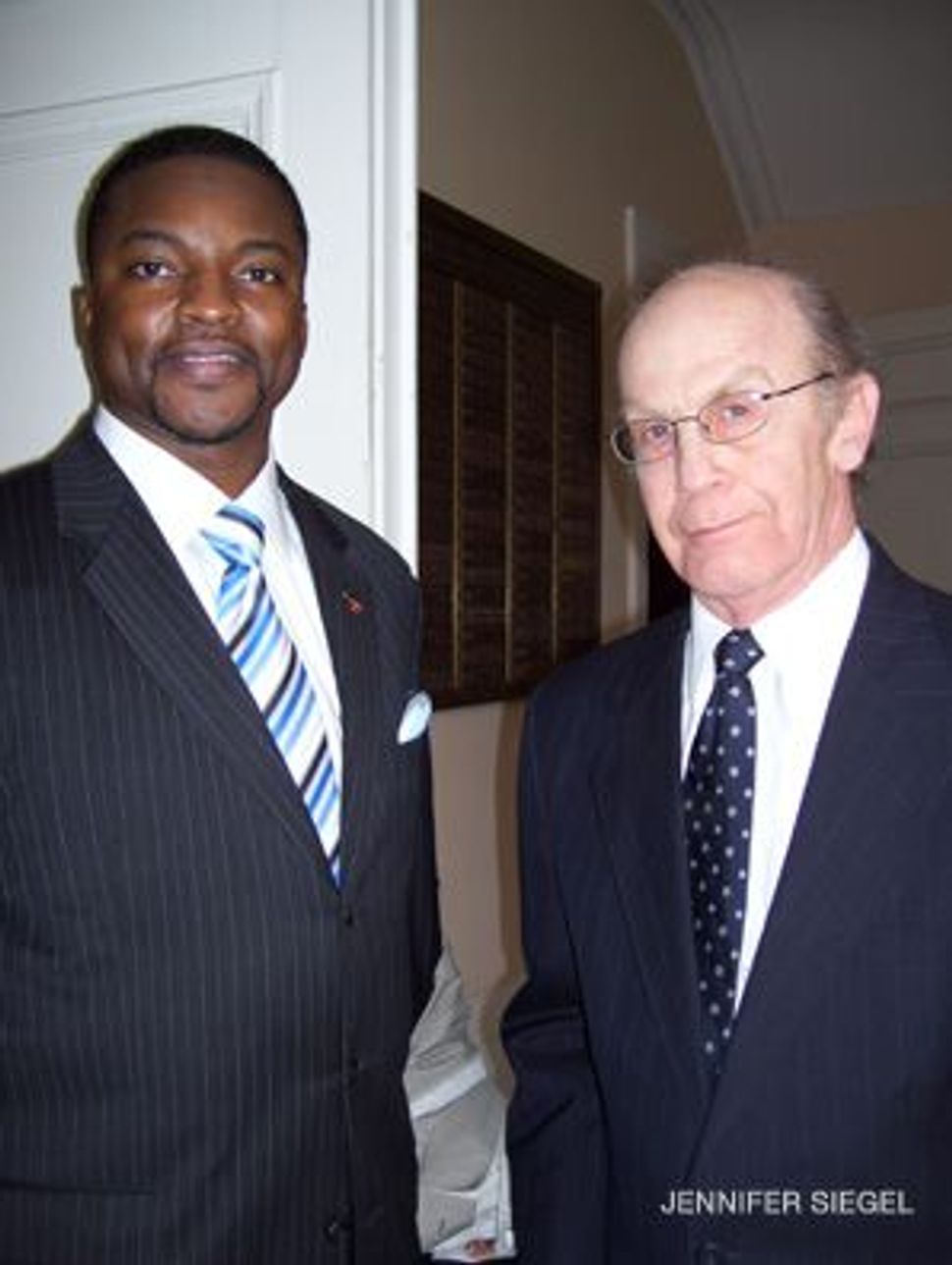 Come Together: Rev. Leonard Griffin and Rabbi Anthony Holz at the MLK service.

Charleston, S.C. – At first glance, there seemed to be few surprises at a packed Sunday morning lecture sponsored by the Jewish studies department at South Carolina’s College of Charleston. The attendees circulated amid trays of bagels and lox and, when asked about the upcoming presidential primaries in their state, rattled off the usual list of concerns: the Iraq War, terrorism, support for Israel, health care. An informal poll found the most support for Senator Hillary Clinton, with Senators John McCain and Barack Obama close behind. 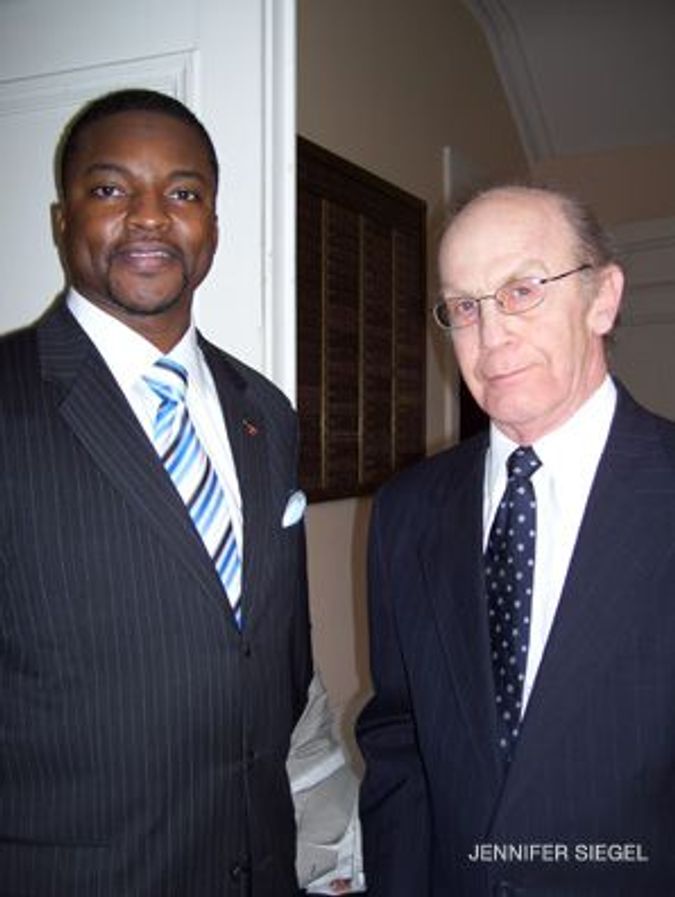 Come Together: Rev. Leonard Griffin and Rabbi Anthony Holz at the MLK service.

At least one person, however, had taken sharp notice of unfounded rumors about Obama that have spread in the Jewish community in recent weeks through e-mails and word-of-mouth.

“I really think I’m likely pro-Hillary, because I hear Obama has too many ties to the Muslims,” said Anne Hellman, a Charleston resident who is in her 60s. “I don’t like the fact that — as I’ve been told — he’s actually a Muslim and I haven’t had a chance to prove or disprove it.”

The fact that even one person gave credence to the dubious charge points to the unease about Obama’s candidacy that has quietly permeated some pockets of the Jewish community for months, and burst forth into the news coverage this week, as national Jewish leaders spoke out against the unsubstantiated allegations. But it also may point to a broader, related phenomenon: the increasingly distant relationship between the African-American and Jewish communities — a gap that has particular resonance in Southern communities like this one. While blacks and Jews in northern urban areas have historically rubbed shoulders as two powerful minority groups, the South’s much smaller Jewish communities have long grappled with how to balance outreach to African Americans with concerns about fitting in with white Christians.

“There are four identities for Jews in South Carolina,” said Jack Bass, a journalist and scholar of racial politics in the South who, as a child in the 1930s and ’40s, grew up in the only Jewish family of his tiny town. “There’s a Jewish identity, a southern identity, a South Carolinian identity and an American identity — and not necessarily in that order.”

In this year’s contest, Jewish voters in South Carolina — who account for a mere one-half of one percent of the state’s population — have been largely ignored by the presidential candidates. But the current lack of attention belies a long history of the Jewish community’s intimate involvement in state politics.

Indeed, South Carolina’s Jewish community, one of the oldest in the country, was once the center of Jewish life in America. At its founding, the Carolina colony offered liberal provisions for religious tolerance, and elected the first Jewish man to public office in the Americas, Francis Salvador. As a state, South Carolina later was the first to grant Jews the right to vote, and was home to more Jewish residents, some 2,000, than any other state up until the 1830s.

Finding an unprecedented degree of religious tolerance and political standing from the outset, Jewish South Carolinians have long been fiercely patriotic, seeking to balance their Jewish identity with acceptance into the larger white community — including by tolerating Carolina’s standing as the only American colony with a charter that sanctioned racial slavery. Like their white Christian counterparts, Jewish residents kept slaves.

In the 20th century, Solomon Blatt, a Jewish politician who served as speaker of the South Carolina House of Representatives for more than three decades, spoke out publicly against a civil rights era effort to restore compulsory public education in the state. A fellow Jewish legislator, Isador Lourie of Columbia, was a leading voice on the other side of the issue.

In the decades following the civil rights movement, a new generation of progressive Jewish politicians collaborated closely with black colleagues in the State House. In Charleston in the 1970s, a coalition of blacks and Jews helped push through legal reforms that strengthened minority voting power by eliminating the county’s “at-large” voting.

Several observers in the state credited a redistricting plan, passed in the early 1990s, with boosting the number of African Americans elected to the legislature but drastically reducing the number of white Democratic officials, including Jewish Democrats.

Today, at a national level, black and Jewish leaders have worked to tamp down simmering tensions between the groups. Last Tuesday, the American Jewish Committee, leading a coalition of nine national Jewish groups, issued a statement decrying a series of “hateful emails besmirching” the senator with a number of claims, including that he is secretly a Muslim. The same day, Obama himself went on the defensive with a statement assuring the Jewish community that he decries “racism and anti-Semitism in every form,” as well as antisemitic statements made by Nation of Islam leader Louis Farrakhan. The remarks were issued after Richard Cohen, a columnist for The Washington Post, revived concerns over links between Farrakhan and Obama’s spiritual adviser, the Rev. Jeremiah A. Wright Jr., in a column published January 15.

In South Carolina, where one Jewish resident observed that politeness often seems like the state religion, such charged exchanges are rare.

Our wish is “that we not go back to our respective homes, but continue to work together,” said the Rev. Stephen Singleton, pastor of the city’s Mother Emanuel A.M.E. Church.