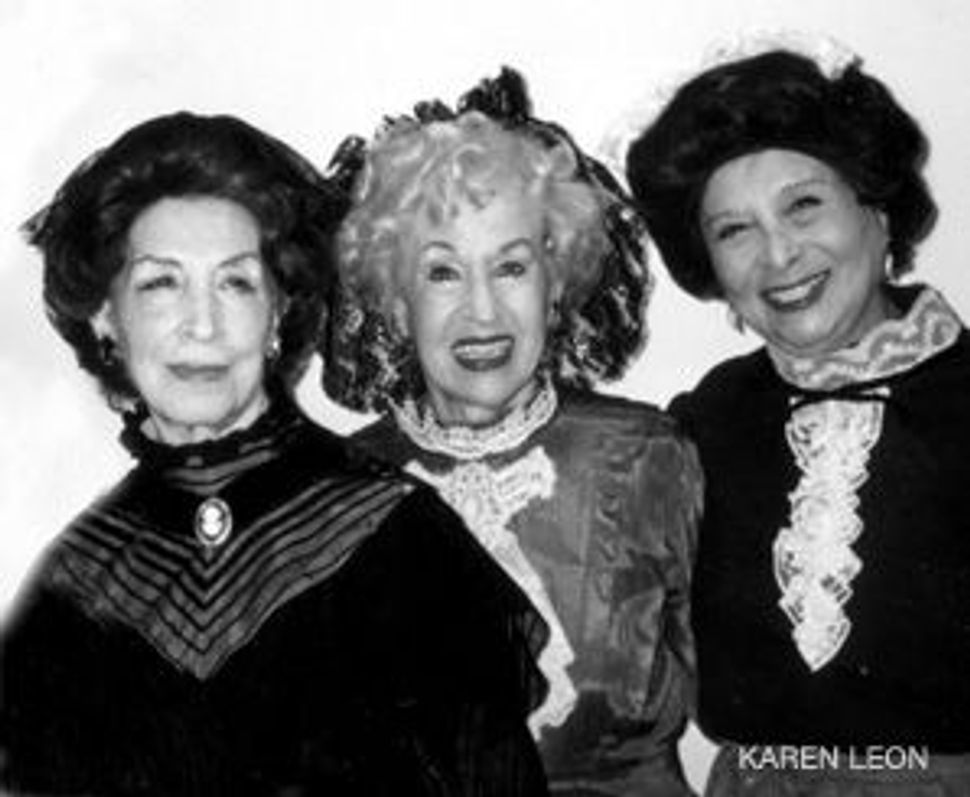 APPLAUSE, APPLAUSE FOR FOLKSBIENE AND ITS GALA GUESTS 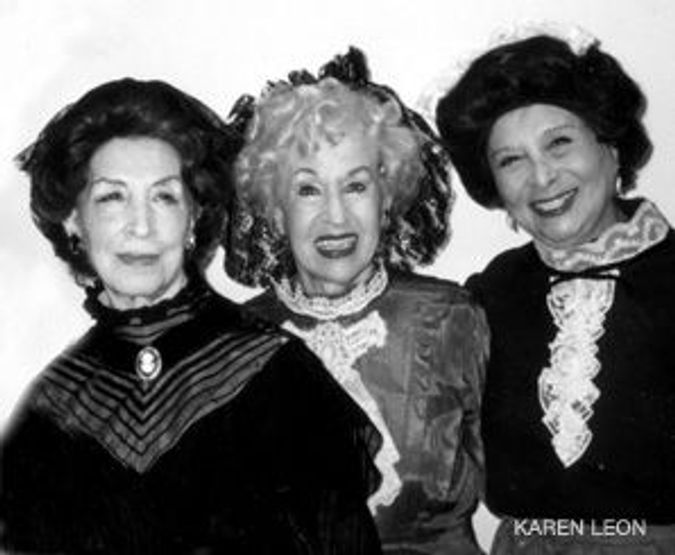 With the rave reviews of its 2007 season’s centerpiece “Kleinkunst!” cabaret production resonating, the National Yiddish Theatre-Folksbiene chairman of the board, Jeff Weisenfeld, welcomed the festive crowd at Folksbiene’s December 10 benefit dinner, held at Manhattan Center Studio at Manhattan’s Center. The guest roster included lyricist Sheldon Harnick (“Fiddler on the Roof”); dazzling klezmer fiddler Alicia Svigals; stage, screen and TV star Bebe Neuwirth; songwriter-guitarist-activist Peter Yarrow of Peter, Paul & Mary renown, and longtime Sesame Street host and recording artist Bob McGrath, accompanied by Grover, a resident Muppet. Though Harnick wrote the lyrics for “Fiddler” (touted as the world’s best-known musical that was performed worldwide and translated into several dozen languages from the Yiddish), he confided that he did not know the language: “When I grew up, to me Yiddish was the secret language.”

The evening honored Charlotte Frank, senior vice president of research and development for McGraw-Hill Education, a division of The McGraw-Hill Companies. Also honored was Sesame Workshop, the not-for-profit educational organization behind “Sesame Street” and some other educational children’s programs. Frank is the recipient of more than 60 awards for her achievements in education. Her responsibilities at McGraw-Hill include research, development and educational activities in the corporation’s financial sector that encompasses “Business Week” and “Aviation Week.” “Tonight is a wonderful evening for me,” she sad. Referring to the theater’s English and Russian supertitles at performances, she praised the Folksbiene “for doing what opera does… to attract [a larger] audience.”

Accepting the award on behalf of Sesame Workshop was Dan Victor, executive vice president of international strategy. He noted that the workshop’s offshoots are produced in arenas as diverse as Russia, South Africa, Brazil and Kosovo, “making a difference in the lives of over 120 million children in 120 nations…. We schep a huge amount of nakhas from Rechov Sum Sum, [which] continued to be part of Israeli culture for two decades. There is a generation of Israeli children who grew up with Sum Sum who are now parents themselves and have introduced their children to such favorite characters as Moyshe Oofnik… striving to help Israeli children and families find their commonalities and celebrate the diversity that is Israel today.… Like Sesame Workshop, Folksbiene understands the power of the media — in this case, the medium of live performance — [to] touch the human heart and soul.” Worthy of applause was the buffet: An elegant display of succulent fresh fruit — including stemmed strawberries the size of plums — as well as the beautifully presented, delectable dinner had the hundreds of guests raving. As they say in Yiddish, Men hot zikh balekt di finger — It was finger-lickin’ good.

Were it not for Zypora Spaisman, star of Israeli filmmaker Dan Katzir’s new documentary, “Yiddish Theater: A Love Story,” there might not be a National Yiddish Theatre-Folksbiene today. And were it not for Spaisman, my dying father, Matvey Bernstein, would not have survived in 1944 Uzbekistan, where Spaisman nursed him back to health (after which he was re-arrested for anti-communist agitation). The film should have been titled “Zypora Spaisman — a Yiddish Theater Love Story.”

Sequences of a frail 84-year-old Spaisman preparing a chicken meal for Katzir and tottering on subway steps do not reflect her “Mother Courage” persona, which for 40 years nurtured and kept the Folksbiene alive. Domineering and irascible, while acting she schnorred for funds, sold tickets and commanded that I attend opening nights. Katzir lovingly chronicles Spaisman’s travails during her final performance, a production of Peretz Hirschbein’s beloved play “Green Fields,” which she mounted in 2000. After parting with the Folksbiene and unwilling to go “gently into the night” as other theater folk do, Spaisman created the Yiddish Public Theater in an out-of-the-way space on Manhattan’s Lower East Side in the shadow of the old Forward building. Ignoring the empty seats, Spaisman and her talented can-do cast that included Shifra Lerer, Felix Fibich and lovely young Israeli actress Roni Neuman, invoked the mantra of “The show must go on!” And go on it did, till the money ran out and the curtain came down for her company. Too late for Spaisman, at the May 8, 2002, “Celebrating the Folksbiene Yiddish Theatre and 100 years of Yiddish Theatre” gala at Hunter College, George Pataki, then-governor of New York, presented the Folksbiene with a $200,000 check. As former New York City mayor Ed Koch and Lifetime Achievement in the Performance Arts recipients Kirk Douglas and Tony Randall looked on, master of ceremonies Eli Wallach presented Lifetime Achievement in the Yiddish Theater Awards to Mina Bern, Lerer, Lillian Lux, David Rogow, Seymour Rexite and — in absentia — ailing 86-year-old Zypora Spaisman, who died 10 days later.

At Spaisman’s May 22 funeral at the Plaza Community Chapel, master of ceremonies Joe Franklin told the packed room of mourners: “Of the half-million guests I’ve interviewed, only a few could come into my office unannounced: Michael Jackson, Al Pacino, Rosemary Clooney and Zypora.” Folksbiene regular **Hy Wolfe recalled the fights: “They were incredible! Chairs flying across the stage.… Actors storming out….Young actors with fear in their eyes… [but] they came back.”

Ben-Ami Spaisman spoke of his mother’s “magnificent obsession: A nurse in Poland, a midwife in Russia, in 1943, in her ninth month, [my mother] who had delivered 1,000 babies in a Russian work camp, got on a Russian troop train to deliver a friend’s son in a distant village. She then went into labor and gave birth to me… and then delivered the nephew of Menachem Begin!” A flashback to this aspect of Spaisman’s brio should have been in the film.

She was sensational in Sylvia Regan’s “Broome Street,” the Folksbiene’s 1985 production based on the original English-language play “The Morning Star,” originally starring Molly Picon and Joseph Buloff. In 1986, the Folksbiene’s 72nd season, Spaisman starred in Miriam Kressyn’s masterful Yiddish translation of Clifford Odet’s 1954 Broadway hit, “The Flowering Peach.” In 1992, Spaisman held center stage in the Folskbiene’s production of “The Crossroads,” and in 1994, with co-divas Bern and Lerer, she was the autocratic central character in the Folksbiene’s production of Jacob Gordin’s classic “Mirele Efros.” What a legacy! In the film, not a reference to any of her roles.

One of the film’s “talking heads,” Nahma Sandrow, author of “Vagabond Stars: A World History of Yiddish Theater” (Harper & Row, 1977) — my Yiddish theater “bible” — describes what I assume is the Israelis’ perception of Yiddish as “a language of the dead.” But with some four million speakers worldwide, that’s a bit premature to declare mameloshn’s rigor mortis.

Taking a page from cartoon character Chicken Little ,who frantically warned: “The sky is falling! The sky is falling!” the prediction of the demise of Yiddish theater dates back to 19th-century historian Leo Wiener, who predicted decades before its golden age, in the 1920s and ’30s, that Yiddish theater would survive in America for only another 10 years. In 1950, Maurice Schwartz’s Yiddish Art Theater closed. On October 23, 1956 Variety ran a piece: “Yiddish Theater Barely Alive.” David Lifson, in his 1965 book “The Yiddish Theatre in America,” writes, “Yiddish drama cannot be confined to parochial nationalism, dismissed as a dying transient culture… the universality of this art continues to manifest itself in the American theatre, of which it was a significant part.” (Note the past tense.) In his December 16, 1973, article, “Yiddish Theater Lives — Is That an Illusion?” Irving Howe describes “Sholom Aleichem’s” classic play “Hard To Be a Jew” as “creaky,” yet notes that its star, Buloff, [and] “also Miriam Kressyn, Zvee Scooler, Jack Rechtzeit… for a few moments manage to create an illusion through the sheer will of their aging bones that the Yiddish theater is still alive and well.” Murray Schumach, a self-described “longtime fan of Yiddish Theater,” writes in “The Yiddish Theater Refuses To Die,” his December 7, 1980, New York Times piece, “The Yiddish theater has survived pogroms, exile, poverty, religious opposition from its own people and internal warfare.” And finally, the subtitle to my own June 21, 1985, article in the Forward, “Taking the Temperature of the Yiddish Theatre,” prognosticated, “The patient is holding his own.” Taking a cue from the film “Field of Dreams” — “If you build it, they will come” — hopefully the Folksbiene’s new “keepers of the flame” will remember Spaisman’s heroic struggle to keep Yiddish and the Yiddish theater alive. And hopefully — instead of the “once there was” premature film obit-tributes, some filmmaker, somewhere, will bring to the screen a more optimistic vision of Yiddish and the Yiddish theater.

Professor of Yiddish David Katz (another Katzir “talking head”), homed in on something I found particularly significant. “Cultures on the way out provide a kind of [odd] humor because the words, the sounds, the phrases are identified with a funny old generation.” This may explain such abominations as the recent “hot” mini-book “Yiddish for Dogs” by Janet Perr (Hyperion), in which the author gives dogs such Yiddish names as Gonif (thief), Mishuggeh (crazy), Vontz (bedbug), Farshtunken (stinky/smell) Tuchus (rear end), Drek (garbage, junk and, to some Jews, fesces) and Goyim (gentiles). What about a dog called Yidl (little Jew)? I know, some find this stuff funny. Makes Jews who do not speak Yiddish laugh. Makes “goyim” think they understand Yiddish and where their Jewish friends come from. Makes some of us cringe. Sells lots of books. Imagine a similar book published by some antisemitic skinhead group.

That’s why it is important that the National Yiddish Theatre-Folksbiene thrive — not only as entertainment but also as a custodian of a Yiddish and a culture that rises above the crowd and the gutter.