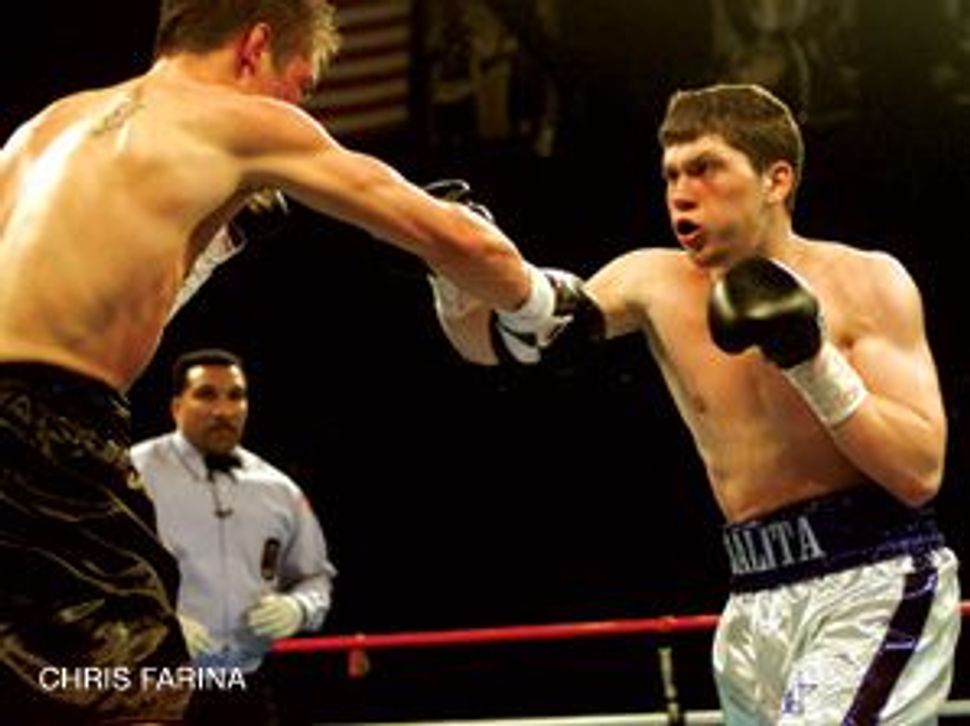 In the Ring: Dmitriy Salita, right, shown here with Ryan Maraldo, is the subject of the new documentary film, ?Orthodox Stance'

The era of Jewish boxers — tough guys from the ghettos, like Benny Leonard and Barney Ross — is over. For that matter, the era of boxing itself, once king of all American sports, has passed, as well. In that regard, Dmitriy Salita is doubly a throwback, being both Jewish and a boxer, with an added twist: As a practicing Orthodox Jew, he does not fight on the Sabbath. What normally might be a potentially fatal limitation for a boxer (many fights are scheduled for weekend nights) has proved to be a public relations bonanza for this undefeated junior welterweight, now the star of Jason Hutt’s documentary film “Orthodox Stance,” opening January 25 in New York and April 11 in Los Angeles. 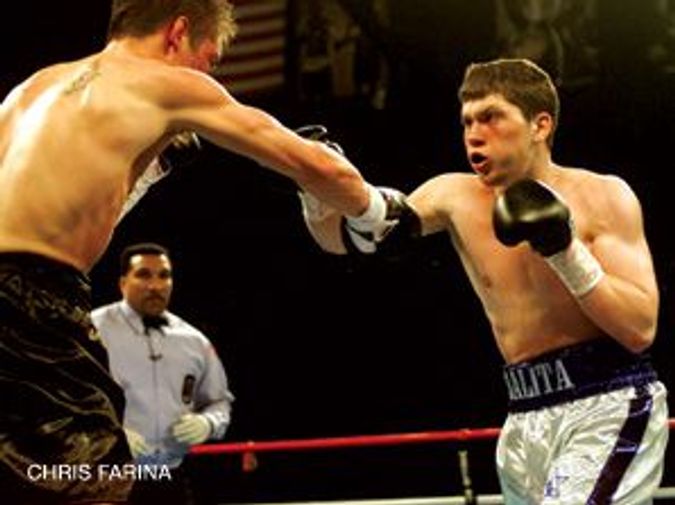 In the Ring: Dmitriy Salita, right, shown here with Ryan Maraldo, is the subject of the new documentary film, ?Orthodox Stance'

In addition to boxing, Salita, 25, is something of a juggler, balancing his sincere commitment to Chabad Orthodoxy with his training regimen, and the relative looseness of the sporting world with the stringency of religious practice. Having lost his mother when he was a teenager, the immigrant from Ukraine took refuge in boxing, and in the welcoming arms of Chabad. As it turns out, the worlds are closer than they initially appear: The boxer’s religious minder, Israel Liberow (who travels with Salita, cooks his kosher meals when the two are on the road and gives him the priestly blessing before each fight), is a closet fanatic of the sweet science, and each bout is torment for him, bobbing and weaving with each jab and hook as if he, and not Salita, were in the ring.

Salita — pale, baby-faced, his cheeks still ringed with acne — makes for an unlikely-looking fighter, but any discomfort he projects in the course of daily life instantly vanishes in the ring, where he morphs into an agile, lithe warrior. Hutt’s film is not always clear on the details of religion or of boxing; it never explains how Chabad differs from mainstream Orthodoxy, nor does it so much as hint that Salita switching promoters, to Lou DiBella from the legendary Bob Arum, might be anything other than a positive development. What it does do is capture the restless energy of Salita, comfortable at 770 Eastern Parkway in Brooklyn’s Crown Heights and in the hip-hop-heavy culture of boxing. Salita drives the streets of Brooklyn bobbing his head to Matisyahu, and when the black-hatted reggae star makes an appearance at one of his fights, the two Orthodox men bump chests. “You’re representing, D.!” Matisyahu says. Orthodox Judaism co-opting aspects of hip-hop culture and making it its own; two Chabadniks completely comfortable in worlds defined and dominated by black men. Only in America, folks.

“Orthodox Stance” lacks any of the pizzazz that Salita shows in the ring — one wishes that the film itself would get up on the top rope and pump its fist occasionally — but it provides an ideal opportunity to watch another unlikely, Chabad-fueled star in action. It is also a testament to the possibilities of American life; as Salita’s Chabad rabbi points out, Salita’s belief in the promise of his newfound country is what convinced the boxer that being Orthodox was no contradiction in the first place. Salita’s next fight is in New York City on February 28.

Saul Austerlitz is a regular contributor to the Forward.