Auschwitz Jewelry Exhibit Shows Secret Treasures With a Grisly Past 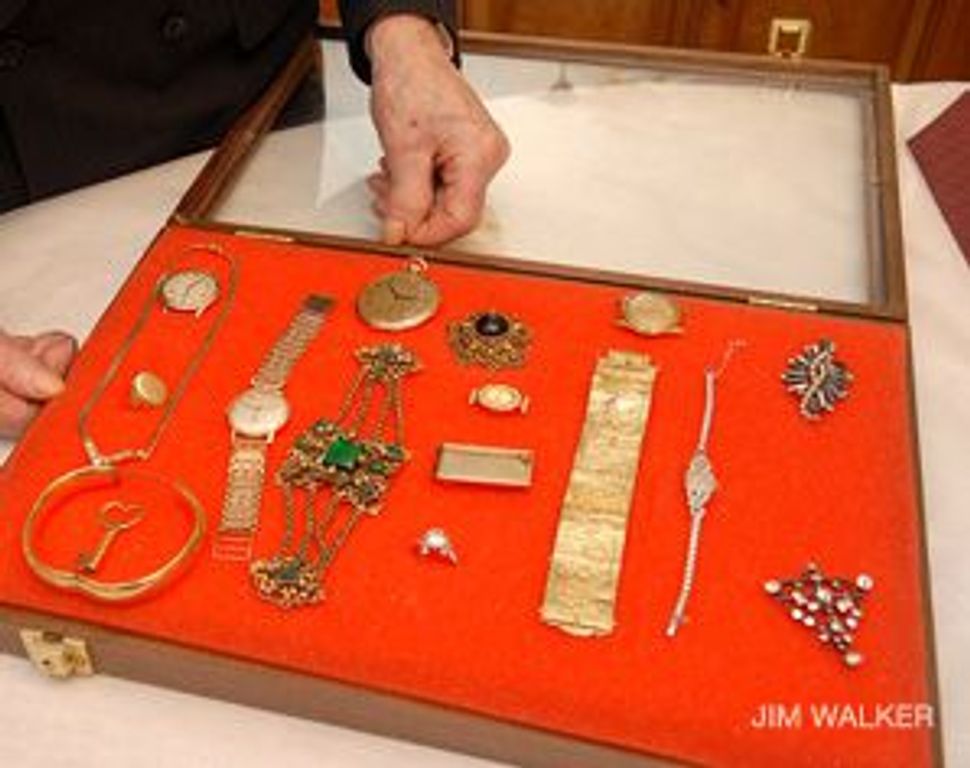 Hidden Collection: Items of Jewlery found among the clothing of Auschwitz inmates and long hidden by a camp survivor are on display at a Massachusetts museum.

Watertown, Mass. – After sitting in the darkness of an attic for nearly 60 years, an unusual jewelry collection made its sparkling debut in a museum here last weekend. 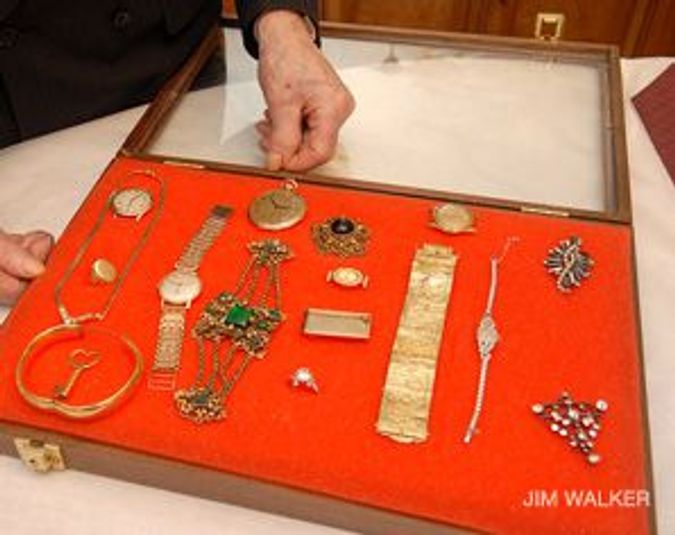 Hidden Collection: Items of Jewlery found among the clothing of Auschwitz inmates and long hidden by a camp survivor are on display at a Massachusetts museum.

The 13 pieces — including an elaborate gold-and-emerald bracelet and diamond-and-sapphire brooches — earned their place in the museum not because of their value, but because of the journey they have been through with their protector, Meyer Hack.

Hack was deported to Auschwitz at age 27, in 1941, and was assigned to work in the Bekleidungskammer, the area where the clothing of inmates was taken before the inmates went to the gas chambers. During his four years in the camp, Hack periodically found jewelry in the clothing of dead inmates. He squirreled it away and, after surviving the camps, hid the collection in his attic.

Now, at age 92, he has decided to show his jewels to the world. Last Sunday the exhibit was unveiled at the Armenian Library and Museum of America, here in Watertown. In a few months they will move to the Yad Vashem Holocaust memorial in Israel.

The jewelry has a macabre aura to it, coming, as it did, from the deaths of fellow Jews.

“It’s part of the loot, part of the process whereby the Jews paid for their own destruction,” said Stephen Feinstein, director of the Center for Holocaust and Genocide Studies, University of Minnesota.

But Feinstein and other Holocaust scholars say that the remarkable thing about Hack’s story is how he turned this loot into a tool for survival — against the Nazis.

“To steal from the Nazis is nothing less than a mitzvah,” said Michael Berenbaum, director of American Jewish University’s Sigi Ziering Center for the Study of the Holocaust and Ethics.

Hack seems aware of the ambiguities of his story. He speaks openly about his general experiences before and during the war. His family came from Ciechanow, Poland, where his parents were merchants. After his deportation to Auschwitz, his mother and two sisters were murdered in the camp.

Hack now talks about how his defiance helped him survive the concentration camps. He used to keep a string tied around his neck, and he would it pull during roll call to make blood rush to his face — thereby camouflaging his jaundice.

“I outfoxed them. They couldn’t kill me,” Hack told the audience at the January 20 event during which his jewelry was unveiled at the Armenian museum.

But the pride in survival does not erase the complicated relationship that Hack has with the valuables. Since coming to America with his wife, a fellow Auschwitz survivor, Hack kept the jewels and their story to himself until two years ago. He himself was a jeweler, but he had a sense that the pieces from Auschwitz were not his.

“Meyer always stressed these pieces never belonged to him, yet they became very precious to him,” said Dean Solomon, Hack’s close friend for 30 years and the first person Hack told about the jewels.

Indeed, Hack is hesitant to speak forthrightly about the jewelry. He refuses to answer direct questions about why he collected the pieces and what he knows about who originally owned them.

“I grabbed it from under the Gestapo’s nails,” Hack told the Forward. “When I took these valuable things, my life was on a thread.”

Most of the answers on this count come from Solomon, whom Hack approached in early 2006 and said: “I’m going to tell you something shocking. Are you in, and will you stay in?”

According to Solomon’s telling, Hack hid his findings from the Nazis by burying them behind the barracks of the Bekleidungskammer. Hack sewed the jewelry into a support stocking and wore the pieces on the march to Dachau in 1945, but then had to find another hiding place for the collection. The cache was given to a fellow prisoner and acquaintance from his hometown. The items were later returned to Hack — with some missing.

But Solomon says that there is still much that he has not been able to get out of his friend. Did he want to protect the jewelry, or did he hope it could save him? Did he feel it was his responsibility to take it from the Nazis, or did he feel guilty for doing so?

“I have a theory that I feel answers a lot of these questions,” Solomon said. But, he added, “I can’t claim it’s true.”

Susie Davidson, who chronicled Hack’s story of survival in her 2005 collection of Holocaust accounts, and who organized the Boston-area event, says she has come up with her own theories.

“Knowing Meyer, I think he likes to have a little sense of power, that he’s special, since he was so dehumanized by the camps and the Nazis,” Davidson said.

Now that the objects are appearing in museums, it is possible that the debate can move to a more public forum. One possibility is that a former owner could make a claim for one of the pieces — though Holocaust experts say this is unlikely.

“Unless these are utterly unique things, there is absolutely no way to track down who those things belonged to,” said Deborah Lipstadt, the Dorot professor of Modern Jewish and Holocaust studies at Emory University. “Well over 1 million people went through [Auschwitz] from all these different countries.”

Yad Vashem, which will soon house the collection, did not respond to requests for a comment from the Forward. But Haviva Peled-Carmeli, director of the artifacts department at the museum, wrote to Hack in 2006, expressing enthusiasm about the collection.

“[I]tems such as you have described that are directly related to those who perished in Auschwitz are the most valued of the artifacts, and we think that it would be most appropriate to have them here in Jerusalem, the heart of the Jewish people,” Peled-Carmeli wrote.

Auschwitz Jewelry Exhibit Shows Secret Treasures With a Grisly Past