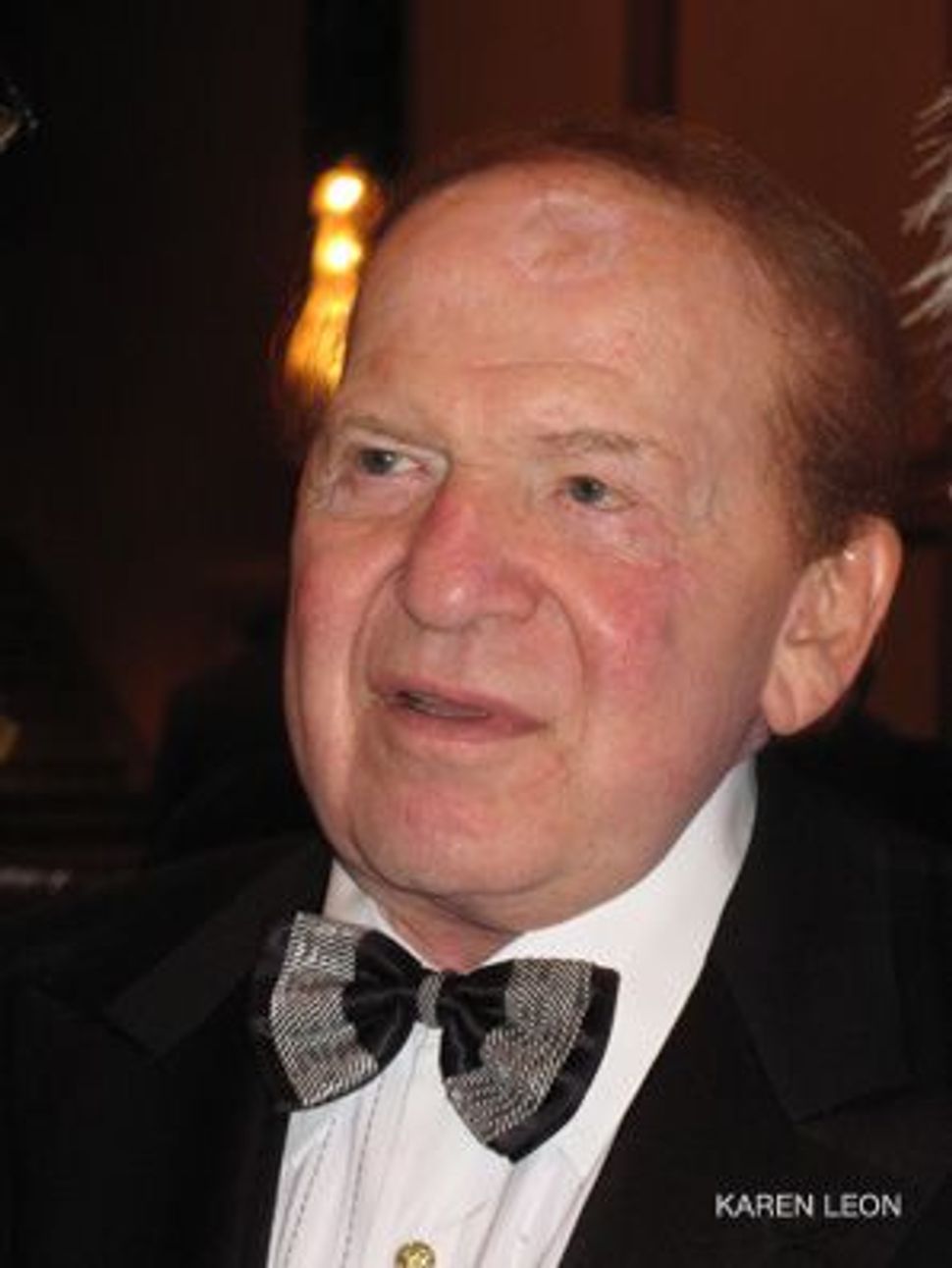 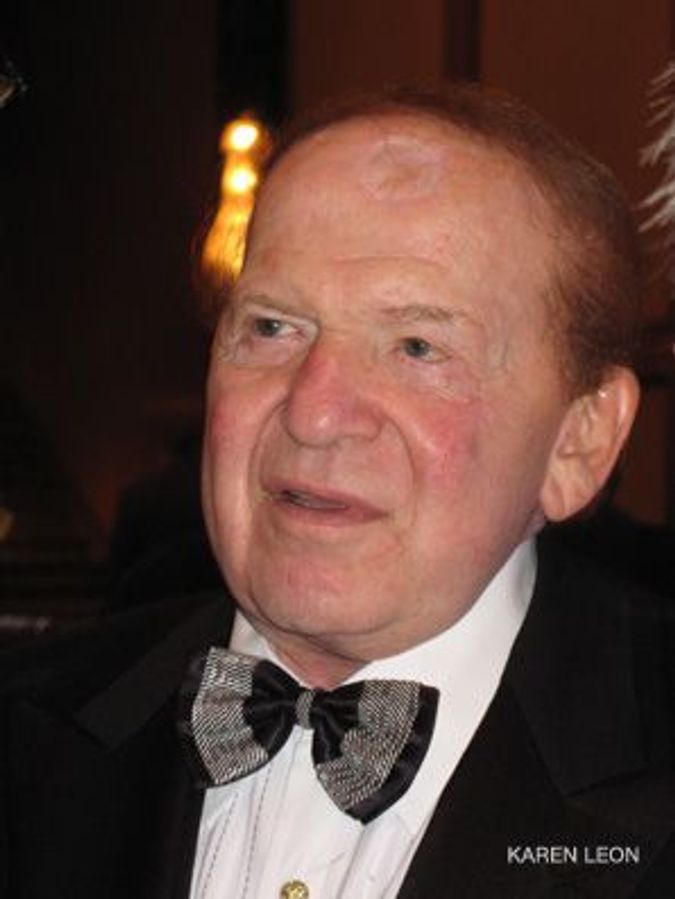 Casino mogul billionaire Sheldon Adelson may be ranked as the third richest American by Forbes 400 — behind Warren Buffett and Bill Gates — but at the December 11 Birthright Israel Foundation dinner, which honored him and his wife, Dr. Miriam Adelson, he was, as they say in Israel, misparechad — number one. Holding court at table six at the Hilton New York’s ballroom, Adelson, noted for his largesse to Israel, chatted with philanthropist Edgar Bronfman Sr., as Birthright alumni came by to thank him for his support, and friends and admirers sought his advice and assistance for their venues.

Event chair Susan Gelman described the Weidners, Bill and Lynn **, “who are instrumental to the success of [Adelson’s] Sands Corporation,” as a Birthright family. “I’ve always had a great respect for Israel and the Jewish people… which has increased through working with Sheldon and Miriam,” said Bill Weidner, who informed that his “Birthright alumni sons, **Alex and James, “had been raised with respect and appreciation for their mother’s Jewish heritage… that was intensified as a result of their trip to Israel.” “More young people have traveled to Israel on our trips than ever before,” Gelman noted. “Just take a look around the room at the scores of young alumni [who are] among the 150,000 young Jews who have been on our trips.” Gelman added, “The $2.6 million raised this evening translates into 1,000 additional Birthright Israel participants.” A captain of the Israeli Air Force, a Birthright alumnus — who, for security reasons — must remain anonymous — felt that the essence of his experience was the realization that “being Jewish is more than just a religion; it’s a collective history, a culture, a set of values, a community and a group of people which I am proud to call my family and friends.… Home isn’t necessarily where you live but where you belong, and are always welcome — Israel.”

Among their many projects, it was noted that Adelson and his Tel Aviv-born, blond knockout wife (whose father was a Holocaust survivor) have established, in Tel Aviv, the Dr. Miriam Adelson and Sheldon G. Adelson Clinic for Drug Abuse and Treatment and Research. The text of Miriam Adelson’s bio states that she started the clinic to help “prevent the spread of HIV before it reached the epidemic levels [she had witnessed] in New York.” In addition to her involvement in a similar clinic in Las Vegas, Dr. Adelson has authored numerous scientific papers about the effects of drug addiction (heroin, alcohol, etc.) on the human immune system. She continues to serve on the faculty of Rockefeller University as a guest investigator. Adelson’s Las Vegas Sands holdings — which include the Las Vegas Venetian Resort Hotel Casino — have now been magnified by his latest creation, the Las Vegas Palazzo, the world’s largest hotel with 7,200 rooms. A visionary in the gambling arena, Adelson is currently building 13 hotels in Macao, where he already has two casinos.

In his first one-man hit Broadway show, which opened in 1987, Jackie Mason asked, “Why are there no cockroaches in gentile homes?” As the audience held its collective breath, he explained: “There is nothing to eat. And how much can a cockroach drink?” Those who were not appalled roared with laughter. It was a take on an old Yiddish song, “Shiker Iz a Goy” — drunk is a gentile — a song and model that needs to be sequestered to the archives, since alcoholism is now as much a Jewish affliction as it is a plague of the population at large. But the revelation that there now exist a significant number of Jewish female alcoholics and drug users was a shocking eye-opener at the recent symposium and launch of the 2007 book “Jewish Sisters in Sobriety,” sponsored by the Jewish Women’s Foundation of New York and held at UJA-Federation’s headquarters. The dialogue was moderated by Emmy award-winning journalist Connie Collins, who, it was noted, “comes from a long line of alcoholics, including her father, grandfather, and several uncles. Her 25-year-old daughter is a recovering alcoholic.” Introduced by their first names only, three women — whose bios appear in the book — had many among the 120 present teary-eyed by the time they finished their stories.

Some 26 years ago, the life of then 25-year-old Lisa was on the verge of total collapse. The only thing that had any meaning was where to get the next drink or drug. After a year of trying to stay clean and sober, she was directed to an organization that helps Jews in recovery. Ten years ago, Lisa became a volunteer at the teen network of Jewish Alcoholics, Chemically Dependent Persons, and Significant Others. With her husband, who has been at her side for 30 years, she now has two sons and has built a practice as a learning specialist in Brooklyn. Sarah recounted how, during her early teenage years, she had been consumed by drugs. Unable to attend school, she dropped to 65 pounds in her first six months of drug abuse, which led to depression and sleeplessness. Thanks to JACS’s Teen Network, her life was turned around. Today she is drug free. Finally there was Tali’s story. Born and raised in a Modern Orthodox Jewish home in Montreal, Tali believed that all her troubles stemmed from the fact that she is a middle child. Growing up in the 1960s, she managed to cope with drugs and alcohol. She wanted to end her life, and she’d curse God every morning that she woke up. After meeting a co-founder of JACS, her route to recovery evolved with the understanding of “a loving and all-forgiving God, not the punishing, vengeful God of her mother’s understanding.”

The first of its kind, “Jewish Sisters in Sobriety” was made possible thanks to a grant to JACS from JWFNY, a program of the Jewish Board of Family and Children’s Services. The book contains a number of profiles, including one of Lillian Roth, that famous 1930s Jewish alcoholic. Roth’s autobiography (translated into 18 languages) became an Academy Award-winning vehicle for film star Susan Hayward, in the role of the downward-spiraling singer-actress. Among the autobiographical stories profiled in the book were startling entries: “I attended a Bar Mitzvah last week and I was ashamed to touch the Torah. I felt a triple shonda (stigma) in that I am a female, and a Jew and an alcoholic.” There was a revelation from a woman beaten by her father; an adult child of Holocaust survivors who had to deal with her husband’s addiction, and a raped and abused Sephardic woman who found solace in drugs and alcohol before finding healing and recovery. Among the symposium speakers were Naomi Altschul and Naomi Lazarus, JWFNY event co-chairs; Jonathan Katz, director of the Rita J. Kaplan Jewish Connections Program, and Sylvie Sherman-Bloch, a member of the JACS council.