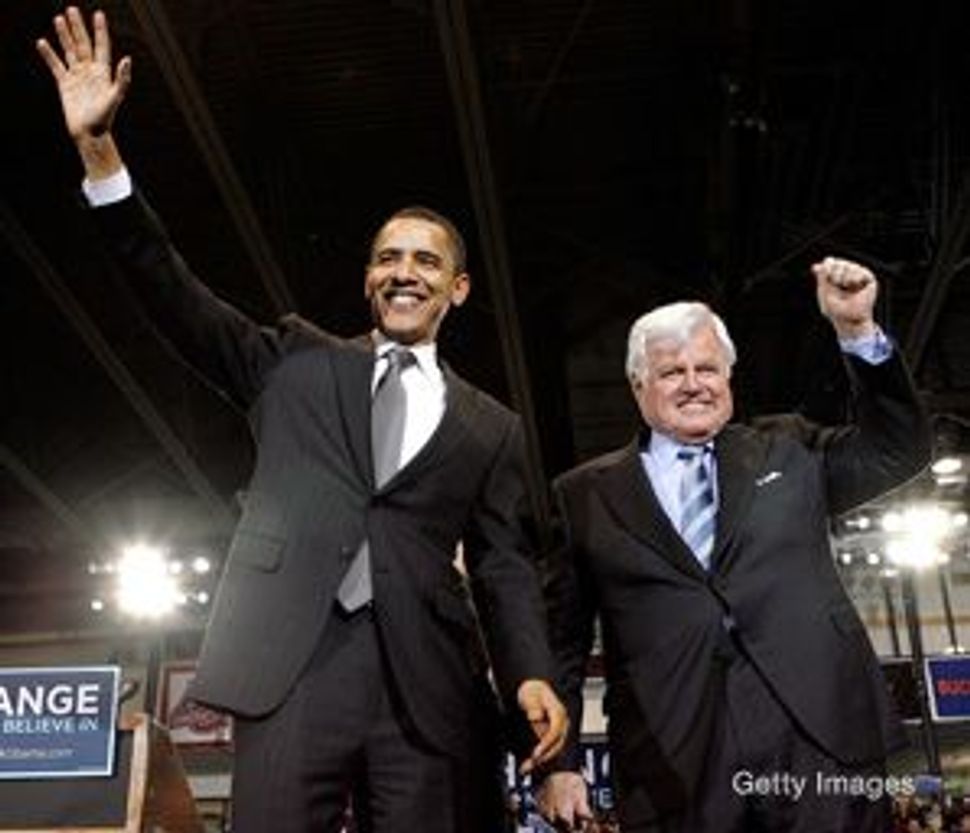 Brother in Arms: Obama spoke with Jewish Reporters minutes before he was publicly endorsed by Senator Ted Kennedy on Monday.

Mere minutes before he was inducted into Camelot, Democratic presidential hopeful Barack Obama shifted his attention from the Kennedy clan to the Jewish tribe. 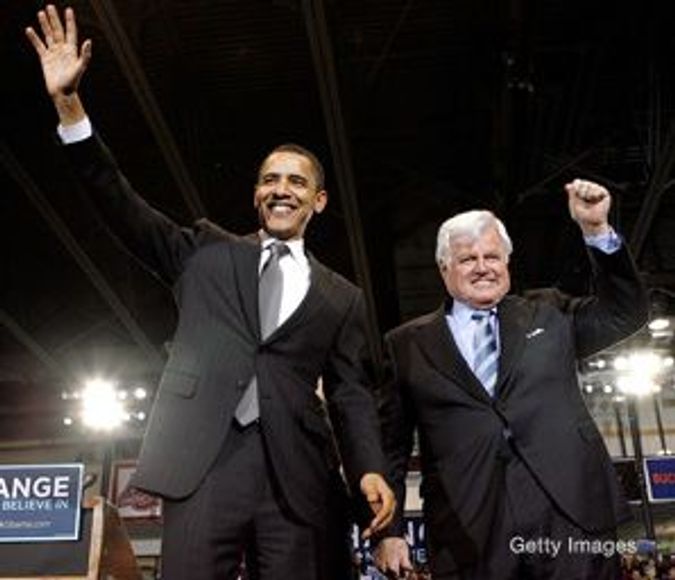 Brother in Arms: Obama spoke with Jewish Reporters minutes before he was publicly endorsed by Senator Ted Kennedy on Monday.

Immediately prior to accepting the endorsement of Senator Edward Kennedy on Monday afternoon in Washington, Obama conducted a conference call with Jewish reporters in an effort to dispel concerns on a number of issues, including his approach to the Israeli-Palestinian conflict and the views of his longtime pastor.

The timing of the call underscored a concerted attempt to capture Jewish voters in the run-up to the Super Tuesday primary contests. While some polls have shown Senator Hillary Clinton of New York ahead in 20 of the 22 states that will vote on February 5, Obama’s boost from the Kennedy endorsement and from his overwhelming win in South Carolina on January 29 have cemented his status as a serious contender for the nomination. In the face of this unexpectedly competitive campaign, Jewish voters in the Super Tuesday states — which include New York, New Jersey, California, Illinois, Massachusetts and Connecticut — are now finding themselves tasked with needing to weigh Obama’s candidacy more carefully than ever.

In recent weeks, even as the organized Jewish community has publicly combated a series of scurrilous personal falsehoods, more delicate questions about his views on the Middle East have animated Jewish leaders, spilling on to the pages of newspapers and into discussions among voters. Despite repeated efforts to reach out to the community — including the recent mobilization of some of his prominent Jewish supporters, such as Lee Rosenberg, a board member of the American Israel Public Affairs Committee — doubters have continued to make noise.

“The concern in the back of my mind is, ‘Is he going to be the next Jimmy Carter?’” said one prominent Jewish Democrat who spoke with Forward on the eve of the primary in New Hampshire, as he was grappling with the seeming implosion of the Clinton campaign. Emphasizing that he planned to support whoever became the party’s eventual nominee, the Democrat said he was uneasy about Obama’s emphasis of dialogue with Iran.

Spurred by the same concern, last week the former Israeli ambassador to Washington, Danny Ayalon, raised his voice in The Jerusalem Post, in an article titled “Who Are You, Barack Obama?”

Such comments have frustrated Obama aides, who complain that the candidate has repeatedly clarified the various issues about his personal connections as well as his policy positions, but that these efforts seem to gain little traction against the power of rumor and innuendo. Nevertheless, those efforts were made once again in this week’s conference call.

During the call, Obama argued that a magazine affiliated with his pastor’s Chicago congregation, the Trinity United Church of Christ, had “made an error in judgment” by awarding a prize to Nation of Islam leader Louis Farrakhan in November 2007.

“I have always denounced the abhorrent antisemitic views of Louis Farrakhan,” Obama said. He noted that he had spoken out against antisemitism in the black community for decades, including during a recent appearance at Atlanta’s Ebenezer Baptist Church on Martin Luther King Day.

He also reiterated many of his longstanding pro-Israel positions, including the need for Hamas to recognize Israel’s right to exist as a precondition for talks, and his rejection of a literal Palestinian right of return. Asked about the peace process, Obama said the Palestinians had the responsibility to tamp down on violence before Israel made substantial concessions.

Palestinian leaders have to “get a hold of their security apparatus, to be able to crack down on terrorist activity, to root out the corruption,” he said. “Until the Israelis have some confidence that whatever is negotiated will actually be followed through on, I think it’s going to be difficult.”

When asked about his previous statements emphasizing the need for diplomatic engagement with Tehran, the senator first reaffirmed his understanding of the threats posed by the Iranians.

“Iran’s possession of nuclear weapons would not only be a threat to U.S. interests and destabilizing to the region but would also be an extraordinary threat to Israel,” he said, noting Iranian President Mahmoud Ahmadinejad’s Holocaust denial and his expressed wish that Israel did not exist. But Obama said that incentives, along with deterrence, are needed to deal with the regime.

“I also think we should be presenting carrots,” he said. “The key is to give Iranians incentives to behave differently.” The unwillingness to talk, he said, “empowered extremists like Ahmadinejad.”

These remarks came on the heels of other steps taken to underscore his support for Israel in the past week. On January 23, the senator sent a letter to Zalmay Khalilzad, the U.S. ambassador to the United Nations, calling upon him to ensure that any response to the recent unrest in the Gaza strip will not be biased against Israel.

It remains to be seen how these remarks and others will play in the Jewish communities next Tuesday. In the only two contests with significant blocs of Jewish voters thus far, Nevada and Florida, exit polls showed Clinton capturing the lion’s share of Jewish voters in both.

Nevertheless, Obama has won backers from somewhat unexpected quarters. Martin Peretz, the hawkish editor-in-chief of the New Republic, endorsed Obama through his blog, The Spine, on January 25. Though motivated in large part by his well-known distaste for the Clintons, Peretz said he had been impressed by Obama’s “almost poetic vision and disciplined mind.”

“I don’t really know him, so whatever I think about him is not inside dope,” said Peretz, who added that he had spoken with Obama privately about six months ago, in a meeting arranged by intermediaries. Peretz added that he trusts Obama far more than Clinton with the security of Israel, and believes him to be more skeptical than Clinton of the “Palestinian capacity to really come to an agreement that they will enforce.”

“I think with Hillary, like a lot of politicians, it’s a matter of ingenuity,” Peretz said. “Obama is asking the better question: ‘Are the Palestinians really ready?’”