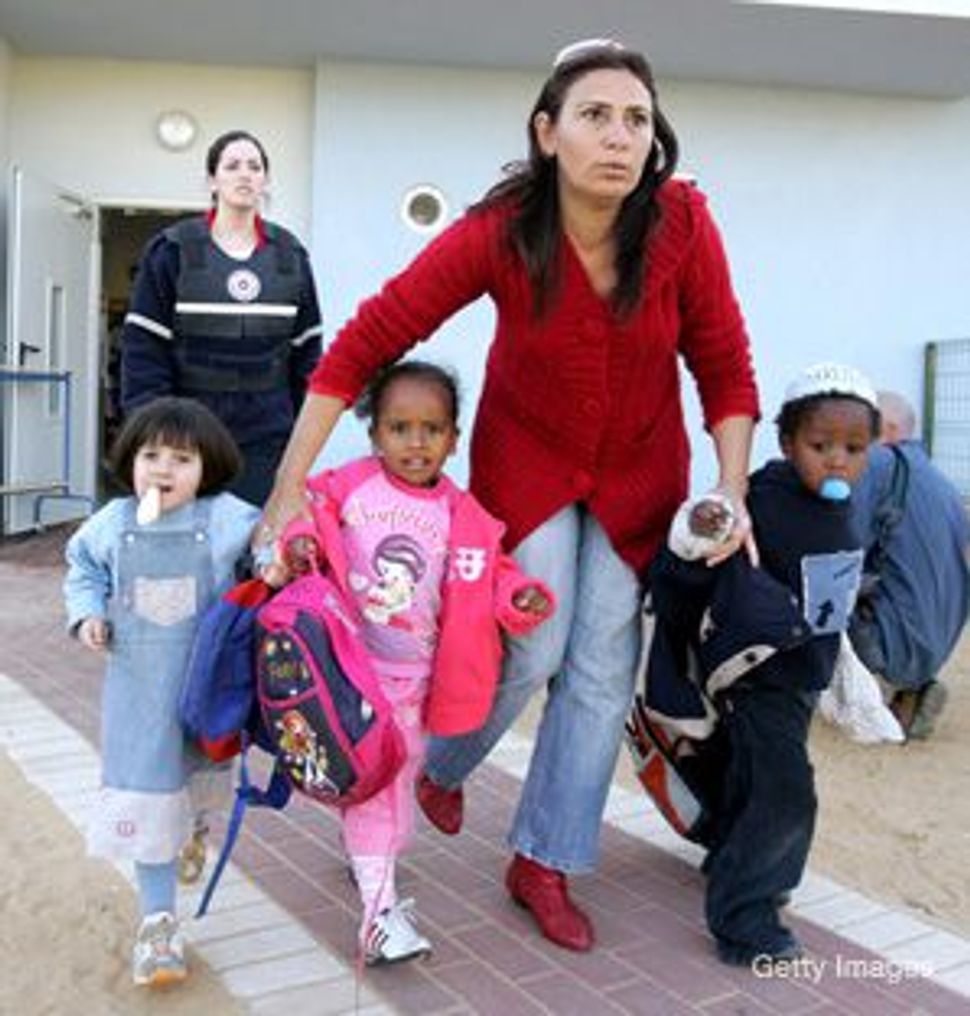 Running for Cover: In Sderot, where rocket fire from the Gaza Strip is a fact of everyday life, residents are often forced to improvise. Above, a school is evacuated during a recent attack.

Free to play the very latest educational computer games on state-of-the-art laptops, the 33 children at Eshel kindergarten would appear to be some of the luckiest around. With Eshel’s teachers able to use a townwide wireless network to plan programs using all the resources the Internet has to offer, the school is among the most high-tech kindergartens in Israel. 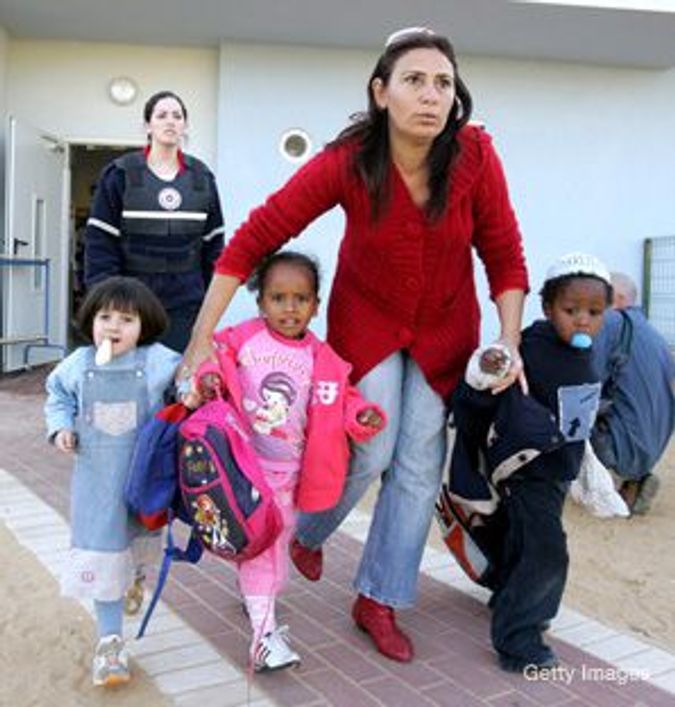 Running for Cover: In Sderot, where rocket fire from the Gaza Strip is a fact of everyday life, residents are often forced to improvise. Above, a school is evacuated during a recent attack.

But it would be hard to fault Eshel’s pupils for not considering themselves particularly lucky. The computer system was set up to compensate for the fact they are rarely able to enjoy the simplest pleasure of childhood: playing outdoors.

Such is the lot of students in Sderot, the Negev town that each week is pounded with dozens of rockets from nearby Gaza.

Since Qassam rocket attacks became a part of regular daily life last May, most schools in Sderot have been forced to relocate in search of improved bomb shelters. In their new facilities, which are often general-purpose communal buildings, children are constantly kept on the ready to go down to shelters. Letting them outside to play has, as a result, become a risky endeavor.

“They go into the shelter and wait for the ‘boom,’” Assido said. “It is very hard. They end up spending a tiny amount of time outside. If we take them out, they need to wait turns and go for short bits of time in small groups” so that they can be brought in quickly when rockets fall.

The classroom computers came as a response to the challenge of keeping students entertained in an environment where normal childhood games are out of the question, not just during the time spent in often-cramped bomb shelters but also during the long hours spent at indoors at school.

“Because of the situation, people here can’t lead normal lives,” said local activist Shimon Edry, an Internet consultant who played a lead role in establishing Sderot’s townwide wireless network. “Small kids are stuck in their kindergartens. Computers with the Web are a way of bringing the outside in, giving them access to resources and films.”

Last July, Edry resolved to make Sderot the first town in Israel entirely connected to a wireless network, after recognizing that the Internet’s educational tools would again be denied to students if the kindergartens were forced to relocate. He was also inspired to act by the plight of the local Sha’ar Hanegev elementary school, which on government orders has been displaced since September to caravans in a kibbutz seven miles from Sderot while its premises are being bomb proofed.

“We needed to teach computers, but had no network connection,” said Anat Regev, the elementary school’s head teacher.

In stepped Edry, who began work on setting up a network along with Internet firm 012 Smile Communications, wireless systems manufacturer Alvarion, computer firm Intel and Israel’s Communications Ministry. The result was a WiMAX network — a stronger equivalent of the more local Wi-Fi network found in many airports, cafés and other public spaces — that covered all of Sderot, as well as a deal that gave kindergartens free laptops and software. The system also connects the Sha’ar Hanegev elementary school to networked resources on the intranet at its high school, from which it was severed by the relocation in September.

The WiMAX network is currently reserved for educational establishments but could potentially be rolled out to the general public, according to 012 Smile Communications’ business manager, Amir Sagi.

“This place has become known for its rockets,” Sagi said, “but we want to give it a positive claim, too: the claim that it is the most high-tech city in Israel.”