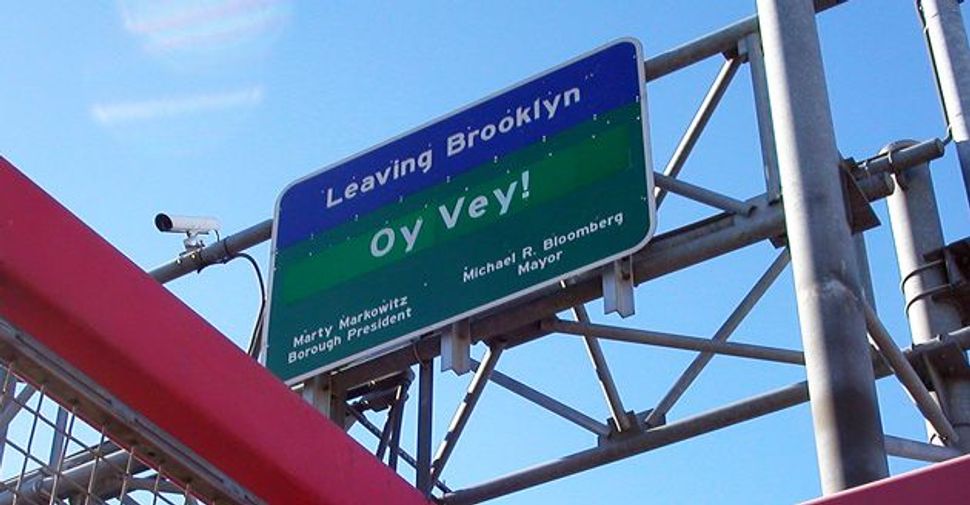 Oh, to use “appetizing” as a noun! Oh, to remember sunny summers spent splashing on the beach at Coney Island. Oh, to have a knish do for me what a madeleine did for Proust — unleash a torrent of memories, except instead of tortured and French, mine are warm and borough based. A violin fiddles in the background; Mayor Ed Koch plays the role of Tevye. Oh, to have been born a New York Jew!

Sure, I’m happy enough to have been born a suburban Chicago Jewess. But right after college I moved to New York — Brooklyn, actually (for the accent!) — convinced then, and to this day, that there is just something more Jewish about New York Jews. Something ineffable, enviable. But is it true? Are New York Jews the chosen chosen? Or am I just a self-hating Chicagoan? And while we’re at it: How can one Jew be more Jewish than another Jew, nu?

“Most Jews feel that someone else is more Jewish than them,” a reassuring Rabbi Irwin Kula said when I confessed my New York complex. “I can’t tell you how many people come up and tell me, ‘I’m not — something.’” Usually they worry they’re not religious enough, said the rabbi, who is president of CLAL — The National Jewish Center for Learning and Leadership. But my problem, he discerned, is that I don’t feel ethnic enough.

That’s exactly it! Where I grew up there were plenty of Jews, but for better or worse, no one has ever dubbed suburban Chicago “Hymietown.” In New York, Jews are practically born in borscht. From babyhood they’re swimming in ethnicity, from bagel stores to Brooklyn’s Boro Park to Broadway — so much that they don’t even notice. And they’re always just a subway ride away from Manhattan’s Lower East Side, our ancestral gateway to America.

“I do think of New York as the ‘homeland,’” Doreen Orion said. “Russia and Poland — not so much. I’ve never been there, and my grandparents didn’t exactly get a warm send-off.”

A New York-raised Jew, and author of the travel memoir “Queen of the Road” (Broadway, 2008) Orion recently visited Israel, where friends told her she’d feel at home instantly.

She didn’t. At all. “New York Jews and Israelis are totally different animals,” Orion said. “But the falafel was amazing.”

The falafel almost proves her point: Israel is a modern country filled with Jews who have adapted to the Middle East. They left behind their old names and some of their old recipes, too. What could be less Orchard Street?

When I asked him his views on New York Jews, author Douglas Rushkoff wrote in an e-mail, “In my book, ‘Nothing Sacred: The Truth About Judaism,’ (Crown, 2003) I [say that] many American Jews consider Israel the heart of Judaism. They write checks to Israel where they assume the ‘real Jews’ are doing whatever real Judaism is.” He went on: “But people in New York City don’t have quite that problem, because we see our own city reflecting Jewish values. New York is where European Jews came not just during the Holocaust, but during every holocaust.”

With so many Jews so eager to resume their uprooted lives, a great miracle happened here: Rather than Jews becoming assimilated to New York, it went the other way around: New York assimilated to the Jews. That’s why comedian Lenny Bruce could declare: “It doesn’t matter, even if you’re Catholic. If you live in New York, you’re Jewish. If you live in Butte, Montana, you are going to be goyish if you’re Jewish.”

“I think it’s the concentration that allowed Jews to shape a certain part of New York life,” social media consultant Elaine Bloom said. “The way things slow down around the Jewish holidays. The way every coffee shop offers matzo during Passover. The way so many people who are not Jewish understand a few Yiddish words, and use them.”

“My Italian neighbors in Queens knew that the best thing to bread fish with was matzo meal, so they’d come over to borrow some if they ran out,” said Rabbi Michael Shevack, who has since relocated to Pennsylvania. In New York, “your identity as a Jew and your identity as an American were fused, and you couldn’t get that elsewhere.”

Aha! That is the identity I always craved: The one where Jewishness and Americanness — and funniness and a certain pushiness and love of fatty meat — all got blended together. And crazy or not, I’ve spent my adult life stuffing myself with that mixture, like a human kishke.

I’m writing for the Forward, right? I go to a synagogue where they serve herring. My sons are named Morry and Izzy! Come on — mah-jongg may still elude me, but does that mean I am forever to remain a mild-mannered Midwest miss? “Fuhgeddaboutit!” as they say.