Arson Attack on a Synagogue of Peace 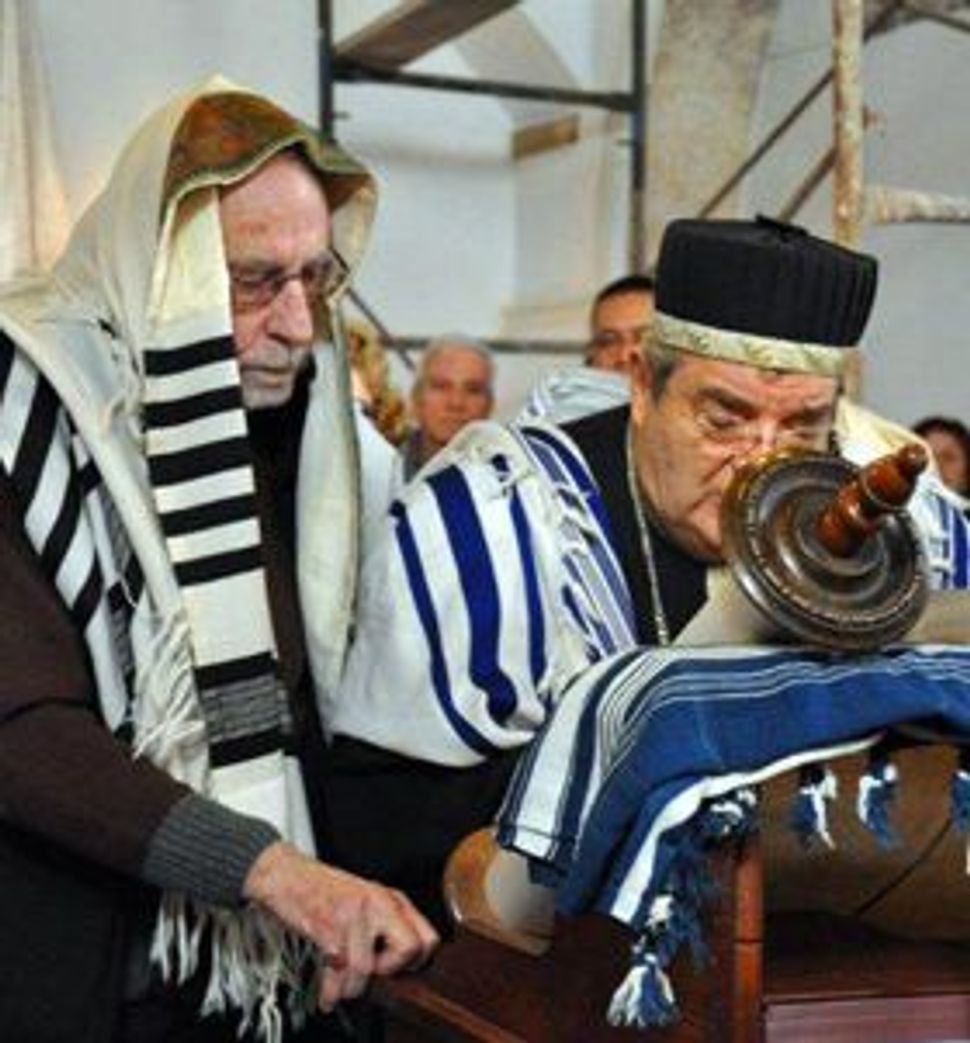 After the Fire: Nikos Stavroulakis and Rabbi Mizan read from the Torah during a visit to the Etz Hayyim synagogue by members of the Salonika and Athens communities on February 6. Image by COURTESY OF ETZ HAYYIM SYNAGOGUE 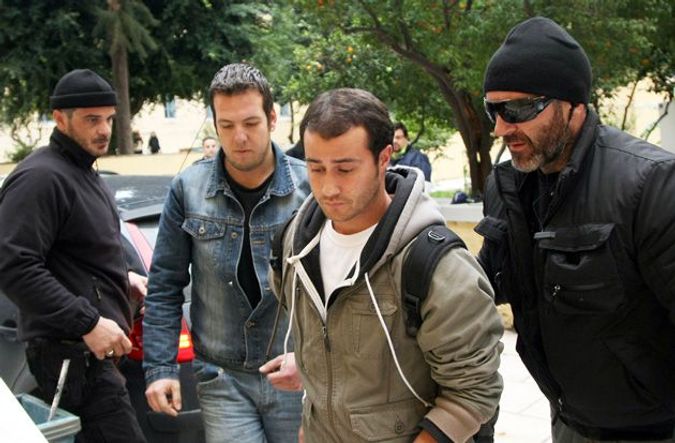 Arrests: An American citizen, foreground, and a Greek man, behind, are among the suspects arrested in two arson fires that severely damaged a synagogue on the island of Crete. Image by GETTY IMAGES

For decades after its Jews were rounded up and deported in 1944, Etz Hayyim in Hania, the only synagogue on this Aegean island, served as an informal rubbish dump. Little was left but the floor and walls when Nikos Stavroulakis began a long process of reclamation and reconstruction. Stavroulakis, founder of the Jewish Museum of Greece, located in Athens, had decided to return to Crete; once there, he felt the 14th-century synagogue “calling out to him.” Thanks to his tireless fundraising, adept bureaucratic negotiations and superbly restrained aesthetics, Etz Hayyim was rededicated in 1999, an island of Ottoman authenticity in the vast, generic sea of the Greek tourism industry.

Then, on January 5, arsonists scaled the synagogue’s ancient walls, crafted an incendiary device and filled the building with black, belching smoke. 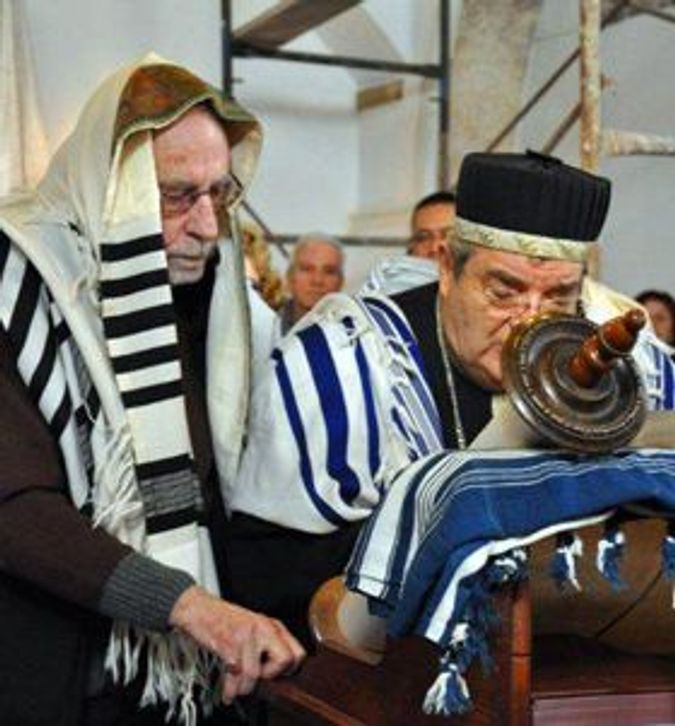 After the Fire: Nikos Stavroulakis and Rabbi Mizan read from the Torah during a visit to the Etz Hayyim synagogue by members of the Salonika and Athens communities on February 6. Image by COURTESY OF ETZ HAYYIM SYNAGOGUE

It felt surreal. Greece has never been philosemitic, but here in Hania, so picturesque that it feels like a film set, this display of vicious ignorance seemed dissonant. Etz Hayyim, a little stone building with a cat dozing in the sun-splashed courtyard, rickety wooden tables and chairs tucked beneath the shade of a twisted olive tree — how could this have provoked the rage of anyone?

In the days that followed, news of the burning of the synagogue flew around online, but the response in Hania was muted. Some neighbors complained that the fire sirens had kept them up at night; others said nothing. Yannis Pietra and Besnik Seitas, both Albanian immigrants, along with Nasr Allasoud, a Moroccan, were the only neighbors who responded. One had first smelled smoke and called the fire brigade; the others had rushed to help put out the flames and assist with rebuilding. This is but one of the many ways in which the story of Etz Hayyim — arson included — complicates assumptions.

Stavroulakis decided “to start work immediately,” and by 9:30 on the very morning of the fire, he had brought in carpenters and plasterers, an ironworker and an electrician. The marble floor was polished, the woodwork rubbed with lavender oil. The antique Ottoman carpets were sent off for cleaning. After a difficult 10 days, on the night of Friday, January 15, the synagogue’s small interfaith congregation met for Sabbath prayers and Kiddush. Afterward, “we locked the synagogue and returned to our homes, feeling that we had set our steps forward,” Stavroulakis recounted.

But no. At 4 a.m. on January 16, Etz Hayyim was again set alight, this time with far more devastating results. The first fire caused extensive cosmetic damage, and destroyed a wooden internal staircase leading to the ezrat nashim, the traditional women’s section, of which restoration had been painstakingly completed just last year. This one decimated the synagogue’s office, which contained all of Etz Hayyim’s records and technical equipment, and its library, home to more than 1,800 rare books written in Greek, Hebrew and English, along with its collection of Sephardic and liturgical music. Rare books on Ottoman, Byzantine and Jewish art and architecture, as well as on Balkan, Cretan and Ottoman history and several texts of the Zohar and Rashi, along with concordances and Mishnayot, all were destroyed.

The target of these calculated attacks? A synagogue that is explicitly dedicated to interfaith dialogue and reconciliation. Stavroulakis — the lone Cretan Jew in the congregation — oversees a house of prayer that has been dedicated to the memory of Crete’s Jews, victims of the Holocaust, but also to the island’s multicultural history. In negotiating the synagogue’s constitution in 2009, Stavroulakis had to earnestly explain to a delegation from the Central Board of Jewish Communities, in Athens, why the synagogue’s bylaws should make friendly reference to other religions. “I want it to be a synagogue that remembers that there were once Muslims on this island,” he explained.

Openness and ecumenism are what Etz Hayyim is all about: The synagogue publishes an annual interfaith calendar — with all text in Hebrew, English, Greek and Arabic — that includes the holy days of Islam and Christianity alongside those of Judaism. Its publications on Sephardic and Mediterranean Judaism make generous reference to the multiple interactions and influences of other religions on Greek Jewish history. It welcomes all comers.

And Stavroulakis bridles at the idea that in the wake of this attack, any of this should be different: “The character of this synagogue must not change, and the doors must remain open.” As you step through the gate, no one will check your bag, or put you through a metal detector, or even ask your name. That this should seem “abnormal” is sad testament to how distorted our lenses have become.

After the second attack, even the more indifferent members of Hanioti society woke up and took note. An online petition condemning the attacks was widely circulated. Greek American groups and the Greek Orthodox Church leadership, among many others, spoke out.

But here, the story took another unexpected turn: On January 23, the Hania police announced the arrests of three men: a 24-year old Greek from the Cretan city of Herakleion, and two British citizens, one 23 and the other 33. An American of Greek descent was apprehended; another American remains at large. This international fivesome — led, it is alleged, by the older British man — was responsible for both attacks. The Greek man had confessed, implicating the others. But for the missing American, all have now been arraigned, though all save the older British man are now free on bail. And all except the Greek man deny their involvement. The men had been captured on surveillance cameras from a nearby cafe.

In the 16th century, the island’s most famous Jewish leader was Eliyahu Kapsali, whose copious writings are a valuable source for island life in the period. Kapsali recounted that Purim of 1545 was difficult, with merry-making giving way to dangerous pranks. The “lads” of the synagogue had the “bad habit” of setting off “torches of fire” during the service, “until such a point that the reader is scared, and surrounded with flames of fire, to the extent that in many cases he stops reading, and runs away from the lectern.” More ominously, the synagogue’s open doors made it possible for some with evil intent to enter and take advantage of the chaos: “There are also gentiles who come and join in with the Jewish lads, and their purposes are bad and not good, for they throw their rockets of flame as if they were shooting it in order to strike a Jew.”

And now, some four and a half centuries later, a Cretan synagogue must again battle flames, and fight against those whose “purposes are bad.” So bad that they warrant their own Purim: In the wake of the Etz Hayyim attacks, Stavroulakis has announced that the date of the first attack will be annually commemorated on the Sixth of Shevat as a special Hania Purim. And yes, the doors will be open — to all.

K.E. Fleming is professor of history at New York University and the author, most recently, of “Greece — A Jewish History” (Princeton University Press, 2009).

Arson Attack on a Synagogue of Peace