Can the Jewish Deli Survive the Sustainable Food Movement? Pass The Homemade Pickles 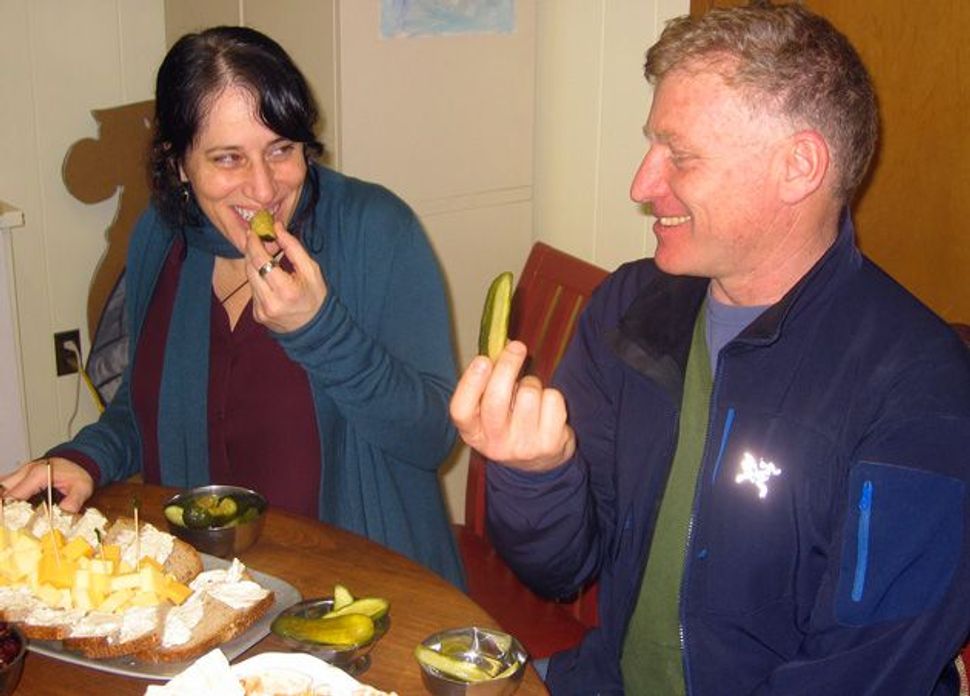 If you’re trying to defend the Jewish deli to a roomful of locavores and food activists, it’s good to have Michael Pollan on your side.

The Berkeley, Calif.-based author of the 2006 book “The Omnivore’s Dilemma” — often referred to as the bible of the sustainable food movement — was on hand February 9 for a panel discussion at the city’s Jewish community center that was billed as a referendum on the future of the Jewish deli.

At issue was whether the famously fatty, gloriously schmaltz-laden cuisine of the Ashkenazic bubbe can mind-meld with the rarefied sensibilities of the Bay Area foodie. More specifically, can a Jewish deli worthy of the name commit to seasonal menus, regional produce and locally sourced meats without sending customers screaming for the door?

Sure, the panelists declared. But they’d had their minds made up before the evening started: This wasn’t so much a referendum as a putsch.

Leading the charge were Karen Adelman and Peter Levitt, co-owners of Saul’s Deli, a kosher-style Jewish deli down the block from Chez Panisse, über-chef Alice Water’s famed eatery, the birthplace of California cuisine, and the place where Levitt got his training.

Adelman and Levitt’s position is clear: What American Jews think of as the authentic Jewish deli is an ossified construct based on post-World War II ideals of abundance that had little to do with how Jews ate in early 20th-century New York, let alone in the Old World.

That mile-high, fatty pastrami sandwich served at Katz’s or the Carnegie Deli? American, not Jewish, they say. Jewish cooking a century ago was all about thrift, seasonality and resourcefulness. Every part of the animal was used; portions were small; tomatoes were served in summer, and beets in winter.

Today’s customers want everything on the menu year-round; if they don’t get it, Levitt said, “they complain it isn’t a ‘real’ Jewish deli.”

“‘Authentic’ is a moving target,” Adelman added, pointing out how Jewish cuisine in this country has developed with each new immigration wave. “What we’re arguing is, we’re more authentic. What’s authentic about mass-produced food and giant menus?”

On the other hand, she said, food memories are a huge part of culture and identity. Deli food is Jewish comfort food. When Adelman announced plans for this evening’s panel, her mother sent her a worried email, begging her not to mess with tradition.

Walking in the front door of Saul’s Deli, one wouldn’t think they’re messing with tradition. There is pastrami and corned beef, smoked fish in the display case, celery soda on the menu and a dish of pickles on every table.

But the meat is local and grass-fed. The fish comes only from sustainable farms.The half-sour pickles are made locally from cucumber farmers Levitt chose personally. And, most heretical of all, the celery soda is homemade.

A Jewish deli that doesn’t serve Dr. Brown’s Cel-Ray? Customers grumbled two years ago when Saul’s made the switch, but Levitt and Adelman stuck to their guns. Jewish delis always used to make their own soda, they pointed out, along with pastrami, salami and kishkes. Today, most delis buy those items boxed, bottled or frozen. So who’s more authentic?

“There was a time when Dr. Brown’s had the best soda in New York,” Levitt said. “It was the city’s de facto Jewish deli drink. Now the company is owned by Pepsi-Cola, and ConAgra Foods owns Hebrew National. The names we know are owned by industrial manufacturers.”

Integrating sustainable food values into the Jewish deli menu may fly in Berkeley, where folks are willing to pay for food they feel good about politically. But there’s a trade-off.

“Meat was produced differently 50 years ago, and to get back to that way of doing things costs a lot of money,” Pollan told the crowd.

That’s true, Levitt admitted: Industrial-grade beef costs about $2 a pound, while he pays $6 a pound for his grass-fed beef. Given that most delis operate so close to the margin anyway, how likely is it that other Jewish delis will embrace such sustainable practices on a national scale?

Not very, experts agree. Not until more customers demand it.

“There’s no reason why a Jewish deli can’t be sustainable,” argues David Sax, author of the 2009 book “Save the Deli.”

Still, most deli owners are tied to the old model, even though that model doesn’t seem to be working. Jewish delis are going out of business nationwide: New York City, which boasted about 5,000 Jewish delis in the early 1950s, now has a mere two dozen, according to Sax.

He counts the number of new Jewish delis committed to sustainability on one hand: Kenny & Zuke’s in Portland, Ore., Kaplansky’s in Toronto and Mile End in Brooklyn’s Boerum Hill neighborhood, which opened January 25.

It’s no coincidence that the owners of all three are in their 20s and early 30s. The debate turns largely on generational lines. “There’s growing awareness among younger deli owners that this is important to a new generation of deli customers,” he says.

Chef and cookbook author Joan Nathan believes that sustainability is not a fad among American consumers. “It’s here to stay,” she said. “We’re much more cognizant of what we’re eating and where it comes from.”

As the public becomes more educated, restaurants will have to adapt if they want to survive. That’s hard for delis, because of the nostalgia factor. “The question is, are delis part of that future?” she asked. “I don’t know.”

Back at the Berkeley JCC, 80-year-old Max Cooperstein stayed in his seat for a few minutes after the discussion, reflecting. He grew up in Philadelphia and spent plenty of time at Jewish delis. The evening brought it all back.

“I grew up on chicken necks, kishke, all the stuff that clogs your arteries,” he reminisced, pushing his cap back on his head and smiling at the memory. “And I was a victim of it — I’m a cardiac patient. Now I eat lunch at the salad bar at Whole Foods.”

“Life is about change,” chimed in Bonnie, his wife and deli-eating partner of 56 years. “If we don’t change, we don’t grow.”

Can the Jewish Deli Survive the Sustainable Food Movement? Pass The Homemade Pickles